The Untold Story of the U.N. Environment Program

The United Nations’ environmental authority has labored in relative obscurity from its base in Nairobi, Kenya for nearly 50 years. A recent book, The Untold Story of the World’s Leading Environmental Institution: UNEP at Fifty, charts the challenges and successes of the UN Environment Program and looks ahead to the next half century. Author Maria Ivanova joins Host Steve Curwood to talk about UNEP’s creation, its longest-serving director, and how it brought nations together on the ozone hole and marine pollution.

The United Nations’ highest environmental honor went to an inspiring all-female cohort this year. The “Champions of the Earth” award from the United Nations Environment Program recognizes heroes for their impact and leadership in protecting people and planet. The 2021 recipients include two women from Uganda and Kyrgyzstan as well as a group of indigenous women from Papua New Guinea and the Solomon Islands known as the Sea Women of Melanesia. And Prime Minister Mia Mottley of Barbados was honored for her “powerful voice” for a sustainable world.

CURWOOD: We will have more about these inspirational voices in subsequent programs, but today we turn our attention to the United Nations Environment Program itself, the agency that makes these awards, and which often labors in obscurity from its base in Nairobi, Kenya. The Global South is the region of our planet that has long struggled for its voices to be heard on the issues of economics, health, pollution and most fervently, climate change, a crisis which it has done little to cause. Professor Maria Ivanova of the University of Massachusetts Boston McCormack Graduate School has written about the United Nations Environment Program. Her 2021 book is called The Untold Story of the World’s Leading Environmental Institution: UNEP at Fifty, and she spoke with us during a live Living on Earth Book Club event. Ironically, she notes, the United Nations Environment Program got its start in grassroots organizing that included the US. 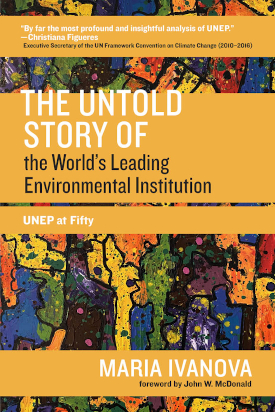 UNEP turns 50 in 2022, and Maria Ivanova’s book celebrates its successes and makes a case for how it can be effective in the next half century. (Image: The MIT Press)

IVANOVA: UNEP's creation was indeed a function of this country, the United States, taking leadership as a result of Earth Day, 50 years ago, when 20% of the population of this country spilled into the streets and demanded different response from its government. And it led to the creation of the institutions that we know in the United States: the Environmental Protection Agency, the various laws, Clean Air Act, Clean Water Act, the Endangered Species Act. And then this country went to the international community and argued that we can't solve the problems alone. And for that, we need an international institution. That's how UNEP was born. And yet, as you say, 50 years on, not everybody knows about the UN Environment Program, while perhaps everybody should. So why don't we know about it? And there are various theories, one of which is perhaps we should think of which international institutions are known. We hear the World Bank, IMF; why do we know about them? Because they're controversial. We hear the arguments against them, about not necessarily all the positive impacts that they're doing. And UNEP has not been in that sphere, has not been that controversial. But maybe also, because the governments that have given funding have not really put it as the priority. The United States has not really propelled UNEP's visibility forward.

CURWOOD: Well, that's right, Maria. To what extent though, has the United Nations Environment Program or UNEP been hiding its light under a bushel? And what I'm thinking about actually, is geography. You know, so many of those active organizations that you mentioned, or highly recognized organizations, are in Geneva, or they're in New York. And typically, for international diplomacy, the world does not go to Nairobi. What impact do you think that has had? 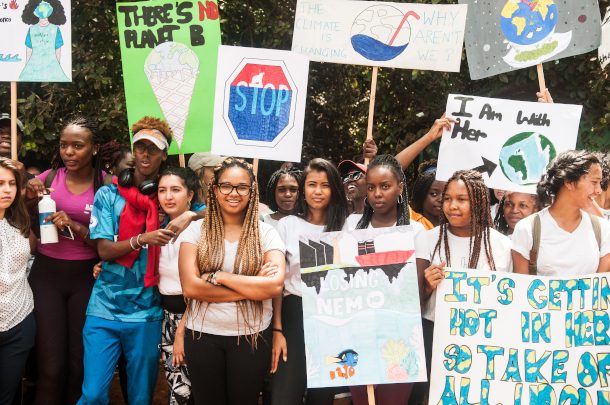 Youth gather in Karura forest in Nairobi in solidarity with the global climate youth marches on March 15, 2019. (Photo: UNEP)

IVANOVA: Connectivity is a really important issue. Look at where we are now. Look, what we're doing -- without connectivity, we could have none of this, of this discussion! We have been grounded; the entire world has been grounded. And yet, we're perhaps most connected than ever, because of this ability. But if we think about it, Steve, this is recent. So, you're right: when UNEP was established in Nairobi, this was radical. It was very radical in 1972, to create an international institution in a developing country. And so, I argue in the book that the location in Nairobi has had an impact on UNEP, a profound impact on the organization. But also, the organization has had a profound impact on its host community, on its host country. And connectivity, indeed, has been a challenge. But it has also been the impetus behind Kenya developing its technological might. And Kenya now is one of the hubs in Africa, of connectivity, of high-tech development.

CURWOOD: Let's talk about some of the successes that UNEP, the United Nations Environment Program, has had everything from the oceans to ozone, those two come to mind for me. 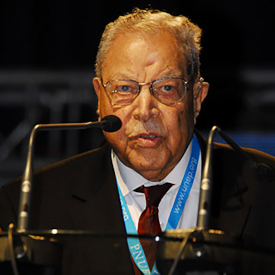 IVANOVA: Yes, so UNEP did begin with a vision of how do we bring countries together to solve these problems that no one country can solve by themselves? And so marine policy is one of the issues that was first on the agenda. And that was the Mediterranean action plan. And so, if you imagine the Mediterranean, the late 1960s, early 70s, a lot of countries with very different agendas, who are basically polluting the sea by just doing their normal economic activities, but all of the outputs, or outflow, going into the sea. And if you imagine the Mediterranean, its water does not turn around very easily. And so, UNEP brought countries together. And so, when you have Israel and Palestine, and Egypt, and France and Italy, and Greece and Turkey, sit around the same table and have a conversation about a common natural resource that they share, and how to work to resolve these issues, it was radical. That is a clear success of the UN Environment Program. And it's often referred to as the crown jewel, the Mediterranean Action Plan. And then UNEP tried to repeat this in other issues, and you're absolutely right. Ozone is perhaps the only global environmental issue that we have resolved, and the reasons that we often give as scholars are the institutions, and the fact that the United States had a business, DuPont, that came to figure out substitutes, and it pushed for an agreement. But what I tell in the book in some detail was the importance of the leadership, of UNEP as an institution, and of its director at the time, Mostafa Tolba, as the individual.

CURWOOD: Yeah, what was his secret sauce? What was Mostafa Tolba's secret sauce? And you might start by talking about a little bit of his history, where he was from, because as you mention, in particular, back in the Mediterranean story, it's not exactly the, you know, it's not free of contention, to put it mildly. 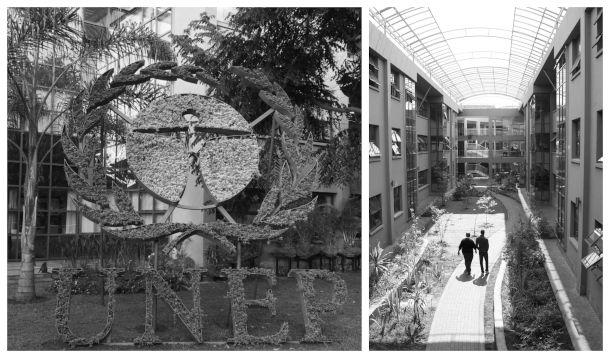 The eco-friendly headquarters of UNEP and UN-Habitat in Nairobi. (Photo: Maria Ivanova and UNEP)

IVANOVA: [LAUGHS] Nothing is free of contention, indeed! So, Mostafa Tolba was the executive director of UNEP, from 1976 to 1993, the longest serving executive director, 17 years. And he had a turn around, he had a come around moment, because he said that he went to Stockholm fully convinced that the environment was a ruse from the developed north to keep the south from development. And he, he said, look, in the Egyptian pound, we have a smokestack. That is the symbol of industrialization, of progress: it's pollution. And yet, he said that the whole Stockholm conference really did lead him to come around and see that the environment was the foundation.

CURWOOD: So of course, you chronicle successes, and then there have been some things that haven't been quite as successful. How do you think UNEP, was able to come through this and… and to survive and thrive as well as it has? 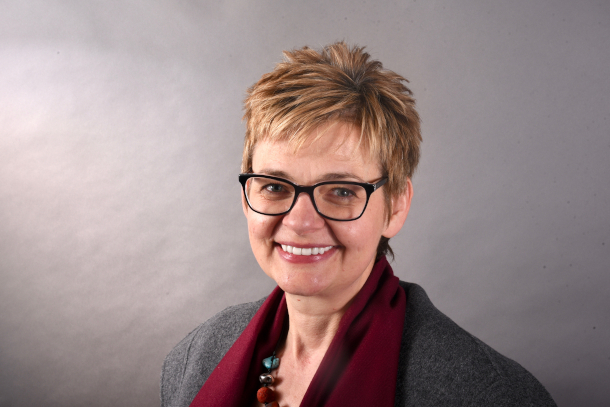 Maria Ivanova is Associate Professor of Global Governance and Director of the Center for Governance and Sustainability at the John W. McCormack Graduate School of Policy and Global Studies at the University of Massachusetts Boston. Ivanova is also a visiting scholar at the Center for Collective Intelligence at MIT. (Photo: Courtesy of Maria Ivanova)

IVANOVA: You're right, it was very difficult for a very small UN body, tucked away in, in Nairobi to have the impact that it was envisioned to have. But also, Steve, UNEP was successful: in naming the issues, bringing the science to the fore, of saying, we need to collaborate and create certain policies and structures, the conventions or as we also know, the multilateral environmental agreements. And I think that now, with connectivity, how that has improved, also of us seeing how important the environment is to basically every aspect of human life, I do think at its 50th now, UNEP has a real chance of reinventing itself, of reimagining itself, of reconfiguring itself to being the institution that it was designed to be.

More about the book from the MIT Press

About the UN Environment Programme, UNEP

Interactive map of UNEP offices around the world