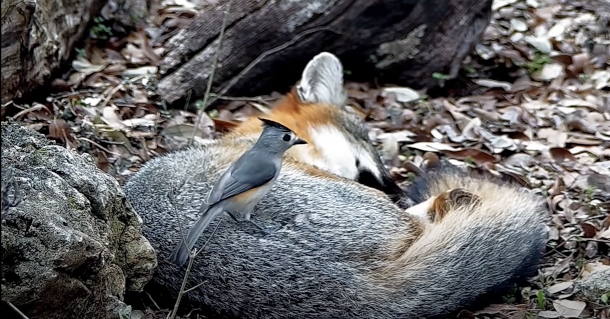 Dozens of YouTube videos show daring little birds pulling hair right out of sleeping dogs and other mammals, but only recently have scientists become interested in this phenomenon. They’ve coined a new word for it: “kleptotrichy”, from the Greek words meaning “to steal” and “hair”. Living on Earth’s Don Lyman reports on why scientists think titmice, crows, and starlings engage in this risky behavior.

BASCOMB: Just ahead, YouTube influencers raise money to clean up the oceans but first this Note on Emerging Science from Don Lyman.

LYMAN: Many birdwatchers, citizen scientists, and dog owners have observed birds stealing hair from mammals for some time. In fact, there are dozens of YouTube videos of daring birds pulling hair from sleeping dogs but only recently have scientists become interested in this phenomenon.
Ecologist Henry Pollock was counting birds in an Illinois state park when he and his colleagues saw a tufted titmouse plucking fur from a sleeping raccoon. That observation inspired him to dig deeper into the phenomenon, which researchers have named kleptotrichy, a term derived from the Greek words “to steal” and “hair”.
Searching through the scientific literature, researchers found only 11 anecdotes of birds stealing hair from live mammals. But a YouTube search revealed nearly 100 videos of tufted titmice, a mountain chickadee, and a black-crested titmouse plucking hair from mammals. The latter two bird species had not previously been identified as hair thieves in the scientific literature.
Titmice are the bird species most often seen engaging in kleptotrichy, stealing hair from dogs, foxes, and raccoons, but American crows, red-winged starlings in Africa, and three honeybird species in Australia have also been documented stealing hair from a variety of animals, including cows, antelope, and koalas.
Scientists assumed birds gathered hair for their nests in low-risk ways, perhaps from carcasses or shed hair. Collecting hair from live animals, some of them predators, like foxes, is an obvious risk to birds. So, researchers conclude, the hair must be critically important for them.
Species of birds that harvest hair often live in colder climates, so researchers speculate the birds might use it to insulate their nests. Another hypothesis is that birds might put mammal hair in their nests to confuse potential predators and parasites.


Find the journal article in Ecology | “What The Pluck? The Theft Of Mammal Hair By Birds Is An Overlooked But Common Behavior With Fitness Implications”