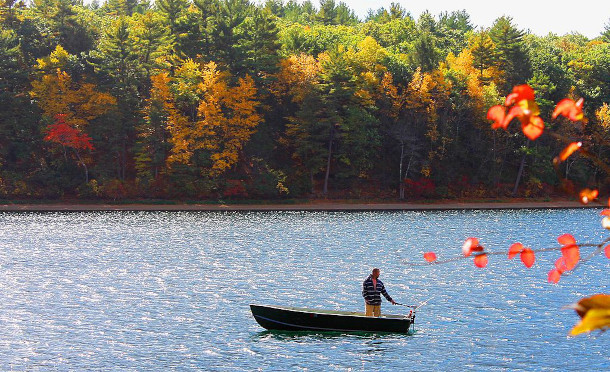 This week, Host Steve Curwood talks with Peter Dykstra, an editor at Environmental Health News, about the far-reaching consequences of climate disasters for many Americans. They also discuss the slow progress in replacing lead-contaminated pipes that provide drinking water to many homes in the Chicago area. Looking back in history, 30 years ago in September 1991 a developer dropped plans to develop Walden Woods as an office park, thanks to pressure from Don Henley of The Eagles and others.

CURWOOD: Well, it's time for us to take a look Beyond the Headlines now with Peter Dykstra. Peter is an editor with Environmental Health News that's ehn.org and DailyClimate.org. On the line now from Atlanta, Georgia. Hi there Peter, what do you have for us today?

DYKSTRA: Well, hi, Steve. We just read about an analysis done by the Washington Post, who tallied up that one in three Americans live in a county that experienced a weather disaster this year.

CURWOOD: I'm surprised that number is so low. It feels like we've all been hit by crazy weather this summer.

DYKSTRA: Well, yeah, and if you run through the list of things that we've often called natural disasters, but now we know that they are at least influenced by climate change, and are, therefore, at least partly man-made disasters. You've got Hurricane Ida and other storms. Ida is doing terrible damage in Louisiana, then causing flooding up through the Northeast. If you go west, it's not rain, but drought in so many places. Those droughts helped inspire another climate calamity in wildfires. And that wildfire smoke is almost in every corner of the country; drifting all the way to the east coast, causing serious air pollution problems in cities like Denver, which has been lucky enough not to have any huge wildfires this year. But they still have the impact.

CURWOOD: And I think almost everywhere in the east, you haven't been able to see stars at night because there's so much smoke in the air. Hey, what else do you have for us today?

DYKSTRA: Mayor Lori Lightfoot set a goal this year for Chicago to replace 650 toxic lead pipes leading into homes; part of the nationwide scandal about lead pipe drinking water. So far out of those 650, according to the Chicago Tribune's Michael Hawthorne, they've removed three. And not only is three out of 650 a pretty lousy performance by any standard, those 650 were very modest goals to begin with because Chicago has an estimated 400,000 lead-contaminated pipes leading to residences throughout the city. 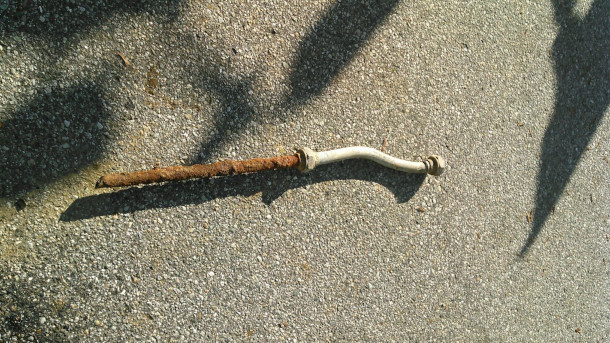 A lead gooseneck pipe that is typically found in old infrastructure. Without being replaced these pipes contaminate drinking water, making the it toxic and unsafe to consume. (Photo: Courtesy of Office of Ground Water and Drinking Water, United States Environmental Protection Agency)

DYKSTRA: There are other cities doing a much better job suggesting that Chicago could be doing a better job as well. There are cities like Detroit with the same aging infrastructure, and Denver a little bit smaller, a little bit newer. They are doing the pipe removal for half the price Chicago says, and they've already replaced thousands, not three. Chicago, if they do that four a year which of course is ridiculous, but if that pace remains, even the Chicago Cubs will have won another World Series before the pipes are clean.

CURWOOD: Alright, let's take a look, now, back in history for a moment, and tell me what you see. 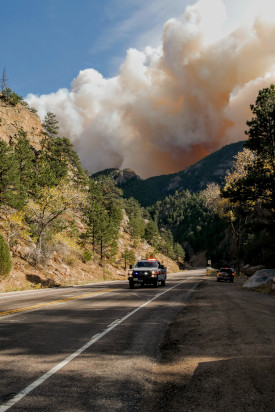 The Calwood wildfire in Colorado shows the massive smoke plumes that can eventually spread across states. (Photo: Malachi Brooks on Unsplash)

DYKSTRA: 30th anniversary, September 17th, 1991, the millionaire developer and publisher, Mortimer Zuckerman, who became too many environmentalists a real villain by financing a proposed office park not far from the edge of the Walden Woods and within view of Henry David Thoreau's cherished Walden Pond; the inspiration for one of the first seminal environmental books in our nation's history. On September 17th, '91, due to pressure from environmental groups led by Don Henley, the drummer for the Eagles, Zuckerman threw in the towel, pulling out his money, effectively ending the threat to Walden Pond and Walden Woods.

CURWOOD: We can thank rock'n'roll for helping to save this eco icon for us.

DYKSTRA: That's right. Don Henley and many, many other people scored a victory for Henry David Thoreau's legacy.

CURWOOD: All right, Peter, thank you so much. Peter Dykstra is an editor with Environmental Health News that's ehn.org and DailyClimate.org. We'll talk to you again real soon.

CURWOOD: And there's more on these stories on the Living on Earth web page, that's loe.org.

Chicago Tribune | “Mayor Lori Lightfoot Set A Goal To Replace 650 Toxic Lead Pipes In Chicago In 2021. So Far, 3 Have Been Removed.”