Ancient Underwater Forest in the Gulf of Mexico 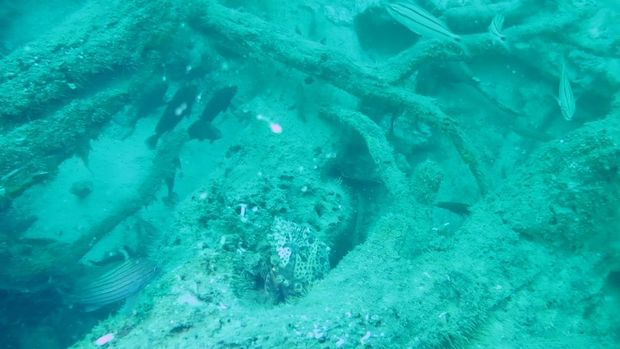 Sixty feet beneath the waters off the Gulf coast of Alabama lies a forest of cypress stumps more than 50,000 years old. Ben Raines tells Host Steve Curwood what it’s like to scuba dive among the remains of ancient trees.

And now let's head under the sea in search of a long-lost forest. Deep beneath the surface of the Gulf of Mexico, off the Alabama coast, lie ancient cypress trees that only a handful of people have ever seen. One of those lucky few is Ben Raines, director of the Weeks Bay Foundation* and he explained how it all came about.

RAINES: For many years I was the environment reporter for the paper down here, The Press-Register, and so I had a buddy who owned a scuba diving shop, and he used to taunt me with this tale of an underwater forest that he had been diving on one time, and I pestered him for years and years and years, and he finally agreed to take me out there.

He heard about it from a fisherman who just noticed a ledge on his bottom machine as he was riding across the gulf. So he started fishing there and catching a lot of Red Snapper. And he gave the numbers, the GPS coordinates, to my buddy that owns the dive shop and asked him to go out there and see what it was. He hit the bottom and said there’s a bunch of trees.

CURWOOD: Now how deep is deep for an underwater forest?

RAINES: Well, this is about 60 feet. Of course, all over the Earth, we know sea levels have gone down hundreds of feet. So we have a delta, a river delta here. Further up in the delta, about 80 miles inland, there’s sand dollars all over in these limestone bluffs. So we know sea level was that high at one time. Now we’ve got these trees 60 feet underwater, so sea level was that low, and it’s just a fascinating push and pull of the ocean through the climatic change over the eons. 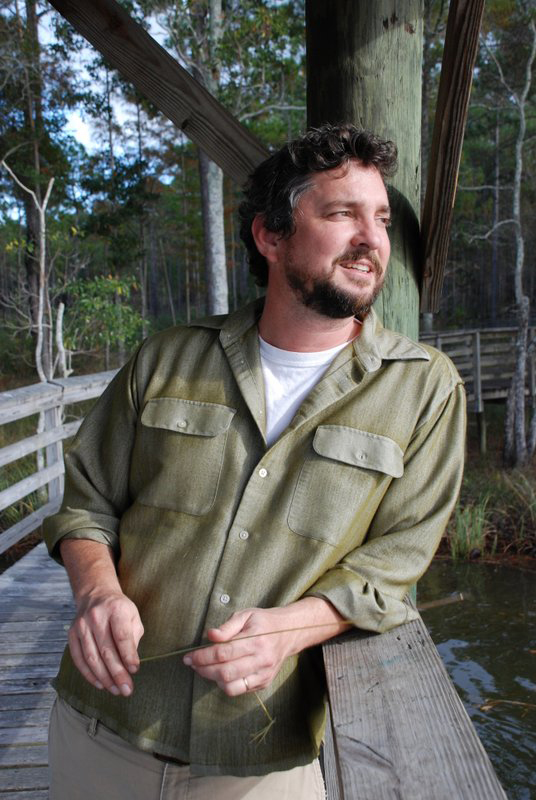 CURWOOD: So when did you finally get to visit the forest?

CURWOOD: Of course. Boats always break down, don’t they?

RAINES: So we finally made it out there and the way we dive here, we’ll drop the anchor over whatever the GPS number is. And then we swim down the anchor line to get to the spot because the water’s a little murky - otherwise you get lost. I went down the anchor line, and when I hit the bottom, there it was. The first stump. And it was about as big around as a garbage can lid, but it had that very distinctive irregular shape that a Cypress trunk has….

RAINES: …and then it was surrounded by knees. You know, Cypress trees have knees - you see them in the swamps - that stick up out of the water to kind of help hold them in place, and here was a Cypress tree on the bottom of the ocean. And I swam a few feet, and there was another one, and a few feet more, another one, and I quickly realized they were all around me in every direction. 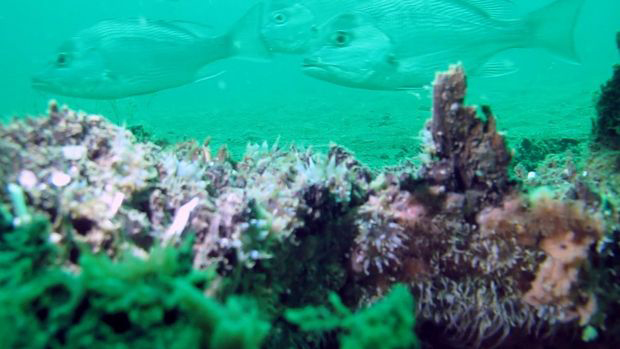 CURWOOD: Wow. I mean, this sounds almost magical down there.

RAINES: It is absolutely magical. It’s totally enchanting. You know, these trees are covered in anemones and crabs and shrimp - and then you have these huge clouds of Red Snapper and Grouper following you around. I was down there one day swimming along the ledge where the biggest stumps are, and I turned around and there was this huge funnel shape of fish behind me, I mean it must have been 200 Snapper, and they were just following me around. When I stopped, they would stop. When I turned around, they all fell in behind me.

CURWOOD: [LAUGHS] What about the Groupers? They’re very social.

RAINES: Oh, yes. They’ll come right up to you. And some of the fish that are down there, the trigger fish, will actually come up and chew on your camera. You have to shoo them away. They just seem to have no fear. 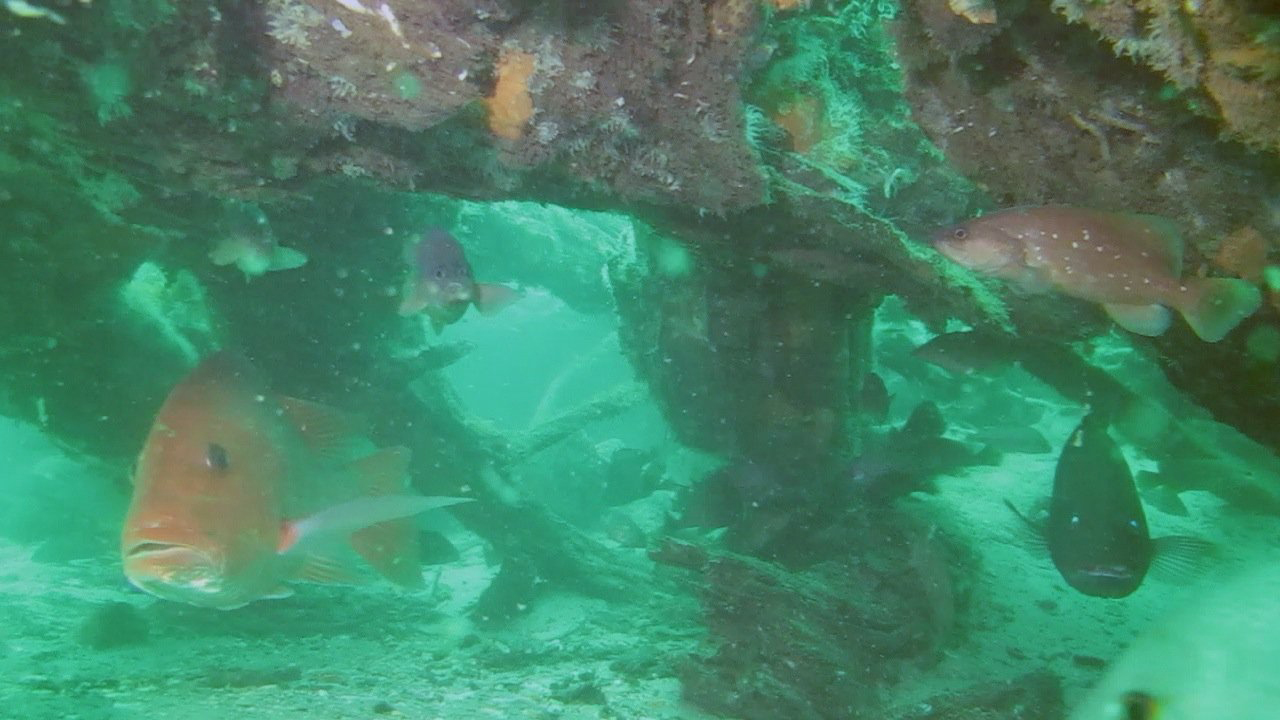 Fish hide in and among the roots of the trees (photo: Ben Raines/Alabama Press Register)

CURWOOD: You must have had a lot of fun because we saw this video that you made of your dive down there, and we’ll put it on our website. But have you experienced anything like that before?

RAINES: You know, I never had. I’ve been diving for some time, and from the moment I hit the bottom and saw the stumps, it was just exhilarating. You knew you were in this sort of “land of the lost”, this place that shouldn’t exist, but here it was, and I got the camera out, I hit the record button, and I never turned it off, and that’s exactly what I’ve done every dive I’ve made down there. And now I’ve been going down there with three cameras, you know, setting them up in different locations just to kind of capture this place while it’s there, because if we get a storm, it could theoretically come into the Gulf and change everything out there and bury this place up again. You know, it may be a very ephemeral place. We may only get to see it for a little while.

CURWOOD: So how old do scientists think these trees are?

RAINES: Well, I brought a few samples up, and I actually took a hand saw down there with me and cut them just like you’d cut a tree in your backyard. So I cut some sections out of them, gave them to Christine DeLong at LSU, and she had them radio carbon dated, and they had to do them three times in all I think because they didn’t believe the results. So they expected them to be 12,000 years old, which was the last ice age. Instead they came back radio carbon dead each time they tested them, which means they’re 50,000 years old or longer. So if we can...we want to get cores out of them, and then they’ll be able to count the rings and look at growth, and measure carbon inside them, things like that, and learn a lot about the past climate. We had another team come out from University of Southern Mississippi, and we had them do a sonar survey so we could try and get an extent of it because I’ve only been swimming around 300 yards of it. It turns out it’s spread close to a mile; it’s much larger than we thought, and there appear to be some much bigger stumps. I’m due to go over there next week again and see what we can - what we can ground truth some of those other locations, or sea floor truth them, I guess. 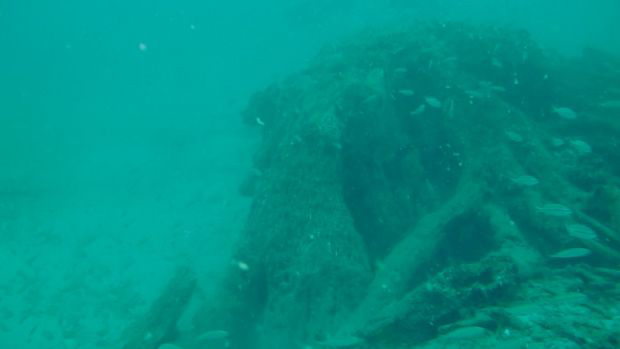 One of the many cypress stumps (photo: Ben Raines/Alabama Press Register)

CURWOOD: Hey, Ben, how did this happen? I mean, how could these trees be preserved for so long?

RAINES: Well, any time in the ocean or anywhere else you’re able to get oxygen out of the mix, you stop decomposition. All those little bacteria and things that decay - cause decay - need oxygen, and so buried under six inches, eight inches of sand, you get into this anoxic layer where there’s no more oxygen. So these trees were covered up. We think Hurricane Katrina came through and dug this trench where the trees are now exposed, and so on the top layer of them, of the stumps, that top layer you can break it apart with your fingers - you know it’s very soft, and there’s all kinds of boring organisms digging holes in them. But once you get inside about a half-inch or an inch, then the wood’s very hard, and it’s like cutting a tree down - a living tree. And in fact, with the samples I brought up, when you cut them up in the dry air, you actually smell the smell of the sap just like you were cutting a fresh Cypress tree down. It’s really remarkable.

CURWOOD: Now that these trees have been uncovered, how will they survive?

RAINES: Well, they won’t. Ultimately, they’ll decay just like any wood that’s been sitting on the bottom of the gulf. The fact that they’re Cypress, gives them a little more longevity than other wood. Cypress is a very tough, rot-resistant wood, and for that reason, people love to make boats out of it. So, I don’t know how many years they’ll last. I can tell they’re decaying. I’ve been visiting it now for a year. And so I’ve got all these groups and companies calling me wanting to mine the logs. There’s a phenomenon called “sinker logs” where old Cypress trees that were actually so dense they couldn’t float would sink to the bottom of rivers, and there are companies now that go around and salvage these things, and they’re worth quite a lot of money. So here we’ve got the ultimate sinker logs, you know, 50,000 year old wood. So my goal is to have the place preserved before the numbers get out - the GPS numbers - so that people can go dive there, but I want it protected so they can’t go carve up the logs. I don’t want Fender and Gibson to get ahold of them and start making 50,000 year old guitars or 50,000 year old coffee tables. I’d like to see this preserved and in this enchanted little environment where people can enjoy it.

CURWOOD: We first aired this story back in 2012 and the fight to protect Alabama’s underwater forest from business interests continues. Scientists and advocates have asked the Biden administration to designate the site a marine sanctuary.


Check out Ben's documentary about the cypress forest