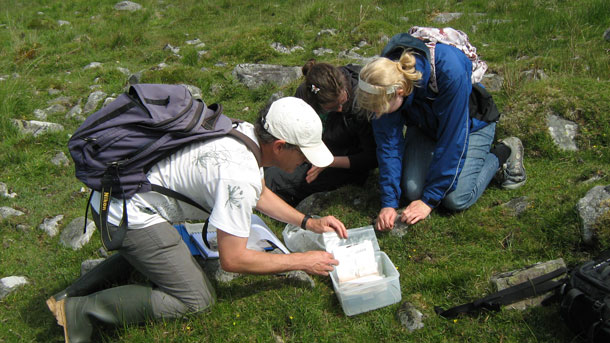 Samples of an organism’s genome are obtained in the field, before being brought back to the lab for the barcoding process. (Photo: Natasha de Vere & Col Ford, Barcode Wales, Flickr, CC BY 2.0)

Roughly 1.3 million species have been identified and recorded, but that’s just a fraction of life on our planet. A recent advancement known as DNA barcoding samples small but key parts of genomes to ID species. Paul Hebert, lead scientist at the International Barcode of Life Consortium, explains the process and what it could mean for cataloging biodiversity.

BASCOMB: From PRX and the Jennifer and Ted Stanley studios at the University of Massachusetts Boston, this is Living on Earth. I’m Bobby Bascomb.

Modern society has yet to record all the species on our planet but we do know that the 1.3 million we’ve registered so far represent just a tiny fraction of the abundant life on Earth. To make it easier to identify species, the International Barcode of Life Consortium is using a technique known as DNA barcoding. It can give a quick readout that tells whether a sampled organism is known to modern science, and if not provide a marker to register it as a newly discovered life form. Paul Hebert is the molecular biologist who developed DNA barcoding. Paul, welcome to Living on Earth.

CURWOOD: So, take us through the process of DNA barcoding. You find an organism you want to identify, and then?

HEBERT: Well, I mean, you might just touch it, would be the simplest thing, and pick up enough of its DNA. I suspect you wouldn't like me to do something more destructive with you, so, simply touch you and I would pick up enough DNA off your surface, any vertebrate. But in the case of smaller organisms, where we may be prepared to sacrifice them, and where we want to have a voucher specimen in a collection that we can look at, and photograph and analyze in other ways, we might remove a tiny piece of tissue. If it were an insect, six legs, remove one of those legs and extract the DNA from that. That's a fairly simple process. When you do that DNA extraction, of course, you get all of the DNA in the genome, in your case, it would be about 7 billion base pairs. In the case of an insect, it might be 500 million base pairs. And we just want to read 500 of them. And you can think of the whole genome as sort of a book of life. And we want to read just one of those pages. So to do that, we use the polymerase chain reaction, which basically Xerox copies a selected page in that much larger book of life. And that prepares us then, once we've got many copies of it, prepares us for doing the next stage, which is sequencing the DNA. And that delivers the barcode record.

CURWOOD: Now, when somebody identifies a species and generates that barcode using these techniques, where can that information go from there? And what can it do?

HEBERT: Well, I mean, of course, that was the first thing we saw coming, was a very large number of records. So, it was important to develop an informatics platform that's now been adopted by the global community. It's a platform called the Barcode of Life Data System, acronym 'BOLD'. And basically, all of the data from each individual specimen go into that database, together with an image of the specimen and where it was collected, and by whom; all of the details. And so, let's say you begin by sequencing an American Robin, next time you were to encounter a feather on your lawn that happened to derive from that bird species, you would get a connection to that reference sequence in the bar code library, in BOLD. Now, if it came from a bluejay, and there was no reference sequence in the library, you'd be in a bit of problem. But the idea is to build up this reference library, so it has representative sequences for every species on our planet. And that's what we're in the process of doing now.

CURWOOD: Now, of course, this is a very handy approach in academia with nice big laboratories. What about somebody who's in the field? How useful is this?

HEBERT: Well, you can go in the field, as we have recently, in Kruger National Park with the rangers in that park, who normally are involved in suppressing poaching of rhinoceroses, joined in a massive collection program that gathered up about a million specimens from that largest national park in South Africa. So they gathered the specimens, they worked in the field, did all the field work, and then they dispatched them to our core facility. And we then translated those specimens into barcode records and built a DNA barcode reference library for Kruger National Park. So that's one way you can do it. But in the future, it's going to be certain that you're going to be able to take a walk through the woods with your kids or your grandkids, and see an organism, and simply touch it, and from its DNA barcode sequence, gain its identity, and everything else that humanity knows about it. And we're heading there within the next 10 to 20 years for sure.

CURWOOD: What's your biggest surprise now, in this project? What have you found or what have other researchers found using DNA barcoding that we just never would have understood or been many, many years before we could understand? 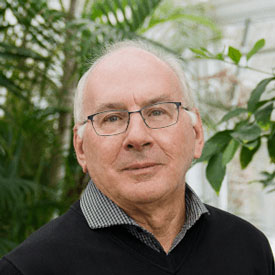 Paul D.N. Hebert is the Canadian biologist who developed the technique of DNA barcoding. (Photo: Courtesy of the International Barcode of Life Consortium)

CURWOOD: By the way, give me some examples of where DNA barcoding has found species in places where you just had no idea they were there.

HEBERT: Well, one of the earliest studies that we did in Costa Rica, involved a beautiful iridescent blue butterfly that for the last 200 years, has been regarded as a single species. Had one thing that was a bit unusual about it, it fed on an inordinate diversity of host plants. And when we barcoded that species, we found that in fact, it was 10 species, not one. There's a lot of hidden diversity, even within the large species that we share on this planet, when you move down to the small stuff, it's massive discovery.

CURWOOD: Now, the International Barcode of Life Consortium has this mission of identifying each and every species on Earth using barcoding. What is the ultimate goal of the project, do you think?

HEBERT: Yeah, well, I think there is this curiosity element. You know, we really do want to understand the diversity of life that... the planet, the organisms we share this planet with. However, that knowledge, creating that reference sequence library for all species on the planet, is going to place us in a position where it's going to be possible for us to set up global bio surveillance system. So we can track what humanity is doing to the other life forms. So, just like in the 19th century, we began to record weather. And we're now... have the information that supports global warming and change and it's leading to shifts in the way we power our society. We're taking adaptive actions to prevent further global warming. I see detailed information on the shifts in biodiversity that are happening on our planet, motivating humanity to take the action needed to do better. And I think the other major contribution will be setting aside all of these DNA extracts, so we can read the books of life at our leisure. Most species, when they go extinct, aren't like the dodo, where you could go and find bones 200 years later, or the mastodons. Most species when they become extinct, are a smudge on the forest floor for a day or two. And that book of life is gone. So I think humanity will be very grateful that we've preserved the books of life for reading, and hopefully have changed human behaviors so the species aren't just in a freezer. They're sharing the planet with us into the future.

CURWOOD: Paul Hebert is a molecular biologist at the University of Guelph in Canada, and science director of the International Barcode of Life Consortium. Thank you so much, Paul, for taking the time with us today.


The International Barcode of Life Consortium