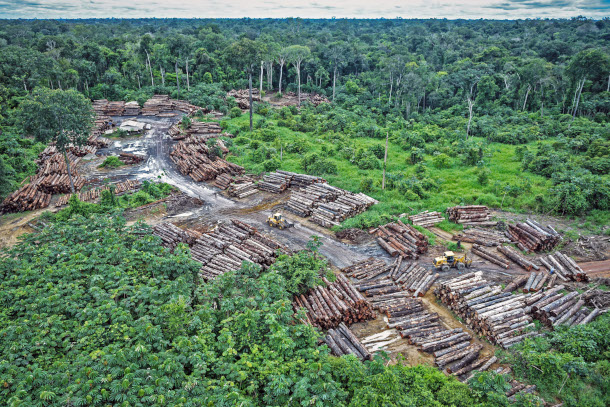 While laws exist to authorize logging in several areas of the Amazon, studies show that more than 80% of logging in the Amazon is illegal. (Photo: Felipe Werneck, IBAMA, Flickr AP, CC BY 2.0)

In the wake of a Federal Supreme Court ruling Brazil’s environment minister and nine other government officials are facing allegations of corruption, including profiting from illegal deforestation in the Amazon. Karla Mendes, contributing editor for Mongabay in Brazil, joins host Bobby Bascomb.

BASCOMB: And I’m Bobby Bascomb. Deforestation in the Amazon Rainforest is has surged to the highest rate in more than a decade. The spike in deforestation coincides with the tenure of Brazil’s president Jair Bolsonaro, who took office in 2019. Critics say President Bolsonaro’s policies and rhetoric have encouraged illegal deforestation in the heart of the rainforest, often in indigenous territories. And now 10 top environmental officials in Mr. Bolsonaro’s government have been named in a probe alleging corruption. Most notably, Ricardo Salles, Brazil’s environment minister, is under investigation for allegedly allowing the export of trees illegally harvested from the Amazon. The probe alleges a law firm in which Mr. Salles is a stakeholder profited from illegal sales to the tune of nearly 3 million dollars. For more, we turn now to Karla Mendes. She is the Brazil contributing editor for Mongabay and joins us from Rio de Janeiro. Welcome to Living on Earth Karla!

BASCOMB: Jair Bolsonaro will be up for re-election in October of 2022. Despite the environmental corruption charges leveled against members of his government and a parliamentary investigation aimed at Mr. Bolsonaro for his response to the Covid crisis, he still enjoys support from much of the Brazilian public.

MENDES: Thank you so much for this opportunity Bobby.

MENDES: This news made big headlines everywhere because the environment minister now has been investigated in a probe. He is being accused of illegal trafficking of timber. There are some very suspicious transactions involving a consultant firm where he is a stakeholder, he owns 50% of this. So there was a huge police raid last week doing search with search warrants in at his office and the office of 10 high rank environmental officials in Brazil, São Paulo and Praia state. And the other thing is that they're accused of issuing retroactively certificates to benefit companies that allowed the exports of illegal timber to the US and Europe for exports. 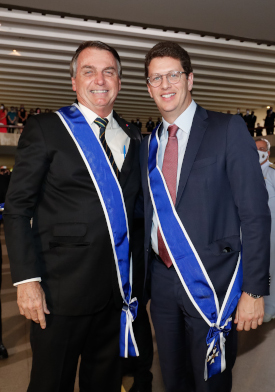 Environment minister Ricardo Salles (right) with President Jair Bolsonaro (left). Salles who is under investigation for involvement in the alleged illegal export of Amazon timber after a ruling by the Brazilian Federal Supreme Court. (Photo: Alan Santos, PR, Flickr AP, CC BY 2.0)

BASCOMB: So they basically made fake certificates and gave them to people that already cut down trees illegally and they profited from it.

MENDES: Yeah, yeah. The timber trade, that's something you know, I've done some investigations into this supply chain and it's huge. We hear about wrongdoing everywhere, laundry schemes, you know, bribery schemes at state level, federal levels. But this one is really huge, because it's targeting the men who are supposed to be defending our environment.

BASCOMB: And you mentioned that there are 10, high ranking environmental officials who were implicated in this case, one of them is Eduardo Bim. He's the head of IBAMA, which is Brazil's equivalent of the EPA. I mean, that's a big deal.

MENDES: Yeah no, it is. I mean, the environmental agency that was supposed to defend the environment. So you know, since Bolsonaro took office, they changed the high rank positions of all environmental institutions, putting militaries, police, you know, many cases, people that don't have any knowledge about the specifics of the environment. And the ones who are technicians who are there doing their job, they've been hampered of doing it, not talking to press. You know, so what we are seeing now is somehow a result of two years of the, what has been dubbed as the 'Bolsonaro Era'.

BASCOMB: Now, Ricardo Salas, he took office as the environment minister in January of 2019, which was shortly after he was convicted of illegally changing zoning laws to benefit mining companies. Do I have that right?

MENDES: Yeah, no, that's right. You know, it was very controversial his nomination, because you think how someone who has been just convicted for favoring companies that damage the environment to be the head of the environmental ministry. So from the beginning it was really suspicious. And then last year, a year ago, it was in April 2020, Ricardo Sales was famous as well, because there was a leaked video from a ministry meeting where he said- look, all the press is just thinking about COVID-19 covering this and let's do what we need to do to facilitate, to ease these environmental laws. That all these environmental laws kind of hamper development. So they said let's take advantage of this and pass everything we need. 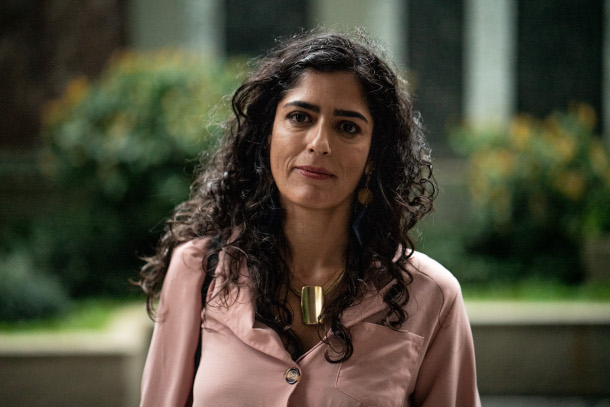 Karla Mendes is an award-winning Brazilian journalist working as a Rio de Janeiro-based Contributor Editor for Mongabay. She has been working as a correspondent for international outlets since 2015 and has specialized in covering environmental, land and property rights issues since 2017. (Photo: Fábio Nascimento)

BASCOMB: Now, Mr. Salas, was appointed to his office as Environment Minister by President Jair Bolsonaro of course. They both took office in 2019 and since then, deforestation in the Amazon has risen by roughly 50%. It's at its highest level in more than a decade. What's going on there? What kind of new rules have they put in place over the last two years that account for that dramatic increase?

MENDES: Yeah, no this is really huge. And it starts with their discourse that emboldens invasions of indigenous reserves. They position themselves against indigenous rights and they want to open up everything for development. I remember that two years ago just a few months after he took office, I was in the biggest indigenous gathering in Brasilia and I talked to many leaders and all of them they said that they saw a huge spike in land invasions since he took office only by his speech against them. And along these years, we saw several attempts to facilitate the destruction. He wants to open up indigenous people to mining and development projects. He tried to take the demarcation of indigenous reserves from the Ministry of Justice, where it has been for years and tried to put under the Ministry of Agriculture! Activists says it's like giving chicken to the foxes. So but then there was a huge, you know protest everywhere, international NGOs, activists, and this was hampered by the congress. And more recently, two weeks ago, many people said that Sales was right. They took advantage of COVID-19 to pass the things they wanted to do, because there was a huge inquiry, parliamentary inquiry into the COVID-19, accusing the government for lack of vaccines and all the things. They approved the bill that withdraws environmental impact assessment in licensing for development projects.

BASCOMB: If I understand you correctly, you're saying that the bill actually says we don't need to do environmental impact statements or any sort of assessment in the Amazon or in indigenous lands also before you do development? Is that right?

MENDES: Yeah, anywhere, anywhere, actually, because the current process occurs somewhat like this. There are several steps that a company, development projects should go through to be approved. So usually if they are indigenous people, traditional communities, you have to have either an environmental impact assessment ahead of the license to try to forecast the impact that could happen there, how to mitigate it, there are several phases. And this bill simply cuts everything and somehow relies on self licensing. Something that it's really, really insane. And so it was approved in the lower house, and now it was sent to the Senate. And it was hugely criticized by everyone who defends the environment. So if it is approved, I think that federal prosecutors, you know that there will be a legal battle because it's a huge setback. The situation was really bad already, imagine without that.

BASCOMB: Karla Mendes is the Brazil contributing editor for Mongabay. Karla, thank you so much for taking this time with me today.

MENDES: Thank you so much.

BASCOMB: Jair Bolsonaro will be up for re-election in October of 2022. Despite the environmental corruption charges leveled against members of his government and a parliamentary investigation aimed at Mr. Bolsonaro for his response to the Covid crisis, he still enjoys support from much of the Brazilian public.