BirdNote®: The Power Of Albatross Partnerships 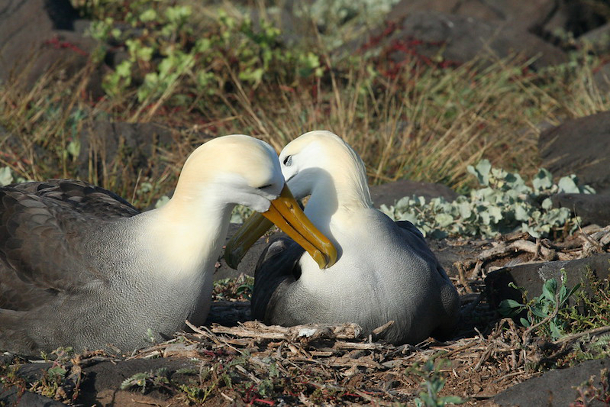 Raising a chick is no small feat for Albatrosses and both parents play a vital role. BirdNote®’s Wenfei Tong describes the strong and unique bonds that help albatrosses raise their young.

BASCOMB: Most bird species are diligent parents, sitting on their precious eggs through weeks of incubation despite rain and wind. And if there were a contest for the most doting of bird parents the albatross might just be the winner. BirdNote’s Wenfei Tong has more.

BirdNote®
The Power of Albatross Partnerships

TONG: For most albatross species, raising a chick is a real challenge. Waved Albatrosses produce such slow-growing, needy offspring that females lay only a single egg every two years. And both parents need to share the load until youngsters can hunt on their own.

Albatrosses tend to pair for life, and it can take a while to find the right partner — so some species don’t start breeding until they are 10 years old, with some individuals even waiting until they are 20. Reunited pairs go through an elaborate, synchronized ritual of braying, wing spreading, and bill tapping to reaffirm their bonds before getting down to the business of breeding.

In Hawaii, biologists were puzzled to find that some Laysan Albatross pairs had not one, but two eggs. Then they found that some of the birds going so faithfully through the ritualized series of courtship displays were both female. 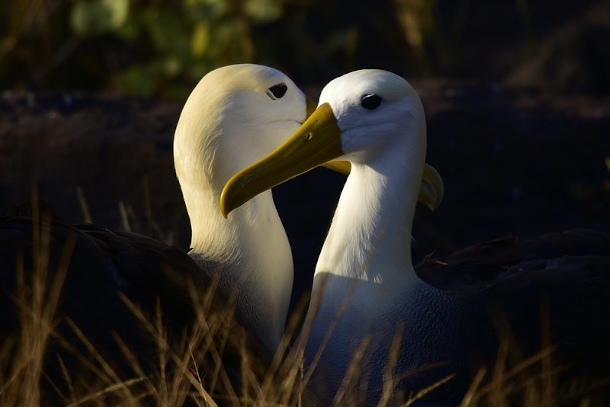 Albatrosses tend to mate for life and can live more than 50 years. (Photo: Sidney Bragg, CC)

Although the eggs were fertilized by males that had since died or were from other pairs, the females were bonded to each other. Many of these female couples remain together for years. They can’t successfully raise both offspring, but their combined efforts are necessary to raise one chick.

BASCOMB: For pictures soar on over to the Living on Earth website, LOE dot org.


Find this story and many more on the BirdNote® website

Learn more about the Waved Albatross

Learn more about the Laysan Albatross