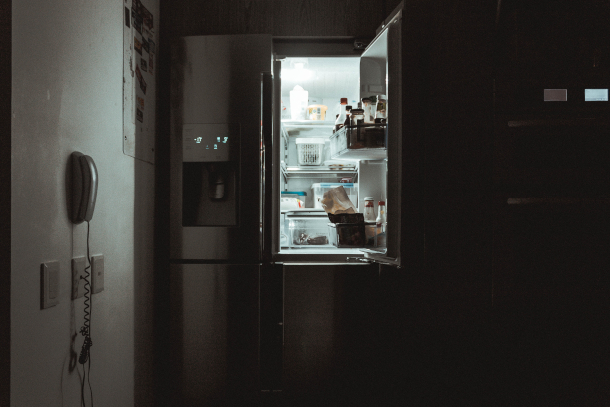 Your refrigerator could be hiding a “climate bomb” of HFC gases. (Photo: nrd on Unsplash)

When climate reporter Phil McKenna needed a new fridge, he tried to steer clear of any appliance that would use super-potent greenhouse gases to cool his groceries. Despite his efforts he ended up with a “carbon bomb” containing a greenhouse gas thousands of times more potent than CO2. He wrote about his saga for Inside Climate News and joins Host Steve Curwood to talk about why industry has made it so hard to find climate-friendly appliances.

CURWOOD: The climate emergency is so vast a problem that individual actions alone can’t solve it. But collectively personal choices do add up and can make a difference. So, when Inside Climate reporter Phil McKenna needed a new fridge, he wanted to steer clear of any appliance that would use super-potent greenhouse gases to cool his groceries. And as someone who often writes about the kinds of “super-pollutant” chemicals that might be lurking in a shiny new fridge, he knew just what to look for. Or so he thought. The fridge Phil bought ended up being a “climate bomb”. One that secretly contained a greenhouse gas literally thousands of times more potent than carbon dioxide. He wrote about his saga for Inside Climate News and joins me now from Cambridge, Massachusetts. Phil McKenna, welcome back to Living on Earth!

MCKENNA: Steve, thanks for having me.

CURWOOD: So, how did this happen? How did you, a climate reporter, end up buying a refrigerator with what you call a super-polluting refrigerant?

MCKENNA: As I set out to buy a fridge, this was something that was really important to me. I knew that there were two types of refrigerators on the market, ones that were climate-friendly, and ones that, as I write, were climate bombs. I wanted to avoid HFCs, or hydrofluorocarbons. These are chemical refrigerants that are thousands of times worse for climate change than carbon dioxide. And I wanted to get isobutane, which is another refrigerant that is only a few times worse than carbon dioxide, essentially the same as carbon dioxide, and in the small amounts used in refrigerators, essentially negligible as a greenhouse gas. And I knew where to go, I thought I had this all locked up. I had recently seen Future Proof, a website that does reviews of consumer goods with a focus on sustainability, had just profiled the most climate-friendly refrigerators of 2020. So I went there and found one that looked great, and I ordered it.

CURWOOD: So, you order this refrigerator that has the isobutane, not much of a climate footprint. And what happens when the fridge arrives?

MCKENNA: Well, I should step back to a few days before the fridge arrived, I got nervous and thought, you know, what if it really doesn't have isobutane? So I contacted the company, I asked a question, was this HFC-free, does it use isobutane? And they said "yes, as of January 2020, all of our refrigerators now use isobutane for their refrigerant." 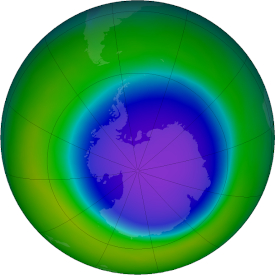 The blue and purple ozone hole over Antarctica in October 2020. HFCs were introduced in the 1990s to replace CFCs, which depleted the ozone layer that shields Earth from harmful solar radiation. But HFCs are now warming the globe. (Image: NASA Goddard Space Flight Center)

CURWOOD: So you're feeling happy now! You call, they tell you that you're getting the thing that you want, everything should be good to go. And yet, I'm talking to you, why?

MCKENNA: When the fridge arrives, I open it up and look inside. And sure enough, it uses HFCs. It uses chemical HFC-134a, which is 3,710 times worse for the climate than carbon dioxide over the near term. I write it was essentially as if they'd delivered not only a refrigerator, but also a barrel of oil and a slow burning fuse. Eventually, that will go into the atmosphere.

CURWOOD: Whoa. All right, so, you're a reporter. So aside from being unhappy, you obviously investigated. What happened?.

MCKENNA: I was livid! At first, I was a consumer more than a reporter. And I called up and spoke to their customer service and explained what happened. They were surprised, because as far as they knew, the switch had been made. They offered, though, they said they couldn't pay for it to be sent back to Home Depot, where I bought it. But they could send a service technician to come take a look at the refrigerator.

CURWOOD: Wait a second. [LAUGHS] Oh my goodness. This is like my worst experience with customer service lines. They pay no attention to what you're calling about. And they just keep reading on the script.

MCKENNA: To me the answer was, was clear as day. I knew what the problem was, they sold me one thing and delivered another. And I said, "you know, I don't need someone to come out and look at this, I need you to take some corporate responsibility." 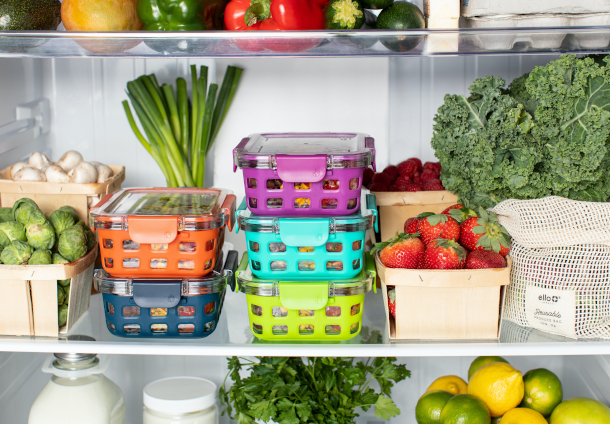 HFC-cooled refrigerators are now being phased out in the U.S. (Photo: Ello products, Unsplash)

CURWOOD: And for the record, Phil, what you wanted isn't exactly rare or esoteric. As I understand it, there are plenty of refrigerators that use either propane or isobutane.

MCKENNA: In the US, it's only recently that climate-friendly refrigerators are available, within the last few years. GE Appliances, where I bought my refrigerator from, I later spoke to their press office and they apologized profusely and said, you know, more than half of the models that we sell now are HFC-free. And within the next couple of years, all of them will be. But you're right, in other countries, starting in Germany in 1993, the first HFC-free refrigerators were sold and marketed as being climate-friendly under the name "Green Freeze." And now worldwide, more than 1 billion HFC-free refrigerators have been sold and used worldwide.

CURWOOD: By the way, what did the company now tell you about what they were going to do with the machine that was sitting in your house, all shiny and new and not the thing you want?

MCKENNA: Once I spoke to the press officer, she was incredibly apologetic, and in fairness to the company, I don't believe they misrepresented things intentionally to me. And you know, she offered to have it returned. At that point, though, I'd already spoken to Home Depot, and they had already agreed to pick up the refrigerator for me.

CURWOOD: And give you back your money, of course.

MCKENNA: They would give me back my money and they did that by calling up GE Appliances themselves. And they said yep, no problem, GE will take it back. And I said, "Oh- you know, did you, did you explain to them all of the HFC-free, HFCs, all of that?" Because my thought was, the representative I was talking to must, her eyes must have just glazed over when I started going into all of this. And she said, "No, I didn't. But you know what I told them, was that your refrigerator was not cooling properly. It was not cooling the way it should."

CURWOOD: So one would think that as a reporter, then, you said, "I bet I'm not the only person this has happened to." What did you find when you started digging deeper on this, this matter? 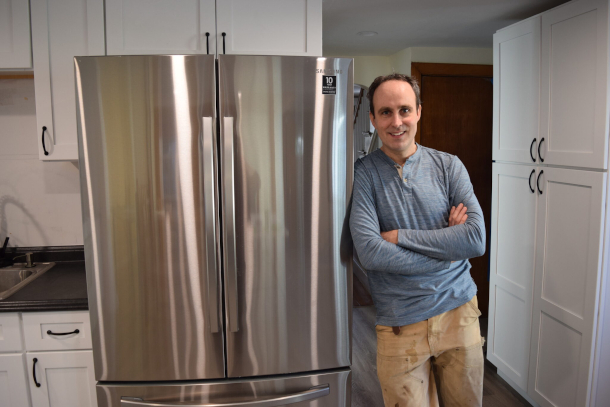 MCKENNA: Yeah, I wasn't the only one. I spoke to the Environmental Investigation Agency, a nonprofit environmental group based in Washington. And EIA, one of their main focuses and missions is fighting climate super pollutants. So this is really in their wheelhouse. And they've lobbied and done a lot of work to make it so that we now have the HFC-free options that are now available. And yet, they had the same issue a couple of years ago, when their office refrigerator broke. When they tried to buy an HFC-free refrigerator, they had an incredibly difficult time. It left both of us thinking that, you know, this really should not be the case.

CURWOOD: So my next question then, is why? I mean, you'd think that a climate-friendly appliance would be a great selling point. So why is it so hard for consumers to find out what they're getting? And for these companies to supply such devices to people like you and this agency?

MCKENNA: That's one of the most frustrating things for me. I posed this to GE Appliances, and they said, you know, at the end of the day, there's just not that much consumer awareness about this. But I don't think that completely answers it. And I think a lot of that consumer awareness could be driven by, and should be driven by, the manufacturers who are making this alternative. One thing that I do know, in other reporting I've done on refrigerants, is that a lot of the refrigerant manufacturers are based in the US. And this is a multi-billion dollar industry making HFCs and other patented chemical refrigerants. The alternative, climate-friendly, isobutane, propane, these are less expensive, more efficient refrigerants that can't be patented. And this industry would have everything to lose if, if these alternatives were out there and in use. So every time that EIA and others have pushed to get these alternatives on the market, there's been intense pushback from industry. And my guess is that that's part of what's driving this.

CURWOOD: Phil, what what advice do you have for someone listening right now, whose fridge just went on the fritz, or maybe they're moving dwellings and they're going to get a new one, what do they have to do to avoid buying a super polluting appliance?

MCKENNA: So one of the upshots of this story that I wrote is that GE Appliances has told me that they will now release their list. They have 180 or so different models of refrigerators and freezers that are HFC-free. They have only kept it internally until now, but tell me that they will be releasing it on their website. The other is that EIA, the Environmental Investigation Agency, has a website, HFC-free refrigerators buyer guide where you can go and look at potential models that you're interested in, so that you do indeed get the climate-friendly refrigerator that you want.

CURWOOD: By the way, Phil, so the refrigerator you refused is still out there. And my guess is that most of us listening to this program in the United States have a refrigerator that has this climate bomb inside it. What's to be done when those refrigerators are to be retired? How can those gases be kept out of the atmosphere?

CURWOOD: Well thanks, Phil! Phil McKenna is a reporter for Inside Climate News.


Read Phil McKenna’s story for Inside Climate News | “I Tried to Buy a Climate-Friendly Refrigerator. What I Got Was a Carbon Bomb.”