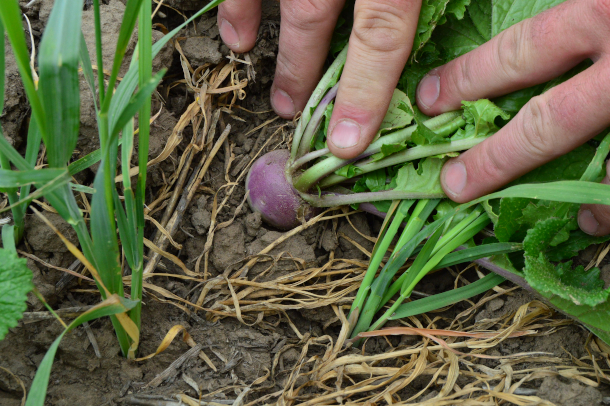 Regenerative agriculture can help grain farmers and viticulturists alike cope with the chaos climate disruption is bringing to their growing seasons. Rachel McDevitt of StateImpact Pennsylvania reports on the practices that build soil health and help sequester carbon.

BASCOMB: Well, regenerative agriculture not only offers climate protection benefits and investment opportunities it can also help farmers cope with the chaos climate disruption is bringing to their growing seasons. Rachel McDevitt is a reporter with StateImpact Pennsylvania and has our story.

HELRICH: Okay, now we have a bunch of dead vines, we have to pull them out, we replant them with something else that hopefully won't die.

MCDEVITT: Climate scientists say you can't attribute any one weather event to climate change. But global warming is making extreme weather events more likely. In Pennsylvania, itself a large emitter of greenhouse gases, we're already starting to see it in the form of heavier rain. Helrich says it can cost between $10,000 and $30,000 an acre to plant a new vineyard. He can't afford to start over every couple of years.

HELRICH: So, trying to figure out what we should be planting today, based on the fact we're trying to make really great wine 10 to 20 years from now, it's become really difficult. 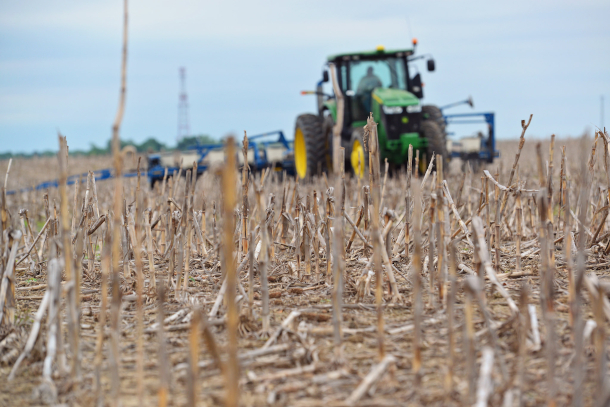 MCDEVITT: Helrich and fruit growers in Pennsylvania are among the first to feel the effects of a changing climate. They'll have to adapt by finding the right varieties that can weather future storms. But farmers can do other things too, including some that can draw carbon dioxide out of the atmosphere, acting as climate change mitigation. Plants do this naturally: they take in CO2 as food and then transfer the carbon into the soil through their roots, helping create a healthy ecosystem for beneficial microbes in the earth.

MCDEVITT: So are you looking at soil health?...

The Rodale Institute in Berks County is calling for farmers to be a larger part of the climate solution by transitioning to what's now called regenerative agriculture. It includes growing cover crops, reducing tillage, diversifying crop rotations, and better managing livestock grazing.

RUI: These things, right? These are the residues from the cover crop from the last winter.

MCDEVITT: During a media day at the research farm last summer, soil scientist Yichao Rui showed off side by side trial plots of corn. In one, a cover crop was planted after the last harvest and allowed to grow over the winter before being flattened. When new seeds were planted, the old cover crop acted as a fertilizer and a weed suppressant. And it held on to organic matter, which is mainly carbon,

RUI: Carbon, it belongs to the soil rather than the atmosphere. So we just want to put it back in there. That's health. 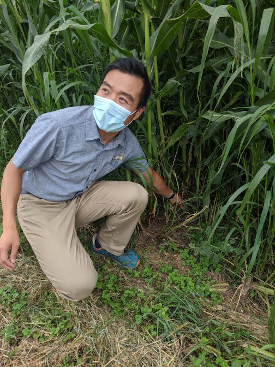 MCDEVITT: Some tech startups are trying to create markets to pay farmers to trap carbon. President Biden's transition team proposed setting up a carbon bank for the same reason. Rodale says its research shows that if every farmer in the world followed a strict definition of regenerative farming, they could sequester all manmade carbon dioxide emissions. Other estimates are much lower. And some years-long studies have cast doubt that carbon can stay locked in the soil for very long.

EGAN: I think it's possible to really oversell it.

MCDEVITT: Franklin Egan with Pasa Sustainable Agriculture runs a more broadly-focused soil health study, which looks at many of the same practices that fall under the regenerative label.

Soil health is absolutely, you know, the linchpin of any climate adaptation strategy for agriculture.

But he says climate is not the selling point for the more than 100 farms in Pennsylvania and neighboring states that participate in the study.

EGAN: I haven't met any farmers through our study whose primary motivation around soil health is mitigating climate.

MCDEVITT: Egan says if carbon payments do come about, it could help farmers with their bottom lines. The farmers I talked to aren't counting on those checks anytime soon. But what advocates call regenerative agriculture is just a good business move.

MCLAUGHLIN: 'Cause my soil is my number one asset.

MCDEVITT: Take it from Perry County grain farmer Dave McLaughlin. Healthy soil that always has something green growing and is full of living roots and microorganisms is resilient soil. It holds on to water longer through a drought. It can soak up more water during heavy rain events. It keeps nutrients in place, preventing runoff that can harm waterways.

MCLAUGHLIN: Well, there we go. And there's your earthworm holes, that's your living roots. 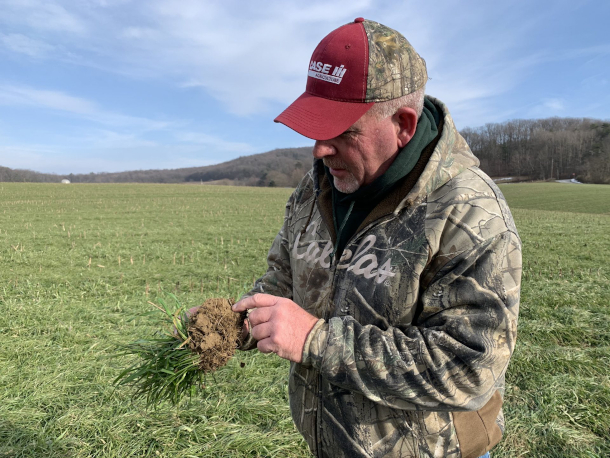 MCDEVITT: McLaughlin is holding a clump of dirt and roots that he pulled up with his bare hands, proof of the growing organic matter in his fields. He's been thinking more about soil health over the last decade. He started practicing no-till in the late 90s when his father-in-law retired, and McLaughlin figured he could save time by tilling less.

MCLAUGHLIN: That's not really a lofty reason to all this; I just had to get the work done.

MCDEVITT: But now he's excited to be building up the soil, rather than depleting it. At the Pennsylvania Farm Show a few years ago, McLaughlin gave trays of his soil to use in a rainfall simulator that would show water infiltration and runoff. He expected to switch out the trays over the course of the week, but he didn't need to.

MCLAUGHLIN: And at the end of the week, they were talking 25 to 30 inches of rain, and some of my samples had virtually zero runoff.

MCDEVITT: McLaughlin says he hasn't noticed any effects of climate change on his farm so far. But he knows the methods he uses on his land benefit people downstream and the surrounding environment.

MCLAUGHLIN: I'm doing a better job now than I was 30 years ago. The soils are better prepared than they were 30 years ago. So I'll, I'll just roll with the punches Mother Nature throws at me.

MCDEVITT: Some may be looking to people like McLaughlin and their regenerative practices as a big climate solution, but he just wants to keep his business going, so he can hand it down to the next generation.