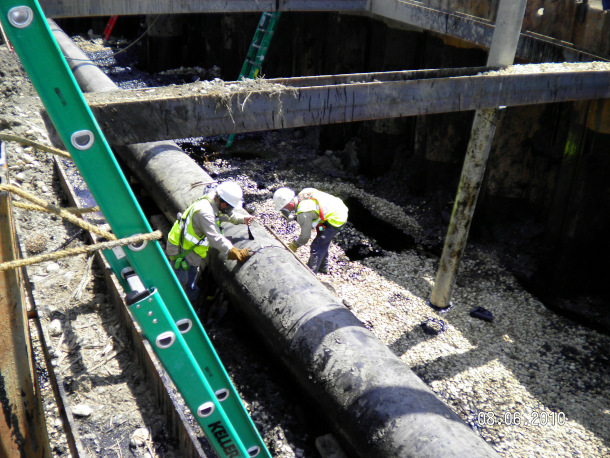 Workers prepare a section of an Enbridge pipeline for removal following a spill in 2010, where a 30-inch pipeline ruptured in Michigan, contaminating the Talmadge Creek and the Kalamazoo River with hundreds of thousands of gallons of crude oil. Opponents to the Line 3 expansion worry similar spills would endanger their lands and waters. (Photo; US EPA, Wikimedia Commons, CC BY-SA 4.0)

Enbridge’s Line 3 pipeline, which would carry tar sands oil from Alberta, Canada to Wisconsin if completed, is facing strong opposition from Native American tribes and environmental activists. Rural development economist and Ojibwe water protector Winona LaDuke speaks with Host Bobby Bascomb about the risk of spills from the pipeline and other concerns.

On his first day in office President Biden issued an executive order that canceled the permit for construction of the Keystone XL pipeline. Native American tribes and allies had been protesting the pipeline for more than a decade and applauded the president’s decision. But several other pipelines are still in the works despite concern from conservation groups and Native American tribes. Among them is the Line 3 pipeline which, like Keystone XL, would bring carbon heavy tar sands oil from Alberta, Canada into the United States. Line 3 would run a corridor through delicate wetlands and the treaty territory of the Anishinaabe peoples in northern Minnesota. It would end at the shores of Lake Superior. For more, we turn now to Winona LaDuke of the Ojibwe White Earth Nation in Minnesota who is one of the founders of the Indigenous Women’s Network, and a rural development economist and political activist protesting pipelines on native land.

LADUKE: I'm really concerned for our whole community. I mean, Enbridge is the largest pipeline company in North America, has six pipes through northern Minnesota already that are old has pipes under the Straits of Mackinac. In the meantime, Governor Walz of Minnesota approved the last tar sands pipeline. And that pipeline is 915,000 barrels a day of oil, the equivalent of 50 new coal-fired power plants. It's the end of the fossil fuel era. Why would you want to put in a bunch more tar sands pipelines?

BASCOMB: Can you tell me about the region that the pipeline would pass through and what's at stake if a spill were to occur?

LADUKE: The pipeline would cross through what's known as the 1855 Treaty territory, or the section of northern Minnesota most full of wild rice, most full of biodiversity, most full of water. We don't want any oil in our water.

BASCOMB: How would the pipeline potentially affect Native American communities in the region? 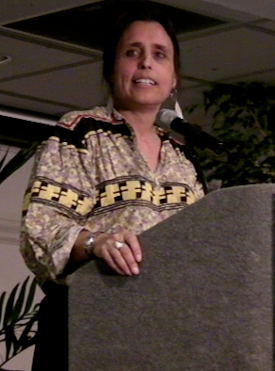 LADUKE: Well, there's seven tribes in northern Minnesota and it goes through the heart of our territory. This is our food. This is our way of life. This is the only thing we have. You destroy our land, and you destroy us. That's why we're fighting them.

BASCOMB: You've been protesting the Line 3 pipeline for a long time now, but how do you plan to approach that now that President Biden is in office and he seems more willing to see eye to eye with you on these issues?

LADUKE: You know, our communities have fought this pipeline for seven years. We fought it in courts, we went to every regulatory hearing, and, you know, now we're faced with on the ground. You know, we have 50 people been arrested, and I've been charged with trespassing. I'm facing a lot of police, riot lines. There was more police in northern Minnesota than at the Capitol. So it's civil rights violations on top of environmental destruction. It's brutal. And we've asked for a stay, you know, in construction, because what we know is that the courts are ruling against pipelines. Obviously, the Keystone XL pipeline didn't happen. And we think that if this pipeline is put up to a rigorous test, that would include for instance, the climate change impact of the pipeline, it wouldn't pass the test. You know, we want to hold Biden to the same standard as he did for Keystone.

BASCOMB: And who is doing the work there? Are they being employed within your community, or are you seeing people from outside coming in to do this work?

LADUKE: There's 4,200 workers mostly from out of state who have come into northern Minnesota to put in this pipeline. They walk through our stores without masks on, and they put our communities in the north at higher risk. And as a result, our tribes actually filed for a stay on the pipeline based in part on the fact that we are so at risk, and it is so egregious that the governor would have brought in 4,200 workers during a pandemic to northern Minnesota where the people most impacted already, are tribal people.

BASCOMB: Winona LaDuke is a rural development economist and farmer and a water protector. Thank you so much for taking your time today.


The New York Times | “Not Just Another Pipeline”