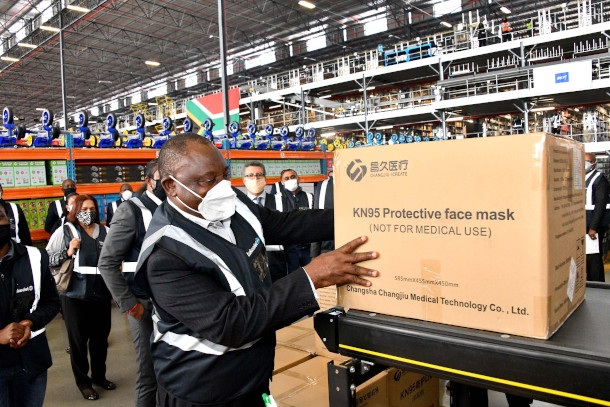 Since the start of the COVID-19 pandemic, Africa has shown a surprisingly low fatality rate. Though the continent is home to 17% of the people on the planet, it only has reported 3.5% of the world's COVID deaths. Even with the knowledge that there may be underreporting, scientists are looking further to see if there may be other factors. Andrew Harding, Africa Reporter for the BBC, joins Host Aynsley O'Neill for more.

BASCOMB: From PRX and the Jennifer and Ted Stanley studios at the University of Massachusetts Boston, this is Living on Earth, I’m Bobby Bascomb.

The COVID 19 infection and death rates across the African continent are turning out to be lower than previously feared, to the astonishment of scientists and public health workers alike. Africa is home to 17% of the world's population, but the continent only accounts for 3.5% of the world's reported COVID deaths. Even with the knowledge that there may be some underreporting, epidemiologists are still puzzled by what they are seeing. Andrew Harding is the BBC's Africa Correspondent. He joins us now from Johannesburg for more. Andrew, welcome to Living on Earth!

HARDING: Thank you very much for having me.

O'NEILL: So, Andrew, how do the death rates from COVID-19 in South Africa compare to other parts of the world?

HARDING: Well, South Africa is a bit different from the rest of the continent. The death toll here is creeping above 20,000. But the likely death toll from COVID may well be near a double that, that's what even officials here recognize, their figures aren't exact. That seems to compare, quite similarly to places like Britain, which has a similar population, if those figures stay the same and bear out. I think the greater confusion as in other parts of Africa, where the death toll seems to be significantly lower. But there are still tests being done here to to understand quite how many people here have been affected, and there are suspicions among scientists I'm speaking to, that actually a lot more people have been affected, but without symptoms.

O'NEILL: And how reliable are those numbers for South Africa and the rest of the continent?

HARDING: Well, the scientists have generally argued that the statistics, the data in South Africa, which is a very sophisticated economy, and health system in many ways, are pretty good. The concern has always been in poorer parts of the continent where a lot of countries with really very underfunded, under-resourced health care systems. And the concern there has been that really no one has a clue about how prevalent the virus has become. Because simply no one is doing the test, you pick up a war torn country like the Central African Republic, and they're just doing basically a few hundred tests, rather than the tens of thousands, or millions that need to be done. 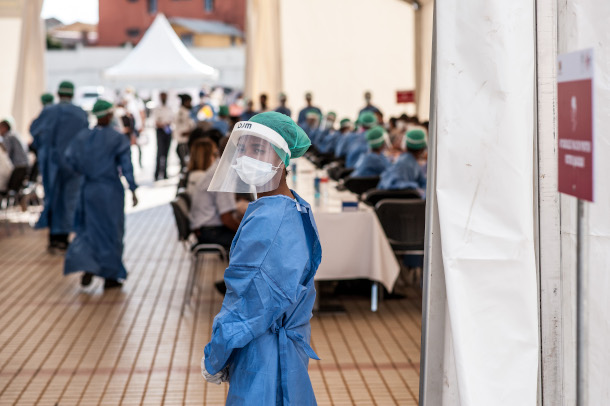 HARDING: Well, I've been trying to follow and to understand this right from the start. And a few months ago, I was talking to some of the pretty senior prominent scientists here, the sort of Dr. Fauci equivalents here in South Africa, Professor Salim Karim and others who are saying, look, these numbers still don't quite make sense to us. I think there are lots of reasons why Africa has done relatively well so far. But the scientists were saying, some of these figures still don't add up. And there was lots of speculation about why. And this was a continent, you have to remember, that is used to diseases, used to viruses, and used to really grim death tolls. And so people were very worried here, that Africa would really face a very devastating toll from COVID-19. And that doesn't seem to have happened. It has, to some extent in South Africa, and in some of the northern countries, but across vast amounts of this continent, they seem to be having a much easier time. And the scientists I was talking to here was scratching their heads, and wondering whether, as well as the key things we already know, for instance, demographics, the fact that the average population is 19, 20, 21, compared with the early 40s, in Europe, in America, so a much younger, much stronger, if you like, population. And far fewer elderly people in their 70s and 80s, who of course, tend to be the ones who die from COVID-19. So people obviously took that factor on board. And they took the fact that African governments, by and large, responded very quickly and very aggressively with lockdowns out of a sense of acute vulnerability, and also out of the sense that the virus seemed to be slow to arrive in Africa. So they had a bit of extra time, if you like, to get their act in gear, and they'd done a good job with that. But even then, the scientists I was talking to here, we're going, we still are not sure that that explains everything. Maybe there are other factors involved. And that's where it gets a lot more complicated, and frankly, a lot less clear, because the science is still in its early stages. But people are looking very hard right now with studies to see whether there might be some degree of prior immunity, perhaps because of exposure to other coronaviruses in the past, to other viruses. And perhaps as well because of exposure to more different types of jabs and inoculations. That people are saying, well, these kind of jabs may give your immune system a boost, or at least get it rehearsing more more effectively for what comes next. So all these theories are now being tested very aggressively, both in the United States and in Africa, and around the world as scientists still I think are trying to understand what on earth is going on here. 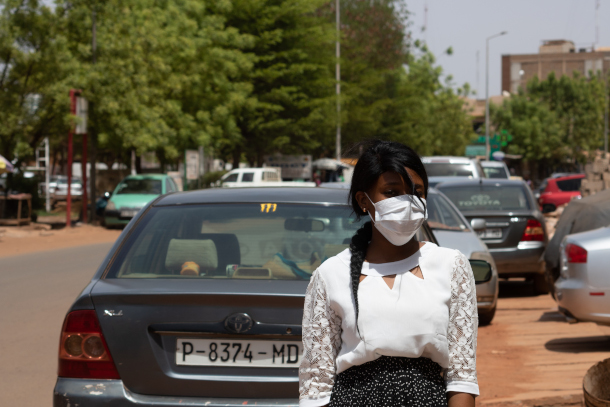 It’s likely that Africa’s low COVID death rates have to do with the relative youth of the continent’s population, but scientists are investigating further. (Photo: Ousmane Traore, World Bank, Flickr, CC BY-NC-ND 2.0)

O'NEILL: What are some other reasons that scientists have been suggesting as to why, as you were saying, Africa has been doing better than expected?

HARDING: Aynsley, there have been a lot of theories. Some good, some discounted. For instance, early on, I think the key thing was, as I mentioned, that tough aggressive lockdown, people thought that must surely play a role. The demographics, clearly, I think that's beyond doubt, has played a role. People have talked about the distances here, the fact that Africa is not connected by travel to the rest of the world, in quite the same way as Europe and elsewhere. People tend to come in on flights, they tend to be wealthier people who might be better informed. This is very clearly what happened in South Africa, in the early stages. The first wave of infections was actually a group of skiiers, coming back from Italy, to Johannesburg. Wealthy people, they went and isolated very quickly in their own big houses far away from the general population. And the government very efficiently tracked them down. And that early wave was pretty much crushed, and it didn't spread into the general population. People also talk about the possibility that altitude might have an impact, the possibility that humidity and hot weather might have an impact. I think those have been increasingly played down, discounted. Some people have also talked about the fact that to some degree, this is still a very outdoor culture, if you like, a lot of people still live in the rural areas. It's harder for the virus to to spread when it's outdoors. People have also talked about the fact, as I mentioned earlier, about things like the BCG and MMRs, jabs, inoculations, that people have had earlier in their lives. And wondering whether that, maybe even anti-malarial medication, maybe those things are messing, if you like, with people's immunity, possibly positively, possibly negatively. 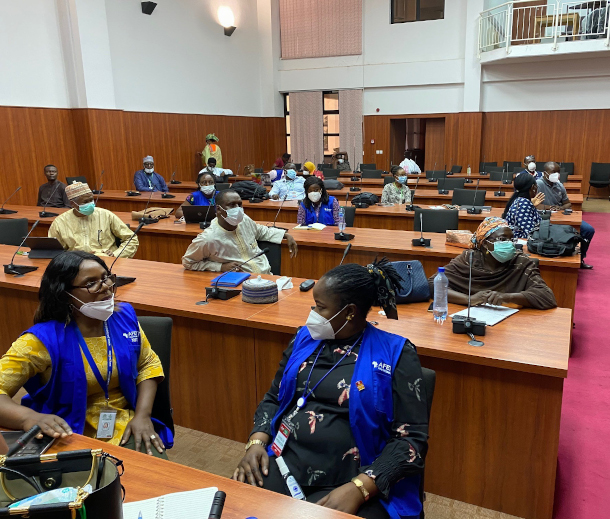 O'NEILL: And Andrew, I feel like it's not a stretch to say that all of this is all a bit muddy, a bit unclear, a bit mysterious. What are you keeping your eye on in the future to see what will help clarify things?

HARDING: Yes, I hope you can tell how cautious I'm being because the scientists keep telling me when people start getting ideological or wanting to prove something, that's where you have to be careful, you have to wait for the scientific consensus to build up, because some of these early tests can often prove one thing. And then another test comes along and proves something else, and it really does take time to build up. But I think what we're looking for particularly right now are tests of really detailed population mapping. So trying to understand particularly how the first wave of this pandemic affected different communities, and trying to understand by testing those communities in a really, really sophisticated, detailed way working out why the virus affected some communities more, and perhaps spared others. And clearly there are examples of the suburbs more likely to have been less affected than the more heavily populated townships and informal settlements here, where people tend to live three, four, five, six, seven to a room. And it's much harder to avoid passing a virus on, it's much harder to social distance in those conditions. But I think we're waiting to see the evidence of those tests to see if there could be more lessons learned and more explanations for the patterns and the paths that this particular virus has taken.

O'NEILL: Andrew Harding is the BBC's Africa correspondent. Andrew, thank you so much for joining us.

BBC | “Coronavirus: What’s Happening to the Numbers in Africa?”