The Pandemic And American Hunger 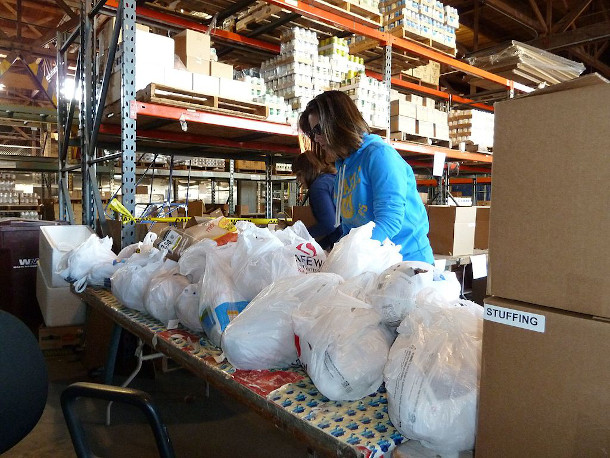 The coronavirus pandemic has exposed the perilous economic state of many households in America, with one in four U.S. households experiencing food insecurity in 2020 despite an abundance of food overall. Frances Moore Lappé, the author of Diet for a Small Planet and founder of the Small Planet Institute joins Host Steve Curwood to talk about food insecurity in the U.S. and why combating it should be a priority for the incoming Biden-Harris administration.

DOERING: From PRX and the Jennifer and Ted Stanley Studios at the University of Massachusetts Boston, this is Living on Earth. I’m Jenni Doering.

The coronavirus pandemic has exposed a number of fault lines in America, from skepticism and outright rejection of proven science to the perilous economic state of many households. The long lines at food banks are testimony of growing food insecurity in the US, which was already at ten percent of households before the pandemic, and more and more people without a job now struggle to feed their families. But the US produces plenty of food, says Frances Moore Lappé. She’s the author of Diet for a Small Planet and founder of the Small Planet Institute and joins us now. Frankie, welcome back to Living on Earth!

MOORE: Thank you, I am delighted to be back to my favorite radio show.

CURWOOD: Thank you. So here we are in the holiday season and this past Thanksgiving, we saw pictures of people waiting, five or more hours in line at food banks. What's going on here?

MOORE: It's is tragic, Steve and it is totally needless. I just saw that number 4 billion meals being distributed. And it is such a wakeup call for all of us that we have developed a system that is one of the most unfair unequal in the world. And we can do better. So this hunger that we're seeing exposed is something that is hidden most of the time, we are the world's largest food exporter, and we produce so much food every day, vastly more than Americans need to eat and yet we still have this hunger.

CURWOOD: So Frankie, who are these people in line at the food bank? This isn't just the poorest of the poor, I gather?

MOORE: No, I think what it shows is that we have so many people living at the edge. There are something like over 40 million Americans who make no more than $15 an hour. And we've seen these numbers, like most families don't have enough savings to get them by any kind of emergency and that need not be. We do have a safety net, it’s not adequate it's not nearly what it is and other industrial countries. There's so many who aren't, you know, needing to take advantage of that safety net, who still are so vulnerable to economic turndown.

CURWOOD: Yeah, so the folks of the poorest of the poor, presumably have gotten a range with the food stamp program and such to take care of the bulk of their needs but in this pandemic, they're a whole bunch of folks who never thought that they would have to go to a food bank, I guess?

CURWOOD: What are the psychological effects of hunger?

MOORE: Well, my core understanding of our society and in general people is that we, you know, we hear the expression, seeing is believing but actually for human beings, believing is seeing. And the frame we've been taught deliberately, very consciously taught to see our economy as basically fair, free, free, free, and fair. And from that premise, then if you're not doing well, if you're really struggling, what does that say to you that well, you might feel shame, because you're not succeeding. First of all, no, market is free., every market has rules. Unfortunately, in our market, we've come to accept something driven primarily by one rule, and that is do what brings highest return to those people already who are wealthy, until we reach such income inequality, that the last time I looked, we ranked in inequality of income between Argentina and Haiti, worse than more than 100 countries. 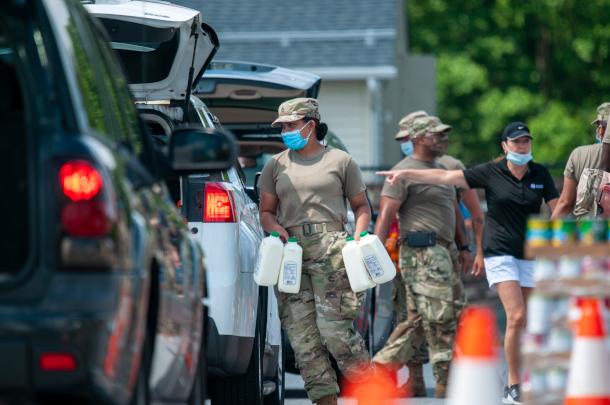 The COVID-19 pandemic is expected to push 17 million Americans more into food insecurity this year, raising the total to 54 million. In 2020, about 7 million more Americans enrolled in the Federal Supplemental Assistance Program. (Photo: Brendan Mackie, National Guard, Flickr, CC BY 2.0)

CURWOOD: So the family that's in line in their vehicle for food at a food bank, and by the way, you see a lot of vehicles there that wouldn't be owned by the poorest of the poor. The psychological effect on them is essentially they've somehow failed. If they're hungry, they're doing something wrong. Is that what you're telling me?

MOORE: Well, I think, yes, I, you know, I know that it's not conscious for most of us. But I do think that there is this premise that if you try you make it in our economy, because we have this great system, we have this free market economy in which everybody can have a chance. In fact, I'd love to harken back to the decade in which I was born in the 40s. Franklin Roosevelt said that the liberty of democracy is not free if we tolerate this concentration of economic power, and he said that political rights alone can't make a democracy. We have to have economic rights and he wanted an economic Bill of Rights. He understood that the preamble to our Constitution it says that our purpose as a nation is to promote the general welfare, not just for everybody to free to do their own thing. And when FDR stepped up, we had been decades in which my generation from the 40s to the 70s, when my children were born that generation, every income class, it's real family earnings doubled, but the poorest gained the most. But my children who were born in the 70s, that generation is a different tale, the wealth just rushed to the top. So my point, Steve, is that experiencing this moment exposed, so much right in our eyes but the COVID pandemic is something that in the past we have been able to avoid with real leadership that under understood that we have to set fair rules to allow our political goals to be met for the general welfare.

CURWOOD: Now, not only are people food insecure in this country, but around the world, there's a lot of food insecurity, yet you write that there is plenty of food for global population. So, as we seem to grow more food than ever before, what's going wrong?

MOORE: Well, yes, this is what woke me up. You know, this was my, in my 20s, when I said, “Why is there such hunger in the world?” Because we were being told then that there just wasn't enough food that we were over running the earth, too many people. So I checked it out. And you're absolutely right. There is more than enough food produced in the world today to make us all have plenty, plenty. And you know what, since I wrote my first book, Diet for a Small Planet, we now per person in the world, we have one fifth more food than we did then produced for every person on earth. And yet we still have one in five of young children are stunted, stunted. And there's a lifelong impact from lack of good nutrition and poor water supplies. So we are still challenged from going to the roots of hunger, which is to me democracy itself.

CURWOOD: Well, let's talk about how food insecurity around the world but especially as it's been revealed during the pandemic here in the United States, how does that affect the dignity of people? How does it affect our Democracy, to have so many people online trying to get food from a food bank?

MOORE: Without a fair distribution of income, fair opportunity, it is almost impossible for me to imagine how we can have such inequality and have a genuine political democracy. Now, this last election, the billions that were spent, were record spending and most Americans are very against that. The vast majority of us, three quarters of us see that money has too much influence in politics. And so that is the link there we get it that highly concentrated wealth infects our democracy, and therefore it doesn't serve the majority.

CURWOOD: So some people say food is love. What are the long lines at the food banks tell you about what's going on in families and in our society?

MOORE: It tells me that we've not been able fully to accept that when our constitution calls us to promote the general welfare, that that's premised on the idea of love that we all feel connected to one another, that we are participants. So let's listen to who we really are. Human beings need power, meaning and connection and let's use those needs to get at the roots of hunger.

CURWOOD: Francis Moore Lappé is author of Diet for a Small Planet and founder of the Small Planet Institute. Frankie, thanks so much for taking the time.

CNN | “‘Thousands Line up for Groceries at Dallas Food Bank”