Making the Pill from Yams to Fish 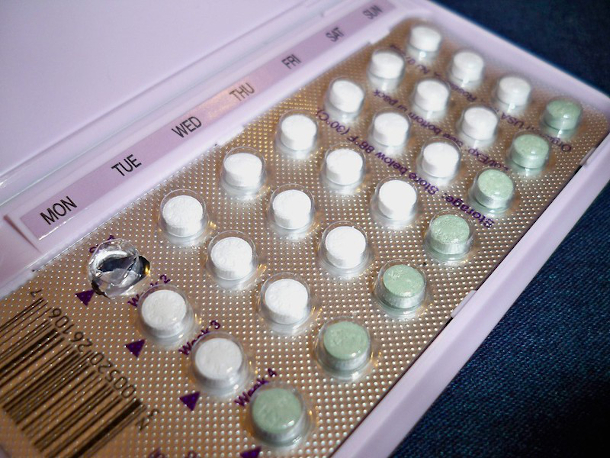 Most formulas for the birth control pill use the synthetic hormones progestin and estrogen, derived from crude oil and even plants. Once these hormones make their way through a human body and into wastewater systems, they can affect fish and other animals in the environment. Alison Bruzek reports.

CURWOOD: Worldwide, more than 150 million women use birth control pills. Most use a version made of two synthetic hormones, progestin, and estrogen. The little pills come from a surprising source, and these hormones can also affect waste water. Reporter Alison Bruzek has the story.

SANTEN: The brilliant move was to go down to Mexico and find all of these yams.

BRUZEK: This is Richard Santen, an endocrinologist at the University of Virginia. And he’s talking about the 1942 trip that gave us one of the pill’s key components. The traveler was chemist Russell Marker. And he wasn’t just a fan of tubers in general. He was hunting for a specific type of yam. Because Marker had discovered something huge in his lab at Penn State: you could modify compounds found in certain plants, and turn them into hormones. He’d already found he could take a molecule from the sarsaparilla plant and transform it into progesterone. And that’s due to a similar chemical structure. But the cost of that molecule was just too expensive. In Japan, chemists had found they could isolate a similarly shaped molecule from a yam.

SANTEN: So he went down to Mexico, he tested 100 different types of yam until he found the one that he wanted to use... the plant that contained the precursors of progesterone.
BRUZEK: That yam was growing near a stream, by a bus station in Veracruz. Scientific name: Dioscorea Mexicana. Also known as the tortoise plant, because of its shell-looking roots. Without a collecting permit, he brought back the root. Some say he bribed a local policeman to smuggle it out. Regardless, from that yam root, he created what was then the largest amount of progesterone ever produced. 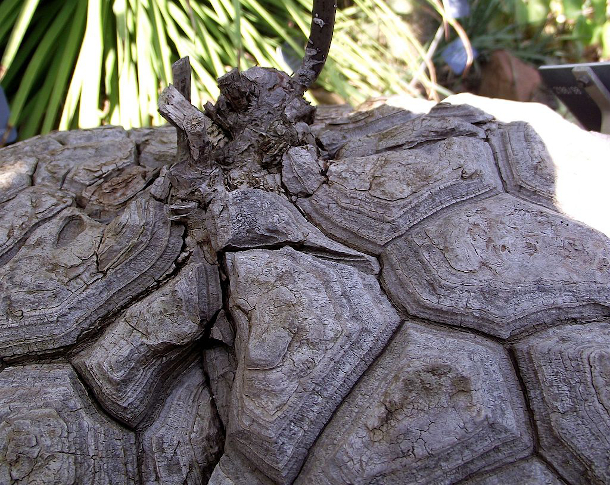 SANTEN: The cost went down from $1,000 a gram to about $5 a gram. And quite honestly, without that, there would not have been the feasibility of developing a birth control pill.

BRUZEK: Progestin, or synthetic progesterone, is just one component of most pills today. They also contain estrogen. Much like progestins, human-made estrogen can be made from plants like soybeans, or yes, certain yams. Today, both hormones can also come from something else: fossilized carbon.

ANASTAS: To a first approximation, every pill comes from an oil rig.

BRUZEK: Paul Anastas is a chemist at the Yale School of Medicine.

ANASTAS: What that means is that the building blocks of most synthetic chemistry use petroleum and oil as their basis.

BRUZEK: Anastas says oil has the right chemical ingredients to be the foundation of all sorts of chemical compounds, including hormones.

ANASTAS: So most of the building blocks to build all of our materials — plastics, polymers, packaging, but even elegant materials such as pharmaceuticals — often came from petroleum, from oil.

BRUZEK: And that’s the beauty of chemistry. Take compounds from crude oil or a yam root, transform and tweak them in the lab, and there you have it: an astounding ability to create our own versions of progesterone and estrogen. And with just two molecules — these two hormones — you can make every rainbow-colored pill you see today.

BRUZEK: Packed into their small, foil pouches. Punching the tiny pills out is surprisingly satisfying. You fill a glass of water. Take a drink. And … AHHHH.

HARRINGTON: You swallow it

BRUZEK: Where it heads down the throat, into the stomach ...

HARRINGTON: It goes into your GI tract

BRUZEK: Where it gets absorbed through the intestinal lining ...

HARRINGTON: Actually gets absorbed into the circulation that goes straight to the liver and kind of passes through the liver metabolism.

BRUZEK: Elizabeth Harrington is a family planning specialist at the University of Washington. Once inside the body, the synthetic progesterone and estrogen do their thing — they inhibit other hormones that would otherwise stimulate the ovary to release an egg and trigger the rest of the menstrual cycle. In other words, they prevent pregnancy. And the body only needs a tiny amount of the hormones in the pill to get the message. 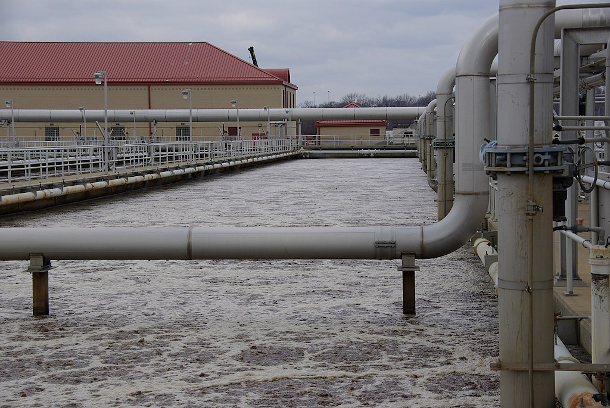 HARRINGTON: And the rest of it is hormonally inert byproducts.

BRUZEK: The liver actually inactivates the unused hormones. And those byproducts don’t hang around for long …

BRUZEK: Up to 68 percent of the hormones in each dose of a birth control pill are flushed away. The remains of your turkey sandwich, your lemonade, and those leftover hormones … all head down your apartment’s pipes, where they mix with the waste of your neighbors, flow out into the city sewers and, most of the time, wind up at your nearest wastewater treatment plant.

AGA: Most treatment plants, they rely on highly active microorganisms to biodegrade all the organic chemicals there.

BRUZEK: Diana Aga is a chemist at the University of Buffalo. And she’s saying: Good bacteria to the rescue. They degrade any contaminating or harmful things in the water like oil, dirt, household chemicals, and bad viruses and bacteria.

AGA: The purpose of wastewater treatment plants is really to remove nitrogen, phosphorus, dissolved organic carbons. So it’s not their goal to remove pharmaceuticals.

BRUZEK: Like hormones. In fact, sometimes, it’s actually because of the wastewater treatment plant that the estrogen from the birth control pills gets reactivated!

AGA: There are also these bacteria that are capable of deconjugating them again.

BRUZEK: Meaning the bacteria cleave off a key part of the chemical structure — restoring the active hormones.

AGA: So then they go back to the active form. And this active form are very persistent.

BRUZEK: So the hormones come out the other end of the wastewater treatment plant, arriving in wetlands, rivers, creeks — intact and active once again. Aga studies Lake Erie and Lake Ontario. And she’s seen the effects that estrogen, both human-made and natural, can have on aquatic animals, like fish.

AGA: Most of the fish will be affected as they swim. And sometimes we would see what we call feminization of fish. Where male fish starts developing eggs or sometimes a fish having both the male and female organs.

BRUZEK: Even though the amount of synthetic estrogen is small.

AGA: Like a teaspoon of salt, dumped into an Olympic-sized swimming pool. That’s how little it is. 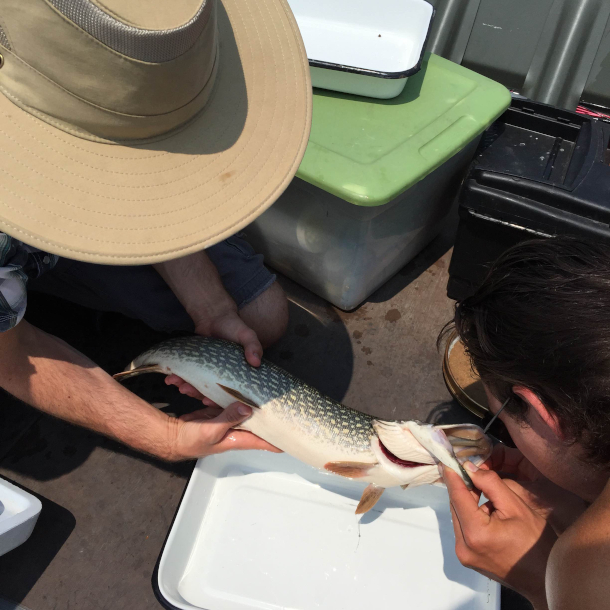 A muskellunge or “muskie” fish examined by colleagues of Diana Aga for endocrine disruption. (Photo: Courtesy of Dr. Alicia Perez-Fuentetaja)

BRUZEK: Unlike humans who take the hormones in cyclical doses, fish are receiving that dose continuously from their environment. Now, before you switch from the pill to the patch — for the fish! — you should know — these effects aren’t entirely due to synthetic estrogen. The average amount in the pill has decreased significantly since it was first introduced — by as much as 20 times. And Aga says hormones that everybody — that’s women and men — make naturally are being rinsed into our waterways too. Even though the potency of synthetic estrogen is higher than what our bodies naturally produce, most estrogen in our wastewater is not from the pill.

AGA: Most of the endocrine disruption that we observe in the environment is because of the volume of natural hormones that humans excrete, and animals excrete, in particular.

BRUZEK: So you shouldn’t feel guilty every time you flush. But it does mean you shouldn’t rinse your extra birth control pills down the toilet, or pour them down the drain. You can bring extras to your clinic. Your local police department or the pharmacy in your grocery store may also have a drug takeback program. And while you’re there, head over to the produce aisle, and take a moment to appreciate the relatives of the yam that brought you the pill in the first place.


About Russell Marker’s synthesis of progesterone from Mexican yams