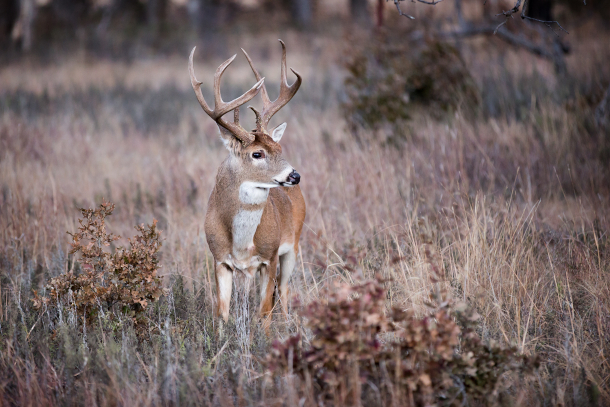 The U.S. Fish and Wildlife Service banned lead shot for waterfowl hunting on public lands back in 1991, but lead ammunition is still widely used for hunting other game, like the above white-tailed buck. (Photo: Larry Smith, Flickr CC BY 2.0)

Millions of American families who eat hunted meat may be exposed to lead poisoning from the bullets that killed the animal. What’s more, hunters donate some 2 million pounds of hunted meat to food banks across the U.S. each year, most of which is not inspected for lead contamination. Sam Totoni reported a series on lead in hunted meat for Environmental Health News and joins Host Steve Curwood to discuss the grave implications of this overlooked risk.

CURWOOD: Fall is a peak time for hunting deer and moose, and millions of families put that meat on the table with pride. And what they can’t use is often given to food banks. But much of that game is shot with lead ammunition that splinters and contaminates the meat, which can lead to health problems in adults and impair cognitive development and functioning in children. There are alternatives to lead ammunition such as copper, and some 25 years ago the U.S. Fish and Wildlife Service banned the use of lead shot to hunt waterfowl. And California recently became the first state to issue a full ban on hunting with lead bullets. But in the majority of states and on federal land it’s still legal to use lead ammunition to hunt deer and moose. And hunted meat goes largely unregulated, according to a recent investigative report from Environmental Health News which is raising concerns about the people who eat it, including food bank patrons , where millions of pounds of hunted game are donated every year. Samantha Totoni, a reporter for Environmental Health News, joins me now.

TOTONI: Thank you so much. It's an honor.

CURWOOD: You've done a series of research papers and articles about lead poisoning. What inspired your investigation into lead in hunted meat?

TOTONI: Well, I grew up in rural Pennsylvania where hunting is very popular. And I know that deer hunters use lead ammunition. But I noticed that in the public health world, lead ammunition wasn't typically included with other potential sources of lead exposure, like the dust from lead paint or contaminated soil and water. I thought that well, maybe that's because it's not really an issue of human health. I began reading the scientific literature and interviewing experts. And it didn't take long to realize, oh, this issue is definitely real. Lead ammunition contaminates meat and is absorbed by the digestive system. And that is significant because there is no safe level of lead in the blood. There's just overwhelming scientific evidence that this problem is real.

CURWOOD: Roughly, how many people hunt for meat in the United States, how many families could possibly be exposed to lead contaminated meat?

TOTONI: So roughly 10 million hunting families in the United States.

CURWOOD: Right now this time of year, for example, there's a moose hunt, there's a deer hunt. What kind of risk are people running if they eat the meat that they get by doing this kind of hunting?

TOTONI: So lead has similar properties to essential elements like calcium, iron and zinc. And this similarity allows led to gain access through cell membranes in the body. The average level of lead in contaminated meat that was donated to food banks in Wisconsin was predicted to cause blood lead levels in children that are associated with a loss of IQ points, decreased cognitive performance and behavioral problems. And those levels of lead for pregnant women have been associated with nearly quadrupling the odds of a miscarriage and increasing the risk of preeclampsia, which is a life threatening high blood pressure condition during pregnancy. Low levels of lead have also been associated with high blood pressure, chronic kidney disease and cardiovascular disease.

CURWOOD: That's quite a list of toxic consequences. Now, people who are eating the meat that they've hunted or that others have hunted, what happens when that animal is shot with a lead bullet, I mean, how much does the lead disperse throughout the meat that someone might eat? 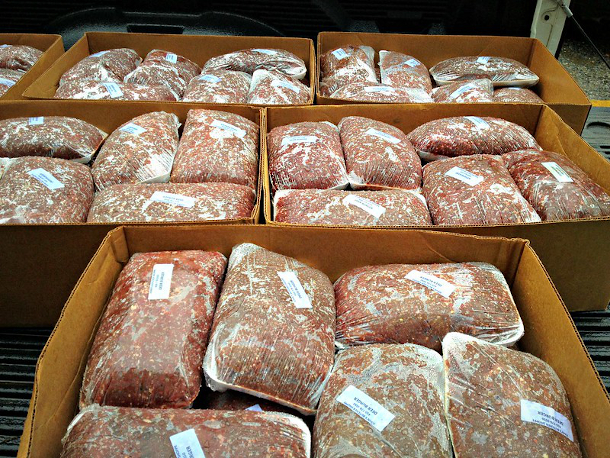 TOTONI: Well, upon impact a lead projectile from rifle or shotgun can fragment into really tiny pieces, too small to see with the naked eye or to sense when eating. So scientists have used x rays to visualize and count often hundreds of minute lead particles in hunted meat and have detected high concentrations of lead using chemical analysis in terms of hunted meat that's donated to food banks. When people have looked for lead in the donated meat, they have found it. This includes past efforts to x ray donated meat in North Dakota, Iowa, Wisconsin and Minnesota.

TOTONI: Well, there was an interesting case study that was published in the scientific literature a couple of years ago of a subsistence hunter in New Zealand, and they found that his blood lead levels were at about 74 micrograms per deciliter of lead in the blood. And for reference, lead in the blood is considered to be elevated at just five micrograms per deciliter. And so the author's provided the hunter with non lead ammunition and his blood lead levels subsequently began falling throughout the period where they were monitoring him.

CURWOOD: Now, give me a ballpark figure, about how much hunted meat goes to food banks each year?

TOTONI: Every year hunters donate over 2 million pounds of hunted meat to food banks across the US and these are great programs that provide critical nutrition for families in need. However, most states do not implement a lead inspection program for the meat even though most of it has been shot with lead bullets. Past efforts to x ray donated meat from food banks in North Dakota, Iowa, Wisconsin and Minnesota have all found lead in some portion of the meat.

CURWOOD: So what states have any are screening hunted meat for lead to keep it from winding up in these food banks where people might unknowingly eat it?

TOTONI: The Minnesota Department of Agriculture administers an inspection program for firearms hunted meat, and their program is reimbursed through their state's Department of Natural Resources. Last year, they screened about 13,000 pounds of donated venison for lead. And they ended up discarding over 940 pounds of it preventing that lead contaminated meat from reaching vulnerable people.

CURWOOD: Sam, it's been more than 25 years that the US Fish and Wildlife Service essentially issued a ban on using any lead and in ammunition aimed at waterfowl. Why do you think it's taken so long for, as you say, one state California to move ahead to ban lead and other hunting.

TOTONI: Bullets that are fired from high powered rifles have been shown to contaminate meat much more extensively than slower moving slugs fired from shotguns. And I think that a ban on lead ammunition for people hunting larger game is likely to influence people who use rifles more than the bans for waterfowl hunting related lead. One difference between now and 25 years ago, is the sophistication of the disinformation campaigns and their ability to reach a wider audience and convince hunters that this is not an issue that they should support.

CURWOOD: So I'm a little puzzled by that. I mean, if there's clear evidence that if hunters go out and they use lead based ammunition, and then they have several pounds of venison or moose in their freezer, that their families might eat over a long period of time that they will be concerned that they will be feeding their families something toxic, as opposed to wanting to deny that there's a problem with lead. What's the issue here is non lead ammunition so much more expensive than lead based ammunition or something? 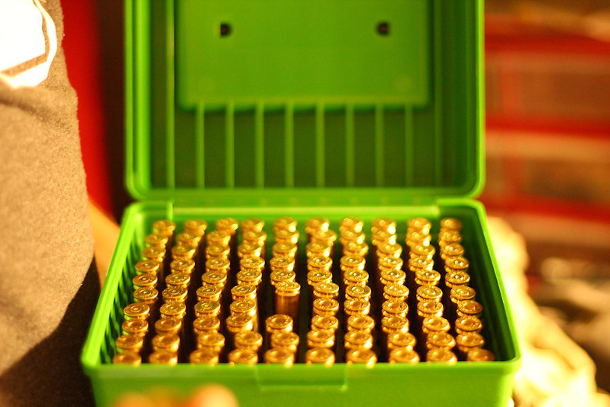 TOTONI: So ammunition that's made out of 100% copper is comparable in price to the high quality lead based ammunition, although it can be twice as expensive as the very low quality lead based ammunition. I've spent a lot of time with hunters who use lead ammunition both in my research and reporting. And what they tend to say is that this really isn't a topic that comes up, and when it does come up that it seems to be coming from groups that they perceive to be anti hunting. And the vast majority of these hunters say that they do want to have information about the potential health effects of lead. Hunters don't want to be impacting the health of their family members or of the people who eat the meat that they donate.

CURWOOD: Now, as I understand it, the inspection of game meat is exempt at the federal level. How do you think that impacts the ability of various states to pass regulations regarding meat inspection, their ability and frankly, their willingness?

TOTONI: I spoke with state agencies in the states that are donating the largest volume of venison to food banks every year, including Missouri, Virginia, Pennsylvania, and Iowa. And these states told me that the exemption on the federal level has resulted in the exemption at the state level. And meanwhile, it's unclear whether food banks realize there is no oversight of lead contamination in donated meat. In response to questions about accepting lead shot meet, the central Pennsylvania food bank said that they trust the high standards that are set by the State Department of Agriculture and the USDA, who in reality have no standards for this at all?

CURWOOD: What tips do you have to offer hunters who want to avoid getting contaminated by lead in the meat that they kill? I mean, one way of course is to not use lead bullets, but what other choices are there?

TOTONI: Well, there's another option, and that is to avoid grinding their meat. The inspection program conducted in Minnesota is unique in the respect that they do discourage meat processors from grinding meat during firearm season. Instead, they encourage processors to donate small roasts, and loin chops and this is because the vast majority of lead contaminated meat has been ground venison. Lead is very soft as a metal. So even if there's one piece of lead, the steel grinding equipment can actually fragment it and spread it into multiple packages.

CURWOOD: Samantha Totoni's articles on lead and hunted meat and at food banks appeared in Environmental Health News. Sam, thanks so much for taking the time with us today.