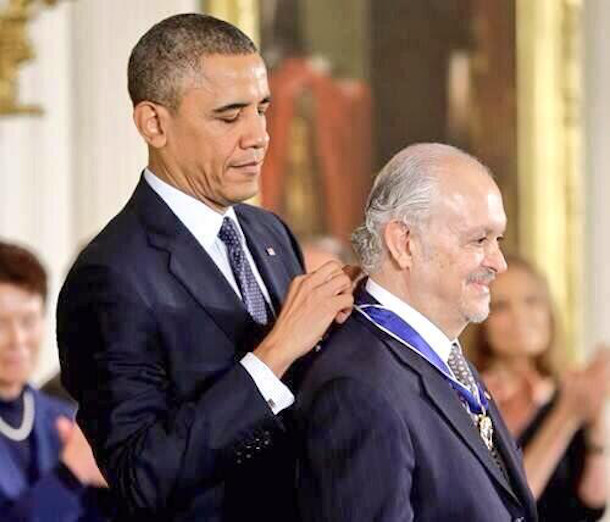 Mario Molina received the presidential medal of freedom from President Barack Obama for his work on helping save the ozone layer. (Photo: Courtesy of the Mario Molina Center)

One of the scientists who discovered how CFC chemicals deplete the ozone layer passed away on October 7, 2020. Mario Molina shared a Nobel Prize in Chemistry for the discovery, which led to the historic worldwide ban on CFCs under the Montreal Protocol. In later life, Molina also fought to mitigate the harmful effects of climate change. Living on Earth’s Paloma Beltran has the story.

Back in 1974 scientists started calling for the protection of the ozone layer, much as they are sounding the alarm today to protect our climate. At the time chemicals known as Chlorofluorocarbons or CFCs, were used in everything from refrigeration to hair spray. CFCs were making holes in the thin layer of ozone high in the sky that protects life on Earth from harmful ultraviolet radiation from the sun. The discovery linking CFCs to ozone depletion was made by two scientists at the University of California at Irvine named Sherwood Rowland and Mario Molina, and they shared many prizes for their work. Professor Rowland has been dead since 2012, but Mario Molina died at the beginning of October just this year. We pause to remember Mario Molina for his part of the discovery and also the hard work he did to help convince the world to ban those chemicals, and after a dozen years the whole world finally listened to science and acted to ban CFCs in 1987 under the Montreal Protocol. Living on Earth’s Paloma Beltran has more.

BELTRAN: In 1974 Sherry Rowland and Mario Molina published a paper in the journal Nature highlighting the science of CFCs and the chemical’s responsibility for weakening the ozone layer. It was ridiculed.

ZAELKE: When he first published his paper with Sherry Rowland, they were vilified by the chemical industry. They were attacked. They were not invited to meetings of chemical societies.

BELTRAN: Durwood Zaelke is founder and President of the Institute for Governance & Sustainable Development and he was a long time colleague and friend to Professor Molina.

ZAELKE: They were shunned by their peers. And it took a lot of courage to fight back. Scientists don't always do this. But Mario and Sherry showed us what an advocate scientist or a science advocate could be like. And this was absolutely critical. 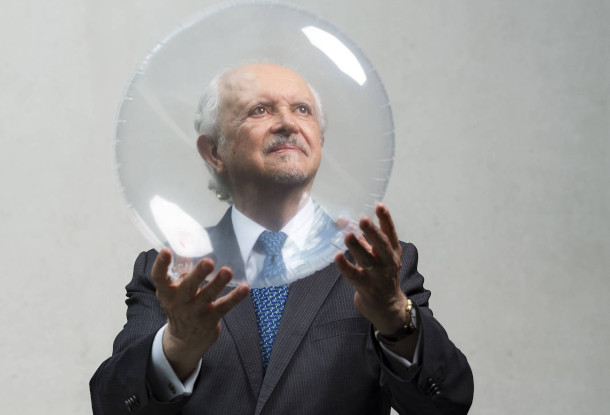 BELTRAN: Professor Molina’s advocacy was crucial for establishing the scientific urgency that culminated in the 1987 Montreal Protocol, a global agreement to protect the stratospheric ozone layer. It was signed by 197 countries, every country in the world, making it the first treaty in the history of the United Nations to achieve universal ratification. Durwood Zaelke credits that success to Professor Molina.

ZAELKE: He worked tirelessly as an advocate, to advance the protections that we needed to solve the problem that he identified.

BELTRAN: But that’s not something that scientists, then or now, are typically comfortable with. 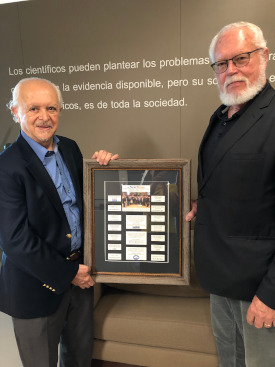 Mario Molina (left) and Durwood Zaelke (right) after successfully committing countries to phase out the use of the hydrofluorocarbons, which were substituted for ozone depleting gases, but proved to have a strong greenhouse effect and added to global warming . (Photo: Courtesy of Durwood Zaelke)

BELTRAN: In 1995 Professor Molina became the first Mexican-born scientist to receive the Nobel Prize in chemistry. He was a world famous scientist but colleagues like Gaby Dreyfus the senior scientist at the Institute for Governance and Sustainable Development routinely describe him as down to earth and approachable.

DREYFUS: I was super nervous when I found out that I was going to meet him in person. But he was the most kind, welcoming person. I remember sitting in his office and being treated like I belonged at the table. He was an incredible gentleman.

BELTRAN: She says he was adamant that his research should be used for public benefit.

DREYFUS: He shared with me his passion and dedication to doing science in a way that serves society essentially, doing the work that takes the science from the lab to make a difference in the world.

BELTRAN: And he continued to make a difference in the world by focusing his scientific research and advocacy on the existential threat of climate change. Durwood Zaelke was with him at an international meeting in Kigali, Rwanda where they successfully urged some 150 countries to eliminate HFCs, a potent greenhouse gas.

ZAELKE: Those chemicals by phasing them down under the Montreal Protocol, we can avoid up to a half a degree Celsius of future warming. So Mario was one of the people who saw the potential and then worked on science, but then, behind the scenes on diplomacy.

BELTRAN: In 2016 he was awarded the Presidential Medal of Freedom by President Barack Obama.

BELTRAN: In a speech following the medal of honor ceremony Professor Molina spoke about why it is important for scientists to work with policy makers. 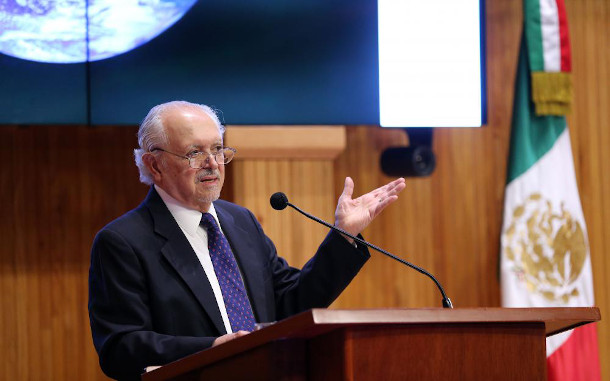 Mario Molina was the environmental policy advisor to the President of Mexico Enrique Peña Nieto. (Photo: Courtesy of the Mario Molina Center)

MOLINA: What does it take to change people's behavior? What does it take to implement policies? But even within the field itself, of addressing, say, a large environmental problem, you need different branches of science. But you also need to communicate to economist to lawyers and putting all this together is how you can get the society to improve.

BELTRAN: Professor Molina continued to work on the climate change problem to his last days. His final article was published after he passed away. It was an op-ed written with Durwood Zaelke that laid out a 10 year plan to reduce HFCs and mitigate climate change.

ZAELKE: So this now is, in a sense, a sacred text. It is Mario's last. It’s his instruction to us. And, I will be doing everything I possibly can to honor him with further work, and I miss him. He was a good friend.

BELTRAN: Professor Molina passed away on October 7,2020. He leaves behind a legacy of excellent research and scientific advocacy that serves as an inspiration for the enormous scientific challenges of our time. Thank you Mario Molina. For Living on Earth, I’m Paloma Beltran.