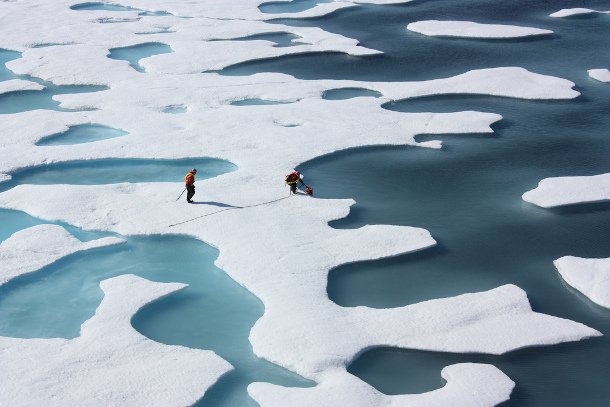 Sea ice has yet to form this year in key parts of the Arctic (Photo: Kathryn Hansen, NASA Goddard Space Flight Center, Flickr, CC BY 2.0)

Amid recording-breaking high temperatures in the far north linked to climate disruption, Arctic Ocean ice is unusually late to re-form this year. Jennifer Francis, senior scientist at the Woodwell Climate Research Center, speaks with Host Steve Curwood about how a delay in sea ice freeze can disrupt the ecosystems of the North and weather systems as far south as Florida.

You may recall the extreme winter weather we’ve had in recent years in the US, ranging from unusual warmth in Alaska, to prolonged cold as far south as Florida, even the early snows this year in the upper Midwest are all linked to deep gyrations in the jet stream. And it looks like we could be in for another winter of weather extremes thanks in part to the impact on the jet stream by the loss of sea ice in the Arctic. The main nursery for Arctic sea ice in Siberia usually starts icing over in the fall but for first time on record the Laptev Sea is ending October without its usual sea ice. Jennifer Francis is a Senior Scientist at the Woodwell Climate Research Center, and joins us now for more. Jennifer, welcome to Living On Earth!

FRANCIS: Thank you so much for having me, Steve.

CURWOOD: So tell us: Why is there a delay in the Arctic sea ice formation this year towards Siberia? What's going on?

FRANCIS: Well, the main reason is that we had a very unusual spring and summer up in the Arctic. And all around really the high latitudes of the Northern Hemisphere. We lost a lot of sea ice this year. We came very close to breaking the record minimum amount of sea ice that occurs in September. It was very, very warm across Siberia this summer. We saw a record high temperature not only for Northern Siberia, but also for the Arctic as a whole of over 100 degrees Fahrenheit, it was just an astounding event. And so by losing all that sea ice in the summer, you get rid of this very white surface that reflects most of the sun's energy back to outer space, so it never enters the climate system at all. So instead, we had this very dark ocean surface sitting there, which absorbs all that extra heat, it warms up the water all summer long. And so now we've got all that extra heat that built up all summer and it's gradually escaping back to the atmosphere. But until all that extra heat escapes, the sea ice won't form because the surface of the water has to get to the freezing point. And so by having all that extra heat, it is slowing the formation of the ice this fall.

CURWOOD: And just to be clear, all that we're seeing now with this loss of sea ice is closely related to climate change.

FRANCIS: Absolutely. There's no other explanation for why the ice is going away.

CURWOOD: Now, why does this matter, and particularly to humans? 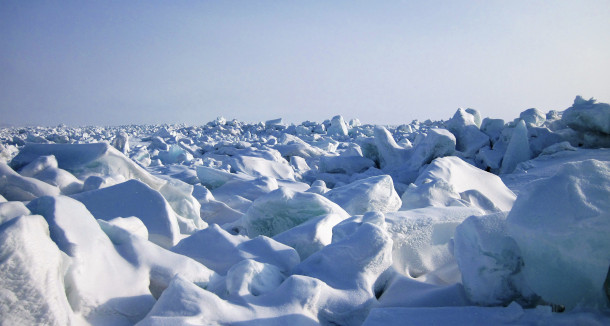 FRANCIS: So locally, the humans who live up in that part of the world are accustomed to having that ice there so that they can go out on the ice, they hunt for animals, that's part of their traditional culture, it's very important source of their food. And when the ice is missing, it really disrupts all of their cultural traditions. And also it affects the animals that they're hunting. So by not having that ice there, we're seeing a big disruption to the food web, the marine food web. The ice generally blocks a lot of the sun's energy from entering the water; that light is needed by the algae that formed there. So, by having things very different from normal, we're seeing a lot of differences in the kinds of animals that live in the water up there -- big shifts in the ecosystem.

CURWOOD: So what you're telling me is that this lack of sea ice is related to some of the volatility in the weather that we've seen last year, when forecasters are talking about the polar vortex. There's a relationship here, I gather.

FRANCIS: There certainly is. The Arctic is a very important component of the large scale climate system. And by changing it as much as we have, meaning that literally, we've lost half of the sea ice in just 40 years in terms of how much area it covers in the summertime, that is just a tremendous change in a very important part of the climate system. And it's happened very, very quickly. And we know that by warming the Arctic so fast and reducing that North-South temperature difference, it is going to have an impact on the large scale wind patterns, which translates to our weather. So yes, by losing all that sea ice, we are definitely having an impact on both the weather patterns that we normally think of happening, but also causing more extreme weather events as well. 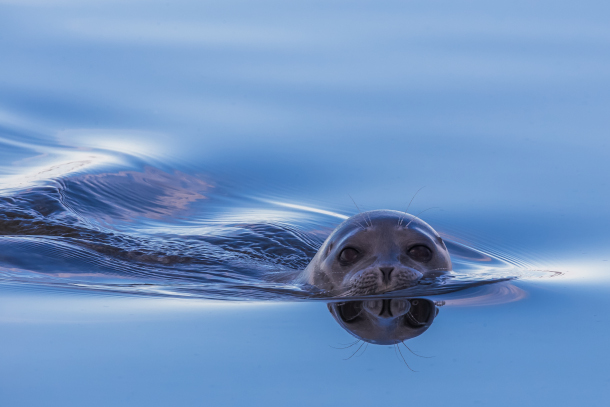 CURWOOD: So let's dig a little bit deeper into the notion of climate disruption and what might be happening with the warming of the Arctic. Overall, it's getting a lot warmer. But yet some of the research shows that this will lead to more extremes in temperatures at lower latitudes. Tell me how that works.

FRANCIS: Right. So the jetstream is this boundary between the cold air to the north of it and the warm air to the south of it. So when it takes one of these big northward swings, say over Alaska, it allows all of that warm air from the south to penetrate way, far north much farther north than it would. And so Alaska experiences very warm temperatures. But then on the flip side of that, on the downwind side, we tend to also see these large southward dips in the Jetstream, which, in contrast, allow the very cold air from the Arctic to plunge much farther south.

CURWOOD: So in a few decades, it's likely that Arctic sea ice will continue to shrink if we stay on this trend until perhaps there's no more ice left during the summer. What do you think would happen if this downward trend in Arctic sea ice continues?

FRANCIS: Well, I don't think that downward trend is an if. It's definitely going to continue. It jumps around from year to year but overall we're seeing a very steady very noticeable downward trend in the amount of sea ice in all seasons. It's largest in the summer. But we are also seeing the decrease in the sea ice in the winter. So what's going to happen is that we expect sometime around the year 2040, it could come sooner could be a little later, we expect to see a summer where there's virtually no ice at all left in the Arctic Ocean. And if that happens, it's going to basically make all of the changes that we're already seeing happening just get worse. We're going to see even bigger disruptions to the marine food web, more difficult living conditions for the people who live up in the high latitudes, bigger changes also to the weather patterns because we're going to absorb that much more heat up in the Arctic Ocean, that extra heating is going to accelerate the melting of glaciers and the Greenland ice sheet which contribute directly to sea level rise. We're going to see that extra heat accelerate the thawing of permafrost. And when that happens, we expect to see a big release of extra carbon dioxide and methane that's basically tied up in that frozen soil. And we also expect to see perhaps some opportunities for further exploitation of resources up there. So shipping, which has been on the rise very dramatically up in the far north, because of the loss of sea ice ships can now take a much shorter path from Eurasia to the North American continent. But also there's a lot of interest in exploiting the oil and the resources that are up there. Because now without sea ice there, it becomes much less expensive and more feasible. So that's what's on the table if we continue, well, when we continue to lose all the sea ice up there.

Scientists expect the Arctic sea ice to continue to recede in coming decades until there is no more ice left in the summer. (Photo: NASA, Wikimedia Commons, Public Domain)

CURWOOD: As a researcher whose long study this area, how alarming is this? How much of an alarm bell does this sound to you as a scientist, and actually, for us as citizens?

FRANCIS: We've been watching the Arctic change for many years in such dramatic and rapid ways that the alarm bells have been ringing for a while. This part of the world we know is sensitive to climate changes. It's been known for a long time that when the globe is a whole warms a little bit, the Arctic warms a lot more. So it really is a bellwether in terms of climate change. And finally, I think the alarm bells are starting to be heard by people other than scientists who study the region because it's having such big impacts on things like sea level rise and weather patterns and extreme weather. And we can connect those dots now for people. The research has gotten to that point where we can show these huge changes in the Arctic and how they affect everybody on the planet.

CURWOOD: Jennifer Francis is a senior scientist at the Woodwell Climate Research Center in Falmouth, Massachusetts. Thanks so much for taking the time with us today.