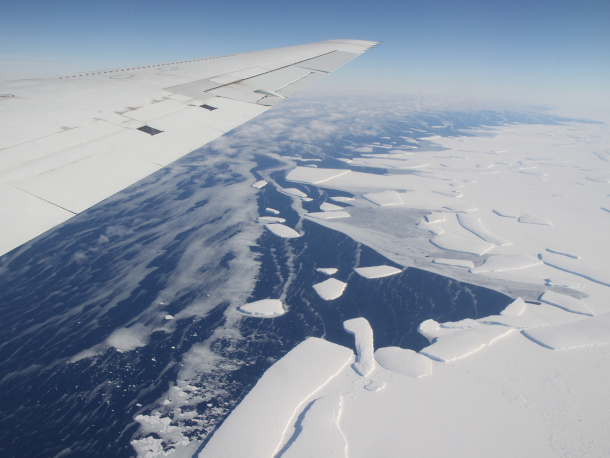 The Antarctic and Greenland ice sheets are melting at alarming rates thanks to climate change, and will continue to do so for decades even if the Paris Climate Agreement goals are met. Host Steve Curwood speaks with Princeton University climate scientist Michael Oppenheimer about how these massive ice sheets contribute to global sea level rise, and why their melting necessitates both the reduction of global warming gases and adaptation to protect vulnerable coasts.

As the planet continues to warm, the ice of Antarctica and Greenland melts faster and faster, adding to sea level rise. Scientists say even if the Paris Climate Agreement goals are met, melting from the West Antarctic ice sheet alone could raise the oceans some eight feet by the end of the century. Sooner than that, in less than 30 years, the ice losses from Antarctica, combined with the rapid melting of Greenland are projected to elevate the seas one if not two feet. And that doesn’t factor in the impacts of thermal expansion of water already in the ocean and the melting of mountain glaciers. Here to discuss the latest research is Michael Oppenheimer, Professor of Geosciences and International Affairs at Princeton University. Michael Oppenheimer, welcome to Living on Earth!

OPPENHEIMER: Glad to be here!

CURWOOD: Walk me through the science behind the melting of the Antarctic and Greenland ice sheets. What's going on?

OPPENHEIMER: First of all, let's understand what an ice sheet is and how it forms. Think about a pancake on a griddle, the pancake slowly spreads out. And the reason it does is the weight of the liquid when you pour it down, and once that spot basically pushes the pancake, so the circle of pancake expands, well, an ice sheet forms when instead of pancake batter, snow falls on the middle of a very cold continent. And as that mountain of snow piles up and transitions to ice, the weight is increasing. And that weight, just under the force of gravity, pulls the whole thing down, and the ice spreads out and eventually covers the continent. That's what happens in Greenland. And that's what happens in Antarctica. And then that addition of ice due to snowfall is balanced out, because as the pancake or mountain of snow and ice spreads and gets toward the ocean. Well, the ocean is warmer than the land area in the Arctic. And number two, as that mountain of pancake or ice collapses and spreads, it's getting lower in altitude. So if you go toward the edges where the ocean is, you're at sea level eventually, and the atmosphere is colder up high and warmer down near sea level. So those two effects mean that the ice around the edge is going to start to melt a little bit. If you look at the Greenland ice sheet, the primary contribution to sea level rise is the runoff of melting water. Antarctica is a little more complicated. The ice doesn't just melt there, it doesn't melt much at all. In fact, what it does is it slides. Just think of that pancake again, the stuff is oozing towards the edge of the pan. Same thing with the ice, it oozes or flows. And when it gets to the water to the ocean edge, pieces break off -- those are icebergs. So there are two contributions to sea level rise from these ice sheets, direct melting and their warmer parts, and flow and formation of icebergs when the flowing ice gets to the ocean's edge. 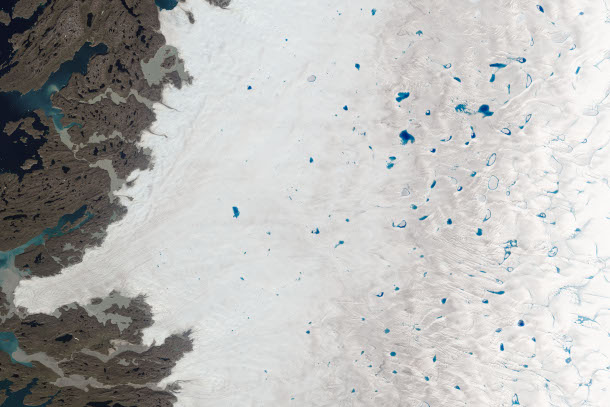 CURWOOD: Michael, give me some numbers, what's going on with the nexus of sea level rise and the loss of ice?

OPPENHEIMER: Well, let's look at it historically, what happened during the 20th century, for instance. Sea level rose about six inches. And that was largely absent any significant contribution except for the last 15 years maybe of that century from the ice sheets. And it rose six inches, largely due to thermal expansion and the melting of mountain glaciers. As I said, the rate is now accelerated, it's going now at sea level rise the equivalent of 12 inches per century, but it's not going to just stay at that level, it's already accelerating. And it's going to get faster and faster. By the end of this century, depending on which projections you look at, the rate of sea level rise could wind up being about five times what it was, about five times that six inches in the 20th century. And we're having trouble dealing with the six inches that we had trouble last century. In this century, five times as fast sea level rises can be awfully difficult to deal with. At this point, we're not ready for it. We're not primed to deal with it. We haven't deployed the adaptive measures that we really need to at the scope and rate that we need to. So this is a looming not just a difficulty, but in some cases a disaster.

CURWOOD: So talk to me about the challenges that coastal communities face now amid these rising sea levels.

OPPENHEIMER: Well, there are two major challenges. One is sea level is rising in some sense faster than people's ability to grasp what's going on and government's ability to mobilize and act. And secondly, there's a larger uncertainty about exactly what's going to happen because of the uncertainty in the behavior of the ice sheets. But we know that the thermal expansion of seawater is happening, we know that mountain glaciers are happening, that part is not subject to a lot of uncertainty. And furthermore, the other big uncertainty in this problem is how much greenhouse gas we're going to emit into the atmosphere in the next 20, 30, 40 years and therefore, how warm the planet will get and therefore how much ice melt and thermal expansion will get. And when you put all that together, what you see interestingly is the difference in the sea level rise projections between a lot of emissions and not too much emissions is not very much until you get out to about 2040/2050. So for the next approximately 30 years, you can say with fairly good confidence that we know what the sea level rise is going to be. 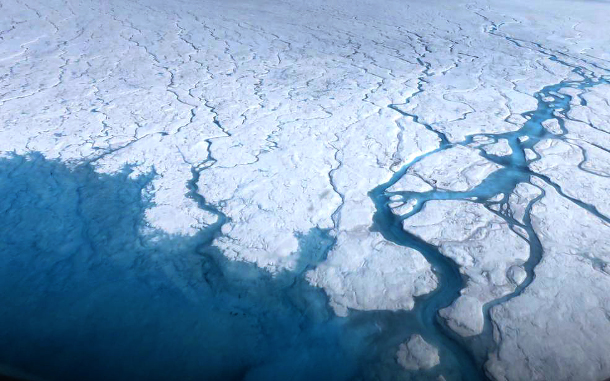 CURWOOD: So what is that number? How much sea level rise for parts of the United States by the year 2050?

OPPENHEIMER: Well, we're talking about one or two feet, which may not sound huge, but on a typical East Coast beach, a foot of sea level rise takes away a hundred feet of beach horizontally going inland, unless you keep feeding the beach. And that's just sort of symbolic of what's going to happen. A lot of areas aren't beachy. There are buildings in places like downtown Boston or downtown Manhattan, that are just a few feet above sea level, and you add high tide to it, and you add a storm to it, and all of a sudden, you got a lot of flooding, just like happened in Hurricane Sandy. or forget Hurricane Sandy, a big Nor'east storm. A Nor'easter in this neighborhood does the same thing at a slightly smaller scale. So we have a problem today, this isn't a problem for the future. This is what we failed to protect against adequately today.

CURWOOD: If the ice continues to melt at this pace, what does this mean for the future of humanity?

OPPENHEIMER: Well, it means among other things, that we are inevitably going to lose a lot of cultural heritage, because a lot of human cultural heritage is built right along the coast. And that's unfortunate, but it also means huge amounts of money lost. And it also means lives lost because people are caught unaware in big floods that happen now more and more regularly.

CURWOOD: So before you go, give me an assessment please of what policies you think are necessary to curb this damage to the ice sheets, to at least slow down this process? And what do you think the role of the United States is in this? And for that matter, what do you think of the various climate proposals that are around here in the US? 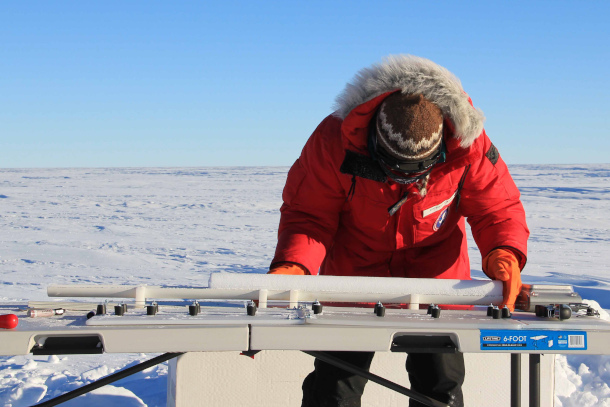 OPPENHEIMER: The bottom line is we're not going to get anywhere. And we're always going to be behind if we don't implement very quickly a serious program to reduce emissions of the greenhouse gases, particularly carbon dioxide from burning coal, oil and natural gas that are causing the problem in the first place. As much adaptation as you do, climate change will always have run into if you don't control the greenhouse gas emissions. As much greenhouse gas emissions as you control, it won't be enough to protect people, unless we also do a significant amount of adaptation. So we have to do both. We need to build cities and other settlements smartly, so they're not so exposed to sea level rise. There should be funding for building sea walls, surge barriers, whatever coastal defenses are necessary, where they're necessary, and there should be funding for facilitating people who make the choice to relocate away from the coast or away from forest fire areas or away from any area that's threatened by climate change, and where there's a limit to how much protection the governments can offer or that individuals can take upon themselves. So it all fits together that solving climate change isn't like often some corner by itself. Solving the climate change problem is integral to setting our society right again.

CURWOOD: Michael Oppenheimer is a Professor of Geosciences and International Affairs at Princeton University. Michael, thanks so much for taking the time with us today.

OPPENHEIMER: It's been a pleasure.

The Guardian | “Melting Antarctic Ice Will Raise Sea Level by 2.5 Meters – Even if Paris Climate Goals Are Met, Study Finds”