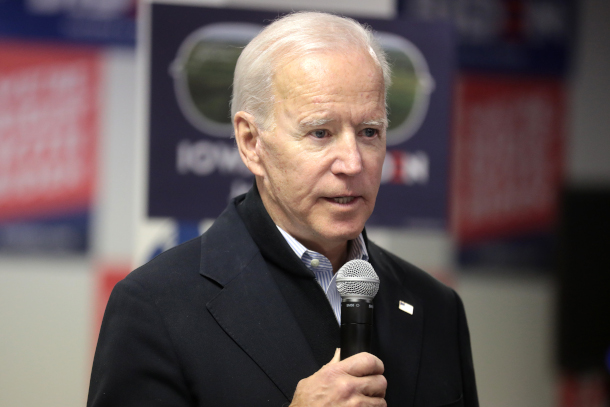 Surveys suggest Black and Latinx voters, along with younger voters, are more likely than white voters to view the environment and climate as their top concerns. However, due to both voter suppression and an enthusiasm gap people of color are less likely to exercise their right to vote. Pete Maysmith, Senior Vice President of Campaigns for the League of Conservation Voters, joins Host Steve Curwood to talk about how his organization plans to help mobilize Black and Latinx votes this November to boost pro-environment candidates.

If the past is any guide, more a third of eligible voters in America won’t cast a ballot in the closely watched November elections, and that is why environmental advocates and others are pushing get out the vote efforts. When it comes to the environment, research shows Black and Latinx voters, along with youth, are more likely than white voters in general to list the environment and climate as top concerns. Yet thanks to obstacles to voting and an enthusiasm gap, Black and especially Latinx voters are less likely to exercise their right to cast ballots. But if green leaning voters of color are mobilized to match white turnout, it could change the outcome for candidates who favor environmental action, and that’s why the League of Conservation Voters is spending millions to rally Black and Latinx voters. Pete Maysmith, Senior Vice President of Campaigns for LCV, joins me now. Welcome to Living on Earth!

MAYSMITH: Really glad to be here. Thanks so much for having me.

CURWOOD: So given that polls show that Black and Latinx voters care much more about the climate and environment than other groups, what's LCV's strategy for mobilizing these voters to get them out to the polls?

MAYSMITH: So we're really at LCV doing two things, Steve. First off, focusing on mobilizing and turning out young people and voters of color. That obviously includes in very significant numbers, Latinx and Black voters. Because we know that when they turn out, on balance, will support pro-environment, pro-climate change candidates. So talking to them this year, especially in this moment, given that so much of our voting is going to look and be different given the pandemic that we're in the middle of. And then the second thing that we're doing that we can talk a little bit about, if you'd like to, is also some persuasion, some longer term conversations. We want to make sure that Latinx and Black voters are choosing to vote for a pro-environment candidate -- in this case, of course, that's Joe Biden as we look at the Presidential ticket -- and making sure that they understand just how awful Donald Trump has been, he's been an environmental disaster as President. 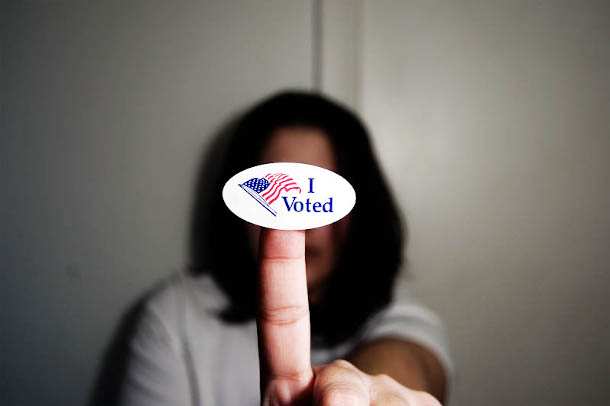 Across the country, voters of color are less likely to turn out to the polls than white voters (Photo: Jamelah E., Flickr, CC BY-NC-ND 2.0)

CURWOOD: So another factor that the folks at the Environmental Voters Project did was look at what motivates people to vote to get out there. And at the end of the day, it's fairly emotional, they say, and actually the biggest way to motivate the demographics we're talking about here, Brown, Black and, and youth, is peer pressure. That if somebody in a social group is voting and makes a bit of noise about it, that's the most likely thing to persuade somebody else to get out there and vote. To what extent are you looking at emotional factors such as the peer pressure phenomenon?

MAYSMITH: Well, absolutely, Steve. I mean, first off, there's all sorts of methods and ways to connect in with voters and to talk about what their neighbors are doing, what their colleagues are doing, other family members are doing. So texting somebody, reaching out, you know, writing a letter to somebody, you know, connecting in some way to somebody to say, Hey, I'm voting, you should vote too. And then also higher profile influencers, whether it's, sometimes it's media stars and sports stars, we've seen LeBron James really step up in this regard, for example, talking about the importance of voting and why they're voting. It's sharing their story, is often very powerful to help motivate people to vote.

CURWOOD: So there are probably, you know, 6, 7, 8 states where the Presidential race is likely to be decided. And one of the most interesting right now appears to be Florida, which has a high Hispanic population. And if one believes recent polling, and of course polling has its strengths and weaknesses, Joe Biden is not getting the kind of response from Latino voters that he gets, let's say from Black voters. They, Latinos seem to be split about evenly right now, according to the recent polls. Given how important Florida is, given how much Florida is at risk from climate disruption, how are you trying to break through with Latino voters there?

MAYSMITH: So Steve, I think that's a great question. And so there's a couple things that we're doing, really knowing that there's a heavy concentration both of Latinx voters and of a high concern around climate change, is reaching into the state with messages that speak directly to what Trump has done. And this is, I think, an important point; in particular, in the moment that we're in with the pandemic, research that we did in the springtime and summertime showed that linking Trump's inaction and more importantly denial of the pandemic, along with inaction and denial of climate change, ignoring the scientists, tearing down the institutions that are designed to keep us safe, in both instances, right? And then how that has negative consequences and outcomes for you, your family, your neighborhood, and your community, again, in many, many instances, this is a prime example of environmental injustice, rearing its head. And so we've made those linkages and told those stories through digital ads and through direct mail to these voters in Florida. 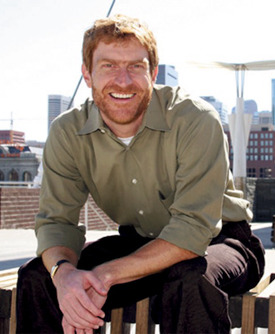 CURWOOD: I'd like to play a clip here. This is the, the Democratic Presidential nominee Joe Biden in a speech on September 14, from Wilmington, Delaware.

CURWOOD: Pete, I don't think I've ever heard a Presidential nominee use that kind of language on climate, with Joe Biden calling Donald Trump a "climate arsonist." How strongly do you think that is resonating with voters?

MAYSMITH: Well, I think it is resonating. And I think in part that's why Biden used that language, and I think it's going to continue to resonate. You saw him tie it to the suburbs, right? Because Trump's been trying to pretend that if you live in the suburbs, you know, you'll be in peril, your life will end, the suburbs will somehow be destroyed and disappeared, which I don't remotely understand, if Biden were to be President. And but Biden is saying no, this climate arsonist, right? We have climate fires, we have climate floods, we have climate hurricanes. That's what is the real threat, again, to you and your community and your loved ones and the people in your orbit. That's the real threat. Voters want someone to react to that. And that's why Joe Biden's using that language, and good on him for doing that.

CURWOOD: And how could Joe Biden craft his language that speaks more directly to Black and Brown and younger people, because, you know, the suburban thing that President Trump has been talking about is a code word for, look out, white people in the suburbs, the Brown people are coming for you. What could or should Joe Biden say that speaks more directly to the Black and Brown?

MAYSMITH: Well, I think a couple of things. I mean, one should just, just be really direct and we've seen some of this from Joe Biden, that what is happening to Black and Brown communities as a result of environmental injustice, it is connected to racial injustice in this country, period, full stop. Communities that are, you know, have to live next to coal plants or, you know, facilities that dump toxic sludge into waterways or spew toxics into the air are predominantly, more than not, Black and Brown communities. That's why in part that you see higher rates of asthma and other disease and other illnesses in those communities. And so making that direct linkage and naming that, I think there's a lot of power, Steve, in naming that and saying that. 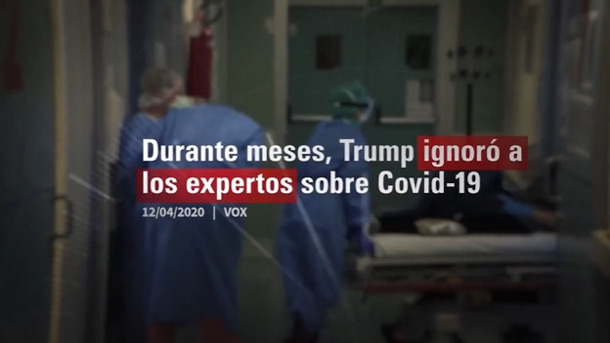 CURWOOD: Pete, we want to get back to you to talk in more detail about the Senate races, but briefly, which of the key Senate contests do you think are going to turn on the response of Black and Brown voters, at the margin of course?

MAYSMITH: Of course. In Michigan, Gary Peters, an incumbent Senator, big pro-environment champ, we want him back to cast pro-environment votes in the US Senate; Black voters are going to play a really important role in that race to help making sure that Gary Peters is reelected to the Senate and defeats his anti environment opponent. And then looking to Arizona, Mark Kelly is looking to unseat an anti-environment Senator. Her name is Martha McSally. And of course Arizona has a high number of Latino voters, high percentage of Latino voters, and so Latino voters are going to play an absolutely vital role in that US Senate race in Arizona. North Carolina has got a really tight hotly contested Senate race, Cal Cunningham is a pro-environment champ. Heavy influence of Black voters in North Carolina, virtually all everything we're doing in that state is targeted to Black voters to support and turnout for whether it's Joe Biden or Cal Cunningham. So those are three US Senate races: Michigan, Arizona, and North Carolina, Steve that I would highlight where voters of color are gonna be really important to the outcome.

CURWOOD: Pete Maysmith is Senior Vice President of Campaigns with the League of Conservation Voters. Pete, thanks so much for taking the time with me today.

MAYSMITH: Absolutely, Steve, I really enjoyed the conversation. You have a great show and thanks so much for having me on.


Read more about the League of Conservation Voters here

Listen to our previous interview on "The Environmental Voting Gap"