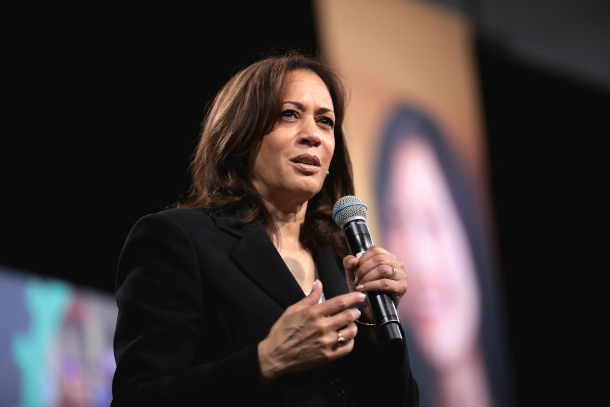 Former Vice President Joe Biden’s choice of Senator Kamala Harris as his running mate made history and highlighted the campaign’s focus on environmental justice. Tiernan Sittenfeld of the League of Conservation Voters joined Living on Earth's Jenni Doering to talk about Senator Harris’s environmental record and the ambition of the Biden--Harris campaign on climate change.

The Democratic presidential ticket is an historic one, with former Vice President Joe Biden’s choice of Senator Kamala Harris of California as his running mate. Both were among the more moderate candidates during the Democratic primary campaign. But on the issues of climate and environmental justice, Biden-Harris is one of the most progressive presidential tickets this country has ever seen, thanks in part to substantial pressure for climate ambition on the party’s left. The Biden campaign unveiled a $2 trillion climate plan in July, which aims for a carbon-free electric power grid by 2035, among other ambitious goals. And even more recently, Senator Harris introduced two bills focused on environmental justice. Vice president Biden and Senator Harris spoke on August 12 at their first event together as a unified ticket, in Wilmington, Delaware. 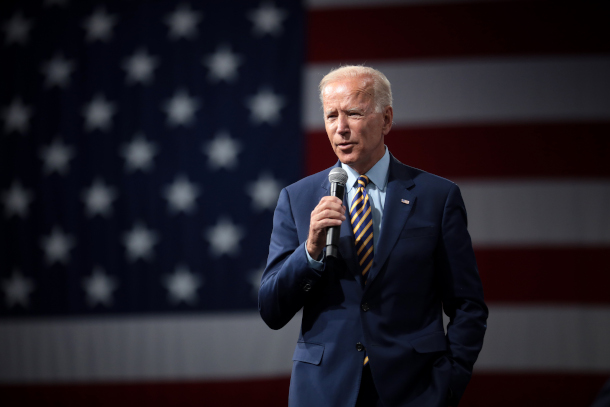 BIDEN: As attorney general of the largest state in the country Kamala took on Big Oil, who wanted to pollute without consequences. The Biden--Harris administration is going to meet the climate crisis, protect the health of the American public. Along the way we are going to deliver jobs, good paying jobs.

KAMALA: And that is exactly what we are going to do. We'll create millions of jobs and fight climate change through a clean energy revolution.

DOERING: So Tiernan, at the League of Conservation Voters, you and your colleagues put together an environmental scorecard based on how politicians vote in Congress. Senator Harris's current lifetime score is 91%. And in 2019, she was ranked at 71%. So why did she receive a somewhat low score for that year? 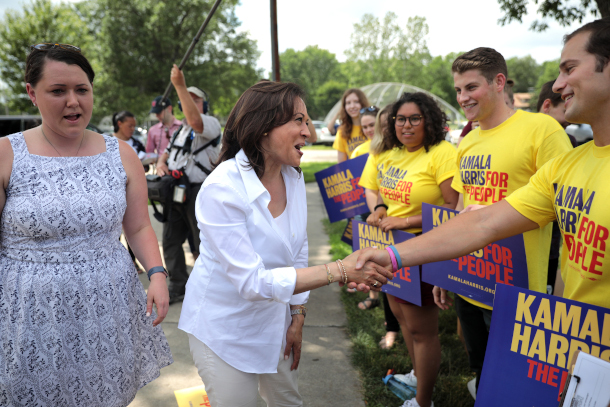 SITTENFELD: Thank you for asking you about the national environmental scorecard. We are really proud to have been putting that scorecard out for our entire 50 year history. It's considered the gold standard for how members of Congress vote when it comes to the most pressing environmental and public health issues of a session. And Senator Harris received a perfect score of 100%. In 2017 and 2018, her first two years in the Senate, her score dropped because she missed four votes while she was running for president and we are confident that she would have voted pro environment had she been there. And I would also say that when it comes to the environment, and then comes to public health, we have clear champions who care so deeply about these issues and who get how much of the climate crisis is connected to racial injustice. We see how this current administration is ignoring science across the board. They're not listening to the experts yet we contrast that with Vice President Biden, Senator Harris, who are going to trust the experts who believe in science, who will do what is in the interest of our environment and our health and fight for climate justice at every opportunity. 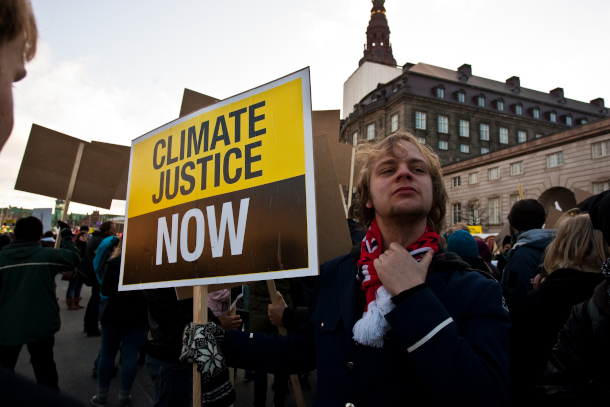 SITTENFELD: Senator Harris is extremely focused on environmental justice. She started an environmental justice unit at the San Francisco District Attorney's Office to more aggressively pursue environmental crimes which we know disproportionately impact black, indigenous and people of color. As a US Senator, she's been the leader on the Clean School Buses Act to electrify our nation's school buses. LCV's CHISPA Program has been working for years in communities to push for electric school buses because the diesel pollution from buses has many negative health impacts on our kids and especially on children of color who are even more vulnerable to this. In the Senate she's the lead sponsor of the Climate Equity Act that would give frontline communities and communities of color, a seat at the table and a really important voice from the get-go in policymaking that is centered on environmental justice. She's also very focused on holding both policymakers and polluters accountable. She recently helped introduce the Environmental Justice for All Act which is a landmark comprehensive bill that was developed with input from environmental justice leaders and communities. This was her plan that she put out her climate plan was centered on environmental justice. So I would say it's clear that this is a passion for Senator Harris. And it's also something that has been important to Vice President Biden, he had put out a climate plan that was very strong in June of 2019. He then built on that plan, with additional climate commitments that are more ambitious, and also additional environmental justice commitments. And we know that they care deeply about these issues. They have been listening and learning from environmental justice leaders across the country. And this all comes not a moment too soon, because we are not just talking about some distant threat of the climate crisis. We're talking about toxic pollution in frontline communities and communities of color for decades. And this absolutely has to stop we need to rebuild our economy in a way that is more just and more sustainable. And that really is focused on these frontline communities.

DOERING: A couple of the most controversial issues in the primary campaign where fracking and nuclear energy. What are Senator Kamala Harris's views on these issues? 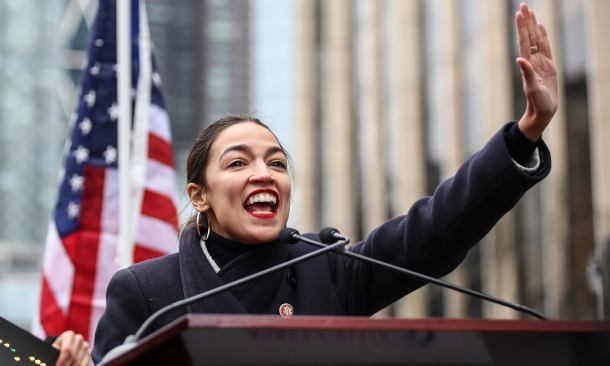 In early August 2020, Senator Harris (D-CA) and Representative Alexandria Ocasio-Cortez (D-NY) introduced the Climate Equity Act, which would create an Office of Climate and Environmental Justice Accountability and require officials to consider the impacts of environmental legislation on low-income communities. (Photo: Dimitri Rodriguez, Flickr, CC BY 2.0)

SITTENFELD: I think what's important to stress here is that Joe Biden and Kamala Harris have so much in common when it comes to their focus on accelerating our transition to clean renewable energy like wind and solar. And they're basically the opposite of where the Trump administration would take us. When it comes to nuclear energy. We know that Senator Harris opposes storing nuclear waste at Yucca Mountain. She has signed on to a letter with senators Catherine Cortez Masto, to require that the federal government requests Nevada's consent before storing nuclear waste at Yucca Mountain. So we think that's very important. Obviously, the nuclear energy industry has been heavily subsidized and it's at taxpayer expense. So that said, I think that Vice President Biden he does have a place for advanced nuclear in his climate plan. And we believe that she's expressed an openness to a ban on fracking. What we know is that Senator Harris and Vice President Biden share the goal of phasing down the burning of fossil fuels around the world as quickly as as possible, we know that they are rock solid hundred percent committed to addressing the climate crisis and extremely focused on climate solutions. That's why they're talking about them so much on the campaign trail. That's why they're going to lead on them from day one.

DOERING: Tiernan what would you say to voters who were strong supporters of more progressive candidates during the primary like Senator Bernie Sanders, who may not feel that the Biden - Harris campaign is quite ambitious enough on climate environment, other issues? I mean, I've been hearing anecdotally about some young voters actually planning on voting third party because they're just not excited about this ticket. 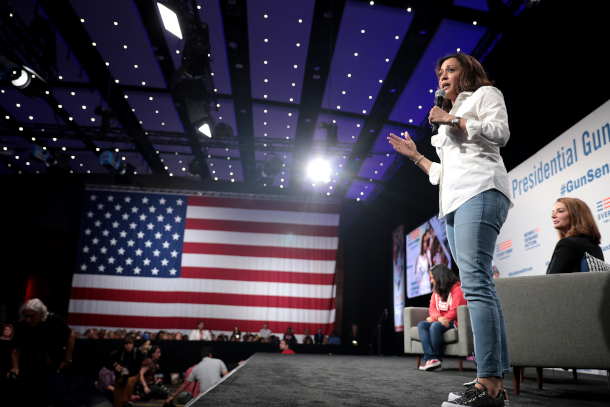 SITTENFELD: For anyone who isn't feeling excited about this ticket. I would encourage them to actually take some time to read through the plans that the Biden campaign has put out to watch some of the speeches. Vice President Biden spoke at an LCV event, the footage is online people can see it and talked about holding fossil fuel companies accountable, talked about restoring our climate leadership. on the world stage, talked about the absolute imperative of addressing environmental injustices that have continued in this country for far too long. From conversations with the Vice President, from conversations with Senator Harris, I know that they care deeply about these issues. I know that they're going to prioritize them, and their leadership could not be in starker contrast with the most anti environment administration we have ever had. The stakes have truly never been higher. So for anyone who's thinking, Oh, it doesn't matter that much, or my vote doesn't matter. I think we have 81 days to go, we need to be all out. I don't think any of us want to wake up on November 4 and feel like if we had only voted if we'd only made some more phone calls to swing voters, or if we'd only send a few more texts like this is it the 2020 elections are absolutely our last best chance to confront the climate crisis and it is going to require all of us being all in to make that happen.

DOERING: So if they're elected this November, what would you need to see from the Biden--Harris presidency to show that they're living up to their promises on climate and environmental justice? 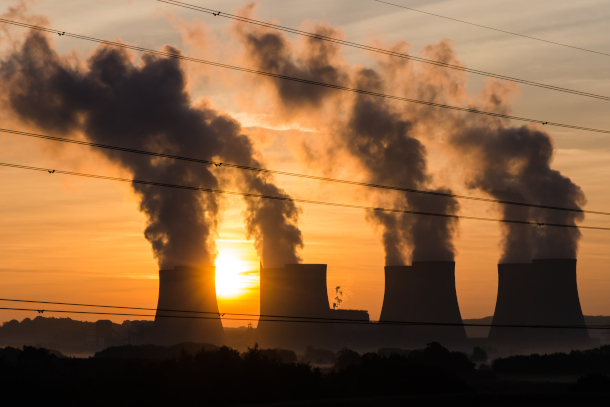 SITTENFELD: So we expect great things from them when it comes to climate solutions and environmental justice. And there's a lot of both executive actions that they can take on day one. They've both talked about restoring the United States international leadership. Clearly, getting back into the Paris Climate Agreement is just the first step there are more than 100 really atrocious environmental rollbacks that the Trump administration has pursued. Gotta undo all of those, and then really go big when it comes to re-envisioning and rebuilding our economy and putting people back to work. There are so many opportunities to create millions of good union jobs in the clean energy industry, rebuilding roads and bridges and green spaces and water systems. Clearly, the Obama Biden administration made so much progress when it came to making our cars and trucks more efficient. They were incredibly popular standards that were working, that are enabling cars to go further on a gallon of gas. So they're saving consumers money at the gas pump, they're creating jobs, they're good for the planet. Yet Trump inexplicably is working to rollback the clean car standards. There's so much more that we can do in terms of investing in transit and making buildings more efficient. So I think what's clear is that the solutions are there. They're common sense. What we need is the political will and that's why the 2020 elections 81 days from today could not be more important, because we absolutely have to elect environmental and public health champions who are going to look out for the communities across this country who so badly want a clean, safe, healthy environment for themselves, their children and their grandchildren.