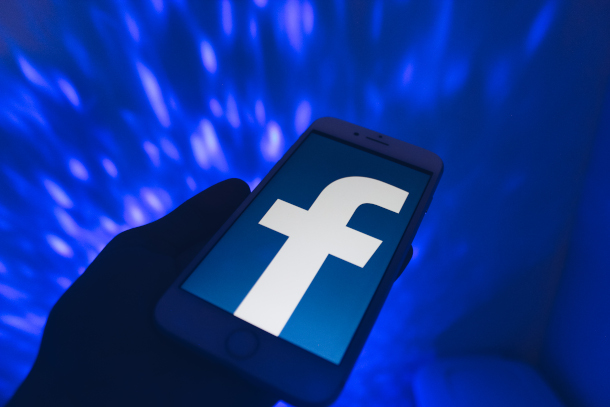 Facebook has come under scrutiny for its policies on notifying users about climate disinformation articles published as opinion pieces. (Photo: Book Catalog, Flickr, CC BY 2.0)

The Natural Resources Defense Council, Earthjustice and 350.org are joining more than 1000 companies in pausing their advertising on Facebook in July as part of the “Stop Hate for Profit” campaign. Climate journalist Emily Atkin, who writes the newsletter HEATED, joins Steve Curwood to discuss why these groups are taking a stand against the spread of racism, white supremacy and climate disinformation on this giant social media platform.

BASCOMB: From PRX and the Jennifer and Ted Stanley Studios at the University of Massachusetts Boston, this is Living on Earth, I’m Bobby Bascomb.

The Natural Resources Defense Council, Earthjustice and 350 dot org are joining more than 1000 companies in pausing their advertising on Facebook this month as part of the “Stop Hate for Profit” campaign. These three major environmental groups are demanding that Facebook take steps to curb the spread of racism, extremism and misinformation about climate change on its platform. Most other environmental groups, though, have yet to take a stand on Facebook policies on hate and climate denialism. Emily Atkin is a climate journalist and author of the climate crisis newsletter “Heated,” and she joins me now to discuss this divide. Welcome to Living on Earth.

ATKIN: Thank you for having me, Steve.

CURWOOD: So Emily, how did all this come about?

ATKIN: This came about one day when a reporter that I work with very frequently named Judd Legum came to me and pointed out a story that had just been published in E&E News, which is sort of like an industry publication. And the story was about this group called the CO2 Coalition. And it's this group in Washington, powerful, fossil fuel-funded group that argues that carbon dioxide is good for you, you know, we need more of it to breathe and the more we pollute, the healthier we are that kind of stuff. So they had published this op-ed in the Washington Examiner claiming that all climate models are wrong. And climate science is basically BS. They posted it on Facebook and Facebook's independent fact checking process kicked in. And fact checkers publishing scientists deemed the article false because it was obviously false. The CO2 Coalition went back to Facebook and said, "Hey, this is an opinion article. So there shouldn't be a false label on it." And Facebook said, "You're right and took it off." Because apparently Facebook has a policy saying that if you have an opinion piece, if it's an opinion piece, then it's not subject to fact checking rules. And Judd pointed out this article to me and said, "Is this important, do you think?" And I said, "Yeah, I think this is really important." And so we started our reporting from there.

CURWOOD: This is really risky for science, isn't it? I mean, right now we're going through this pandemic, where people are pointing to scientists are saying, well, that that's their opinion, and not really paying attention to the hard science behind what's going on. 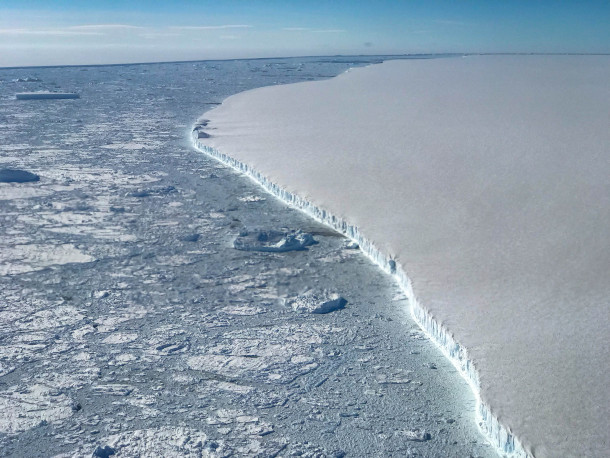 In 2017, researchers observed a giant iceberg the size of Delaware that had recently calved off of the Larsen C ice shelf. (Photo: NASA Goddard Space Flight Center, CC BY 2.0)

ATKIN: I think it goes beyond being risky for science. I think it's risky for public health. We know the consequences of spreading misinformation about epidemiology and about the way coronavirus spreads. It's the same when we're talking about climate change, which is also a public health threat. If we're allowing misinformation to be spread about climate change, we're threatening literally millions of people's health. And it's something that Facebook has so far refused to really grapple with.

CURWOOD: I mean, Facebook says, Look they shouldn't moderate their content, it's not a media company, but it's a public forum for free speech. What does that meant for climate deniers, do you think?

ATKIN: What I thought was the most compelling and important part of this whole story was that the CO2 Coalition? You know, fossil fuel industry-funded climate denial group said that they were really thankful for Facebook's opinion content loophole, because now they could use it to spread their climate denial, because before they weren't getting traction with mainstream media anymore, you know, reporters from the New York Times and The Washington Post aren't reaching out to them for the other side of the climate story now. And finally, you know, they found what they believe is an ally in Facebook. So if that's what Facebook wants to be, then that's what we need to think of it as.

CURWOOD: Now, at the same time, Facebook has been, quote, fact-checking climate scientists like Katharine Hayhoe down there in Texas, right. As I understand it, they blocked Katharine Hayhoe’s videos related to climate research because they said they were political and she had to give certain information to register them. In other words, how fair is it to say that Facebook’s perspective in this case seems to be that well, science is political?

ATKIN: It's kind of backwards, right? On one hand, they're saying well, this scientific content his opinion, so it doesn't need extra fact checking or extra certification information. And then they say on the other hand, well, this climate information is political. And so we need all of this other certification information. And it's a basic misunderstanding on Facebook's part on what science is. It's neither opinion nor political. It's the best process that we have to determine objective truths. And I don't think it's controversial to say that that should be something that our biggest social network, our biggest purveyor of information, should understand in its policies. And right now it doesn't appear to. 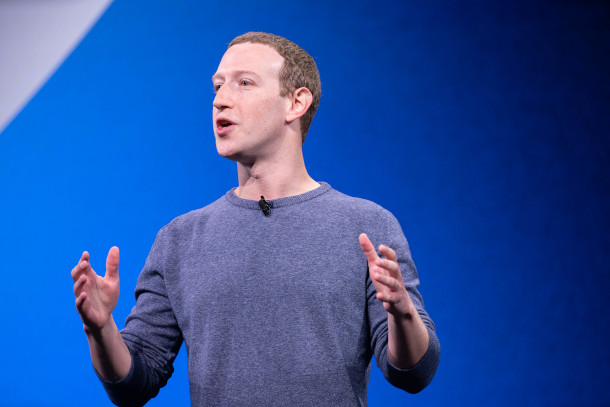 CURWOOD: Now as many advertisers are boycotting Facebook to try to compel them to take a stronger stance on racism and hate speech. Some environmental groups, I'm thinking of Earthjustice and 350.org have joined that campaign and added their demands that Facebook take steps to limit climate denialism as well, but other environmental activists such as Sierra Club USA have not joined in. Talk to me about that divide, please.

ATKIN: It's a really interesting question that these environmental groups have to deal with, which is how do they want to spend their money? Do they want to spend it on a platform that actively is spreading climate change disinformation but at the same time really helps them get their message out? I think it's really hard for a lot of nonprofits and charities and advocacy groups to balance those concerns. I think it's important to note that the ongoing Stop Hate for Profit campaign specifically says they're only asking companies, businesses, corporations to boycott Facebook for the month of July. They're not asking nonprofits or advocacy groups to do it because they know that's a really tough choice--to ask them to stop spreading a message of social justice, climate justice, right. At the same time, the Stop Hate for Profit campaign welcomes nonprofits and advocacy groups to join if they would like to, there's a faction of environmental groups that say we should be putting our money where our mouth is and this is not where movements are built movements are not built on Facebook. You know, they're built in the real world. But there are others that say Facebook is the is the best place that we operate right now, especially during a time of coronavirus.

ATKIN: Yeah, Facebook has taken a number of actions against hate speech and violent groups and also against coronavirus disinformation. And I think that that's why climate advocates and people who understand climate science see sort of an unequal treatment here. Facebook doesn't seem to recognize that when you spread misinformation about climate change, it's the same detrimental effect as spreading misinformation about a health threat or racism honestly, because climate change affects black and brown communities and minority communities in such a more catastrophic scale than affluent white people. I can't really stress this enough. If we don't act on climate change--this isn't my opinion, this is the science--people will die. A lot of people will die and mostly black and brown people will die. And when we're allowing this information to be spread about that we're allowing that to happen. 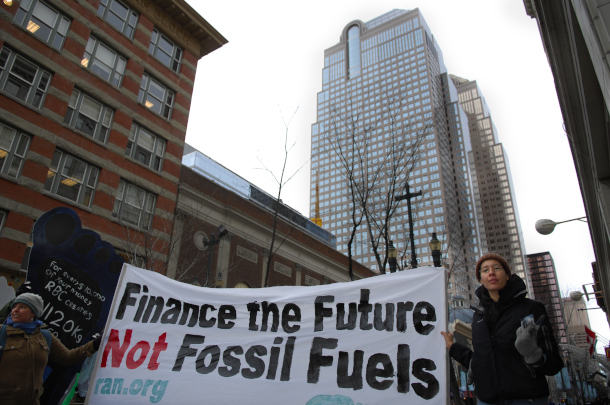 Protests in downtown Calgary focus on the impact of individual investments in the five major Canadian banks on climate change. (Photo: Visible Hand, Flickr, CC BY 2.0)

CURWOOD: Emily, before you go, to what extent do you think people who are concerned about the climate might start to boycott companies that advertise on Facebook? Some companies have stepped back from Facebook over the racism and violence--maybe companies might take a second look, if their consumers and their brands start to get battered by public concern?

ATKIN: You know, climate activists have organized successful boycotts of banks that fund Arctic drilling, right, they successfully pressured the financers of the climate crisis to stop financing really dirty projects, right. And it's becoming a trend in environmental and climate activism to start targeting, not the fossil fuel companies, not the problem itself, but the companies that fund the problem if that makes sense.

CURWOOD: Well, you know, famously a number of years ago, President George W. Bush said that we are addicted to oil. So it sounds like the boycotts aren't really focused so much at the addicts as the enablers.

ATKIN: Exactly. They recognize that oil companies don't have an incentive to change unless their wallet is threatened. Right. That's why this Facebook ad boycott has made such a stir. You yelling at Facebook online doesn't really matter to Facebook. But you taking away Facebook's money matters.

CURWOOD: Emily Atkin is a climate journalist and author of the climate crisis newsletter "Heated." Thanks so much for taking this time with us today, Emily.

ATKIN: Thanks for inviting me.

After the program was recorded, Facebook provided the following statement:

"When someone posts content based on false facts on our platform, even if it's an op-ed or an editorial, it's still eligible for fact-checking. We're working to make this clearer in our guidelines so that fact-checkers can use their judgement to better determine whether something is an attempt to mask false information under the guise of opinion or actually opinion content."