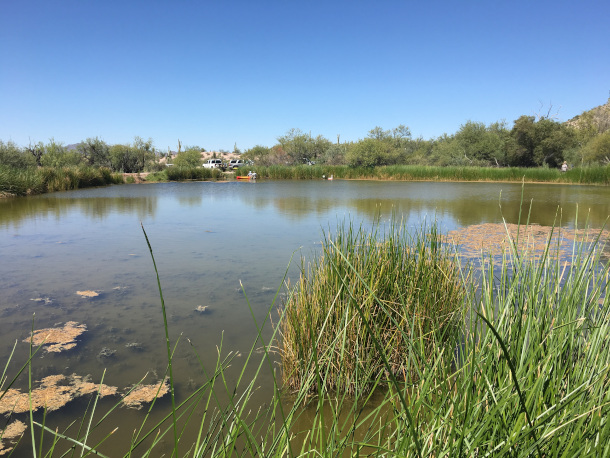 Quitobaquito Springs is home to two desert-native endangered species, and groundwater drilling for the border wall could deplete the aquifer that feeds the spring that many rely on for water. (Photo: Kevin Dahl, NPCA, CC BY 2.0)

The Tohono O'odham Nation has been confined to a tiny fraction of the lands it once held in the desert Southwest. Now the Trump Administration’s border wall expansion threatens to further damage and restrict their access to sacred and archeological sites. Rafael Carranza, a journalist for the Arizona Republic and USA Today, spoke with Living on Earth’s Bobby Bascomb.

CURWOOD: The pandemic and economic slowdown have not stopped the construction of more sections of a wall along the US border with Mexico. The border wall was a key promise of President Trump’s election campaign, and in his bid to keep that promise, dozens of environmental laws from the Endangered Species Act to the Clean Air Act were suspended to fast track construction. Some Native Americans say that, without such laws in place, their sacred ancestral lands, including burial grounds, have been desecrated. The Tohono O’Odham nation along the border in Arizona is objecting to the bulldozing of these lands. Rafael Carranza writes for the Arizona Republic and USA Today and visited several Native American sites where wall construction is moving forward. He spoke with Living on Earth’s Bobby Bascomb.

BASCOMB: I understand that you visited several tribal areas that will be impacted by the border wall, but they're considered sacred by the tribal people who live there, the Tohono O'odham. Can you tell me about that trip, please?

CARRANZA: Yeah, so all of this happened before the coronavirus pandemic. And there are numerous archaeological historical cultural sites throughout the Arizona desert that are very important to the Tohono O'odham Nation here. These are protected lands. It's you know, desert wilderness. But these contain signs of the early tribal life that the O'odham people carried out for centuries and centuries. So in January, we had the chance to visit these sites that are located at the Organ Pipe Cactus National Monument, as well as Cabeza Prieta National Wildlife Refuge including Monument Hill, Quito Baquito Springs which is a natural source of water for dozens of miles around. There's also a ceremonial site called Las Playas and an unnamed burial site that's located immediately next to the border wall. So all of these are on the path of construction. And there's a lot of very valid concerns that the tribe has brought up about, you know, how the government is going about in treating some of these sites. And, you know, frankly, like their involvement as well. They want to be involved in the whole process, because they understand that you know, these are their ancestors, this is their culture and their heritage.

BASCOMB: Can you please give me a little bit of history about the Tohono O'odham in this region and the cultural importance of the land for them? 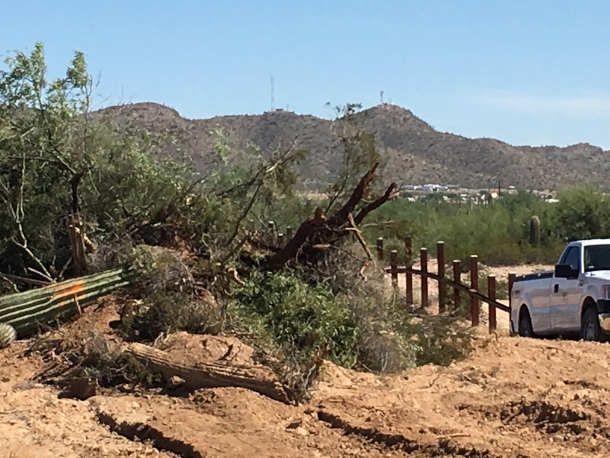 CARRANZA: Yeah, so the Tohono O'odham people, they have lived in these areas for centuries and centuries. They've inhabited these lands before there was the United States and before there was a Mexico. So a big part of their culture involved the traveling of the desert. They would set up and live in areas following the water, following a lot of the resources of the land. It's a very parched area so it was a constant struggle, you know, looking for food and water and so they would travel vast territories stretching from the Colorado River on the Arizona-California state line, all the way to the San Pedro river in the eastern part of Arizona, and they would stretch as far north as Phoenix as far south as the state of Sonora. So it's a very, very large territory that compromises the Sonoran Desert. They've lived here for many, many centuries and over time, you know, the US government created the reservation for them close to the US-Mexico border. And so because they traveled so extensively throughout the region, once the borders were instituted, what ended up happening was that a large portion of the tribal members ended up being in the United States, but then a large portion of them remained in Mexico. And unlike the United States, the population of Mexico doesn't have a reservation or protected lands that are, you know, designated exclusively for the tribe. So that has created a lot of issues with the community because access to a lot of those historical sites and a lot of the pilgrimage routes and a lot of the areas that are important to their culture are increasingly harder to get to on the Mexican side. And increasingly now in the United States as well, it's because of all the border security mechanisms in place. 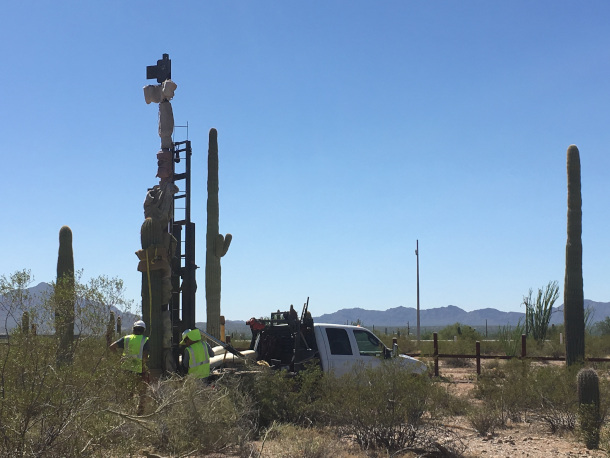 BASCOMB: So the nation of people was separated by an international border, which of course, was difficult and now from what I understand they want to improve the border wall that runs through the area, how will that affect them?

CARRANZA: The US government has really pursued and the Trump administration in particular has been aggressive in erecting a new design, a new type of barrier, along the entire length of the US Mexico border, at least in areas where it's easier for them to get to at the moment. These are sites that are not within the reservation, but they are protected federal lands. So the US government already has control of them. So it's relatively easy for them to issue the waivers on some of these laws and then expedite and move construction, you know, full speed ahead. And they have in fact been doing that for the past few years now. Because this construction has been ongoing so rapidly. The tribes have complained that they are just not being taken into account, that their voices are not being heard and their concerns are not being addressed when it comes to the erection of these new taller barriers in a lot of these sites. That you know previously already had something, they may have had a vehicle barrier, so they have shorter steel slats, but the Trump administration has been pushing 30 foot tall bollards, you know which tower above anything else that you would see in these parts of the border and in the desert. And I'll have to point out that you know, the Tohono O'odham Nation, because they do enjoy a lot of tribal sovereignty and you know, they wield a lot of influence and control over the reservation itself, they've been able to keep the United States from building any sort of barriers like 30 foot tall bollards within their reservation. A lot of the construction has really focused on the areas outside of that reservation like areas that the government already controls. And so there are currently no plans to do any border wall construction on the Tohono O'odham Nation itself because the nation has not allowed it. And it's very likely, you know they'll continue resisting as long as they can. What they do have is some of the towers and cameras and sensors and some of the other technology that they're advocating, you know, could be better served, but they don't have any border wall construction itself on their lands.

BASCOMB: And from what I understand the new border wall that's being constructed or the improvements to it, they are actually unearthing human remains. It's an ancestral burial ground for the Tohono O'odham. How's the tribe responded to that? 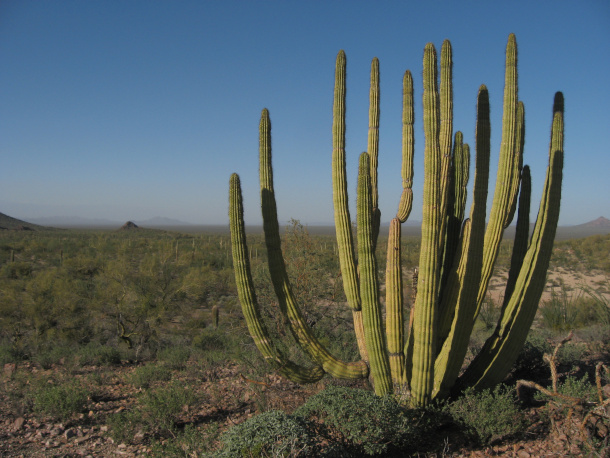 The Organ Pipe Cactus National Park in Arizona is the only area where Organ Pipe Cactus grows wild. The Tohono O’odham Nation is one of the many tribes which considers this land sacred. The construction of the border wall involves heavy machinery that has already damaged wildlife and cacti in the Arizona desert. (Photo: Ken Lund, Flickr, CC BY SA 2.0)

CARRANZA: Yes. So in October, the contractors that were preparing to build the border wall, that organ pipe, as they were, you know, doing those preparations, they came across some possible bone fragments. And so they did some testing, they determined that it was actually human remains. So whenever these remains were found back in October, the work was stopped and the government was able to recover the fragments and they're in the custody of the National Park Service, who will then hand them over to the Tohono O'odham Nation. But the nation and the tribe, they've really been very concerned that that's just one reported instance but that there could be many more instances where the contractors or the construction workers don't know what to look for and so there's concerns that their heritage will be irreparably damaged. And I'll mention that, you know, the US government does have environmental monitors and cultural monitors that they hired to have on site in case that they do come across any endangered species or cultural artifacts and so on, but they only have one person that, you know, monitors the entire swath of construction in this entire desert region where where the project is ongoing now. So, the tribe has been very concerned that things will fall through the cracks and that ultimately these sites will be damaged and that you know, a lot of the artifacts that are found there will be lost or damaged forever.

BASCOMB: So how likely is it at this point that the wall is going to go on as the government plans or might there still be something that puts a stop to it, considering this cultural significance of the area that they're planning to build on?

CARRANZA: You know, there seems to be very little indication that the government will change their plans or alter their plans in any significant way or fashion. They are moving ahead and proceeding as they had delineated from the beginning. The goal is to have all of these barriers here and Arizona finished pretty close to the election in November. So they're, you know, moving full speed ahead and the concern that environmentalists and the tribe are bringing up is that because, you know, they seem to be moving with this particular deadline in mind, that they're just not taking them into account or consulting with them, because that would require more time and could delay a lot of their efforts. And so environmentalists and community groups are hoping that the courts will be able to step in through one of the several lawsuits that they filed. They're hoping that the federal judges will either issue an injunction barring the government from any additional construction or any other type of measures that will stop the construction at the moment. But to date we haven't seen any of that.