Farmworkers and the Virus

A campesino holds up a poster that reads “Field workers were designated as essential during the pandemic. I am thankful and proud to feed the country, but we also need essential benefits.” (Photo: Courtesy of UFW)

Migrant farmworkers are considered essential workers during the COVID-19 pandemic and if they don't continue to tend and harvest the crops that feed America, there will be food shortages. Many farmworkers face special risks during the pandemic, as they work in crowder's conditions and more than half of them are undocumented, with poor access to healthcare and federal aid. Marc Grossman, a spokesperson for United Farm Workers of America, joins Host Bobby Bascomb to talk about how the COVID-19 pandemic is affecting migrant farmworkers in the United States.

BASCOMB: And I’m Bobby Bascomb.
Meat supplies are getting tight in the US as processing plants have become hotspots of the COVID-19 virus, with at least 17 workers dead, thousands more sickened and dozens of meatpacking plants shut down. Meatpacking assembly lines are crowded with low wage workers, many of them are undocumented immigrants, much like the workers who harvest and process the produce grown in the US. United Farm Workers spokesman Marc Grossman says farmworkers are also at high risk in the face of the pandemic. Marc Grossman joins me now, welcome!

GROSSMAN: Pleasure to be with you.

BASCOMB: So please tell me first about the average farmworker in the United States. Who are they? Where are they from and what's their daily life like?

GROSSMAN: Well, even before the pandemic hit farmworkers faced daunting challenges. We know that, you know, they're mostly immigrants today, in very low paying jobs with the exception of a small number that are protected by union contracts. They have few if any benefits, they must live, commute and work under very close quarters often in substandard and unsanitary and crowded conditions. We know from the US Department of Labor that at least half are undocumented, which makes them even more vulnerable to abuse. But all of these factors make them uniquely vulnerable to the pandemic. And when the pandemic began, the UFW first went directly to individual growers who were under a union contract and some companies under contract change, picking practices and styles. Even if productivity was reduced to enforce social distancing, implemented other social distancing practices had training including crew meetings to educate workers about what they should do. But those responses only highlight the urgent need for more widespread action at non-union companies and there although some employers are stepping up, many are not. And you know, we've all seen the shelves of the supermarkets, on paper goods and toilet paper and so on empty, but imagine if the pandemic takes hold in the farmworker community what would happen to the nation's food supply?

BASCOMB: So those sound like really good common-sense precautions to take for essential workers who again, you know, are providing food for the country, but how common would you say those types of precautions are within the industry?

GROSSMAN: You know, we have an expression that the laws on the books are not necessarily the laws in the fields. California leads the nation in protective laws and regulations for farmworkers. Everything from minimum wages and hours to pesticide protections to sexual harassment, but there is too often a gap between what the laws and the regulations and the government agencies require and the actual enforcement and implementation in the fields. 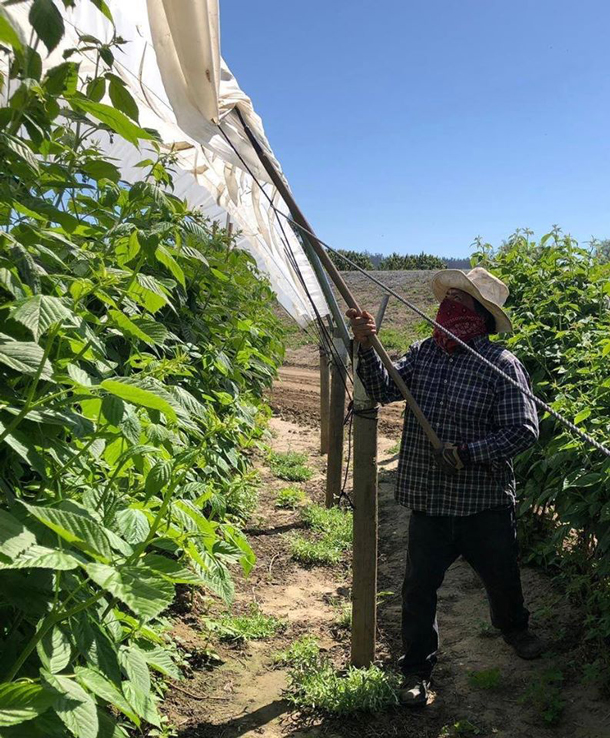 BASCOMB: And a lot of these workers are here temporarily from other countries and I assume have temporary housing. What does that look like for them?

GROSSMAN: Well, the housing and these are H2A guest workers is usually barracks-style housing, where people are packed in closely together in beds or bunks. It's very difficult to enforce social distancing. And if someone gets sick, unless special preparations are made to quarantine them, then that becomes a big challenge too.

BASCOMB: And if they do get sick, do they have access to health care while they're here?

GROSSMAN: No, you know that that's a big problem because the great majority of farmworkers and non-union companies do not have health care. And, you know, one of the problems on paid sick leave is that some growers have made it difficult for workers to actually claim it. Sometimes they require a doctor's note. But since most workers have no health care, they don't have doctors, or some companies have a waiting period 30, 90 days before new workers can claim sick leave benefits if they exist. So all of those things represent challenges that must be overcome quickly if paid sick leave is going to become a reality. 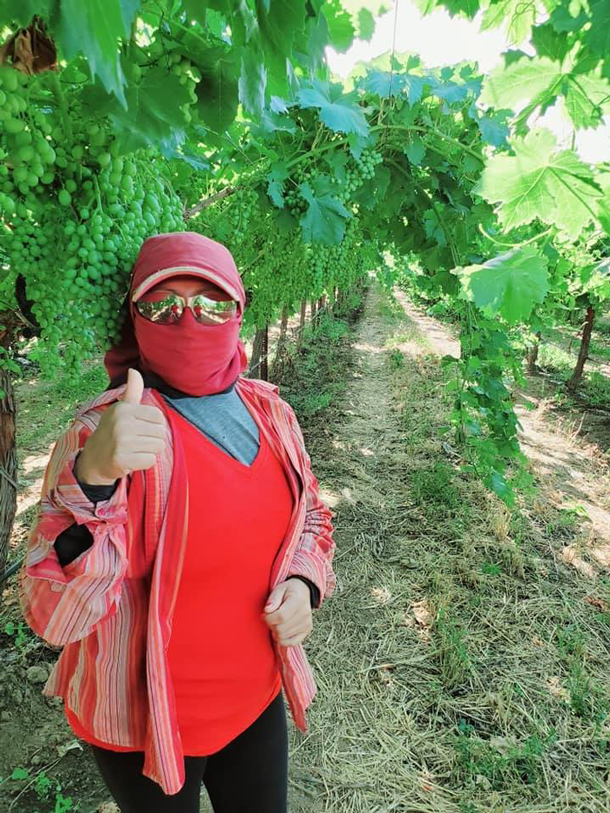 A campesina harvesting grapes on a California farm. California grapes form part of an industry approximately worth $2 billion. (Photo: Courtesy of UFW)

BASCOMB: Now, you said that as many as 50% of farmworkers are here illegally, how possible is it then that they're putting themselves at even higher risk of deportation right now going to work when there are so many fewer people out and about in the world? Is that something you're concerned about? You know?

GROSSMAN: When on the UFW social media platforms, many workers respond to the news that they're now officially considered essential workers with anger, because they say, well, now they think we're essential workers. But they don't have essential benefits and protections that other essential workers have enjoyed for some of them for generations, minimum wages and hours, The Fair Labor Standards Act the federal law, from the New Deal granting industrial workers something as simple as overtime after eight hours a day excludes farmworkers, back in 1938. And it was only in two 2016 that the UFW got a law passed in California that provides phased in overtime after eight hours a day over a four year period. So these essential workers often do not have the essential benefits that protect everybody else. Hazard pay, hundreds of thousands of workers in the retail food industry have been provided sometimes $1, $2 an hour or more in additional pay, because they're putting their lives at risk by going to work stocking the supermarket shelves. Well, farmworkers are also essential workers and they take their lives in their hands when they go to work. Why shouldn't they get the same recognition? 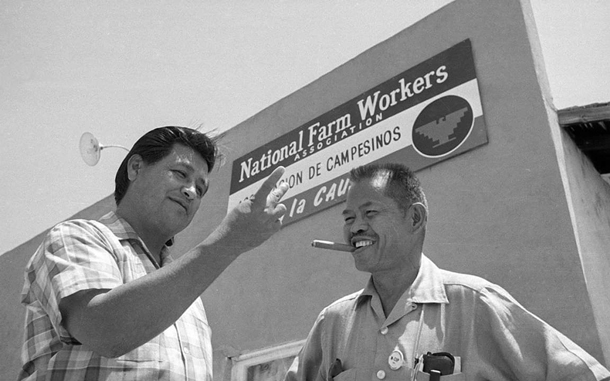 Cesar Chavez and Larry Itliong were leaders in the Delano Grape strikes of 1965. The peaceful strike involved both Mexican and Filipino farm workers protesting against the exploitation of farmworkers by Delano-area vineyards. Thus began a five-year grape strike and later a three-year international boycott of California table grape. (Photo: Courtesy of UFW)

BASCOMB: And how concerned are they that while going to work and performing this essential service, they might get deported on their way? I mean, is ICE, it's still targeting these workers just as much as they were before the pandemic?

GROSSMAN: I believe ICE has indicated that they're holding up on enforcement actions in the interior of the country. But remember, for years there has been a palpable fear by foreign workers just in going to work. So, you know that in addition to the danger of exposing themselves and their family members to infections, many undocumented farmworkers find it very difficult to abandon their fear of being apprehended and deported. You know, last December, the US House of Representatives passed a bill for the first time in decades an agricultural immigration bill that would allow undocumented farmworkers already in this country to earn the legal right to permanently stay by continuing to work in agriculture. The bill is now in the United States Senate, and it was passed on a bipartisan vote, 34 Republicans in the House voted for the measure and it would go along way in eliminating the fear and the terror that undocumented farmworkers live with every day.

BASCOMB: So I mean, it seems like we're in a situation where these farmworkers are considered essential today but could still be deported six months from now when hopefully this pandemic has passed and things go back to normal. Is that really what we're looking at?

GROSSMAN: We hope that Americans use the pandemic as an opportunity to really examine themselves and their society, and equity issues like the denial of essential rights and benefits to farmworkers. That has gone on for too long. So we're hoping that people use this as an opportunity for reflection, much-needed reflection on eliminating the inequities and the injustices that have plagued farmworkers and other people who are vulnerable.

BASCOMB: Marc Grossman is a spokesman for United Farm Workers and former assistant and speechwriter for Cesar Chavez. Marc, thank you so much for taking this time with me today.

GROSSMAN: My pleasure. Thank you.

Informational Video by the California Farm Bureau for Farmworkers

The California Department of Industrial Relations Division of Occupational Safety and Health is the state government agency that enforces safety regulations in California.

Read the Lideres Campesinas Letter to Governor Newsom, urging the state to allow healthcare professionals to conduct educational orientations on COVID-19 in the fields