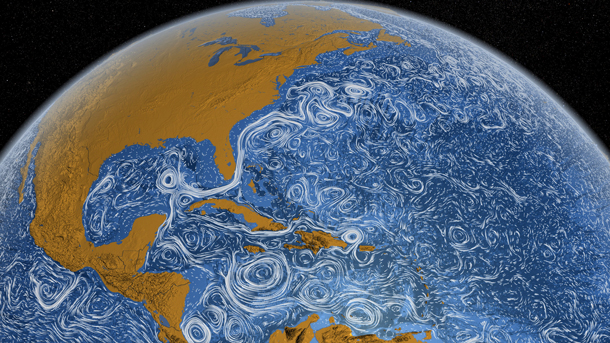 Ocean surface currents around the world during the period from June 2005 through December 2007 near the Gulf Stream. (Photo: NASA Goddard Photo and Video, Flickr, CC BY 2.0)

Ocean currents play an essential role in redistributing nutrient-rich waters and heat energy around the globe. New research from the Alfred Wegener Institute finds that global warming is pushing these vital parts of the ocean circulatory system poleward. Amy Bower, a Senior Scientist at the Woods Hole Oceanographic Institution, joins Living on Earth’s Jenni Doering to discuss the impact shifting ocean currents could have on fisheries, climate, and more.

Seventy percent of our planet is made up of the oceans, and its major currents move vital nutrients and heat around the world. For instance, the Gulf Stream warms the beaches of the east coast of the US and then loops across the North Atlantic to bring a mild climate to the British Isles. Now research from the Alfred Wegener Institute finds that climate change is pushing some of these ocean currents closer to the poles. Amy Bower is a Senior Scientist at the Woods Hole Oceanographic Institution. She spoke with Living on Earth’s Jenni Doering.

DOERING: So first Amy, I wanted to ask you why are these ocean currents so important to life on Earth to the oceans, the health of the oceans, and also to life on land.

BOWER: Ocean currents are really critical to life on Earth, both in the oceans and on land. They redistribute the heat and energy that comes in from the sun, because of the shape of the earth being a sphere. As you go to the north and south poles. The sun rays are a bit of an angle and so the energy from the sun per square mile is less. If the ocean currents and the atmosphere did not take some of this extra heat that comes to the equator and move it to the poles. the equator would get hotter and hotter and hotter and the poles would get colder and colder, colder and life as we know it could not exist. The ocean currents also transport nutrients and dissolved oxygen which are needed for microscopic plants together. grow in the upper layers of the ocean where there's sunlight and the oceans redistribute oxygen and nutrients around to various locations,

DOERING: Can we take a step back and look broadly at how the ocean currents work on Earth?

BOWER: Ocean currents on Earth are driven in two different ways. One way is by the winds blowing over the oceans. This is the one that most people would be familiar with, because the winds are most important in driving the surface currents. And some of the currents they might be familiar with include the Gulf Stream, which flows northward off the east coast of the United States. The second way is by differences in density when some waters in the ocean are denser than others that will force the denser waters to try to move under the lighter waters. And that also generates especially deep ocean currents.

DOERING: So what's happening now based on this new research and research in the past on global ocean currents, and how they're shifting poleward. Why is that happening?

BOWER: Well, these authors argue and show evidence that because of the increasing heat, the winds in the atmosphere are shifting as well. They are shifting poleward. And because the winds are responsible for where the surface currents are, as those winds shift, the surface currents will also shift. And so they are showing evidence that there has been a poleward shift of some of the biggest currents and the largest covering the most area. There's been a shift. It's a small shift, but they argue that it is an indication of bigger shifts to come in the future.

DOERING: And what currents are we talking about that are shifting poleward?

BOWER: One example of these poleward shifting currents that they argue is what's called the western boundary currents. These are intensive currents on the west. Western boundaries of all the major ocean basins in the North Atlantic. That current is the Gulf Stream. And there are others around in the southern hemisphere. And those western boundary currents and their eastward extensions kind of out into the middle of the ocean are what these authors are saying are pushing poleward. So that means towards the north pole in the Northern Hemisphere and towards the south pole in the southern hemisphere.

DOERING: Fascinating. So I understand these ocean currents, they're huge. They're basically invisible to the human eye, right? What kinds of tools can scientists use to actually study how they work and how they're moving poleward?

BOWER: There are multiple ways the authors of this paper have used one of our most valuable tools for studying the ocean on a global scale. And those are satellites flying overhead that measure the ocean temperature. They also indirectly measure the ocean currents at the surface. They give us the broadest possible picture of what's happening all over the globe at the same time, because every few days, you get a complete snapshot of the surface temperatures and the surface currents.

DOERING: So we've already heard a little bit about atmospheric changes because of climate change. And I'm curious about how that relates to the oceans, and how ocean currents moving poleward how's that going to affect hurricanes and other kinds of storms that we experience? 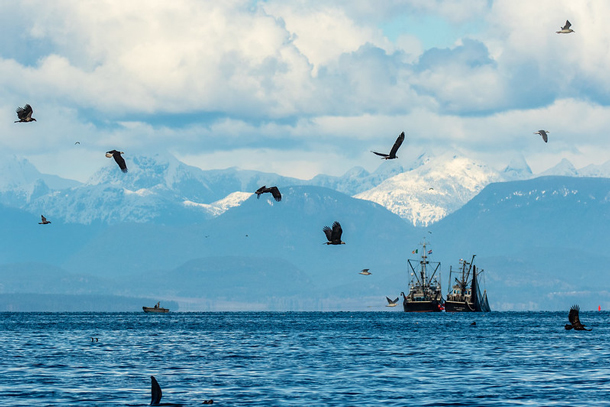 Climate fluctuations lead to shifts in ocean circulation that can cause fish populations to rise and fall. (Photo: Deborah Friedman, Flickr, CC BY-SA 2.0)

BOWER: The ocean currents, some of them carry a lot of heat. And the heat is the energy for many atmospheric storms. That includes hurricanes, cyclones, they derive a lot of energy from the heat carried by the oceans, because the storms are more likely to develop into severe storms where there's more heat available. In that case, it's not so much the shift in location, but just the physical warming of the currents may lead to stronger hurricanes.

DOERING: So how could changing ocean currents actually affect fisheries as well?

BOWER: Ocean currents transport nutrients, how they transfer those nutrients around determines where the most productive areas in the oceans are. So if the ocean currents shift, that means they're going to carry their nutrients elsewhere. And so a fishery that was, depending on the ocean transport of those nutrients to a particular region may find that those nutrients aren't coming there anymore. And that fishery will decline, the fishery may move to a different area, maybe one near where people live, maybe not. So again, if these currents shift around, the whole ecosystem could shift in order to maintain or find an area where the temperatures they're adapted to are maintained.

DOERING: To what extent do you think that it might already be too late to prevent some of these changes that we're seeing?

BOWER: I think of the oceans as a giant flywheel of the Earth's climate system. And that flywheel is getting quite a bit of momentum now in a certain direction of warming, I don't believe there will ever be too late. This is an ongoing issue. We need to start now and maintain our efforts towards reducing carbon dioxide into the atmosphere. As long as we keep doing it, the climate will keep changing and moving. It's not going to reach a steady state. So the sooner we get started, the better off we'll be.