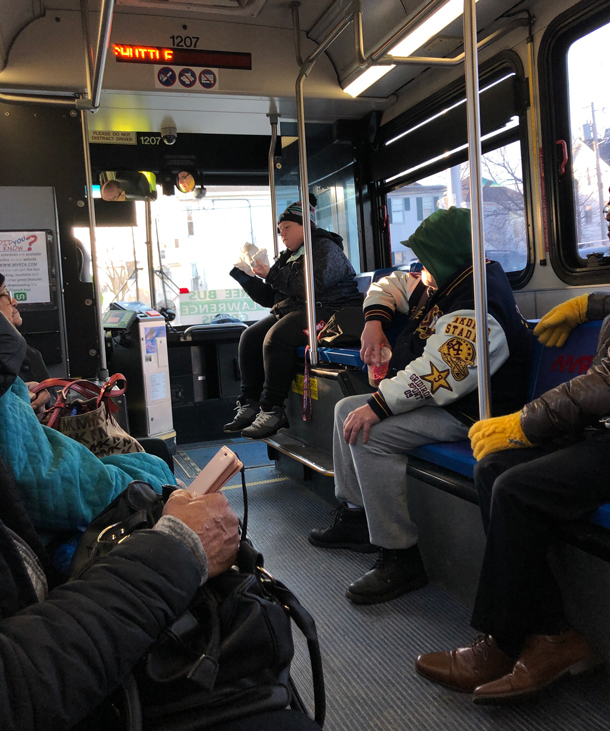 People aboard the 85 bus route in Lawrence on their way to doctor’s appointments, classes and groceries. (Photo: Bobby Bascomb, Living on Earth)

A growing trend to make public transportation free has come to Lawrence, Massachusetts, the first city in the state to provide free bus service through a pilot program. Living on Earth’s Paloma Beltran reports on the environmental and social benefits of making buses free in New England’s first minority-majority city.

CURWOOD: In first half of the twentieth Century, Lawrence, Massachusetts was one of the world’s largest producers of textiles, thanks to the waterpower of the Merrimack River and the hard labor of immigrant factory workers. Musical giant composer and conductor Leonard Bernstein was born in Lawrence to immigrant parents from the Ukraine, a few years after the famous Bread and Roses strike in 1912 helped to ignite the American labor movement. Today, Lawrence is still largely a community of immigrants, though more Spanish is heard there today than Ukrainian, and it’s still on the cutting edge of the quest for social justice. This time it’s a move to better the lives of all residents with a trial of free local public transit to lower polluting emissions and help the disadvantaged. Living on Earth’s Paloma Beltran has our report.

BELTRAN: The 85 bus pulls up in front of the Senior Center in Lawrence, Massachusetts.

[SOUNDS OF BUS PULLING UP]

BELTRAN: Two elderly women take seats next to the window, behind the bus driver.

BELTRAN: They are each carrying oversized purses and chat in rapid Spanish, catching up on their families, proudly talking about grandchildren.

BELTRAN: These ladies have been riding the bus like this for years but one thing recently changed for them - now it’s free. The City of Lawrence is offering free bus service for three bus lines for the next two years. And for a community where nearly a quarter of the residents live below the poverty line, that can make a big difference. A rider named Diane sits towards the front of the bus. Petite with blonde hair, Diane says she rides the bus about 3 days a week...

DIANE: To go to a soup kitchen. Or just to take me to close places that I need to go.

BELTRAN: And what do you think of the fact that it's free?

DIANE: Oh, it's awesome, real good. I sometimes don't even have the money to walk in the cold. So the free bus really helps out a lot. 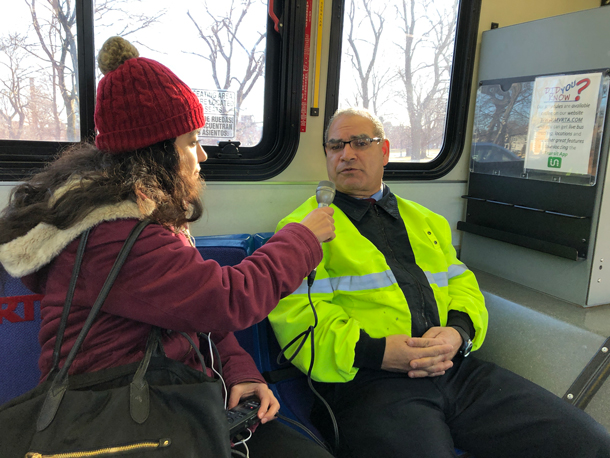 Reporter Paloma Beltran speaks with Luis who has been a bus driver with the Merrimack Valley Transit Authority for 26 years. He forms part of the Lawrence community and has seen new riders riding the bus after the free bus program began. (Photo: Bobby Bascomb, Living on Earth)

BELTRAN: Many Lawrence residents are recent immigrants like Vinicio. He moved here from the Dominican Republic 5 years ago. He likes the new-free fare program.

VINICIO: It’s very good for the poor because sometimes we don’t have the $1.25 for the bus. And this is very efficient. I hope that they keep this because the poor need help.

BELTRAN: A college student named Rosielis sits with a backpack full of textbooks. She is looking out the window, as the bus passes bodegas and the endless red brick buildings.

ROSIELIS: I take it daily because I have classes every day so I had to take from Monday to Friday, sometimes weekends when I had to do errands and stuff. And I had to save that like at least $25. So I will have enough money for it to come from school, and to school.

BELTRAN: Surveys show that most of the riders in the free bus program make less than 20,000 dollars a year. And since the program started, ridership has gone up about 20% percent.

RIVERA: I think that I get two reactions, one that people are happy. And two is when are we going to expand it?

RIVERA: You give people the ways to go make a good living, or go to school or go to the doctor's office or do all those things without worrying about having a car. With a very small infusion of funds you can give people a decent amount of relief in their wallet. 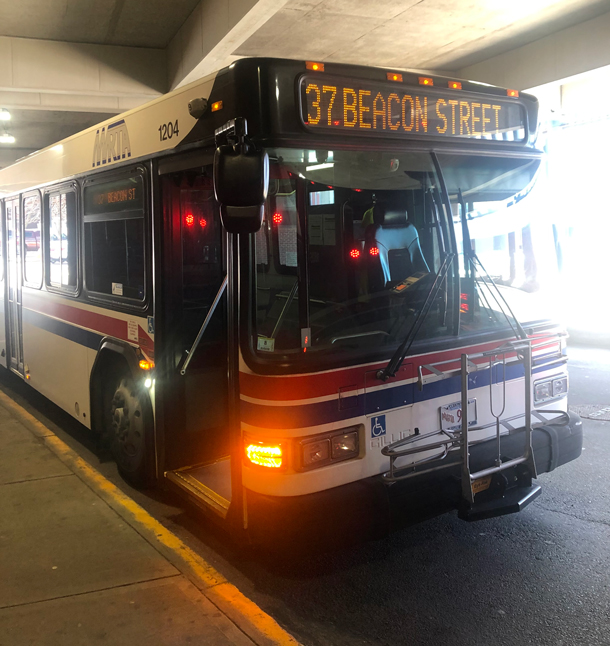 Route 37 forms part of the Lawrence free bus program and it passes by the Lawrence Technical School. (Photo: Paloma Beltran, Living on Earth)

BELTRAN: Indeed, only 5 percent of the operating cost for the bus in Lawrence actually comes from fares collected. So to launch this pilot project, Mayor Rivera asked the City Council to allocate $225,000 to make up the shortfall for offering the service for free. At this point Lawrence only offers free fares on three bus lines, those that stay within the city limits. But Lawrence is far from alone in this; free transit is a growing trend. Olympia, Washington recently joined Lawrence with a much larger free transit system throughout the city. And fifty miles south of Lawrence, in Boston, there are plans for a controversial new 1 billion dollar fare collection system. But Boston City Council member Michelle Wu says that free public transportation would be a better investment.

WU: The way to close gaps around the racial wealth divide around income inequality is to connect people where they need to go without financial barriers.

BELTRAN: A free bus program in a city like Boston would cost on the order of 100 million dollars according to Boston Mayor, Marty Walsh, a price he says the city simply can’t afford. But proponents including Michelle Wu say the cost would be closer to 30 million dollars and that money could be made up with a 2 to 3 cent increase in the gas tax. And she says free bus fare is a simple way to improve people's lives and help the environment.

WU: So free public transportation is really and in particular free bus service across various cities, is really about recognizing that we need to invest in the public good to match our big picture urgent challenges, as we struggle with climate vulnerability and traffic and an increasing housing crisis that is pushing people further and further away from job centers.

BELTRAN: Emissions from traffic are on the rise in Boston and it routinely has some of the worst urban congestion in the country, number one in traffic according to a recent study. And Boston sits at sea level, making it particularly vulnerable to the threats of climate change and sea level rise. Michelle Wu sees public transportation at the nexus of addressing those long-term concerns and improving public health more immediately. 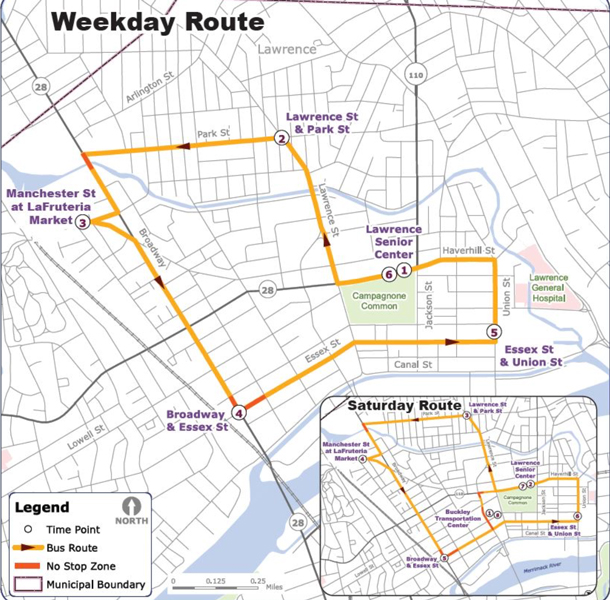 The 85 bus route forms part of the the Lawrence free bus program and passes by the Lawrence Senior Center allowing Seniors to gain more mobility through the city. (Photo: MVRTA)

WU: We are at a time in our city, state, country, planet's history that's really significant. And we're right at the edge of staring down a climate crisis. But even just in the moment today, the kids that we're sending out on the basketball courts are exponentially increasing their chances of living a healthier life, if we can help make sure that they're breathing in clean air.

BELTRAN: Back on the 85 bus in Lawrence. Two children walk to the very end of the bus. The older sister grabs her brother’s backpack as she guides him to sit next to her. They are very aware of the free bus and what a help it has been for their family.

CHILDREN: It shows that the bus is really useful. And it's kinda, it's kind of better to not pay because then it leaves us with extra money for the bills of our houses and the gas, laundry and all the money that we need for clothes and food.

BELTRAN: The little brother dangles his feet from the edge of the bus seat.

BELTRAN: Lawrence is a city of immigrants, new arrivals in this country. And the notion of offering free bus service is also a new concept here. But roughly 100 cities in Europe have been experimenting with free transportation for nearly a decade. All betting that a free ride will help both the poor and the environment.

For Living on Earth, I’m Paloma Beltran in Lawrence, Massachusetts.


Boston Globe | "‘Just Make It Free’: Lawrence Paid All the Fares for Three Bus Routes, and Ridership is Up"

The New York Times | "Should Public Transit Be Free? More Cities Say, Why Not?"

Huffpost | "Here’s What Happens When Public Transit is Free"