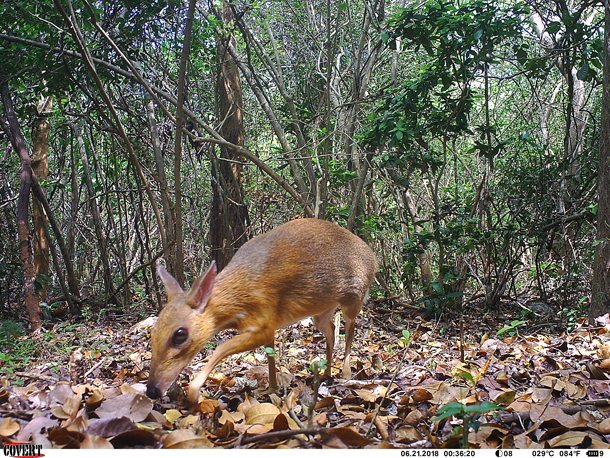 The forests of coastal Vietnam are among the most biodiverse on Earth, but in the face of rampant poaching, species are winking out. Recently conservationists got some good news as a species feared extinct, the Vietnamese fanged mouse-deer, was documented for the first time in more than 30 years. Andrew Tilker of Global Wildlife Conservation spoke with Living on Earth’s Aynsley O’Neill about how local knowledge helped locate the rare and tiny mouse-deer, also known as the Silver-backed Chevrotain.

CURWOOD: When a species hasn’t been seen for years, we start to worry it might be gone forever, just a ghost from a bountiful past. But in the forests of Vietnam, a team of scientists from Global Wildlife Conservation and its partners have caught just such a ghost on camera: The Vietnamese Fanged Mouse-deer. There have been no scientific records of this tiny creature in nearly 30 years, but now, camera traps have identified at least one population of the elusive creature, also known as the Silver-backed Chevrotain. The chevrotain is the first species found as part of Global Wildlife Conservation’s hunt for 25 "Most-wanted" species, which they think, may be lost. But the discovery of this particular species doesn’t necessarily mean that it is safe from extinction. Vietnam has a lot of biodiversity, but it also has huge conservation challenges, including a thriving bush meat trade. For more about the search for the chevrotain, Andrew Tilker, the Asian Species Officer for Global Wildlife Conservation spoke with Living on Earth’s Aynsley O’Neill.

O'NEILL: What does it mean for the silver-backed chevrotain to have been lost to science?

TILKER: So there had been no scientifically validated records, in this case for more than 25 years, and scientists were unsure whether or not it still existed in the wild in Vietnam. 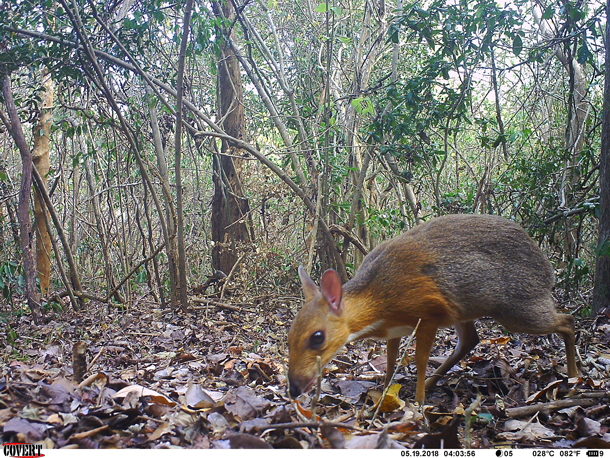 These animals are also known as mouse-deer. They are the world’s smallest ungulates, or hooved animals. (Photo: Courtesy of SIE / GWC / Leibniz-IZW / NCNP)

O'NEILL: Is there any way for us to know why the chevrotain was lost for so long?

TILKER: So the silverback sugarcane was first discovered in the early 1900s. And then after that the species went unrecorded, until 1990. It's only known from a small part of Vietnam. And so it's not very widespread. It really occurs in a sliver of habitat in a small part of a fairly small country.

O'NEILL: And so the first spotting was on these camera traps. And one of the reasons we had to talk about this story is that it is just too cute for words, in my opinion, but how did it feel to see this creature for the first time?

TILKER: It's a really cool animal. So it looks like a tiny deer. And when I say tiny, I mean the size of a rabbit. It looks like a small deer that somebody had dipped halfway into a bucket of silver paint and then pulled it out again. It's a really unique animal. There's nothing else like it. When we got the first photos from the camera traps, I mean, obviously I was overjoyed, as was the entire team. We felt confident that we had a good shot at getting photographs of the species because local people said they saw this animal that couldn't be anything else. But we didn't expect to get so many photos on our first try. So that was really something special. And again, just highlights the importance of I think working with local people and local ecological knowledge. 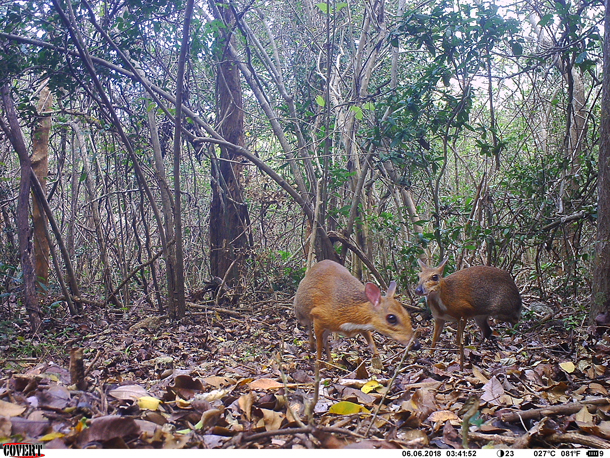 Researchers are still in the early stages of learning about this species, and males and females, young and old, are tough to tell apart. (Photo: Courtesy of SIE / GWC / Leibniz-IZW / NCNP)

O'NEILL: Did local people know about the chevrotain, and, are there any other similar species that they might see and think oh, that's a silverback chevrotain.

O'NEILL: Now, is there a threat that is unique to the show retain that might have led to its rarity? Or would you say that this is a larger issue of conservation in the world in Southeast Asia, in Vietnam specifically? 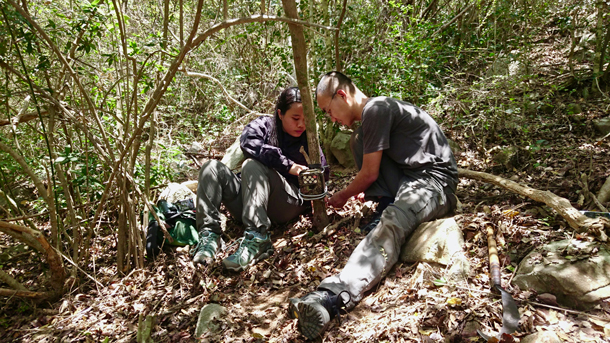 A pair of researchers set up camera traps in order to photograph the elusive chevrotain. (Photo: Courtesy of SIE / GWC / Leibniz-IZW / NCNP)

TILKER: We don't yet know if there are threats that are specific to the chevrotain. But the species is, without a doubt heavily threatened by rampant indiscriminate snaring because every mammal species in Vietnam is threatened by snaring. In Vietnam and in other parts of Southeast Asia, bushmeat is something of a status symbol. So if you're upper middle class and you want to show off to your friends, an easy way to do that is to go out and go to a bushmeat market and buy bushmeat rather than domestic meat. So it really is this I've heard people call it luxury meat kind of industry in Vietnam, that is fueling the snaring crisis that is catching chevrotain and many other species. We're very intentionally not releasing the name of that site or the location of that site, just to be sure that there is no chance that any poachers who want something different or novel would try to hunt animals from that population. We know that the species is threatened by poaching, there's no question about it. The question is, how severe is that threat? Is it pushing the species to extinction? Or do we still have a small window of time?

O'NEILL: What are the next steps? Where do we go from here?

TILKER: So the work is just beginning. The first step is securing the single known population. The second step, I think, is try to figure out where else the species occurs. If we lose these species from Vietnam, because they're only found in this country, then that equates to global extinction. We don't have backup populations as far as we know. That's it. 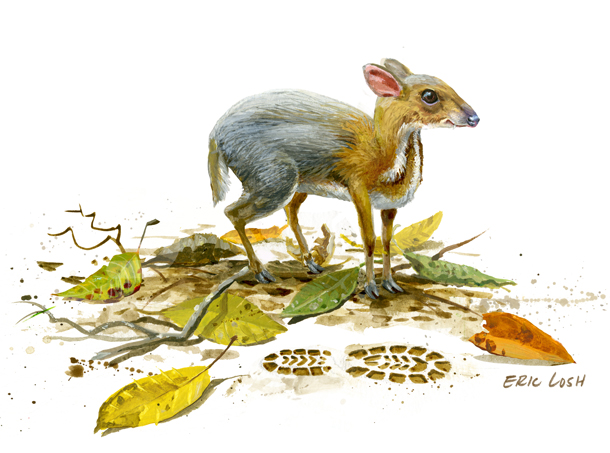 O'NEILL: What do you think is so important about telling the story of the silver-backed chevrotain?

TILKER: I think I like the fact that we're able to tell a very positive story about Vietnam, which has incredible biodiversity and is losing that biodiversity at an unsustainable rate. So the fact that we're able to tell a positive story, I think, gives much needed momentum for a positive outlook to conservation in Vietnam. And I've seen that in my interactions with local stakeholders, both from NGOs and also from the Vietnamese government. So it's it's nice to be part of a story that has such a positive direction because I think that's often needed when you're working in such a difficult field.


Read more about the search for the chevrotain

VIDEO: A Chevrotain prances in the nighttime forest of Vietnam

VIDEO: A Chevrotain forages, and looks out for danger, it’s tough to be a little guy!

VIDEO: Watch as a chevrotain searches the forest floor, what’s he, or she, looking for?