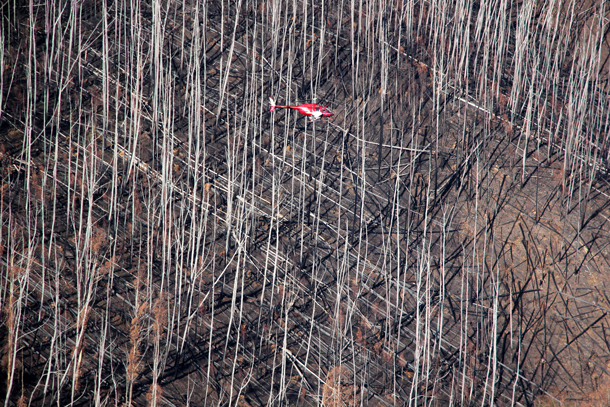 A helicopter sowing alpine and mountain ash seed into the ash of a recent bushfire. (Image: Owen Bassett [Forest Solutions])

After years of repeated bushfires, some of Australia’s eucalyptus forests can no longer come back on their own, so humans are giving them a helping hand by carefully collecting and distributing their seeds. Owen Bassett of Forest Solutions and Host Bobby Bascomb discuss how the re-seeding works, and the impacts of prolonged drought and climate change on Australian forests.

BASCOMB: The Australian fires have so far burned an area nearly the size of West Virginia. The bushfires have burned through dry habitats home to many of Australia’s most iconic species like koalas, kangaroos, and wallabies. They’ve even burned the more humid eucalyptus forests, home to the lyre bird, lead beater possum, and the great glider – an animal so adorable it’s been nicknamed a flying teddy bear. Some of these humid forests aren’t naturally equipped to deal with frequent fires and are struggling to grow back on their own. But humans are helping give them a shot at recovery. Owen Bassett is Director of Forest Solutions which is helping the government re-seed forests in Victoria and New South Wales. He joins us from Melbourne, Victoria. Owen, welcome to Living on Earth!

BASSETT: Thank you for having me. It's a pleasure.

BASCOMB: So please describe the forests where you work. What do they look like and what does it feel like to be there?

BASSETT: Yeah, the forests that I work in are tall mountain forests, they're known as ash forest. I suppose in terms of stature they're similar to your California redwoods. So they're very tall, very large trees and sort of a wet forest. So you might think that a lot of Australia is covered in dry forest; most of it is of course, and most of it is arid, but along the southeast corner, we have beautiful wet forests that run up the Great Dividing Range and they are gorgeous to be in. They're cool, they're damp, full of great native wildlife. Yeah, just beautiful to be in and visit, yeah.

BASCOMB: Wow, it sounds, sounds amazing. What kinds of animals live in the forest there?

BASSETT: So yeah, we have all of those marsupials that you American people know about, the jumping ones and the kangaroos; we have a species, or a number of species of wallaby that live in those forests. And we also have arboreals, so these are mammals that live up in the canopy of the forest. And then we have this magnificent songster, I don't know if you've heard of the superb lyrebird. It has the capacity to mimic a whole range of birds and sounds that it hears in the forest. And it's an absolute joy to listen to them. So these forests are sort of like a cathedral to be in. And so sounds like the lyrebird just, they just resonate. 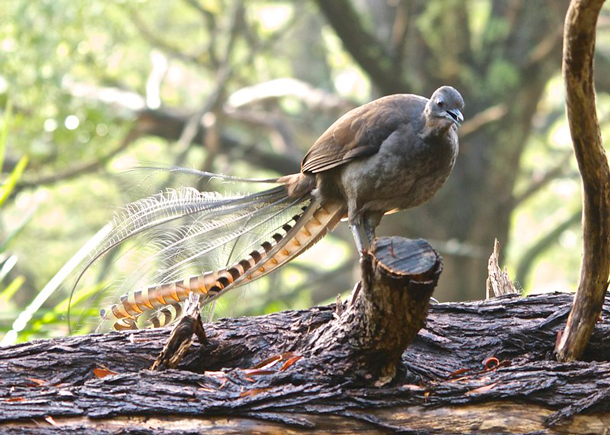 Male superb lyrebird. Lyrebirds can be found in mountain and alpine ash forests and are so skilled at imitating sounds that they can mimic the sounds of chainsaws, camera shutters, and even laughter. (Photo: Brian Ralphs, Flickr CC BY 2.0)

BASCOMB: I think we actually have some recordings of the lyrebird we can play here. Let's have a listen.

BASSETT: They do have the ability to imitate the shutter sound of cameras. 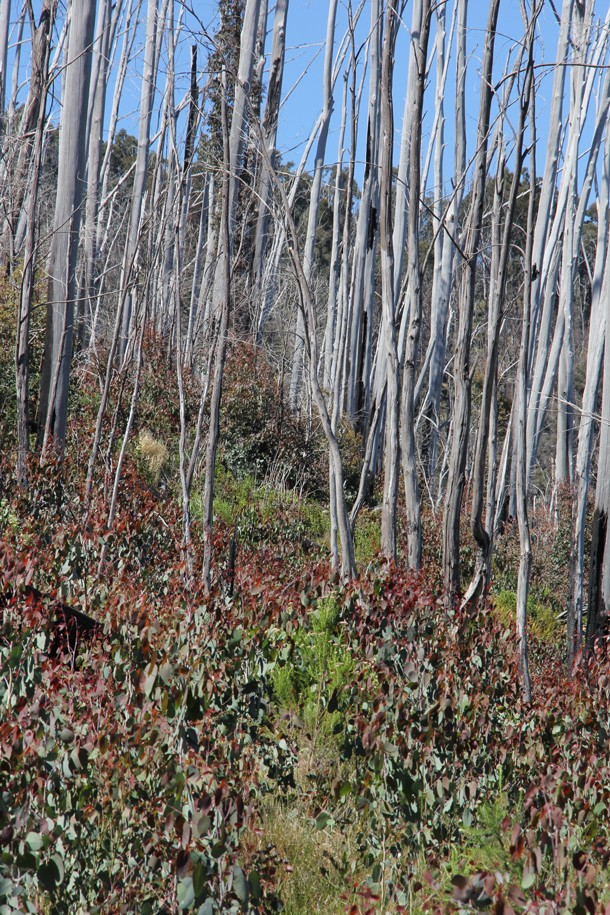 BASSETT: They can imitate the sounds of chainsaws. . .

BASSETT:. . . dogs barking, all sorts of things like that. But the main repertoire is, is the full suite of other birds that are, and animal sounds that are in the forest.

BASCOMB: So you mention that this is a very wet forest. Why is it burning now, and how common is that?

BASSETT: Yeah, look, it's unfortunately very common at the moment, but it's not common in terms of the forests', I suppose, geological history, if you like. All eucalypts have evolved with fire, so fire is part of the environment here in Australia, a little bit like your California. But the thing is that, you know, we do have a changing climate here at the moment, a drying climate. And we're currently caught in this real cycle of droughts, okay, so, in southeast Australia, we had this mammoth drought. We refer to it as the Millennial Drought. It went for 12 years, from 1997 to 2009. So what that left was this huge legacy of soil moisture deficit. And then we've had a sequence of small droughts since that time. And we're currently in one at the moment. And the problem with the Millennial Drought and the legacy it's left is that every other small drought that comes along has this sort of disproportionate impact. And this year, we've, we have never measured drought index so high. That is why these forests are burning. And in the last 20 years, these forests have burned on average every four years. And because those fires are so, or that interval is so short, the species just can't catch up. The species needs at least 20 years to be able to then reproduce, because young trees don't flower. And so these four year intervals are just too quick and where you get these fires overlapping, then the species is in big trouble. And we're experiencing that now in Australia, is forests that are at the stage of population collapse. Classically, it occurs in species like alpine ash and mountain ash that, you know, require much longer periods of fire intervals to survive. 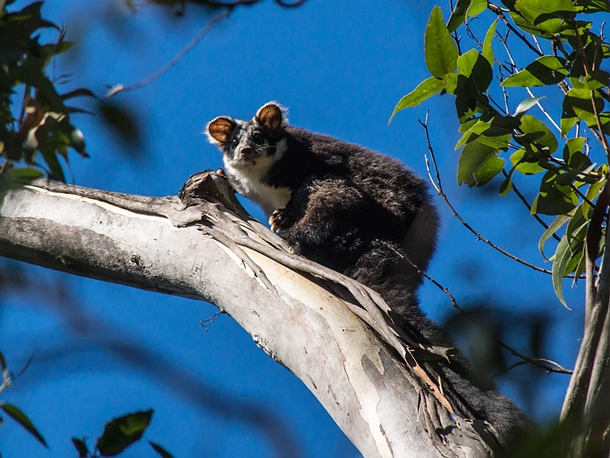 BASCOMB: So it sounds like if there was no intervention, these forests would likely turn into some different type of ecosystem altogether, maybe savanna or grassland or something like that. But you and your group, you're intervening, and can you talk about that? What are you guys doing exactly?

BASSETT: Yeah, look so, because these species are obligate seeders, if we have enough seed, and we have the means to spread that seed where the forest is going to experience population collapse, then we can intervene, lay seed on the ground or sow seed on the ground, and these forests will return. But it's easier said than done. So we have to collect the seed, we have to distribute the seed, and that's a mammoth operation, yeah. 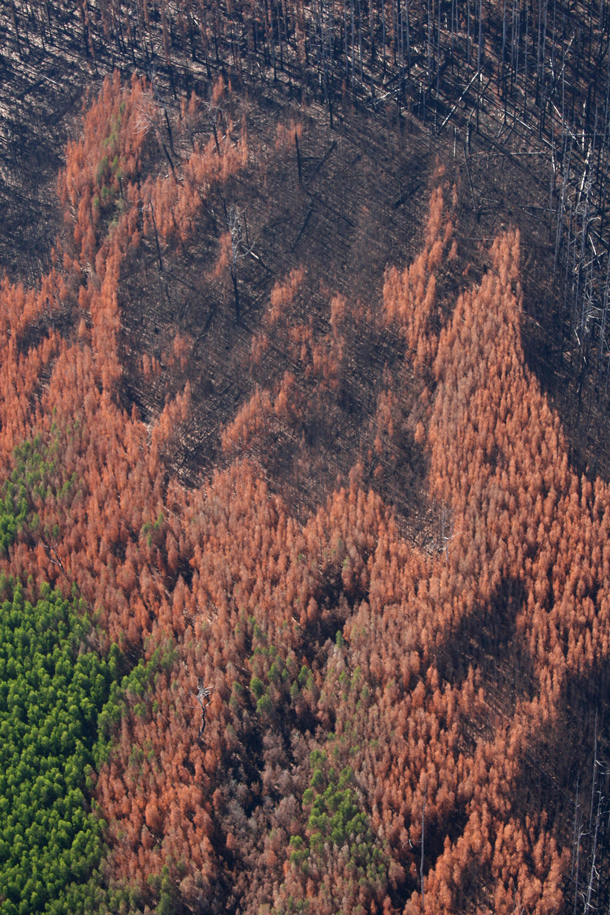 An aerial view of an ash forest burned when still too young to produce seed shows no self-recovery. (Image: Owen Bassett [Forest Solutions])

BASCOMB: Mmm. And how does that work? How do you collect them?

BASSETT: So for the last 26 years, I've been monitoring the flowering of these species. So mountain ash, for example, is the tallest flowering plant in the world. And every year I go up in a light aircraft, and I actually map the distribution of the flowering. So once it's flowered and we know where it is in the landscape, one year later, we can expect that there will be seed there. And so at that point, we send climb teams in and they climb these tall 80-meter trees. And they de-limb, just a, we keep the tree alive. We just delimb maybe a third of the branches that are on that tree and we keep the tree healthy, we keep the growing tip in place. And so we take just a section of that crown out and from that, we can pick the seed pods, if you like. They're sent away and the seeds extracted from that fruit or those pods. The seed looks a little bit like coarse pepper, so tiny seeds, the seeds are not, not big and it's extraordinary to think that such a tall tree, something akin to your California redwoods, comes from this tiny, tiny piece of cracked pepper size seed, yeah. 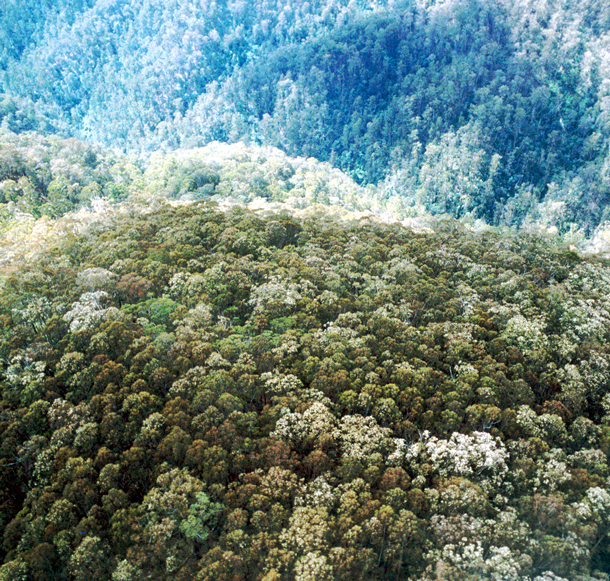 BASCOMB: Nature is amazing that way, huh? And so how many pounds of seed or maybe kilos of seed are you getting? And then, and then how do you distribute them? 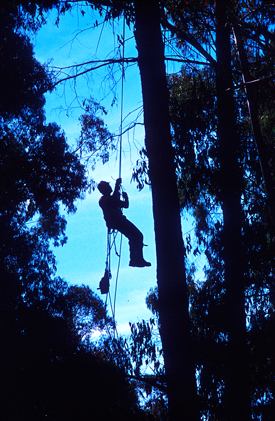 BASCOMB: And so how long have you been doing this type of regeneration with helicopters, you know, distributing the seed in this way?

BASSETT: Yeah, since we started that, I mentioned earlier that we've had fires on average frequency every four years. So since 2003, we've been having to, to sow, aerially sow, seed across large areas to recover forests that are in danger of imminent population collapse. Just last year, we had to do this operation. From all those earlier fires, we have all this young regrowth. So that's burned again, all that young real growth has burned again. So we're even asking the question, you know, you know, should we keep sowing seed, you know? What's, because, we're re-sowing sites now that burned like four or five years ago. And we've always struggled with having enough seed and this year, that's probably a major challenge, is insufficient seed to sow this huge area that we're expecting to have to sow.

BASCOMB: Yeah, I understand that you also have a seed bank that you're working on. Can you tell me about that?

BASSETT: Yeah. So the concept of a seed bank is one that, you know, you put some seed away for a rainy day. We needed 10 tonnes of seed this year. At the moment, we might have a third, maybe to a half of that. Now I've been advocating for a seed bank for about 10 years, and the state government has only ever funded small seed collection operations that were emergency in nature, if you like. "Okay, we've got a bushfire, we'd better go and get some seed." 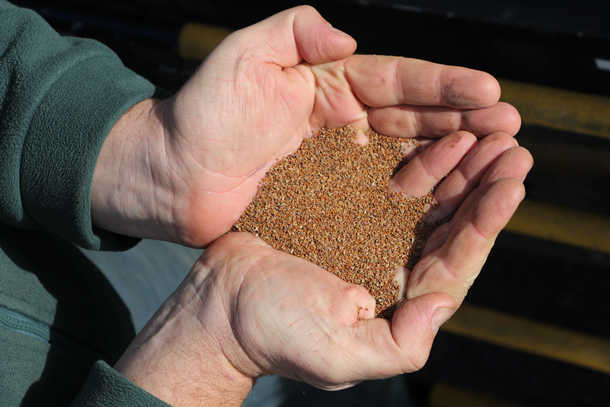 BASCOMB: Hmm, it's gotta be very frustrating for you.

BASCOMB: Owen Bassett is the Founder and Director of Forest Solutions in Melbourne, Australia. Owen, thank you so much for all of your hard work and for taking the time to talk with me.

BASSETT: Oh, thank you for having me. It's a pleasure, yeah. 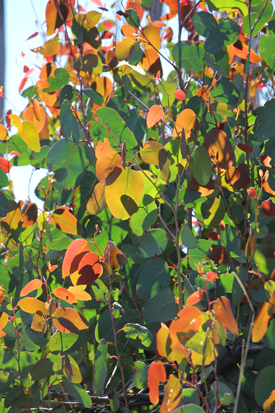 BASCOMB: Coming up – Unlucky in love this Valentine’s Day? Try feeding your ex to a bear. Well, kind of…. That’s just ahead on Living on Earth.

ANNOUNCER: Funding for Living on Earth comes from you, our listeners, and United Technologies, combining passion for science with engineering to create solutions designed for sustainability in aerospace, building industries, and food refrigeration. UTC companies such as Otis, Carrier, Pratt and Whitney, and UTC Aerospace systems are helping to move the world forward. You can learn more about United Technologies by tuning into the Race to Nine Billion podcast; listen at racetoninebillion.com.

About Owen Bassett and Forest Solutions

WATCH: BBC’s “Lyrebird sings like a chainsaw” with David Attenborough