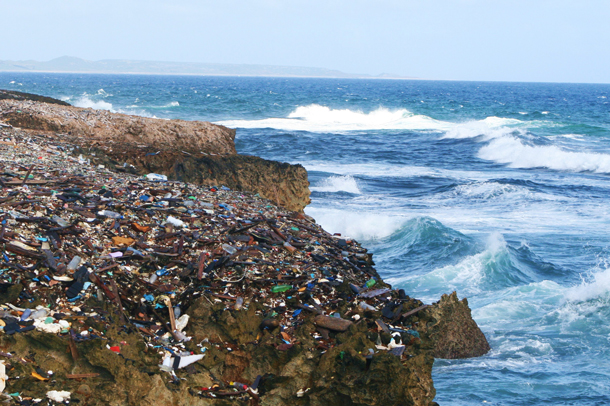 Every year, approximately 300 million tons of plastic is produced around the world. Very little of it is recycled, leaving a large majority to end up as plastic pollution in nature. (Photo: Bastian, Flickr, CC BY-NC-ND 2.0)

Around 300 million tons of plastic is produced annually, and only a tiny fraction of that plastic is recycled. Since most plastic will take about 400 years to decompose, plastic pollution poses a huge threat to the environment. But, as Living on Earth's Don Lyman explains, the discovery of a mushroom species that feeds on polyurethane might change all that.

Just ahead, as coal mines in the US and the UK shutdown former coal communities on either side of the Atlantic look to each other for support. But first this note on emerging science from Don Lyman.

LYMAN: Worldwide approximately 300 million tons of plastic is produced annually, but only a tiny percent of that plastic is recycled. Now researchers have discovered something unexpected that might help deal with discarded plastic - mushrooms. Researchers from Yale University discovered a species of mushroom Pestalotiopsis microspora in the Amazon rainforest that is able to feed on polyurethane a key ingredient in many plastics. Scientists estimate that most plastic will take about 400 years to decompose on its own. But in controlled experiments, mushrooms were able to break down plastic in just a few months, safely converting it into organic matter or compost. Another study by a researcher at Utrecht University in the Netherlands found several other species of mushrooms that can consume plastic, including common edible species, like the oyster mushroom. If the mushrooms are proven safe to eat after they've broken down the plastic, they may have the additional benefit of providing a food source for people. The initial results are promising but the question of scale remains. The mushrooms in the experiments took several months to degrade a relatively small amount of plastic. Can plastic eating mushrooms keep up with global plastic production? And is there a way to process bigger batches of plastic? Researchers are working on addressing these issues as they continue to experiment with an interesting new way of recycling plastic waste. That's this week's note on emerging science. I'm Don Lyman.


Smithsonian Magazine | “Chow Down on a Plastic-Eating Fungus”