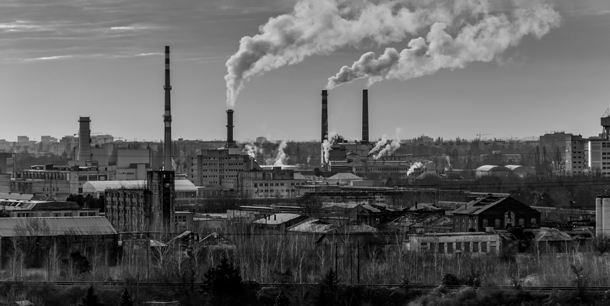 Industrial pollution in Bratislava, Slovakia. Smokestacks from coal-fired power plants and factories are a major source of PM 2.5 air pollution in middle- and low-income countries. (Photo: Dominik Dancs on Unsplash)

Ultra-fine particulate air pollution known as PM 2.5 is so small that it can work its way through the lungs into the bloodstream, and from there into major organs including the heart, brain, and kidneys. A new study published in the Journal of the American Medical Association, JAMA, finds a link between PM 2.5 air pollution at levels considered safe by the EPA and the deaths of 200,000 veterans over a recent decade. Earlier research linked PM2.5 with many disorders, including heart attacks and strokes, and this latest study adds three previously uncorrelated specific causes of death: dementia, kidney disease, and hypertension. Ziyad Al-Aly is a nephrologist and epidemiologist at Washington University School of Medicine in St. Louis and a coauthor of the study and joins Host Steve Curwood to discuss the findings.

There’s more evidence that supposedly safe levels of air pollution can actually be deadly. According to a study recently published in a Journal of the American Medical Association 200,000 deaths of military veterans were linked to long term exposure to ultra fine particle pollution below EPA acceptable limits. Epidemiologists compared the records of 4.5 million veterans who died over a recent decade to levels of ultra fine particulates where they lived. These pollutants are called PM 2.5 for their size, which is two and half microns or about 30 times smaller than the width of a human hair, and almost all of us breathe them in every day, mostly thanks to the burning of coal and the tailpipes of millions of motor vehicles. Earlier studies have linked PM 2.5 pollution with a wide variety of maladies ranging from heart attacks and strokes to asthma and dementia. But now this research conducted at Washington University in Missouri has found associations with a total of nine disorders, including hypertension and kidney disease. Dr. Ziyad Al-Aly is a coauthor of the study and joins me now from St. Louis. Welcome to Living on Earth!

AL-ALY: Thank you very much for having me.

CURWOOD: So talk to me about what you found about the relationship between these fine particles found in pollution with disease and mortality.

CURWOOD: What was your resource for this study? How were you able to determine this?

AL-ALY: So we built a cohort of about 4.5 million participants from using a database at the VA, and then characterize the relationship between exposure to PM 2.5, and risk of death, all cause mortality, and ran risk of cause specific mortality, causes of death in core participants, and this is how we were able to, you know, figure out the causes of death associated with the PM 2.5 exposure. 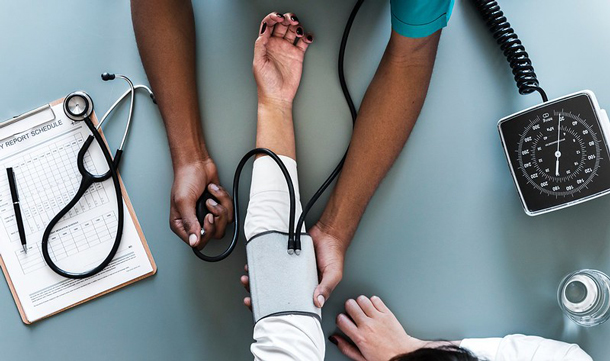 CURWOOD: What's the level of exposure to fine particulates that we're talking about here? What are the numbers and what exactly is measured in that number?

AL-ALY: The numbers really vary. There are some people in the United States who are exposed to PM 2.5 of about five, and some about six and seven and eight, nine and 10 and 12 micrograms per meter cubed. So that's sort of a, it's a quantitative measure of evaluating the concentration of those particles in a volume of air.

AL-ALY: And obviously, the higher the worse, and the threshold that was set by the EPA is 12. So levels below 12 micrograms per meter cube now is considered from a regulatory perspective, considered safe.

CURWOOD: What does the World Health Organization say?

AL-ALY: The World Health Organization sets the level at 10 micrograms per meter cubed.

CURWOOD: So what's the mechanism of how these fine particulates cause illness and death?

AL-ALY: So when we breathe PM 2.5, it goes to our lungs, but because it is also so small, it permeates through the lung tissue into the bloodstream. And once it's in the blood, it circulates in the blood and then goes to other organs including the kidneys, the brain, the heart, the liver, the pancreas, where it may then affect them adversely.

CURWOOD: What parts of the country did you find a lot more mortality associated with PM 2.5, if there was any place?

AL-ALY: So it's really, the burden is not evenly distributed. You know, parts of the Midwest and parts of the South are more disproportionately affected. 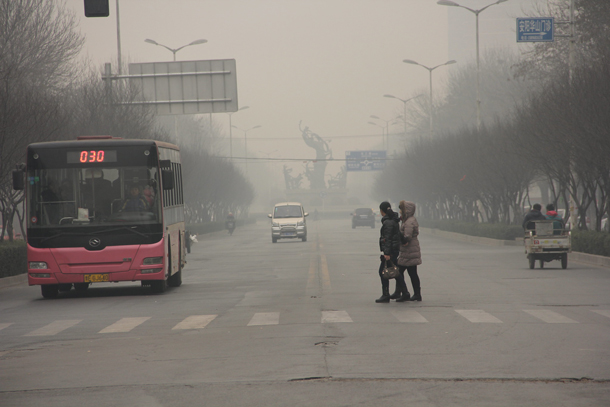 CURWOOD: So it's interesting that one finding of your study is that even when exposed to comparably the same amount of fine particulate air pollution, that black patients, black veterans were more likely to die from this type of pollution than white patients. What do you think is going on there?

AL-ALY: Correct. This is really what was eye-opening, for the same exact level of PM 2.5, let's say for PM 2.5 equals 10 micrograms per meter cubed, for the same exact level of PM 2.5, black patients, black veterans exhibited higher risk. And when we adjusted or controlled or held constant, you know, socioeconomic deprivation, you know, still race, you know, exhibited what we call that statistically an interaction. What that really means that black people in our cohort were more vulnerable for the same level of PM 2.5 than white people, irrespective of their socioeconomic background. That could mean a lot of things. One of the potential explanations for this is that perhaps minorities may have less access to resources or health care or preventive measures, or a means to mitigate, you know, the adverse consequences of exposure to pollution. And as a result, they become more sensitive to it or more vulnerable to levels of PM 2.5. And geographically, black people tend to also to live in an area where there is high pollution. So not only do they live in areas that have a higher level of PM 2.5, or higher levels of pollution, but they're also more sensitive to it, or more vulnerable to it. And that's really almost like the odds are stacked significantly against racial minorities. And that's sort of a piece of environmental injustice.

CURWOOD: Now what are the major sources of fine particulates, PM 2.5, now in the US?

AL-ALY: So in the US it's primary land traffic, it's really cars on the roads. In other parts of the world, industrial emissions, including power plants that are burning coal, are really number one. And there are places in Southeast Asia and also in India, where biomass burning, when farmers would actually burn the remnants of their fields to try to get rid of the agricultural byproduct of producing rice and other things, and that also produces a huge amount of PM 2.5. But in the United States, the primary source of PM 2.5 island traffic, meaning cars on the road. 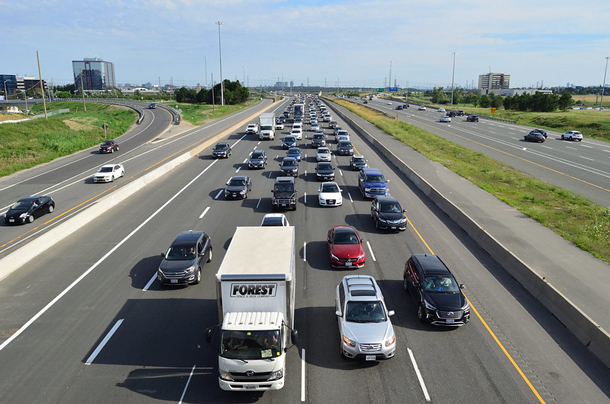 CURWOOD: Now what about wildfires, to what extent do wildfires raise fine particulate levels as well?

AL-ALY: They do contribute to it, but wildfires tend to be in the United States only regional and primarily on the west coast. They're not really distributed throughout the nation, and also really seasonal in the sense that they, you know, happen only for like about a month per year. And then they produce spikes in PM 2.5, and that generally affects the yearly average, but not really, not really very dramatically. But they're certainly a source of PM 2.5 exposure that need to be considered in the discussion.

CURWOOD: One of the things that's startling about your research is that these deaths are linked to folks breathing air that the Environmental Protection Agency says is supposed to be safe.

AL-ALY: So yes, I mean, you can read this both ways. So when one of the ways that you could read this is that most of the deaths that we found are actually below the EPA recommended level of 12. So one way to read this is really enormous success of the EPA and the Clean Air Act in reducing PM 2.5 in the United States, and that, you know, most of the PM 2.5 in the US now is below 12, so most of the health consequences that you see are below 12. So our other reading of this is that oh, you know, like most of the deaths now are below 12. So maybe we should think about how do we, or what's the right threshold for us to try to, at the same time not really curb economic productivity or curb progress, you know, encourage progress, but while at the same time also reducing, you know, the health burden or the health consequences or mitigating those to the extent possible.

CURWOOD: So, air pollution, of course, is hard to avoid, but to what extent is there anything that people can do to protect themselves? Let's start with here in the US.

AL-ALY: Well, when it comes to the individual level, it's really hard to sort of advise people on wearing masks; maybe when there is like wildfires like in Northern California and you know, about a month ago or so, and maybe wearing masks and trying to stay in door when the fire is raging, as a lot of you know, smoke outside, or a lot of PM 2.5 in the air. But short of that for like the average daily, you know, life of a person living in a major city or living in the suburbs or living in rural areas in the United States. I think there's not a whole lot a person can do other than really participate in the discussion. As, how do we as a society, try to, you know, work together to, you know, come up with ways of while at the same time encouraging economic productivity, curbing air pollution, to the extent possible to reduce the health impact of air pollution.

CURWOOD: Dr. Ziyad Al-Aly of Washington University School of Medicine, thank you so much for taking your time with us today.

AL-ALY: Thanks a lot.

CURWOOD: And by the way, when there is a strong rainstorm it can briefly wash fine particulates out of the air, so if you notice a clean fresh smell after a rain storm you may in fact be breathing cleaner air.

Read the journal article in JAMA, the Journal of the American Medical Association