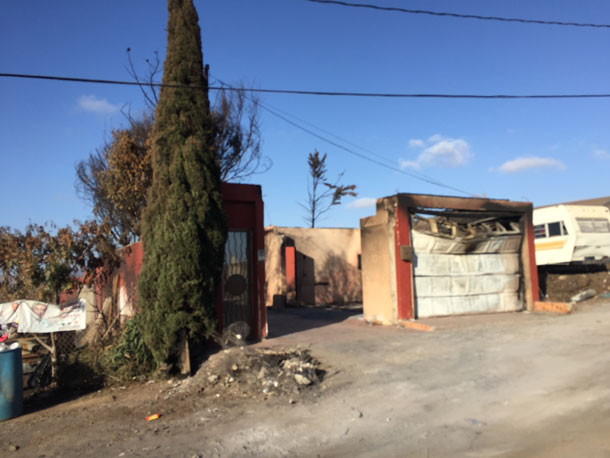 The extreme heat and winds that fueled wildfires in the State of California this October also fed fires in Mexico’s Baja California. KPBS reporter Max Rivlin-Nadler reports on the recovery efforts already underway, and tells Living on Earth’s Paloma Beltran about how limited resources made fighting these fires especially difficult.

California has been especially hard hit by wildfires this year, on both sides of the border with Mexico. The recent spate of fires in the State of California burned thousands of acres of land and left millions without power. And south of the border in Baja California, fast moving fires recently had firefighters struggling to get control. At least 3 people died in the outbreak. KPBS reporter Max Rivlin-Nadler has the story.

RIVLIN-NADLER: Aracely Brown is the mayor of Rosarito once a resort beach town that has in the past 20 years exploded into a city of over 70,000 people. We're driving up to Colonia Morelos, a neighborhood that's perched on a hill overlooking the city. On Friday night, Brown had raced to the neighborhood to help residents escape a fast moving wildfire that had swept through a nearby valley, fueled by Santa Ana winds.

BROWN: No, never before in the history of Baja California have there been fires like this. Never.

RIVLIN-NADLER: Brown says the fires destroyed more than 60 houses in Rosarito and at least three people died. Brown says that following strong rains over the winter, there was far more vegetation in the valleys that was able to burn.

BROWN: [La lumber brincaba] The fire leapt in. Other times the fire ran no more, but this time the fire jumped and it fell on the roof of the houses and burned down the houses quickly.

RIVLIN-NADLER: The communities hardest hit by the fires last weekend were the ones highest up in the hills where the residents were least eager to leave their properties. Many residents don't have official paperwork to show that their homes belonged to them and were worried that if they left they wouldn't be allowed to return. Up in Morelos, the city has set up a station where people whose houses have burned down can register for assistance, get a medical checkup and get replacement documents like birth certificates that might have been destroyed in the fire. Brown's administration is handing out large tents for people to stay in on their properties while they rebuild. Eusebia Supulveda-Vega lived in her home with seven other family members. She's lived there for 17 years. Their entire house burned down.

SUPULVEDA-VEGA: There have been fires, but they never came here.

RIVLIN-NADLER: Her family only had a few minutes to escape the flames. They didn't have time to take anything with them, so all of their possessions were destroyed. But they aren't wasting any time rebuilding their home. Volunteers have offered food, their labor, and even an oven as they try to recreate what they've lost. Eusebia says she knows that with more winds in the forecast and extremely dry conditions, that they're still at risk. She says they only plan to rebuild just this once. 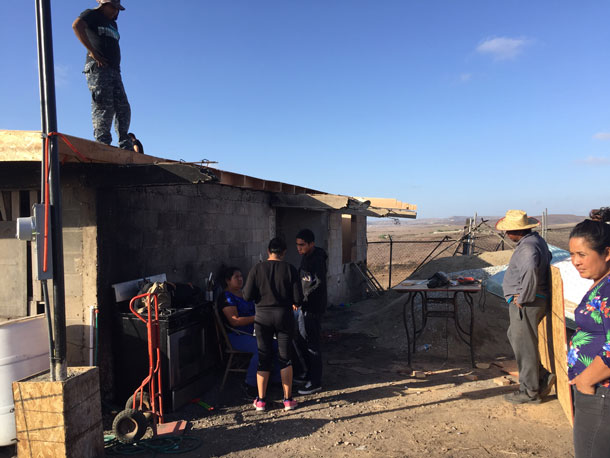 SUPULVEDA-VEGA: No, no, nothing more. Only one time.

RIVLIN-NADLER: Seasonal fires have long been a part of the ecosystem in Baja California. This isn't the first time that the area around Morelos has burned. In fact, before the neighborhood was called Morelos, it was known as “los quemados” or “the burned”. The previous settlement there was destroyed by a wildfire decades ago. Omar Ortiz is the head of the firefighters in Rosarito. It was up to his small department of under one hundred firefighters, both full time and volunteer, to put out rapidly advancing flames in Morelos, which has no running water.

ORTIZ: The topography is very complicated. The mountains are very steep. It's very difficult for the equipment to get there. It's tough to bring the water up from below and then it gets muddy and it's even harder to get the trucks pass.

RIVLIN-NADLER: Ortiz says the risk of fire has only increased as people have moved up into the mountains trying to find cheaper places to live in the prospering city.

RIVLIN-NADLER: The rebuilding of Morelos has begun. Local businesses have donated their workers and resources and students have begun clearing out toxic ash from hollowed out houses with cities expanding their footprints further into areas that have a long history of seasonal burning. The question for these neighborhoods is not if the next fire will hit, but when, and if they'll be ready or able to get out of the danger in time.

CURWOOD: For more details about the fires in Baja, KPBS reporter Max Rivlin-Nadler spoke with Living on Earth’s Paloma Beltran, who grew up in Rosarito.

BELTRAN: Could you please describe the scene in Rosarito?

RIVLIN-NADLER: So Rosarito is a town in between Tijuana, which is this massive metropolis, and Ensenada, which is a much more established city. Rosarito has been growing for the past two decades, it's doubled in size. And as it's doubled in size, what's happened is people have moved away from the city center and up more into the hills, into places that weren't really seeing a lot of development before. It was a lot of, you know, it was forest, it was coastal forest, and then it became farming. And now it's becoming residential, you'll see these huge residential complexes stretching off into the horizon, where before there was nothing. So that's really fueling the growth, is kind of this internal growth. And then of course, you have the "gringos", you've got the Americans coming down. This is something, you know, we see playing out in California as well, where if you have an affordability crisis, people tend to move to where things are cheaper, a little bit more off the grid. And unfortunately in California, that means you're running a much higher fire risk. And that's what we've seen in Baja over the past two weeks, just as California has had to deal with really, really dry conditions and very strong winds, the same has been happening in Rosarito and Baja in general and that led to a series of fires.

BELTRAN: Yeah, I grew up in Baja California, and I remember the Santa Ana winds. They are definitely strong in Rosarito. But I have honestly never seen fires this big. Why are they so out of control this year?

RIVLIN-NADLER: One of the reasons why they're much bigger this year is because of a very wet winter for this area. There was a lot of fuel to burn and a lot of wind to help that burn and keep moving. But also, because Baja just hadn't burned in a really long time. There haven't been large forest fires. So you're seeing a lot of things that have been built up over a series of years get ready to ignite. On top of that, you do have kind of smaller fire departments that are less equipped to deal with multiple fires at once. They are stretched very thin for places that are growing very quickly and that don't have as large of a tax base as California does, just through people not paying taxes or much more informal styles of housing. So you have these fire departments that have maybe less than 100 people in the case of Rosarito, that's including volunteers, who are fighting very active fires that are fast moving and that are tough. And on top of that, a lot of these areas do not have running water to begin with. So one thing that we require in California, for example, is you have to have some, some access to potable water. A lot of these communities that were in harm's way in Baja did not have access to running water and had not been set up to the grid. So any water that was needed to fight these fires had to be trucked up. 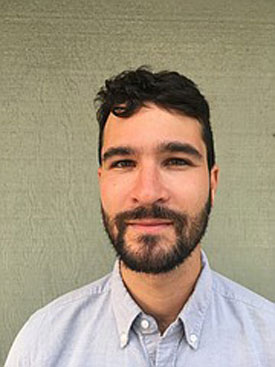 BELTRAN: I know California residents are accustomed to fires breaking out each year, but this definitely came out as a surprise to people in Rosarito. How are Rosaritenses dealing with this, for instance, in evacuation and the unprecedented loss of their homes?

RIVLIN-NADLER: Right. So one thing that we found and, you know, mentioned in the story is that people are really wary of leaving their homes, especially in kind of these more informal neighborhoods where people don't necessarily have legal documentation that says this home is theirs. You know, they've been living here for 20 years, it's intergenerational; nobody with them present would challenge that. That being said, much like California, Baja California is experiencing an incredible land rush where real estate prices are skyrocketing, foreign investment is way up. A lot of people are interested in getting into Baja land ownership. So a lot of these people are really, really wary of leaving high risk areas just because their families lived there forever. So even in the case of where a family had their home entirely burned down, they weren't going to leave and that's where the government kind of met them halfway and said okay, if you're not going to leave, we're not going to make you leave. One thing we are going to do is we're going to give you a very large, you know, eight person tent and you could live in that house, the remains of the house, until you can rebuild. And the rebuilding started almost immediately. You know, in the US, we have a system where people look for insurance payments, these things take years, whereas in Mexico, there is no insurance for these homes. A lot of the people living there have not paid taxes which would qualify them for some semblance of insurance in the Mexican system. So what you end up with is people wary of vacating their homes, setting up their own campsites, literally where their homes used to be and then reconstructing them, essentially on the ash of their old home.

Al Jazeera | “The ‘Crisis’ Driving Some Americans to Move to Mexico”

The Atlantic | “California Is Becoming Unlivable”