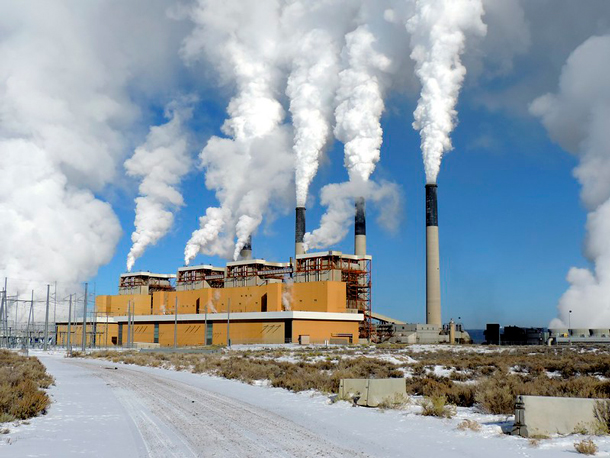 In this week’s trip Beyond the Headlines, Peter Dykstra and host Steve Curwood discuss the decline of coal, as a major Western utility pivots to renewables and Murray Energy faces potential bankruptcy. Also, recent reports paint a picture of science in crisis under the Trump Administration. And in the history calendar, it’s been ten years since an island government held a cabinet meeting under water to draw attention to the vulnerability of low-lying nations to climate change.

CURWOOD: It's time now to take a look beyond the headlines with Peter Dykstra. Peter's an editor with Environmental Health News, that's ehn.org and DailyClimate.org. He's joining us now from Atlanta, Georgia, where -- Peter, I hope it's warmer than it is up here in New England where it's getting kind of cold.

DYKSTRA: Oh, it's gettin' to be fall down here too, although you guys find fall and winter a lot quicker than we do.

CURWOOD: [LAUGHS] Indeed. Hey, what do you have for us this week?

DYKSTRA: We got some coal news from the Pacific Northwest and Northern Rockies. One of the biggest utilities out that way is PacifiCorp. It's got primarily coal plants in six states: Northern California, Oregon, Washington, Idaho, Wyoming, and Utah. They power cities like Salt Lake City, and they are, for the most part, announcing that they're getting out of the coal business and investing in renewables, wind and solar. And the reasons for their doing that have nothing to do with climate change.

CURWOOD: Oh? What do they say?

CURWOOD: Oh, okay, so coal is definitely on its way out if a company like this is getting out of the business.

DYKSTRA: That's right. And there's one more bit of coal news from Ohio, where Murray Energy is headquartered. That, of course, is the company led by the very colorful coal baron Bob Murray. They're looking at a potential bankruptcy. Murray says they've missed payments to some of their largest creditors. Bankruptcy could be an option before the end of this month. It's the biggest privately held coal company in the country. And of course, Bob Murray has been the most outspoken against government regulation of the coal industry. He also used to employ a lobbyist named Andrew Wheeler, who's now the head of the EPA.

CURWOOD: This is an interesting trend, isn't it, Peter. Hey, what else do you have for us?

DYKSTRA: A couple of new reports that paint a picture of science in crisis under the Trump administration. There's a peer reviewed report in the journal Environmental Research Communications that talks about how even while acceptance of climate science has grown among the American public, it's actually shrunken somewhat among American policymakers.

CURWOOD: Oh, so wait a second, as the public gets smarter about climate science, policymakers are getting, well, can we say less smart?

DYKSTRA: Who'd a thunk it, Steve, and that's apparently what's happening. There's another report out from the Brennan Center for Justice that says that federal science has reached a crisis point, exactly because of the same polarization. They give a few examples; this is a bipartisan panel that studied this that included the former EPA Administrator Christine Whitman, former Republican Senator Chuck Hagel. They point to examples like how advisory boards are stocked with scientists from industry these days, rather than more independent scientists; how the Interior Department reassigned its head climate scientist after he, imagine this, talked about climate change; and then the Trump administration's foray into weather forecasting, when there was a Sharpie used to alter the weather map to make it look like Hurricane Dorian was hitting Alabama.

CURWOOD: And we heard that the people at the National Weather Service were going to get in trouble if they didn't agree with the White House assessment.

DYKSTRA: They were politely told to agree. That's one more example of how science is being run off the rails in the Trump administration.

CURWOOD: And elsewhere in the broadcast, we have the story of six whistleblowers that have been -- well, should we say, blockaded in their efforts to report on climate related science. 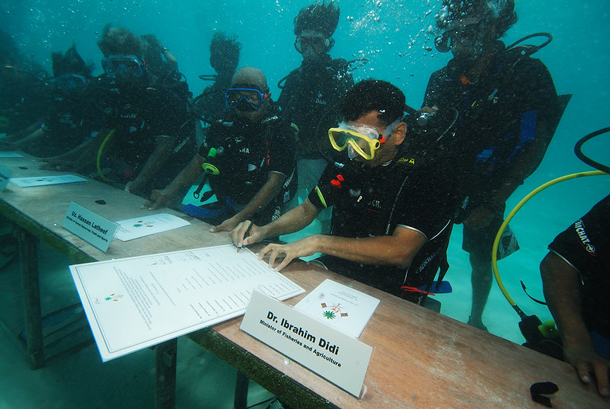 It’s the ten-year anniversary of the underwater cabinet meeting the government of the Maldives held to highlight the threat that climate change poses to the low-lying island nation. (Photo: Presidency Maldives, Flickr CC BY-NC 2.0)

DYKSTRA: There's a lot to talk about with whistleblowers these days.

CURWOOD: Certainly is! Hey, let's look back in the annals of history to -- to what, Peter? What are we going to look at?

DYKSTRA: Well, I've got a 10th anniversary going back to October 17th, 2009. And the reason is struck me is that it's the 10th anniversary of a bit of theatrics to show the urgency of climate change -- we've been doing this for 10 years already. Specifically, 10 years ago, the President and the entire cabinet of the Maldives, an island nation in the Indian Ocean, held a Cabinet meeting underwater. 30 minutes, about 13 feet under. The President, Mohamed Nasheed, his cabinet ministers, his vice president, all met underwater. A few months after that, they were deposed in a peaceful coup. And now here we are 10 years later, the Maldives still looking at the prospect of being completely underwater -- not the cabinet, the whole country by the end of the century.

CURWOOD: Yeah, you know, I remember that Peter. In fact, seeing pictures of the president and his cabinet with scuba gear, their masks and flippers, poring over some, I guess, waterproof papers there.

DYKSTRA: They must have been; I'm not sure how much they got done, but it certainly was the most newsworthy cabinet meeting in the Maldives in world history.

CURWOOD: And there's more of these stories at our Living on Earth website. That's LOE dot ORG.

Journal article: climate science acceptance is on the decline among U.S. policymakers

Ten years ago, the government of the Maldives held a cabinet meeting underwater to highlight the threat of climate change