Living on Earth’s Explorer in Residence Mark Seth Lender has seen pronghorn antelopes many times, and at his approach they usually turn tail and run. But when a less timid pronghorn antelope stands his ground, an opportunity arises for a closer encounter.

In the southern part of their range pronghorn antelope are slight of build, very fast, and intolerant of humans. You may see them mostly on the run. But further north, they are much bigger, a response to the cold climate. As Living on Earth Explorer in Residence Mark Seth Lender tells it, northern pronghorn expect you, not them, to do the running!

Heading west, the highway cuts New Mexico in two. Left, the otherworldly telescopes of the very large array listening to outer space, the great disks still, as if in meditation. While, right here on earth a herd of pronghorn antelope roam and graze; come anywhere halfway close to them they raise dust, right up to the stratosphere. 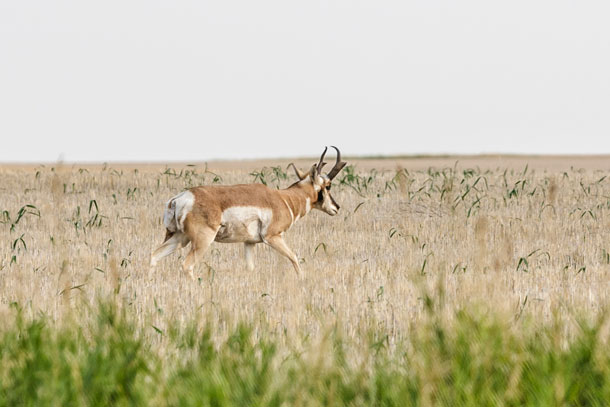 Pronghorns can be found as far north as Saskatchewan and as far south as Mexico. (Photo: Mark Seth Lender)

Odd name for them. They look like stunted deer, deer whose antlers never did grow.

Head north and cross into Saskatchewan, the story progresses differently.

Often in the morning there would be mule deer, three and four with eight point racks, the mist still on the fields all rolling plains of yellow flowers and dawn no more than a gray suggestion on the sky. Prairie dogs and hawks, of course. Coyotes sometimes, distant, and rightly fearful. Even the mule deer took one look and ran.

Pronghorn were the last thing I expected -

But here they were. In good light now. Just across the section fence on the other side of the road.

I pulled the truck off onto the dirt and slowly lowered the window on the driver’s side, which, south of here, the pronghorn I was used to? They would have been long gone.

But no. The lead buck has that look on his face. Watchful. But not in an obvious way. He holds my gaze just a little longer than he would if he were nervous and not so long as if he were warning me away. It’s “Yup, I see you there.” And keeps himself between me and the females he has sequestered to himself. And lets them graze. And stays while the herd drifts further and further away. And lowers his head ever so slightly. 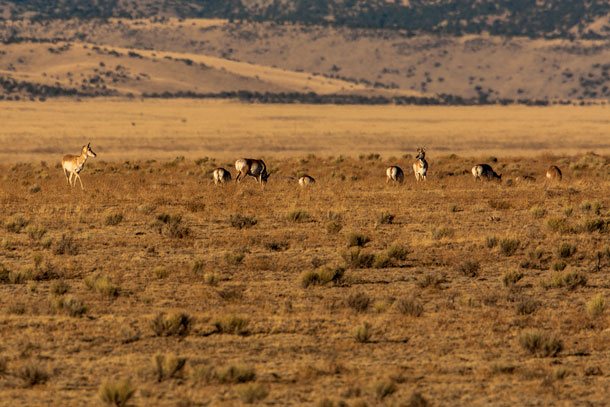 Skittish and slight of frame, Southern Pronghorn say, "Keep your distance; or we run away." (Photo: Mark Seth Lender)

He does not come towards me. Not a matter of deference. Only, the limit of his threat, set by me doing the same and not coming towards him. Broad-in-the-shoulders, the muscles of his chest bulging (like in his free time he’s doing deadlifts), his height, and the way the horns progress thick at the base then narrowing to a point. And plenty long enough. And those hooves. He has a hundred pounds on his southern cousins, more than that on me. He just stands there. Like a tree.

And I? I am only passing through.

Learn more about the pronghorn antelope

Special thanks to Destination: Wildlife