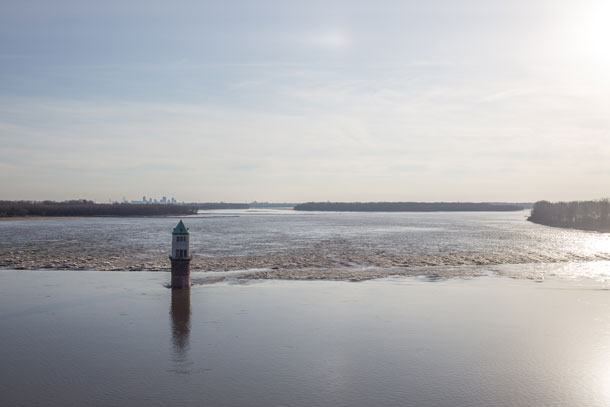 Beaches along the Mississippi Gulf have been affected by high levels of cyanobacteria, often called blue green algae, which can be toxic to beachgoers. (Photo: Paul Sableman, Flickr, CC By 2.0)

In this week’s Beyond the Headlines Peter Dykstra joins Host Bobby Bascomb to take a look at how algal blooms have turned tourist beaches on the Gulf Coast into ghost towns. Then, the two discuss “happy hour” efforts by a Finnish grocery store to reduce food waste. In the history calendar, they travel back to 1900, when the United States’ ban of Cuban weather bulletins had deadly consequences.

BASCOMB: It's time for a trip now beyond the headlines with Peter Dykstra. Peter is and editor with environmental health news. That's EHN.org and DailyClimate.org. Hey there, Peter, what do you have for us this week?

DYKSTRA: Hi, Bobby. We've got some good news and bad news. And let's get the bad news out of the way. Even the bad news has a little bit of good news. Because there's one place right now where you can take a nice, lonely walk on the beach in a place that's usually crowded with tourists.

BASCOMB: Okay, where's that?
DYKSTRA: That'd be the Mississippi Gulf Coast. And the reason it's been empty pretty much since the Fourth of July the whole tourist season is that there's a huge bloom of cyanobacteria, blue green algae, that's hit the Gulf Coast.

BASCOMB: Why is it so bad there this year?
DYKSTRA: Because of the rain in the upper Midwest, that washe huge amounts of water and creates floods up there. The floods carry farm fertilizers in huge amounts, they get offshore, they create the dead zone that we've all heard about in the Gulf. And right now there's a blue green algae bloom off the Mississippi beaches. Casino towns like Biloxi, and quaint little beach towns, like Waveland, are taking a hit with the tourist trade down as much as 70% since the Fourth of July.

BASCOMB: Wow, yeah, this must be an important time of year for them for you know that tourist revenue.

DYKSTRA: It is, they depend on it. And of course, this would be the third thing in the last two decades. That's completely knocked the tourism industry down in 2005. Of course, it was Katrina, that utterly destroyed a pretty little town like Waveland. And in 2010, we had the Deepwater Horizon oil spill in the spring, just before tourist season. They've gotten knocked down, they've got back up again. And here comes a third wave that's really hit Mississippi tourism hard.

BASCOMB: All right. Well, I think you promised us some good news too? What do you have?

DYKSTRA: Oh, sure. The good news is a neat idea. And it involves happy hour. And who does that like happy hour? 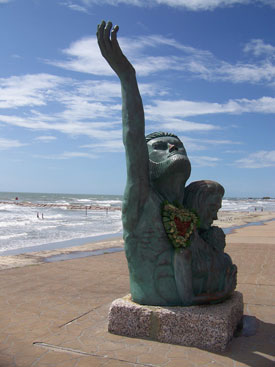 Memorial of the tragic Galveston Hurricane of 1900. (Photo: Sarah Page, Flickr, CC By 2.0)

DYKSTRA: In Finland, there's a grocery chain called S-Market. They have over 900 stores, some big ones, some small ones. And at nine o'clock every night, there's a happy hour of sorts, where they sell meat and fish that are getting near their expiration date.

BASCOMB: So happy hour, you could actually meet someone over meat, is that the idea here?

DYKSTRA: Meet someone over meat, get a date, near the expiration date. And that's important because not only can folks get a bargain on food that's still edible, but there's over 1.3 billion tons of food wasted in the world each year, according to the UN. And if we liquidate that meat and fish rather than toss it out, it's a beginning to saving some of that huge amount of waste. The UN also says that fully one third of the food the world grows ends up getting wasted. That's a waste of money. It's a waste of labor. It's a waste of fossil fuels to run the farm equipment. It's a waste of water. It's an unseen tragedy that we can do better than, and this is one little idea that could help.

BASCOMB: Hey, well, let's see if it catches on. What do you have for us from the history vaults this week?

DYKSTRA: With all of the uproar lately about politicizing the hurricane map, let's look back to some really tragic politicizing. September 8, 1900, hurricane forecasting was vague enough, it was mostly guesswork. But the US had gotten a warning from Cuba's weather service that a big storm might be headed toward Texas. The only problem with that is that the US Weather Bureau hated the Cuban weather service. And the boss of the US Weather Bureau banned all use of Cuban weather bulletins. And what happened is that 7,000 people died when the great hurricane of 1900 hit the city of Galveston with high winds and flooding storm surge.

BASCOMB: Man so you can have your beef with whoever but nature always bats last.

DYKSTRA: Yeah, whether it's climate change, or floods or anything else. Nature doesn't have any politics. And it's a good reason to respect what we hear from scientists, whatever problems you have with the country that science comes from.

BASCOMB: Yeah, exactly. All right, Peter. Well, thanks was nice chatting with you. Peter Dykstra is an editor with Environmental Health News. That's EHN.org and DailyClimate.org. We'll talk to you again real soon.

DYKSTRA: Thank you, Bobby, and we'll talk to you soon.

BASCOMB: And there's more on the stories on our website loe.org.

Awesome Stories | “Galveston and the Great Storm of 1900”

The New York Times | “The World Wastes Tons of Food. A Grocery ‘Happy Hour’ is One Answer.”