Miners Pollute the Sea of Cortez 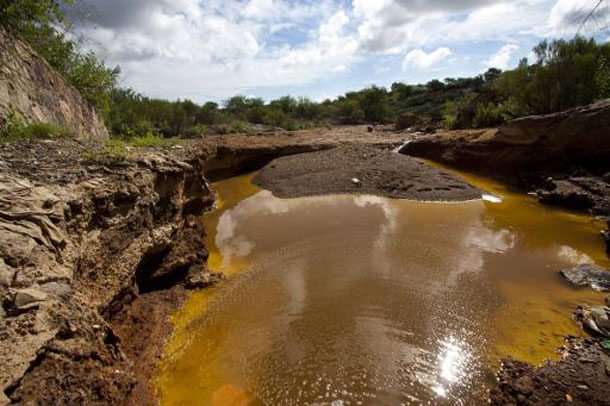 Contaminated water near the Buena Vista copper mine in Cananea, Sonora taken on August 2014. (Picture: Cananean Community, Courtesy of phys.org)

On July 9, 2019, a facility operated by mining company Grupo Mexico spilled thousands of liters of sulfuric acid into the Sea of Cortez. It’s not the first time the company has come under fire for spilling toxic chemicals into the environment: in 2014, 11 million gallons of copper sulfate and heavy minerals spilled from a copper mine it operates in Sonora, contaminating major rivers and creating a local environmental disaster. Kendal Blust, a correspondent for public radio station KJZZ, discusses public outcry over the spill with Host Bobby Bascomb.

The Sea of Cortez in Mexico is home to a wide range of endemic marine life, found nowhere else on earth and it’s a critical stopover for rare migrating animals, including humpback whales. Local and commercial fishermen depend on its abundance for their livelihoods. So, a recent spill of sulfuric acid into the Sea of Cortez sent locals to the streets in protest.

BASCOMB: The mining company, Grupo Mexico, was responsible for the spill and several other environmental accidents. For more, we turn to Kendal Blust, a reporter for member station KJZZ in Phoenix, Arizona. She joins me now from Hermosillo, Mexico. Kendal, welcome to Living on Earth.

BLUST: Thank you. Thanks so much for having me.

BASCOMB: So, what exactly happened with this recent spill?

BLUST: This spill happened on July 9, there was a failure in a valve between pipes that were transporting sulfuric acid. And they were being loaded on ships there in the port of Guaymas, Sonora, off of the Grupo Mexico facilities, and there was a spill. About 3,000 liters of sulfuric acid spilled into the port of Guaymas in Mexico's Sea of Cortez. And that has caused since then, a lot of concern about what the impacts of that spill are, and what it means about how Grupo Mexico is operating.

BASCOMB: And what are the environmental concerns associated with a spill like this in the Sea of Cortez?

BLUST: There is a lot of concern about it hurting marine life, it hurting the livelihoods of fishermen who work there, people who live by the sea, and the tourism in the area. What researchers are saying, what experts who have tested the water are saying is that there was an immediate impact in the area where the spill happened. There were some dead fish found. But because of the relatively low amount of acid that spilled and the large body of water that it spilled into, it was diluted pretty quickly. And there's little expected consequences to come from this. So, the pH levels of the water, which is the main concern, that they'll become acidic when acid spills, they went back to normal levels within a day or so.

BASCOMB: This is not the first time that Grupo Mexico has come under fire for spilling toxic chemicals into the environment. Can you tell me a bit about the history with this company?

BLUST: Absolutely. This spill itself, of course, has people worried and, you know, seeing a video that came out a couple days later and seeing, you know, white stuff spewing out of these pipes makes people worried. But what is more concerning isn't this specific spill, but sort of the continued pattern. And it's almost five years to the day when a much larger spill happened here in Sonora in August 2014, when about 11 million gallons of copper sulfate acid solution spilled from Grupo Mexico's Buenavista copper mine in Cananea, Sonora. It spilled into the Bacanuchi River, which is a tributary of the Sonora River. Both of those waterways were contaminated. And that's water that serves thousands of people in Sonora. So, that in itself was a huge disaster. And about a month later, there were heavy rains that overflowed dams that swelled the rivers, and that caused agricultural areas near the rivers to be soaked with that contaminated toxic water. So, the impacts of that spill were much greater. People still are feeling the impacts in a lot of ways. It was a really confusing and a really scary time for a lot of residents in the communities around the Rio Sonora. So, this spill, rather than being itself a huge disaster, is a reminder of the disasters that have happened before, and that can happen again. 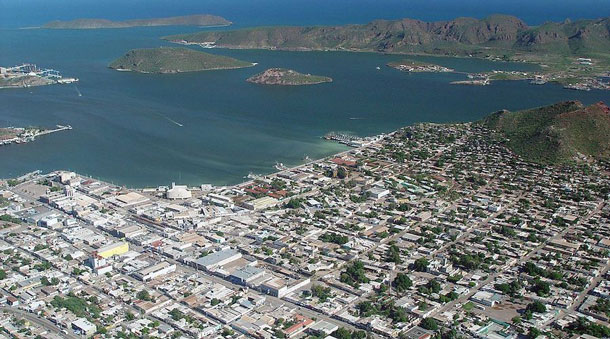 The port of Guaymas, Sonora is located next to the Sea of Cortez. (Photo: Intersofia, Wikimedia Commons, Public Domain)

BLUST: Yeah, at the time in 2014, the government's response was a big concern for a lot of people. In the years preceding that spill, they had not been carrying out investigations. And once the spill happened, and they started doing investigations, they found a lot of things that were going wrong at the mine. In this case, both PROFEPA and Mexico's environmental agency, SEMARNAT have been investigating this case since the day after it happened. They've made visits, and in fact, have closed partially those facilities on a temporary basis, because they found that Grupo Mexico did not have the proper environmental authorizations or permits to be carrying out some of its activities at that facility. And so, I think the question for a lot of people is, why are these things found after the fact? Why didn't anyone know that they were operating without the proper permits, before a spill happened? A lot of concern that people have is that the response after the spill in 2014 was inadequate. There were also a lot of broken promises, there were promises of potable water that would be provided that never actually happened. There were promises of medical clinics that would be built to attend to people who were having either acute medical problems from the immediate spill, or having long-term medical issues because of the spill, whether that's things that will show up in the future. Heavy metals can cause cancer, and a lot of people don't know what kinds of contaminants they might have come into contact with. So, that's, I think, where a lot of the distrust comes from. It's both a distrust that companies like Grupo Mexico, these extraction companies, these are large companies, are following the procedures that they should be, that they're looking out for people, but also that if the government is going to hold them accountable.

BASCOMB: So, people have that on their mind now, during this current spill, and are pretty upset from what I gather.

BLUST: Absolutely, there's a distrust that there's anybody looking out for them. And because of that, a lot of people at protests and, you know, coming on to news media here are saying that they want to see Grupo Mexico completely expelled. They want their concessions here in Mexico, not just in Sonora, in Mexico to be revoked. And one woman I spoke with yesterday about the closure of the facilities said that that's just not enough. It's not enough for her. And it's not enough for a lot of protesters and a lot of people who are concerned about their communities to close one facility on a temporary basis. They want to see that this kind of thing won't happen again.

And the President has said that Grupo Mexico won't have any special offers, they won't get any special deals and that they're going to hold them accountable. But he's also said he wants to hear from Grupo Mexico, he wants to know all the facts. And they need to protect jobs that are created by Grupo Mexico's mines and other operations. So, I think it's a very open question of what will happen. I think asking for Grupo Mexico's concessions to be completely revoked -- it's a big ask, and I think we don't know yet what's going to happen. But it's certainly a question both on the minds of local residents and clearly on the minds of government officials.

BASCOMB: Kendal Blust is a reporter with the NPR member station KJZZ. Kendall, thank you so much for taking this time with me.

Greenpeace | “Toxic Spill in Sonora The Tip of the Iceberg”