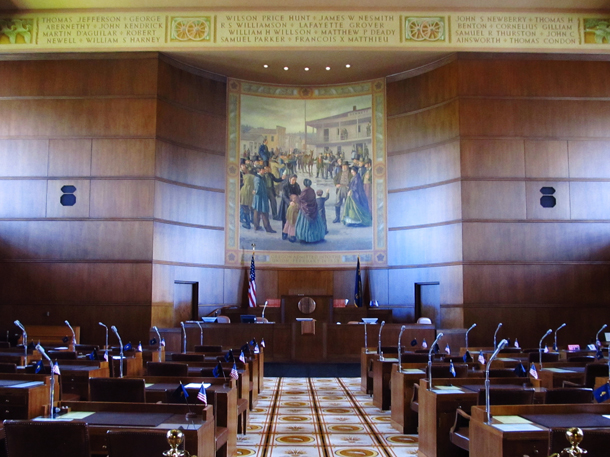 To avoid a vote on climate change legislation, the Republican members of the Oregon State Senate walked out on a session, making it impossible for the legislators to reach a quorum on any issue. (Photo: Jasperdo, Flickr, CC BY-NC-ND 2.0)

For this week's trip beyond the headlines, Peter Dykstra and Host Bobby Bascomb discuss how Republican members of Oregon's State Senate walked out to avoid a vote on climate change legislation. Then, the pair discuss Cold War-era spy satellite data that scientists are using to estimate current ice and snow level loss in the Himalayas. Finally, a look back in history to the relocation of Soldiers Grove, Wisconsin to evade a flooding river.

BASCOMB: It's time for a trip now beyond the headlines with Peter Dykstra. Peter's an editor with Environmental Health News. That's EHN.org and DailyClimate.org. Hey there, Peter, what do you have for us this week?

DYKSTRA: We'll start with the state of Oregon, where there's been kind of a bizarre political play unfolding over the past couple weeks. Oregon State Senate is dominated by Democrats. Republicans hold only 12 of the 30 seats. And in order to prevent any vote on a climate change cap and trade bill, Oregon's Republican senators have apparently literally left the state. They can't stop the bill from passing, but what they can do, is they can stop the Senate from having a quorum to vote on anything.

BASCOMB: Mmhmm. And I understand that this actually had the potential to turn violent.

DYKSTRA: There were suggestions that it could turn violent. One Republican state senator invoked the possibility of having armed militia protect the Republican senators who have gone into hiding. And that's a twist. This is actually not a new political tactic. In places like Wisconsin, where the Democrats were in the minority two years ago, the Dems left the state to prevent a vote on a very strong anti-union bill.

BASCOMB: And of course, Oregon is no stranger to armed militias. There was the incident back in 2016, of a militia taking over the National Wildlife Refuge there.

DYKSTRA: Right. And that ended up with actually one fatality, one of the militia was killed in a car accident. Fortunately, the violence didn't get out of hand, wasn't any worse than that. It's still a kind of a scary situation.

BASCOMB: And so what's the latest with the Republicans?

DYKSTRA: The President of the Oregon State Senate has said they don't have enough votes, even with most of Democrats to pass the climate change legislation, so they've essentially caved. And in this case, the tactic of leaving the state, with the specter of armed militia getting involved, has apparently worked.

BASCOMB: Alright, well, we'll see what happens there, then. What else do you have for us this week? 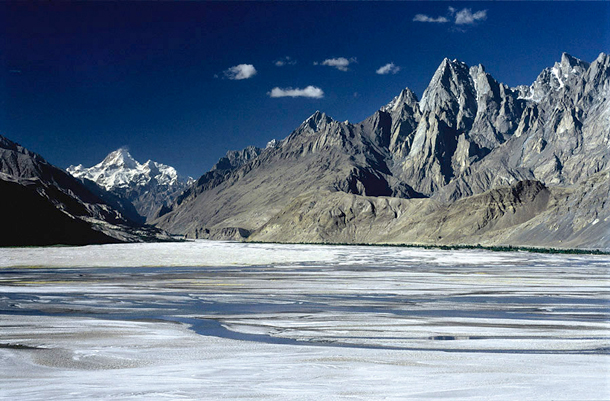 Over 1.4 billion people rely on water from rivers of the Himalayan Mountain Range, including those in the Hushe River Valley. (Photo: Zerega, Flickr, CC BY-NC-ND 2.0)

BASCOMB: Well, why was the US government interested in that sort of information to begin with?

DYKSTRA: Well, intelligence agencies have long acknowledged that aspects of climate change are huge global security issues, and a billion people without water certainly qualifies as a security issue.

DYKSTRA: Go back to 1978, early July, the town of Soldiers Grove in southwestern Wisconsin is wiped out by flooding of the Kickapoo River. It's at least the third time that downtown Soldiers Grove has been underwater and seriously damaged or destroyed. The town had already decided to relocate itself, but they had trouble getting money from the federal government. After the 1978 disaster, the feds came through. Soldiers Grove, moved itself uphill. The move was a success. Downtown would have been wiped out at least twice more since then by other floods. But the former downtown area is now a park, not a huge disaster if it floods, and downtown Soldiers Grove is safe. 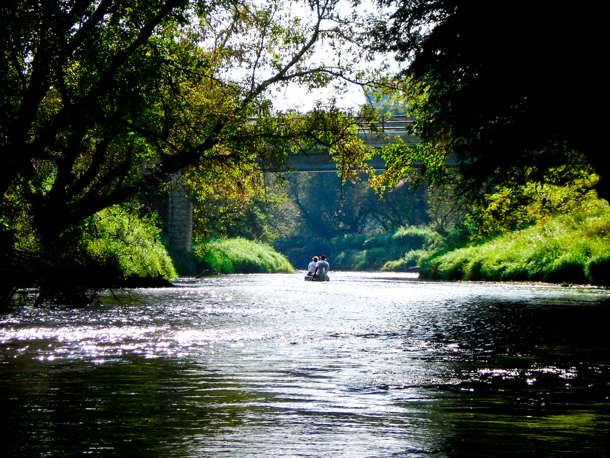 The Kickapoo River flooded several times throughout 2007 and 2008, but due to the decades-past Soldiers Grove relocation, the town’s financial center was spared from the majority of the damage. (Photo: Ryan Rowley, Flickr, CC BY-ND 2.0)

BASCOMB: So maybe lessons learned for other coastal towns that will be dealing with flooding and sea level rise in the future?

DYKSTRA: Right. There's been one successful effort, had nothing to do with climate change. But in 1964, the town of Valdez, Alaska, the famous oil port, was moved six miles away and uphill. The town of Valdez sprawled along the ocean port. It was destroyed by an earthquake-driven tsunami on Good Friday, 1964. The new town is safe from tsunamis and presumably sea level rise as well. Sea level rise, of course, caused in part by all that oil.

BASCOMB: And there's more on the stories on our website LOE.org.

Read more about Soldiers Grove and their history with floods