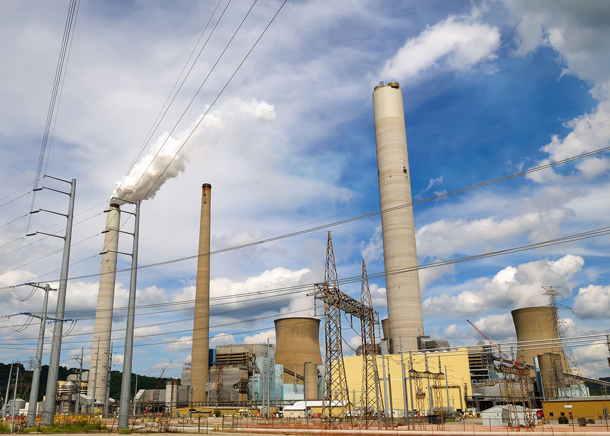 The US EPA recently finalized the Affordable Clean Energy (ACE) rule to replace the Clean Power Plan of the Obama Administration. The ACE rule is expected to be challenged in the courts, as it does little to reduce greenhouse gas emissions, and could result in up to 1,400 additional deaths from air pollution each year. Vermont Law School Professor Pat Parenteau tells Host Bobby Bascomb about the legal road ahead for the ACE rule.

The Trump Administration EPA recently finalized the Affordable Clean Energy rule. The new rule would replace the Clean Power Plan, put in place under President Obama, with the goal of reducing greenhouse gas emissions. The Clean Power Plan never actually went into effect and is still stalled in the courts. Likewise, the Affordable Clean Energy rule is expected to be challenged in the courts by a number of states and environmental groups. The EPA’s own analysis found the rule would result in up to 1400 additional deaths each year from air pollution. And the ACE rule would do little to actually reduce greenhouse gas emissions. Here to explain is Vermont Law School Professor Pat Parenteau. Pat, welcome back to Living on Earth!

PARENTEAU: Thanks, good to be here.

BASCOMB: So, first of all, Pat, what's the key difference between the Clean Power Plan and the Affordable Clean Energy Rule in terms of how they would each limit carbon pollution?

PARENTEAU: Yeah, well, it's a night and day comparison, because the Clean Power Plan was targeted to reduce carbon emissions by 35% by 2030. This replacement rule that they call the Clean Energy rule would, at best, reduce carbon emissions by 0.7%, which is negligible. And in fact, there are some studies that show that because some of the plants that will be allowed to continue running, these are coal-fired power plants, of course, they could actually result in a net increase in carbon emissions as well as other pollutants.

BASCOMB: So, it's really not doing anything then in terms of reducing our emissions problem.

PARENTEAU: No, it isn't. And ironically, the statute, the Clean Air Act, upon which these rules are based, requires the use of the best system of emission reduction when it comes to carbon pollution and other pollutants, like fine particulates, smog, sulfur dioxide, and so forth. You can get arguments about how broadly to interpret that term; the Clean Power Plan interpreted "system" to mean, the grid system that powers our electricity in the country -- this case, and this rule is just about electricity generation. The Trump administration has taken the narrowest possible interpretation in saying we're only going to look at individual facilities, whereas the Clean Power Plan took the approach, why don't we look at the grid system that's integrated as a whole, and look at different options for dispatching cleaner sources of energy when they're available -- solar, wind, gas -- and not relying so heavily on coal-fired power plants. But of course, that runs squarely against President Trump's campaign promise that he was going to do everything he could to restore coal-mining jobs, and to keep coal-fired power plants operating indefinitely. So this proposed energy rule of the Trump administration is almost the worst emission reduction plan. And it's a very expensive plan, that won't do very much at all.

BASCOMB: Well, what are the costs of the Trump administration's proposal as compared to the Clean Power Plan?

PARENTEAU: Well, the Clean Power Plan did a very comprehensive economic analysis of all the different benefits of converting from dirty fossil fuel plants, particularly coal plants, to these cleaner, alternative sources such as solar and wind and more efficient natural gas projects. Those benefits, net benefits would have been in the billions of dollars, according to the EPA analysis that was done for the Clean Power Plan. This new rule actually will result in a net loss of several hundred million dollars actually a year. This new rule really doesn't require reductions, it gives the states kind of a menu of things they could do to improve the efficiency of how individual coal plants operate. But it really doesn't even mandate emission reductions at all, it really leaves it up to the states to decide, and a lot of these techniques for improving what they call the heat rate efficiency of these plants, they're very expensive. So if you're not significantly reducing pollution, but you are requiring the use of these expensive technologies, you end up actually costing the American economy money, instead of saving money, which is what the Clean Power Plan at least argued that it was going to be doing. 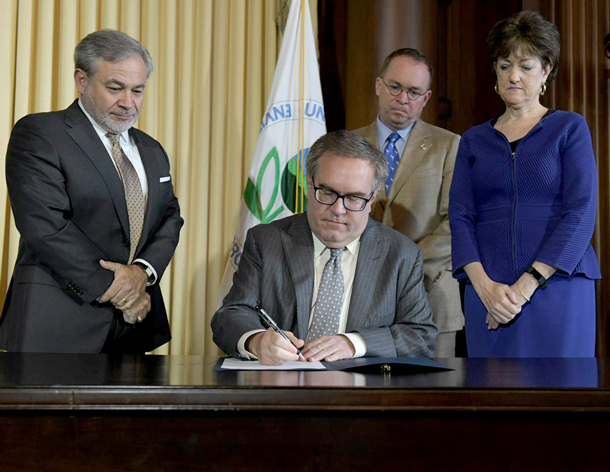 EPA Administrator Andrew Wheeler signed the ACE rule in June, but it is likely to get challenged in the courts. (Photo: @EPA on Twitter)

BASCOMB: Can you remind us please, Pat, why is the EPA required to regulate carbon pollution in the first place?

PARENTEAU: Right, so the Supreme Court in the famous Massachusetts vs. EPA case back in 2007, said if EPA makes a, what's called an endangerment finding, if EPA finds that carbon pollution and other greenhouse gases threaten public health and security, then it must take actions to reduce those emissions, which of course would make sense, wouldn't it? And so the Supreme Court has said now, three times in three different cases, EPA has a duty to regulate these emissions, both from power plants and many other sources, industrial sources, and of course, motor vehicles. So that's going to be the legal question in court is, can you literally adopt a rule that will do almost nothing to reduce these emissions in the face of a statute that says you must take meaningful action?

BASCOMB: So the Clean Power Plant is currently tied up in the courts, and it looks like the Affordable Clean Energy rule is heading down the same road. What does that mean, in the meantime?

PARENTEAU: Yeah, a lot of people have thought the Clean Power Plan was dead, and it's actually maybe comatose, but it's not dead. It's been held, put on hold, as a result of the Supreme Court's decision to put the litigation on hold until this new rule from the Trump administration has had a chance to be published. Now that the rule has been published, the DC Circuit Court of Appeals, which is the one court that reviews these kinds of rules, is going to have to compare the two plans, and compare the two interpretations, from the Obama administration's interpretation with the Clean Power Plan, Trump administration with the Clean Energy rule. And the DC circuit is going to have to decide in the first instance, which interpretation is more consistent with congressional intent, and with the language of the statute. And then from there, of course, there will be an attempt to get the Supreme Court to weigh in. And I think the Supreme Court probably will eventually weigh in on this, because it's a very major rule. It has important implications for the economy, for public health, and certainly for dealing with climate change. So, we could still see an outcome in this case, that validated the approach taken by the Clean Power Plan, which would be not what the Trump administration is after, of course. Their primary goal, I think, in promulgating this new rule is to get the courts to decide once and for all, that the Clean Power Plan approach is illegal. That's of course what the Trump administration has been saying about it. They may be surprised by the court saying that it's not illegal. The courts may say it needs to be revised or reviewed in certain ways. But the outcome could certainly be that the core of the Clean Power Plan could be upheld, even by this conservative Supreme Court. So we'll have to wait and see if that's the way it plays out, but it could.

BASCOMB: Mmhmm. Does it seem unusual to you that the Supreme Court decided 10 years ago that carbon emissions had to be seriously addressed from the endangerment finding, and yet we're still trying to figure out how to actually implement it?

PARENTEAU: Well, sure. And I guess the even more striking irony is that the marketplace has already decided to shift to cleaner sources of energy. Solar and wind are the fastest-growing energy sources not only in the country, but in the world. Coal has been reduced to a fraction of its former importance in our energy mix. Natural gas, of course, has come on very strong. So these legal questions about how far the rule should go to limit these emissions is being eclipsed, really, by the marketplace, which is saying, we can find more reliable, more affordable, cleaner sources of energy than coal, and even oil and gas. And that's where the future lies. And so the law is actually trying to catch up with where the market is driving energy systems across the world.

BASCOMB: Pat Parenteau is a Professor with the Vermont Law School. Thanks so much, Pat.

PARENTEAU: Thanks, Bobby. Good to be with you.