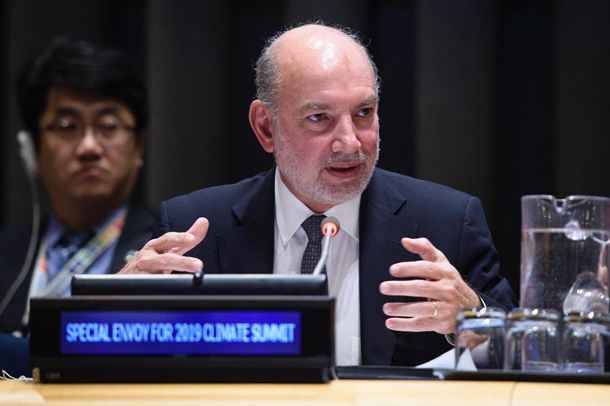 The United Nations is preparing for the Climate Summit this September, where many countries are expected to boost their Nationally Determined Contributions, or NDCs, under the Paris Climate Agreement. Luis Alfonso de Alba is the United Nations Secretary-General's Special Envoy on Climate Change, and he joins Host Steve Curwood to talk about concerns and hopes of keeping planetary warming from increasing more than 1.5 degrees centigrade.

The United Nations is gearing up for a Climate Summit in New York in September, and already a number of nations have hinted they are boosting their nationally determined commitments or NDCs they first made under 2015’s landmark Paris Climate Agreement. Every country in the world is currently a signatory to Paris, and the hope is there will be enough action to keep the planet from warming more than 1.5 degrees Celsius. That’s a tough goal, considering Earth is already about 1.1 degrees warmer than pre-industrial levels. Still, more than 190 nations are expected to pledge more ambitious goals, though President Trump says he wants to take the US out of the Paris deal as soon as it becomes possible in November of 2020. Here to tell us more is Luis Alfonso de Alba, the United Nations Secretary General’s Special Envoy on Climate Change. Ambassador de Alba, welcome to Living on Earth!

DE ALBA: Thank you. Very nice to be with you, Steve.

CURWOOD: So just how many countries are saying that they're going to increase their ambition, increase their Paris Climate pledges, ahead of schedule?

DE ALBA: Well, this is a process that is evolving on a daily basis. For the time being, it's between 80 and 100 countries who have expressed the will to engage.

CURWOOD: Now, none of these countries, I gather, are making their intent public. When can we expect them to go public?

DE ALBA: Well, the first opportunity would be the summit itself, because they have been invited by the Secretary General to come within enhanced NDCs.

CURWOOD: So how important is this summit of world leaders in September, with regards to the climate?

DE ALBA: Well, I think it is a critical one, because as you know, the Paris Agreement has gathered the support of the international community and it has an ambitious agenda. But it needs to be sped up, the process of implementation, and scaled up. Because today, we know that we need to do much more, and much faster.

CURWOOD: If you look at the actual emissions from various countries, how far are we along in terms of commitments to reduce those emissions? 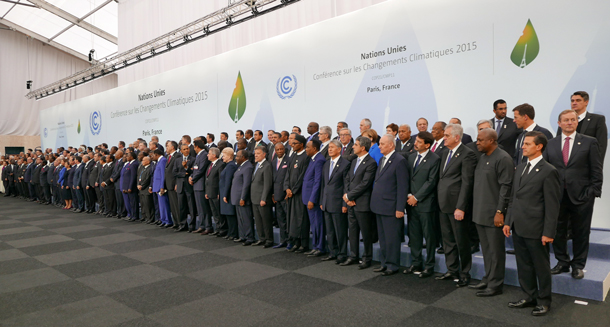 At the 2015 United Nations Climate Change Conference in Paris, heads of government and states from 185 countries reached an agreement on how to combat climate change. Now, countries under the Paris Accords are beginning to hint at plans to ramp up their pledges ahead of schedule. (Photo: Presidencia de la República Mexicana, Flickr, CC BY 2.0)

DE ALBA: If we take what governments have committed today, you will have about one third of what is needed to reduce emissions by 45% by 2030, and go to carbon neutrality by 2050. That's the goal. The emissions are very much concentrated on a small number of countries. And that's why one of the objectives of the summit is to target the G20 members, or the major emitters. We are also adding a few more countries that may become major emitters in the near future. And if you take those countries, you will have close to between 85 and 90% of global emissions.

CURWOOD: Now the Trump administration is looking to pull the United States out of its pledge under the Paris Accord at the same time. How would this affect the goals of the Paris Agreement?

DE ALBA: I think you need to take into account what the US is doing in general, and then the implications of pulling out of the Accord. I think the United States in general is doing a lot to fight climate change. And you can you can see that in a number of areas, and a number of commitments by the business sector, by local authorities in different parts of the States. And that contribution will continue to grow. And it's quite important, because the level of emissions of the US is one of the biggest. The pulling out of the Paris Agreement is a political decision the administration has taken. We certainly regret that decision, because we would like all countries to be fully involved into the process, and by being part of the process, give more strength to the Paris Agreement. But the Paris Agreement will continue, with the commitment of all the member states that have expressly committed. There was a possibility of some other countries stepping back. There were a few signals coming from Brazil, for instance. And they have recently recommitted to the Paris Agreement. And we are very pleased with that decision.

CURWOOD: What's your hope? That virtually all the countries, I guess, except in the United States at this point, will increase their pledges under the Paris Climate Agreement?

DE ALBA: I'm pretty sure that we will get there. The big question is not whether they will increase their ambition. I'm very optimistic about that. The question is that we need that very substantial increment in the ambition. So, we are looking not only on increasing the political will and the commitment of member states, but also to identify the areas on which innovation, on which the scaling up a number of initiatives could also help us speed up the process. We need to help member states to be able to increase substantially their NDCs. And that's part of, is the fundamental part of the Summit. It's not just an appeal to increase, but it is an opportunity to show the countries, the member states, how it can be done.

CURWOOD: And lastly, what would you see as success out of the Summit?

DE ALBA: Well, I think success would be certainly an increase on the level of ambition globally. I would see success in a process that will be constant, continuous, that will allow transitions, but at the same time will be constant, and will be including an increased number of sectors and areas on which we are working. I think success would be very much focused also in as much as governments understand that this is an issue that affects the economy as a whole. And not only the environment agenda.

CURWOOD: Luis Alfonso de Alba is the United Nations Secretary-General's Special Envoy on climate change. Ambassador, thank you so much for taking the time with us today.

DE ALBA: Oh, thank you. Thank you very much, Steve, it has been a pleasure to be with you.

Find out more about the UN Climate Action Summit 2019

United Nations | “The Task Ahead: Special Envoy de Alba Aims to Galvanize the World to Do More and Better”