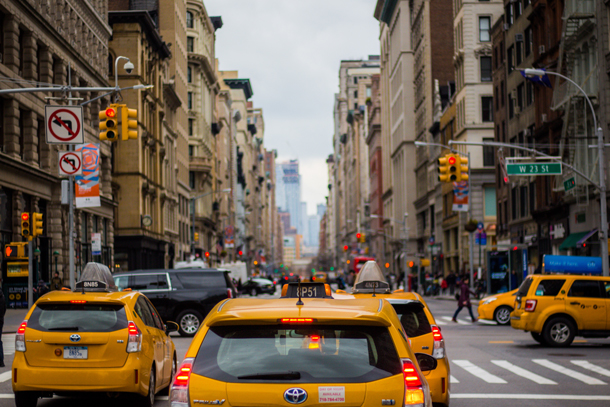 New York City just became the first in the nation to adopt a congestion pricing plan. It’s expected to raise about a billion and a half dollars in revenue every year mostly for its crumbling subway system and cut down on some of Manhattan’s infamous traffic south of Central Park. Drivers who pay a $12 or so fee should also benefit from less congestion. Transport economist Charles Komanoff speaks with Host Steve Curwood about why he believes congestion pricing will make getting around New York City more efficient, reliable, and humane.

CURWOOD: Anyone who’s been to New York City knows that Manhattan is almost a continual traffic jam certain times of day and its aging subway system needs help. But getting around the city will soon be a little easier, thanks to a new congestion pricing scheme that will charge fees if people bring vehicles to Midtown and Lower Manhattan, and use that money to fund public transit. London, Stockholm and Singapore have already adopted such plans, though New York would be the first in the US. And in 2021 it would begin charging private passenger cars an estimated $12 or more during peak business hours, though the exact fee has yet to be set. Transport economist and environmental activist Charles Komanoff directs the Carbon Tax Center and has advocated for congestion pricing in New York City for years.

KOMANOFF: It's a real pushing back against the automobile, which is sorely needed in my hometown of New York City and in other major cities throughout the country, and really around the world, where the automobile has been permitted to dominate, not just travel and transportation, but streets and public space and the very life of great cities. And the other is that the advent of congestion pricing for New York City is going to represent the first time that anywhere in America is going to tax or charge or put a considerable price on an environmental harm. And here, the environmental harm that's going to be charged with congestion pricing is not tailpipe emissions, it's not carbon emissions. It is the physical presence of the car itself that contributes to traffic congestion, that slows down other drivers as well as buses and pedestrians and bicyclists, etc. But the idea of taxing or charging an environmental harm has been a really tough sell in the United States, especially with carbon emissions. And now New York City is going to blaze a path and do that for congestion. And so maybe that will spill over sometime down the road for carbon pricing. 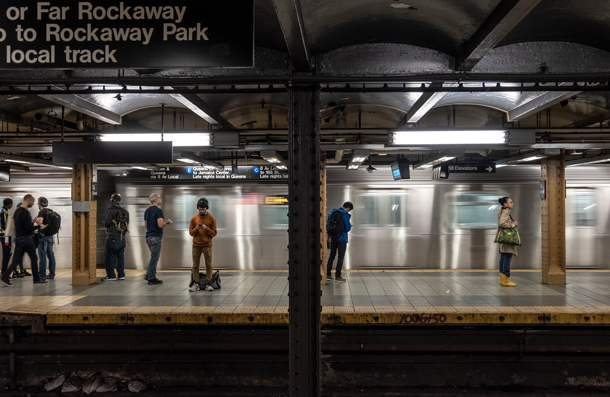 The major share of the approximately $1.5 billion in yearly revenue from the congestion pricing plan is expected to go a long way towards modernizing New York City’s aging subways. (Photo: Pat Krupa on Unsplash)

CURWOOD: So talk to me about the money involved here. What are your projections as to how much money will come into the coffers of New York City as a function of this congestion pricing?

KOMANOFF: Well, about a billion and a half dollars a year. And I want to split that between about a billion that's going to come from the car and truck trips that are going to be charged when they cross into the heart of Manhattan, the Manhattan central business district; and another half a billion, roughly, from charging yellows and Ubers and Lyfts — only for trips that ply the same district, actually it extends a little bit further north, the taxi charging zone is up to 96th Street. And so that combination of money, a billion and a half dollars in revenue a year, is going to be enough to bond 20 to 25 billion dollars in mass transit investment, most of which is going to be allocated -- or should be, and I hope, will be — to modernizing the signal system in the subways so that we can run more trains per hour on the existing subway lines, cut down on hellish subway crowding, cut down on the unreliability of subways, and return them to the level of service that they had up until about eight or 10 years ago when the service reliability on the subways began to crater.

CURWOOD: So I imagine somebody living, say, in New Jersey, is looking at this and saying, "Oh, no." And what do you say to them?

KOMANOFF: Well, Steve, funny you should mention New Jersey, because the Lincoln and Holland tunnels that go from New Jersey under the Hudson River, into these southern and central parts of Manhattan are unlikely to be charged additionally under this new congestion pricing plan, because they already pay a hefty toll. But if you drive east on the George Washington Bridge, which, as you know, comes into northern Manhattan, well, you'll continue to pay that toll. But if you then continue south and cross 60th Street in Manhattan, then your trip is going to be charged the same as any other trip crossing 60th Street, whether it's coming from Scarsdale, or Yonkers, or the Bronx or New England or Canada; and ditto, by the way, for trips coming from geographic Long Island, from Queens and Brooklyn that are going to be crossing into Manhattan on any of the four East River bridges that are now free. And what we say to people who are going to be forking over an additional $12 or so to drive into the Manhattan central business district, because that's probably about what the toll is going to be set at, is, Yeah, that's a hefty charge. But you will get several things from it, even you the driver. You're going to get a faster commute, because there will be somewhat fewer other drivers on the road. The idea is to set the congestion charge at a level that will dissuade about 15% of the trips from taking place. And the travel speed improvements from just getting rid of 15% of the trips are more than proportional. You will also be getting better transit alternatives so that if you want to take a train or a bus, those alternatives are going to be more reliable and more frequent and more comfortable and faster. And finally, there will be even fewer trips kind of down the road as the congestion revenues get invested in better mass transit, because even if you're committed to your car 365 days a year, not everybody else on the road is going to be committed, and some people are going to hop off the roads and get onto those transit alternatives. So, I'm not going to say that everybody is going to come out ahead of the game, but some drivers will. And the vast majority of trips into the central business district that are done by train and bus, they're going to be more humane, more efficient, more reliable, and more people are going to want to do them.

CURWOOD: Talk to me about how many commuter hours per day your spreadsheet indicates that people will be able to save.

KOMANOFF: Well, about half a million hours per day. Now that's a kind of abstract number, maybe more to the point is that when you total up all of the benefits of a robust congestion pricing plan, which include mostly the time savings, but also, more people are going to bike and walk which means they'll be healthier, the air will be cleaner, people will live longer, fewer visits to the ER for asthma and heart attacks, fewer people being killed and injured by cars, you know, less carbon being spewed into the air -- on and on, the net benefits even after you deduct the new tolls, which people are going to be paying, come out to about three and a half to four billion dollars a year. So another way of putting it, is that every day we don't have congestion pricing, we are leaving on the table 10 million dollars' worth of benefits -- mostly time savings for New York City commuters and travelers and residents. And I can't wait till January 1, 2021, when the system starts and we begin to reap those huge benefits.

CURWOOD: Now, what about the idea of giving, say electric vehicles a break, or handicapped people a break?

KOMANOFF: Well, those are two really different questions. People with disabilities should get some sort of exemption; the legislation requires that this six-person panel come up with a way to discount their tolls. And you know, maybe it shouldn't be a total exemption, maybe it should be reduced down to the cost of a subway fare. But of course, there needs to be accommodations for people with genuine disabilities. But electric vehicles: uh-uh. We need to hold the line and have EVs pay the same congestion charge. Because the main harm, or social externality cost, of driving in the crowded, teeming heart of New York City isn't what comes or doesn't come out of the tailpipe. It's the physical presence of that vehicle that slows everybody else down. And this is a congestion plan; it's not really an environmental plan. And we can talk about the larger environmental benefits of congestion pricing. But it's not so much because of tailpipes being cleaned up or removed. It's because cities, starting with New York, are going to be able to work better, and we need cities to drive the Green New Deal, the climate transition to a sustainable U.S. and sustainable planet. 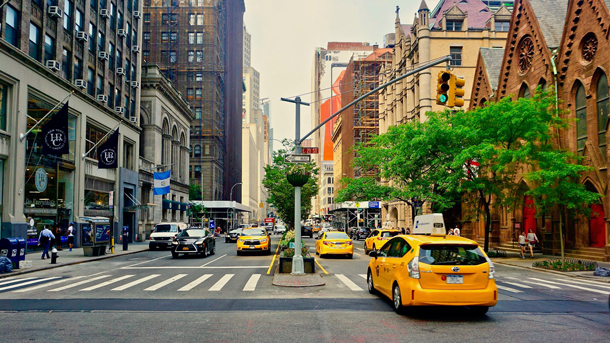 CURWOOD: You know, Charlie, you look back in history, and — cities were invented before automobiles. What does that mean, in terms of the response now to, hey, let's start to limit them with something like congestion pricing?

KOMANOFF: Yeah, exactly. Steve, you know, in the 20th century, we had 50 years of accommodating the automobile and nothing else, because the automobile allows no countervailing force. And then we had another 50 years, you know, from the 1950s, into the early part of this century, where people tried to rise up against that, and all that they were able to do was to slow the continued takeover of the city by the automobile and maybe begin to put in a few beachheads of opposition, like bike lanes here and there. Congestion pricing really does begin to level the playing field. It not only charges drivers for the congestion that they impose on everybody else and on each other, but it signals, I think, a new era, where cars don't come first. They are part of a transportation ecosystem, they are not the only part of it. And they have to be consigned to something that doesn't dominate. And that's going to open the door to different ways of living in New York and other great cities that we can only dream about now.

CURWOOD: Charles Komanoff is a transport economist and environmental activist who directs the Carbon Tax Center in New York City. Thanks so much for taking the time with us today.

KOMANOFF: Steve, thank you very much.

The New York Times | “Confused About Congestion Pricing? Here’s What We Know”