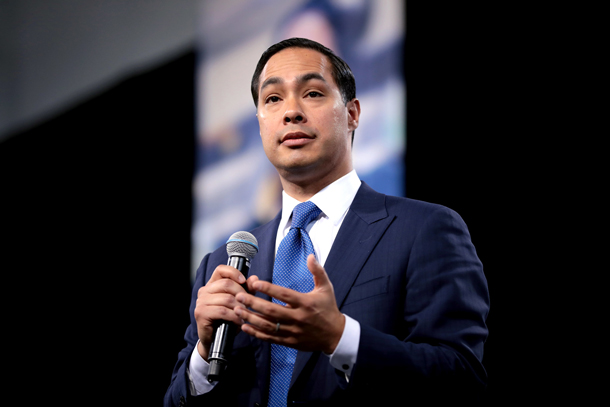 Former Secretary of Housing and Urban Development and San Antonio Mayor Julián Castro is running for president as a Democrat, and climate change is one of the key issues he’s talking about on the campaign trail. At a recent meet and greet at a coffee shop and bookstore in southern New Hampshire, he laid out his climate agenda and why a green economy can be a strong, job-creating economy. Host Steve Curwood reports on how voters are responding to Secy. Castro’s green focus.

In a season where the number of Democratic presidential wannabees is in the double digits, there is another double force emerging on the national political scene, the Castro brothers of San Antonio. Joaquin has been a member of Congress since 2013, but it’s his twin brother Julián who has the spotlight now. As mayor of San Antonio Julián was the youngest leader of an American city of more than a million before he was named, late in the Obama Administration, as Secretary of Housing and Urban Development. Now Julián Castro is looking to become the latest Texan and first Latinx and Hispanic president of the United States. In his search for votes in the New Hampshire primary he stopped by Crackskull’s Bookstore and Coffee House in Newmarket, New Hampshire, a homey and popular gathering place for progressives just down the road from the University of New Hampshire. But there were only one or two college students present among the two dozen or so mostly white and mostly older voters who greeted Julián Castro when he stepped through the door with a huge smile. 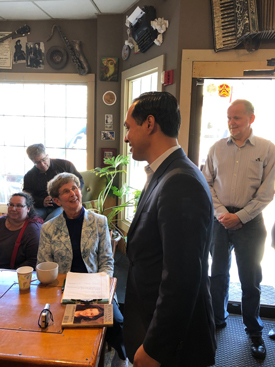 CASTRO: With the -- with one, with one exception: that I want to return integrity and decency to the Oval Office.

CASTRO: I got tested early on in my public service tenure. I went back home, I got a job at the biggest law firm after I graduated from law school. I went with my brother, by the way, I couldn't get rid of him.

CURWOOD: His brother Joaquin soon won a seat in the Texas legislature and Julián himself won a spot on the San Antonio City Council -- and an ethical challenge.

CASTRO: And a few months after I got elected the law firm got a client. The client had a deal that they wanted us on the city council to approve, because I was still working at the law firm.

The land deal was that they wanted to build a golf course over our water supply, because we rely on an aquifer for our water. And there were like one or two other golf courses that had been built years before in that area. But I had concerns that that environmental plan for this one was not nearly strong enough, and so that it might compromise the drinking water when they use all of the chemicals, the fertilizers, pesticides, everything else on a golf course, which has to be maintained in an intense way. So, I wanted to vote against this land deal, though, of the client of the firm, and my constituents want me to vote against it too. But under the professional rules of conduct for lawyers -- the lawyers in the room will appreciate this, probably like this in New Hampshire too -- you can't just go against the interests of a client.

And so, I was stuck. You know, my constituents, were saying, Hey, man, are you going to represent us here, you gonna vote against this? And, but my livelihood -- I had gotten, I had bought a house, I had bought a new car, my student loans were between $900 and $1,000 a month at that time -- my livelihood depended on me basically shutting up, and doing nothing. Just being conflicted out. So, one day in January of 2002, I walked into the law firm, and I quit my job. And then I went and I voted against that land deal on the city council.

And I tell you that because before I ever went into politics, I worried that I would somehow have to change who I was, in order to succeed. You know, you hear that politics can be dirty or corrupting, that you have to play this game with certain people that always seem to get their way.

CURWOOD: Every Democratic contender for president who comes to New Hampshire can count on getting asked about the environment, especially climate change, and a state representative from nearby Dover asked Secretary Castro to lay out his climate agenda. 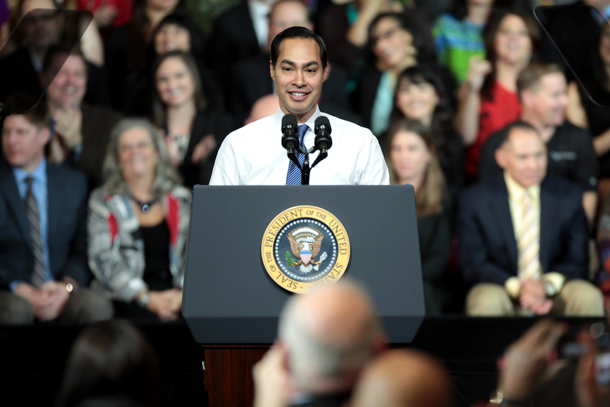 CASTRO: My first executive order would be to recommit the United States to the Paris Climate Accord.

CASTRO: But it really is, you know, I mean, that's the easy part. You know, the harder part is, I believe that we need to invest in a big way in sustainability. And, you know, I like the concept of the Green New Deal, for instance, because I don't think that we have to choose between protecting our planet and creating jobs and opportunity. In Texas, for instance, we have seen the benefits of the new energy economy, the solar energy industry, the wind energy industry. And so, I believe that we can do both of those things. I also have a track record on this; when I was the mayor of San Antonio, I served on the board of the local public utility, CPS Energy. When I got onto the board, you know, about 40% of our power generation was coming from two nuclear reactors in South Texas. And what was on the table at that time was, was a stake in developing two more nuclear reactors. This was in 2009. This was before Fukushima, right. And we found out at the last minute, right before we approved the deal, that the local utility had not told us that the cost was actually going to be two to four billion dollars higher than we knew. And so, I withdrew our support from that, and make changes on the board. And instead, we started moving the utility to invest in renewable energy. We did a deal for a 400-megawatt solar facility. But we didn't stop there. We also said, Look, if we're going to make that investment, then we want the jobs that come along with it, right, because you can have a whole bunch of solar panels in a field somewhere. But really, that's, that in and of itself is not that many jobs, right? So, we actually got the company that we struck a deal with to bring the whole manufacturing chain of those solar panels to San Antonio. So, they created 800 jobs in that area. That's the model that I would like the United States to work off of, there is no reason that China or any other country should beat the United States when it comes to actual jobs, as we embrace renewable energy, and we do the right thing. And I'm absolutely committed to making those investments and going towards zero on carbon emissions.

CURWOOD: A young man working as a barista in the coffee shop challenged Secretary Castro to see if the candidate was just talking the talk about climate protection or is willing to walk the walk when it comes to financing his campaign.

BARISTA: I like your statement about fossil fuels and how we need to go towards a more sustainable environment and like, like contribute to the infrastructure and like support jobs in the field, too. And I think something else that's really important that a lot of candidates have also got on board on is not accepting any money from fossil fuel companies. And I was wondering if you could promise to do that?

CASTRO: Yeah. In fact, I don't, not sure if we have or have done that yet. But yeah, we've agreed, basically, we're already practicing that. And so, at some point, I'm going to formally sign that pledge. I think something like 11 or 12 of the candidates have, which I've been glad to see. So, we are, from the very beginning, we've known, you know, beginning of the campaign about that pledge and had been careful trying to sort out like if a contribution comes in that doesn't meet that not accepting that. So, we will yeah, absolutely.

CURWOOD: And for the record, Julián Castro has said he will not accept any money from political action committees — PACs — contribution bundles that often promote special interests. As the candidate headed out for an appearance at another popular coffee hangout in nearby Dover, a couple of older gentlemen still sitting at a table gave me their impressions of Secretary Castro’s environmental platform. 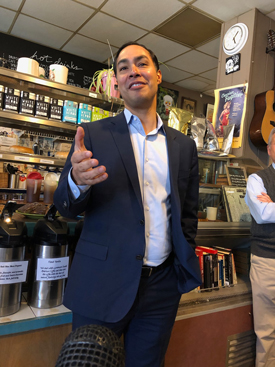 MAN: I thought he gave a very good answer. He, he's for for re-instituting our involvement in the Paris Accords and so forth. So, I think he's got good answers. I think his answers are well thought out. And, and intelligent answers. I like the things he had to say today.

CURWOOD: What's your top priority as an environmental voter?

MAN: Well, we are by all accounts facing, you know, a disastrous near-term future. If we don't, we don't get our act together, we're going to be past the point of no return. So, we've got to do something now, we have to have somebody who wants to acknowledge where we are, and we have to do. And the President is going in exactly the wrong direction.

CURWOOD: It’s still early in the Democratic presidential contest, and these New Hampshire voters seemed to like Julián Castro’s fresh face and his folksy rather than fiery style that speaks of integrity, and his brown, black and white campaign that reflects the diversity of today’s American electorate. So far Julián Castro has yet to raise as much money as some of the other contenders, but he does have enough donors and early polling results to qualify for the first televised debates in June, and that means he still has a chance for his campaign to catch on. And by the way, just to avoid confusion, his identical twin brother has grown a beard.

NewStatesmanAmerica | “Julian Castro Interview: “I have the experience and I can win against Donald Trump””