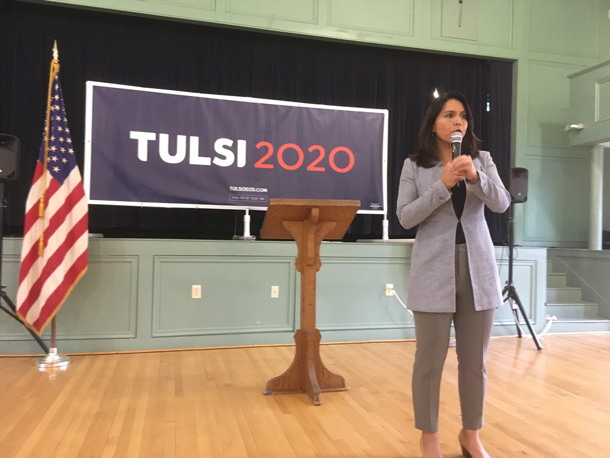 Representative Tulsi Gabbard (D-HI) is running as a Democratic candidate for President. At a recent hall meeting held in Exeter, New Hampshire, Congresswoman Gabbard spoke about the importance of addressing climate change and reducing military spending on trying to change regimes in other countries. Living on Earth’s Bobby Bascomb reports from New Hampshire.

With the New Hampshire first-in-the-nation presidential primary fast approaching, there’s a steady parade of the 20-candidate Democratic field passing through the Granite State. They include Congresswoman Tulsi Gabbard of Hawaii. At age 38 she has represented Hawaii’s second district since 2013, but she got her start in politics in the state legislature. Tulsi Gabbard was just 21 years old at the time, which made her one of the youngest female state representatives in US history. She left the state government to join the Hawaii Army National Guard and served two tours of duty in Iraq and Kuwait. Representative Gabbard recently campaigned in Exeter, New Hampshire, where Living on Earth’s Bobby Bascomb caught up with her.

BASCOMB: A crowd of about 100 people gather in the historic Exeter town hall, where Abraham Lincoln spoke back in 1860. The wooden seats are filled and a handful of people stand at the back of the room. As people wait for Tulsi, plastic flower leis are handed out by staff and volunteers, including Doug Brenner, who says he likes Tulsi’s environmental record.

BRENNER: She talks about how important it is for all of us to breathe clean air and to have clean water and she talks about environmental issues in a very bipartisan way because it’s not just one party or the other that wants clean air. It’s something that we all need.

BASCOMB: Indeed, the League of Conservation Voters gives Tulsi a 96% lifetime voting record, meaning LCV believes she has voted in favor of the environment 96% of the time.

BASCOMB: Tulsi is a lifelong vegetarian and a practicing Hindu, like her mother who is of German descent. Her father is American Samoan and Catholic. Many supporters, including Doug Brenner, say they are impressed by her military service and platform for peace.

BASCOMB: Congresswoman Gabbard talks for about 45 minutes, much about the need to scale back on military intervention abroad. She says there is a peace dividend to be had when we stop spending trillions of dollars on regime change wars. We should instead invest that money domestically on health care, infrastructure and the environment.

BASCOMB: As she closes, Tulsi brings her audience to its feet.

GABBARD: When we stand united we can bend that arc of history away from war and towards peace. This is what I’m asking you to join me in doing: revive that vision our founders had that our government is of, by and…

CROWD: For the people.

GABBARD: Let’s try that one more time. And…

CROWD: For the people!

GABBARD: Thank you all so much for being here. Aloha!

BASCOMB: After her speech I caught up with Ms. Gabbard to chat for a few minutes.

BASCOMB: You grew up in Hawaii, surfing, how did that inform your relationship with the environment?

GABBARD: Tremendously. You know, growing up as a kid, the ocean and the mountains was our playground. When I first learned how to swim, it was in the ocean and grew up surfing and just having a deep appreciation for, for our environment. You know, it wasn't something that had to be taught to me as you know, a political issue or here's something you have to do. It was something that was a part of our culture, growing up and just something that came naturally in saying, hey, this is our home, and we've got to do what we can to protect it. And it's what inspired me to run for the State House in Hawaii when I was 21 years old, my concern about these environmental issues and impacts. 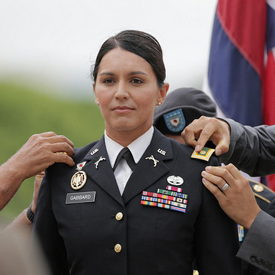 BASCOMB: What were you concerned about back then and what concerns you most about the environment today?

GABBARD: Unfortunately, they're very similar - water quality. The impact on our water, both on our oceans, but also back then we were dealing with issues like landfills being built over some of our largest aquifers, and threatening the very source of really beautiful water that we have to drink in Hawaii. And today, this is one of the main concerns that we continue to have that afflicts so many people in this country, I think more than many folks realize. You know, we heard about Flint, Michigan in the headlines for a little while. Unfortunately, they have been out of the headlines for a long time, but their water is still toxic, their water is still poisonous. Water is life, it is essential to everything else. If we don't have clean water to drink, then we'd have nothing.

BASCOMB: Back in 2016 as a person of native Samoan decent, Tulsi traveled to North Dakota along with thousands of Native Americans and other military veterans to join the Standing Rock Sioux in rejecting the Dakota Access Pipeline. Tulsi says her decision to join the Sioux tribe was in part motivated by her concern for water safety.

GABBARD: It's hard to describe in words, what it was like to go to Standing Rock to meet with the leaders of the Standing Rock Sioux Tribe, to see the unity amongst tribes that had come about because of this recognition that water is life and that unless we all stand together to protect our water from the very real threats that we face -- there it’s an oil pipeline, and in other places it's other things but unless we stand together, recognizing that a threat to our water in one place is a threat to our water everywhere, then then we are threatened and destined to perish.

I've kept in touch with the leaders of the tribes there. And the beautiful thing is that they have made a commitment to take all of their community, to take their reservation completely off of any dependence on fossil fuels, and be self-sufficient and reliant on their own green renewable energy economy. 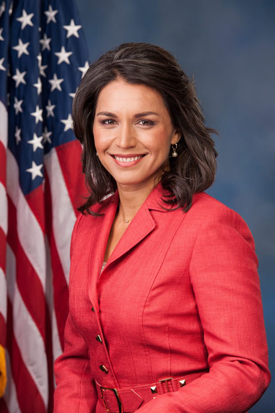 Tulsi Gabbard is a Democratic Congresswoman from Hawaii and a veteran of the Iraq war. (Photo: United States Congress, Wikimedia Commons, Public Domain)

BASCOMB: Representative Gabbard has not co-sponsored the Green New Deal resolution to tackle climate change. She’s concerned that the language of the resolution introduced is too vague. But, in 2017 she did introduce a measure that would eliminate tax breaks for fossil fuel companies and provide transitional support for workers in those industries, and its goal was for the US to generate 100% renewable energy by 2035.

GABBARD: We have to address the seriousness of this threat and stop treating it like a political football issue. And we can and must do so by recognizing that the effects of climate change are threatening people in communities all across the country, are threatening people everywhere, whether you're in a Republican state or a Democratic state. And in order to bring about the kind of big change that we need to see, we have to come together and unite towards making the big investments that we need to make -- to get off of fossil fuels, and invest in a green renewable energy economy, to invest in a workforce to work in that economy, to invest in sustainable infrastructure, to invest in sustainable agriculture, something that's not often talked about when we're dealing with climate change, but is one of the biggest contributors of carbon to our environment and to our atmosphere. And we have to be real about the fact that even as we must do all that we can here in this country, it still won't be enough, unless we build relationships based on cooperation rather than conflict with other countries that are big contributors to this threat, countries like China, for example. And while we have differences in certain areas, this is an issue that is a global crisis, and can only be addressed with global action.

BASCOMB: After our chat Tulsi shakes hands with New Hampshire voters. She greets nearly everyone with a handshake and a warm “aloha”. She says “aloha” means much more than just hello and goodbye. It’s an expression of love, kindness, and mutual respect, both for people and the land. Much like our first president from Hawaii, Barack Obama, Tulsi hopes that the spirit of aloha will carry her all the way to the White House.