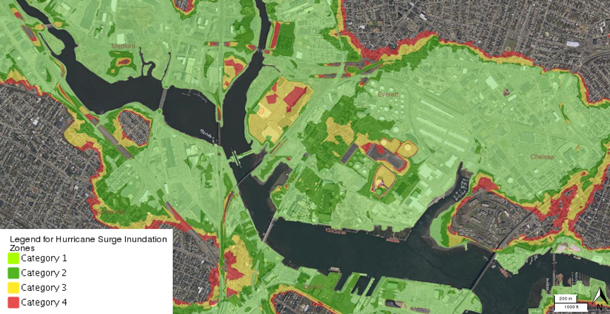 Sea level rise and intensifying storms are putting coastal homes and ecosystems at risk including the potential for disastrous industrial spills. That’s the basis of a lawsuit brought by the Conservation Law Foundation (CLF) against ExxonMobil, over the alleged vulnerabilities of the company’s Boston Harbor storage facility to climate disruption. A federal judge recently allowed the suit to go forward, and CLF President Brad Campbell talks with Host Steve Curwood about the risks of storm-induced spills that storage tanks pose to local communities and the fragile Boston harbor ecosystem.

ExxonMobil has another climate related lawsuit on its hands. Litigation alleging Exxon misled investors and the public about what it knew about the risks of climate change has been grinding on through the courts for years. And now a federal judge in Massachusetts is allowing a suit to go forward over climate risks related to ExxonMobil’s storage tanks near Boston Harbor. The Conservation Law Foundation alleges that the oil giant has failed to prepare an oil storage facility in Everett, Massachusetts against the stronger storms of climate disruption. Here to tell us more is Brad Campbell, the President of the Conservation Law Foundation. Welcome back to Living on Earth!

CAMPBELL: Thanks for having me.

CURWOOD: So, talk to me about this ExxonMobil oil storage facility there in Boston. Where is it? And why are you concerned about the risks that that facility could pose to the community during an extreme weather event?

CAMPBELL: ExxonMobil has a large bulk terminal where they receive petrochemical products -- oil and other products. It's nestled right in the heart of a densely populated community. And it sits on a tributary to Boston harbor, which the public in the Commonwealth of Massachusetts has spent literally billions of dollars to clean up, after a lawsuit that the Conservation Law Foundation initiated. So there's much at risk, both in terms of public safety, public health, public investment; and of course, the environment, if that facility were to be inundated, and that inundation were to lead to a catastrophic spill.

CURWOOD: So it's on a tributary; folks who know Boston would say it's on the Mystic River. How vulnerable is that spot, exactly, to sea level rise -- what kind of storm could bring a storm surge to this facility?

CAMPBELL: Every projection of a Category 1 storm puts this facility under water, fully inundated. And we've seen in Harvey, we've seen in Irene, we've seen in Sandy, that these are the types of tanks that collapse readily when there is an inundation of that nature. But there's a separate set of climate risks this facility is not addressing. And that's, that's the risk that we're seeing in the day to day now, with New England having a more than 70% increase in intense rains, where you get two or more inches of rain very intensely in less than 24 hours. This is a facility where, because it's been in industrial use for over a century, every drop of water that hits the ground has to be treated to remove very potent toxics, including a number of carcinogens. That rain pattern, that new rain pattern we have as a result of climate change, is overwhelming the treatment plant at this facility. And as a result, day in day out when these rains come, this plant is violating its Clean Water Act permit with major exceedances, in some cases, thousands of times their permitted level, of very potent toxics going into the Mystic River system.

CURWOOD: Now what specifically are these toxic chemicals? What are some of these oil products that ExxonMobil stores there; and talk to me, why they're dangerous?

CAMPBELL: Well, it's really a toxic stew that has to do not just with the oil that's stored there, but with the essentially century of use of this facility for various petrochemical products and hazardous substances. So some of them are very common things folks are familiar with: PAHs, polycyclic aromatic hydrocarbons; benzene and toluene; xylene and so forth. But then there's also a more exotic set of very potent carcinogens that are showing up in the discharge monitoring reports that Exxon itself is self-reporting and that show very serious and very frequent violations of their Clean Water Act permit.

CURWOOD: So your lawsuit is at that typical stage in many lawsuits, just trying to get the right to have the lawsuit proceed to have a trial. But let's say that you get over that hurdle, there's a trial, and the court says, You're right, Conservation Law Foundation, this facility is, is not protecting the public in the way that it should. What's the remedy that you would like to have? 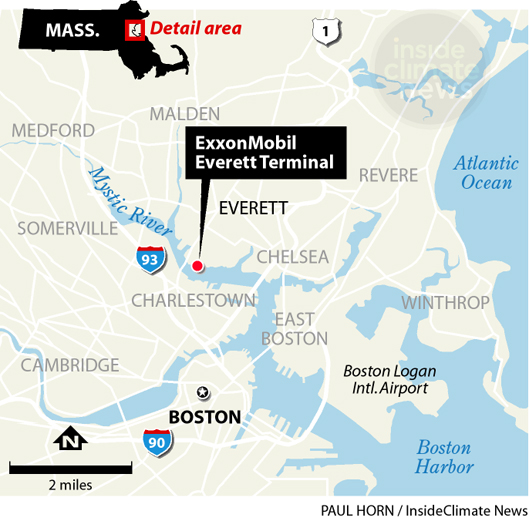 The ExxonMobil facility is situated right on the Mystic River, which joins the Charles River to form inner Boston Harbor. (Image: Courtesy of Paul Horn and InsideClimate News)

CAMPBELL: I think there are a number of remedies that have to be part of the solution here. One is that just as a matter of deterrence and example for other facilities, Exxon should have to pay civil penalties to the US Treasury for the hundreds of violations over hundreds and hundreds of days that have occurred at this facility that are alleged in our complaint. Secondly, they have to ensure that as we are now in this pattern of more intense rains, the improvements to their facility operation, mostly fixing their or upgrading their stormwater treatment system so that toxics are not washing off their facility directly into the harbor ecosystem. That's a second element of any remedy for this facility. And the third, of course, is implementing those safeguards, those protections that are needed from an engineering perspective to ensure that either the facility isn't inundated in the case of extreme weather that we know is imminent, or that if it is inundated, the tanks and the pipes and so forth are protected or designed in a way that they are essentially climate-ready.

CURWOOD: It would seem that protecting its facilities against the shift in climate would be in ExxonMobil's own interest. You're in court with them because you don't think they're prepared; why do you think they're not prepared?

CAMPBELL: Well, the sad fact is that it's in the public interest for them to harden this facility; in terms of their short term economic interests, which seems with Exxon to be paramount, you know, they're saving the costs of improving the treatment system, they're saving the costs of protecting the tanks from inundation. And in the event of a catastrophic spill, yes, Exxon will bear some costs. But the public will also be bearing a heavy cost. The families and businesses that will have oil and toxics flowing through their basements and into their homes, they will be bearing a cost. The taxpayers of the region, who paid billions to clean up Boston harbor, which is now a jewel of economic and urban rebirth here in Boston, they will suffer a terrible cost. Not all of those costs will fall on Exxon, and that's why it's important that we have statutes like the federal Clean Water Act. They require Exxon and other facilities like the one Exxon has in Everett to use best engineering practice. And best engineering practice means you look not just at what's happened in the past, but what the science tells you is already here in terms of the more intense rains, and that lies just ahead in terms of more intense extreme weather events coupled with rising seas.

CURWOOD: Brad Campbell is the President of the Conservation Law Foundation in Boston. Thanks so much for taking the time with us today.

CURWOOD: An Exxon representative says if the case had merit the EPA would be acting on it. But when we contacted the EPA a representative declined to comment on ongoing litigation.

Read more about the Conservation Law Foundation lawsuit against ExxonMobil

The text of the CLF lawsuit filed against ExxonMobil