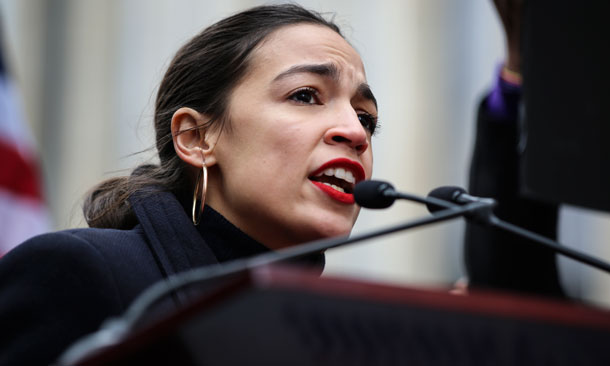 Alexandria Ocasio-Cortez has introduced a resolution for a Green New Deal, an environmentally-focused equivalent of the economy-boosting New Deal that President Franklin D. Roosevelt put into effect during the Great Depression. (Photo: Dimitri Rodriguez, Flickr, CC BY 2.0)

Congresswoman Alexandria Ocasio-Cortez (D-NY) and Senator Ed Markey (D-MA) have released their outline for a Green New Deal, a piece of legislation intended to boost the economy while reducing greenhouse gases. Nathaniel Keohane, Senior Vice President for the Environmental Defense Fund, joins Host Bobby Bascomb to explore the Green New Deal draft and where the movement goes from here.

In 1933 President Roosevelt enacted a massive government response to the Great Depression. The New Deal was a series of work programs and regulation reforms, that helped drag the United States out of the worst economic crisis in our nation’s history. Now congresswoman Alexandria Ocasio-Cortez, and Senator Ed Markey have released The Green New Deal in response to a crisis of a different kind – climate change. The resolution is an outline that seeks to create jobs while simultaneously reducing our biggest sources of greenhouse gas emissions. It’s an ambitious plan to make buildings more energy-efficient, build a high speed rail system, and reform agricultural production. It also calls for meeting 100% of our energy needs with zero carbon sources by 2030. Joining me to explain is Nathaniel Keohane. He’s Senior Vice President at the Environmental Defense Fund and says the goals of the Green New Deal are really two fold.

KEOHANE: Well, when I look at the Green New Deal resolution, I see two goals that really stand out. And one is having a longer term goal of getting to net zero emissions, hundred percent clean, across the entire economy, which I think if we look at the science, the science tells us that needs to be done by 2050. And as part of that, there's the more specific and immediate goal of getting to 100% clean in the power sector by 2030. I think those are both big and ambitious goals, and exactly the kind of goals we need. I think the power sector goal; that's achievable if we put the kind of investment in the kind of policies in place to meet it, and we need to make sure that we are drawing on every technology we can that’s going to get us there. 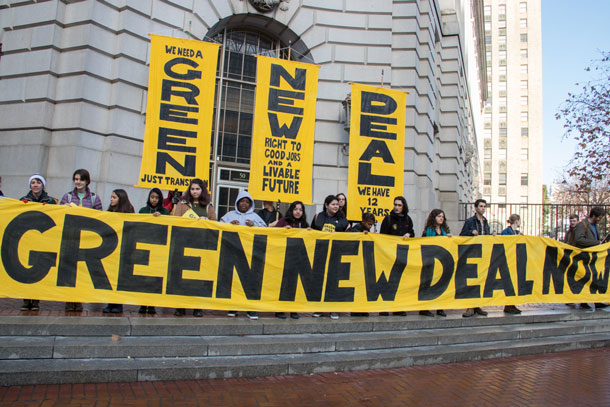 The Green New Deal is designed to revitalize the US economy through the creation of jobs and a movement away from fossil fuel industries. (Photo: Peg Hunter, Flickr, CC BY-NC 2.0)

BASCOMB: Do you think it's feasible then? Or is it sort of setting a very, very high goal with the hope that maybe you’ll get somewhere in the middle?

KEOHANE: I think that's a question that really depends on political will. It's certainly technologically feasible. But can we mobilize the political will not only in Congress, but in the States, and among all of us citizens, and among corporations, and so on, to make the investments to put the policies in place to make this switch? So that's what I think will determine whether it's feasible.

BASCOMB: Well, much like the original New Deal put forth by FDR, the Green New Deal hopes to create jobs with this, and there's a whole lot of social components to it. But how many jobs are there currently in renewable energy or carbon zero energy? And what do you think is the potential in the future for that, if we take this approach?

KEOHANE: We're already at a point where there are more “green jobs”, so to speak, in electric power. There are more jobs in renewable energy, and wind, and solar energy right now, than in fossil fuels. And in terms of electric generation. No discussion about economic prosperity is complete without thinking about the costs that we're paying right now of inaction. And so we have to recognize there is no high-carbon path to economic prosperity, because on our current course, the world we’ll see in the coming decades is not one that is a world of prosperity. It's one that is a world of increasing climate damages, and all that brings with it. So, if we're thinking about economic prosperity, jobs, growth, and inclusive growth, I think the climate agenda and that economic agenda are one and the same.

BASCOMB: Now, to what extent do you see the Green New Deal as having a place in the 2020 election?

KEOHANE: Well, I think you're already seeing many of the candidates, on the Democratic side at least, talk about it. And I think the fact that this has put climate at the top tier of issues that presidential candidates have to talk about; that is terrific, right? That is a terrific development. For many years, we've heard that people say climate is important issue, they care about it, you know, increasing numbers, think we need to do something about it, they're worried about it, but it hasn't risen to the top tier issue. Now, for the first time, we're starting to see it rise to that level. That's true in polling data. And I think that's also then true in terms of framing the political debate, as people see extreme weather events, as they see the impacts of climate change, they are connecting the dots, and they're making this a higher priority. And I think that's part of what we're seeing in the political debate as well.

BASCOMB: House Speaker Nancy Pelosi has basically indicated that she won’t introduce this resolution to the House floor. If the Green New Deal doesn't get any traction right now, what do you see as the most likely future for this plan?

KEOHANE: Where I see this, is we need as many ideas, as many proposals, from as many different voices, to be in this debate, and to be elevating the debate and adding energy to the debate and adding the chorus that says, this is a top tier issue for the country, that we need to solve for our sake, for our children sake, for our grandchildren sake, for this of the future prosperity and leadership of America. And so I'm less concerned, I guess, with where any one proposal or resolution or, or even, you know, legislative bill at this point ends up as we move forward. I think we need to be taking all the ideas we can and bringing them together in a way that can meet the level of urgency and ambition that the Green New Deal resolution so clearly articulates and meet that in a way that is durable, that achieves broad support in Congress, so that we have those policies not just for a year or two years, but they stand the test of time. We need long-term deep structural policies, as well as government investment and all the rest. And so, to do that, we're going to need to get ideas from as widely as we can on the political spectrum, and then put them together in something that can pass the Congress with a durable political support. 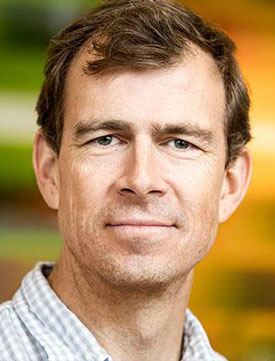 BASCOMB: Well, there's a lot in here. I mean, there's a lot of different proposals, they're looking at energy efficiency in buildings, and transportation, and agriculture. But, of everything you've read, in the Green New Deal, what do you think is the most promising or maybe could put the biggest dent into this problem that we have?

KEOHANE: I think about this a little bit differently than the way it's laid out in the Green New Deal. And here's what I mean by that. I think we need to set our eyes on the most ambitious goals we can meet. The 14 areas that the Green New Deal identifies: transport, agriculture, landowners, power sector, industry, energy efficiency, those are all going to be part of the solution. But the way I look at it is; what we really need to do, from a policy point of view, is create the broad based systematic incentives that mobilize everybody in the economy to be finding solutions that reward everybody in the economy - businesses, entrepreneurs, innovators, individuals - to find the ways they're going to cut climate pollution and reward them for figuring out better and cheaper and faster ways of doing it and taking it out of the sky. That’s the way that we're going to get as fast and far as we can, and that we're going to mobilize the whole economy to do it. There is a critical role for government in setting those policies out. What we need to do is put in place the broad based incentives that will mobilize the entire economy and all the American people into finding those solutions.

BASCOMB: Nathaniel Keohane is Senior Vice President at the Environmental Defense Fund. Nat, thanks so much for taking the time with me.

KEOHANE: Thanks very much for having me on.

BASCOMB: Senate majority leader Mitch McConnell has said he will soon call a vote on the Green New Deal. It’s not expected to pass in the Republican controlled Senate and will force a vote from Democrats who have not yet voiced an opinion on the resolution.