Rules To Save The Climate 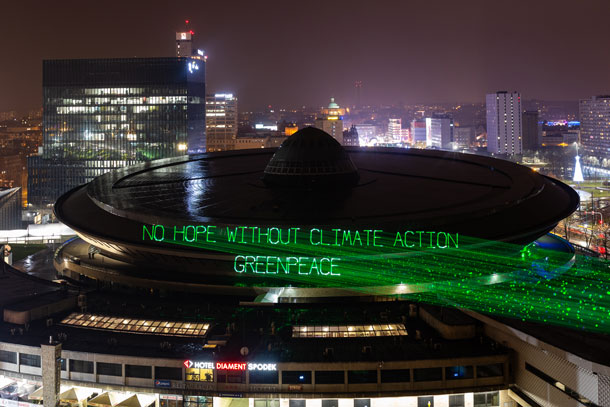 Greenpeace activists project the words “No hope without climate action” on the roof of the COP24 conference venue in Katowice, Poland. (Photo: Greenpeace Polska, CC BY-ND 2.0)

UPDATE: Rules for reporting climate protection progress were adopted at the 24th Conference of the Parties (COP24) in Katowice, Poland, as almost all 190-plus countries in the climate treaty called for stronger international commitments on climate action. While many countries called for rapid climate action, a contingent including the United States downplayed new scientific research and touted the benefits of coal. From Poland Alden Meyer of the Union of Concerned Scientists detailed for Host Steve Curwood how delegations responded to the challenges. COP25 will be in Chile.

Delegates from nearly 200 nations recently gathered in Katowice, Poland to move forward the Paris Climate Agreement. And as the session opened Fiji Prime Minister Frank Bainimarama cited the warning from IPCC scientists that without rapid action the Earth’s temperature will increase more than 1.5 degrees Celsius, with even more dire consequences the warmer it gets.

BAINIMARAMA: As the scientists have just told us, the window of opportunity to act is closing very fast time is running out. And we must move quickly to have any hope of capping global warming at 1.5 degrees Celsius above the pre-Industrial Age. Act now with courage and resolve, or God forbid, ignore the irrefutable evidence and become the generation that betrayed humanity and our responsibility to future generations.

CURWOOD: As we go to air it was unclear how and when countries will account for meeting the individual goals they set for themselves back in 2015, and we will update the final results of the COP24 meeting on our website, loe.org. But at the moment, of more than 190 countries only two nations report they are on target to meet their share of the Paris climate goals. Alden Meyer of the Union of Concerned Scientists is in Poland and joins us now. Welcome back to Living on Earth, Alden!

CURWOOD: How would you characterize the mood of this Conference of the Parties compared to ones you've attended in the past?

MEYER: Well, it's workman-like; they're trying to get the rules to implement the Paris Agreement, everything from what kind of information countries have to put forward when they submit their national pledges under the Paris Agreement, how you track and report on how well you're doing on those, what kind of market mechanisms they should set up to let countries cooperate. Tricky areas like land use, forestry and agriculture; just a whole series of issues, they have to address really setting up the guts of the Paris Agreement and how it's going to operate going forwards.

CURWOOD: So when countries showed up in Katowice, how were they doing in terms of meeting the targets that they had set themselves individually, three years ago after Paris?

MEYER: Well, the latest analysis by the United Nations Environment Program that was released just last month says that basically, we're only about a third of the way to the reductions between business as usual levels, and where we need to be in 2030 to have a chance of staying under two degrees, which is the less ambitious of the temperature goals set in Paris. It said we should shoot to stay well below two degrees Celsius and aim for 1.5 degrees. Just for comparison, we are now at about one degree Celsius increase over pre-industrial temperature limits. So we have a lot more work to do. 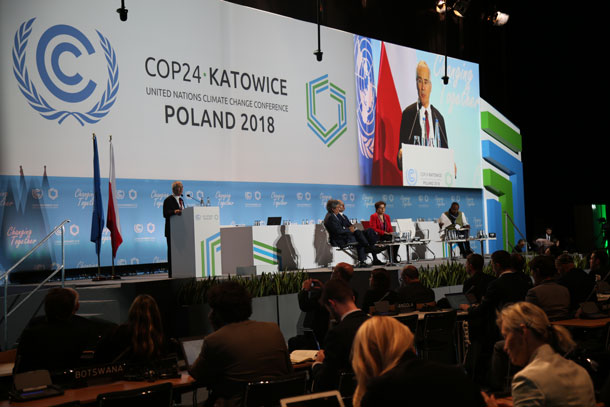 CURWOOD: So with the United States pull back from the climate negotiation process, how was our delegation, folks associated with the Trump administration, how were they treated there in Katowice?

MEYER: Well, they haven't pulled back entirely, they're still a party to the Paris Agreement until they're actually able to formally pull out one day after the 2020 Presidential election, as it turns out. So they’re still participating actively in the rule book negotiations. Of course, they have pulled back on climate finance, cutting $2 billion out of the $3 billion dollar pledge to the Green Climate Fund that President Obama put forward.And of course, everyone is aware that President Trump and his team are actively seeking to dismantle virtually every aspect of domestic climate action. And so I think the negotiators are negotiating with one hand tied behind their back because they're not seen as leaders on climate ambition and climate finance the way they were during the Obama years. And yet, there's this sense that everyone wants to maintain the ability for the United States to come back in to Paris after President Trump leaves office. And that's what gives the negotiating team here for the US a little bit of leverage, is that people are hopeful that the US will eventually come back into Paris, if President Trump does indeed pull us out just before his first term ends.

CURWOOD: Katowice, Poland is at the heart of Poland's coal country. And the United States made a presentation during this conference on the US view of coal that we need to use more of it and it's really important. How was that received?

MEYER: Well, this is sort of a repeat of what they did last year, at the Conference of the Parties in Bonn, Germany, they hosted a side event with a number of panelists addressing coal as well as advanced nuclear. And their argument was that the world is using fossil fuels, and so we ought to deploy slightly cleaner coal technology that doesn't use quite as much coal per unit of electricity, and that would be better for the planet. But as the IPCC report made crystal clear, if you want to get anywhere near the temperature goals that countries agreed to three years ago in Paris, you have to virtually phase out use of coal by mid century unless you can develop carbon capture and storage technology and make that economic. So it was kind of viewed as a bit of a sideshow, a distraction. One delegate told me it was like a tobacco company setting up a booth and handing out free cigarettes at a cancer doctors’ convention. So it didn't go over too well with a number of countries. It was protested by global youth from around the world who occupied the space at the beginning, did a protest and then walked out about 15 minutes into the event.

CURWOOD: What still needs to be decided at this COP?

MEYER: Well, they have to make the final decisions on just about everything. They have been discussing the individual elements of the Paris rule book, but they have yet to bring those together at the ministerial level into an overall political package, so the countries can decide if there's enough in there for them. They have to decide what to put in the final decision in terms of the IPCC report, how to characterize that, what expectations there are on countries to take action by 2020 to revise their existing commitments under Paris. Basically, a lot of it is wide open. There's a few small things on adaptation and technology where they've reached a consensus and not too much heavy lifting there. But on the major issues they really haven't yet made, the political compromises that are going to be needed to reach a final agreement. Those are going to have to happen in the coming days.

CURWOOD: Shortly before this meeting began, it was understood that Brazil would host the next one. But I gather, they've backed out; why, and what does that mean for the process?

MEYER: Well, they said they backed out because the financial cost; hosting one of these Conference of the Parties can cost 80 to 100 million dollars for the host country. And they said it was a fiscal measure, but people suspected may have been related to the incoming president who takes office in January, President Bolsonaro, who is much more a climate skeptic about the science and has said that he wants to cut back on enforcement of laws and policies designed to reduce deforestation in the Amazon. So there's a bit of a sense that the real reason for this is that Brazil wasn't interested in being such a climate champion as they might have been in past years. The Latin American region is now discussing which country will get the bid to host the conference next year. It looks like the front-runners at this point, are Chile and Costa Rica. And they will have to make a decision on this by the end of this meeting so it can be formally accepted by the full Conference of the Parties.

CURWOOD: So Alden you've been going to these for a long time, first Conference of the Parties, 1995 in Berlin; original deal back in 1992 set up in Rio de Janeiro. How are you feeling about the process now? 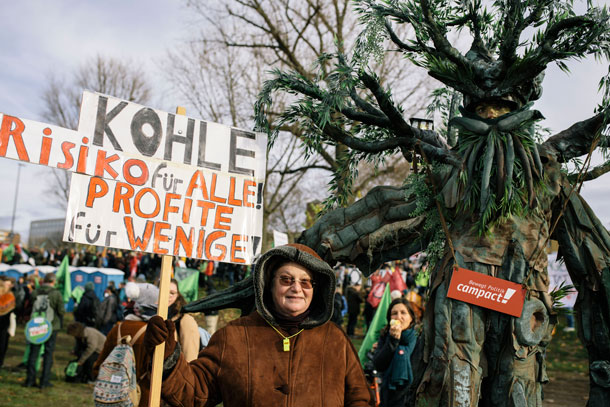 MEYER: Well, I'm feeling good about the action that the Paris Agreement has spurred around the world, if you look at the cities, the businesses, the states and provinces, a number of countries that are making pretty transformational commitments, whether it's to get 100% of their electricity from renewable energy or trying to get to net zero emissions. But the reality is that we haven't done enough, emission trends continue to go upwards. The problem as you well know, Steve, is that we're running out of time, we don't have a lot more time and we're not keeping up with the physics in the atmosphere. And the problem is mounting. So it's a bit of a yin and yang I guess you'd say, there some indications of hope and progress and some areas that are raising concern, and on balance we're clearly not doing enough.

CURWOOD: Alden Meyer is Director of Strategy and Policy for the Union of Concerned Scientists. Thanks so much for taking the time with us today Alden, it's always a pleasure.

MEYER: Great Steve, I've enjoyed being with you.
UPDATE: A deal was finally struck regarding rules for the Paris Climate Agreement after marathon negotiations. COP25 will be in Chile in November of 2019.


John Kerry: "Forget Trump. We All Must Act on Climate Change." The Paris Climate Agreement co-creator and former US Secretary of State speaks out

A statement from Alden Meyer about efforts to downplay IPCC Report