The Climate For Wildfires 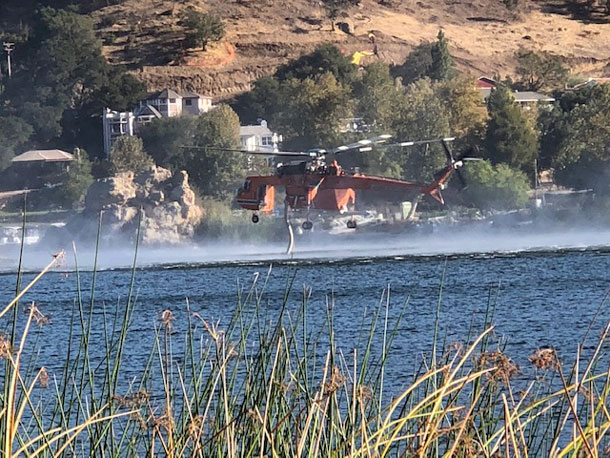 The cost of fighting fires continues to increase as the wildfire season in California has become year-round, largely thanks to climate disruption. (Photo: Glen MacDonald, one time, non-exclusive)

California’s 2018 wildfire season is one of the most destructive on record, with the Camp and Woolsey Fires engulfing hundreds of thousands of acres of land in a matter of hours and claiming a record number of lives. Mega-fires are becoming increasingly common in California, and climate change is a leading factor. Climate change expert and UCLA geography professor Glen MacDonald joins Host Bobby Bascomb to talk about what these fires mean for Californians’ future.

BASCOMB: From PRI and the Jennifer and Ted Stanley studios at the University of Massachusetts Boston, this is Living on Earth. I’m Bobby Bascomb, in for Steve Curwood.

The 2018 California wildfire season is shaping up to be one of the most destructive on record. More than 7,500 fires burned nearly 2 million acres of land so far this year. That’s the most land burned in a single year since records have been kept. And the Camp Fire in Paradise, California is the deadliest in the state’s history. Here to talk about California’s tragic fire season and why fires are likely to get worse with a changing climate is Glen MacDonald, Director of the White Mountain Research Center and Professor of Geography at UCLA. Professor MacDonald, welcome to Living on Earth!

MACDONALD: Well, it's my pleasure to be with you today.

BASCOMB: So, California is in the midst of another just disastrous fire season. Is this just something that you accept as part of living in California?

MACDONALD: Well, this is it. We're into a 365-day-a-year fire season. They're putting out fires, especially in Southern California throughout the year. And we've had some pretty good fires that come up now in December and January, February, and they start off very early in the spring.

BASCOMB: How are these fires different from a more typical California wildfire, if at all?

MACDONALD: Well, it's hard to say what the typical California wildfire is because we have all these different ecosystems and they all have different fire characteristics. What's different, of the 20 largest wildfires, about 15 of them have occurred since the year 2000. The resources we use for fighting fires have increased and become more and more sophisticated. And yet we continue to break records with the size of fires or the expense of fires. Why is that? Well, one of the reasons is that we've also seen temperatures going up over the 21st century. And so as temperatures go up, that spring fire season starts earlier, that winter fire season goes later, and the fuels become drier and drier during the summer period. 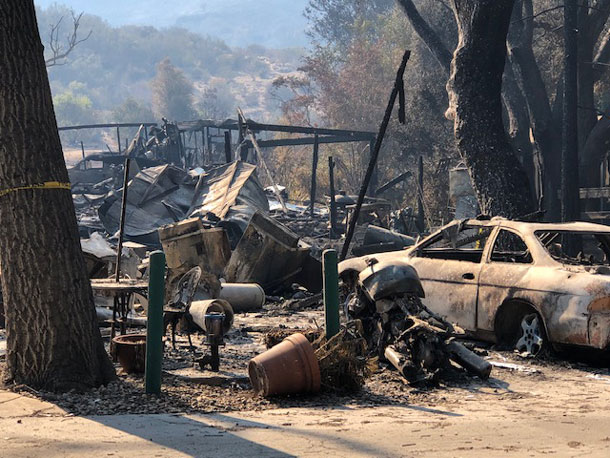 The Woolsey Fire has been burning in Southern California since November 8th, 2018. It has resulted in the destruction of hundreds of structures and forced the evacuation of hundreds of thousands of people. (Photo: Glen MacDonald, one time, non-exclusive)

BASCOMB: Los Angeles Fire Chief Daryl Osby was quoted saying that climate change is making his job more difficult just because of the sheer number of fires. That means that there are fewer resources to go around. So, they already have their hands full fighting fires in other parts of California. Does that ring true to you?

MACDONALD: Yeah, I know, this is absolutely true. I mean, just look at our current situation right now. We have, of course, the Woolsey fire down here. And then we have the Camp fire up north of Sacramento. These are both massive fires. I mean, the camp fire is the most deadly that we have in recorded history. And so, they're facing a huge fire up there. They're facing a huge fire here. And you could imagine then resources are stretched. We get a lot of help from the neighboring states when this happens, and we're so thankful to our neighbors for doing that.

BASCOMB: Well, President Trump recently made a statement saying that the wildfires resulted from gross mismanagement of the forest, and he threatened to withhold federal funding for California as a result. What do you make of that statement?

MACDONALD: Well, I react exactly as the firefighting leadership has reacted here in the state, which is a combination of dismay and disappointment at comments that were ill informed and were insensitive. They're ill informed, because, for instance, the fire down here has nothing to do with forest management. We're not burning trees down here. They are shrubs, they'll regrow. The fuel will be back in a matter of five to 10 years. So, there's no science behind that comment in this particular instance, whatsoever. And it's disheartening to hear our national leadership instead of standing by the state and offering comfort to a large part of the country which is really suffering, to take a cheap political shot at a state which doesn't always break his way in terms of elections. I think the general public as well are really, really disheartened by that.

BASCOMB: So, some famous people actually lost their homes in the Woolsey fire near Malibu, including Neil Young and Miley Cyrus. And I've read that people that did all the right things, you know, even those people lost their homes. So, if you're looking at a situation where people with all the resources in the world and people that are doing all the right things, they're still losing their homes to these fires, I mean, what can people do anymore? 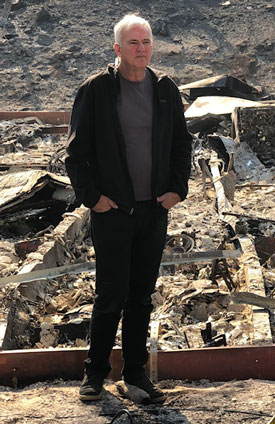 Glen MacDonald directs the White Mountain Research Center and is a Professor at the University of California, Los Angeles. Here he stands in the ruins of one of the structures engulfed by the Woolsey fire. (Photo: Alex MacDonald, one time, non-exclusive)

MACDONALD: I think we do learn a lot from each fire and we look at what, you know, what's happened, and right now, in many of these jurisdictions, you can't put a wood roof on your house, it has to be a fire resistant roof. Many jurisdictions also have defensible perimeter loss, which mean that sometime in the spring, you have to go and clear away flammable shrubs and grasses from around your structures. We learned that and now if you don't do it, the government will do it, and they'll charge you for it. You know, there are lessons we're going to learn, and hopefully that will then be incorporated into building codes and in our planning.

BASCOMB: California Governor Jerry Brown has said that this level of fire activity is the new abnormal for his state. What do you make of that statement?

MACDONALD: Well, you know, I used to be one of the people who would use that term, the new normal and all of that, but I think that's misleading. It makes it seem that, well, this is the way it's going to be. But the fact is, according to all the various climate models and linked fire climate models, this is not the way it's going to be. It's going to be worse by the time we get to 2100. So I think we have to understand that right now, the train is not in the station, it's moving and it's moving to a place we don't want to go.

BASCOMB: I mean, how do you, how do you prepare for that, you know, you already have the best technology available today, as you said. If even that's not enough, and you're looking at a future that's hotter, drier, more fires… is California still livable?

MACDONALD: Well, I mean, it will be livable, I think there are things that we can do in terms of how we manage our yards, our landscaping, the materials we use for our homes. It seems very intrusive for the government to tell you what you can and can't plant in your garden, but that can make all the difference in the world to your house surviving, your neighbor's house surviving. And we're not going to exclude these fires from the landscape. First of all, that would not be possible, and secondly, for many of the vegetation types, fires are a normal part of the ecosystem process. But there are things I think we can do to further decrease our vulnerability. I’m not saying they're cheap, and I'm not saying that people are going to like it, but I think we have to really look at that hard now.

BASCOMB: Glen MacDonald is director of the White Mountain Research Center and Professor of Geography at UCLA. Thank you so much for taking the time to talk with me.

MACDONALD: It's been my pleasure. Thank you for speaking with me.