UPS, originally founded as a bicycle delivery service in Seattle in 1907, is returning to its roots by introducing an electric bike delivery system. The pilot program is scheduled to take place in Seattle in November 2018. (Photo: Ryan McKnight, Flickr, CC BY 2.0)

Peter Dykstra and Host Steve Curwood discuss the UPS company’s new electric bike delivery system before they examine China’s decision to reverse a ban on the trade of rhinoceros horn and tiger bone. Later, they venture back in time to 1995, when a mass migration of waterfowl closed airports in some prairie states of the US.

CURWOOD: It’s Living on Earth. I’m Steve Curwood. Time now for a look beyond the headlines with our intrepid scout Peter Dykstra. Peter is an editor with Environmental Health News, that’s EHN.org and DailyClimate.org. He’s on the line from Atlanta – hey Peter, what do you have for us today?

CURWOOD: Really? I mean, I think all these boxes that I’m getting, I don’t know how green they are. How are they trying to out-green each other?

DYKSTRA: Well, UPS is trying out a new method of delivery – heavy-duty electric bikes that can carry trailers with up to 400 pounds of your stuff. They say this will reduce pollution and help them navigate more efficiently in urban areas.

DYKSTRA: That’s a lot of pedaling, except these are e-bikes, so there won’t be any pedaling involved. And the irony of all this, is that the city of Seattle, where this will be tested out, is where UPS started out in 1907, I’m sure we both remember it well. And UPS started as a bike-service, and now they’re a 21st Century bike service.

CURWOOD: Hey Peter, I don’t want to pop your bubble, but, you know, I don’t remember 1907. What else do you have for us today? 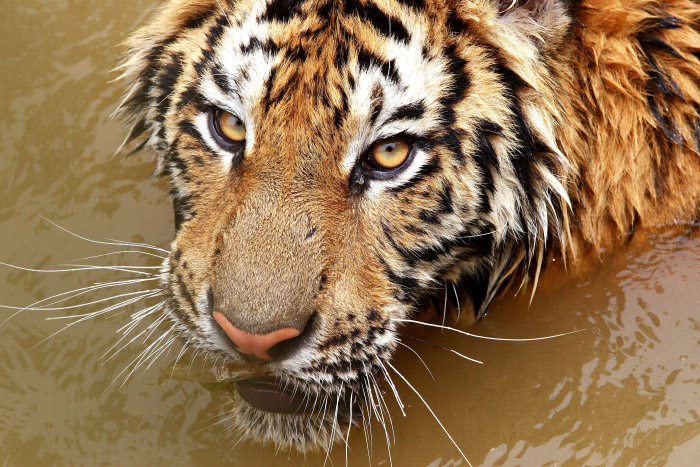 China has decided to reverse its 25-year ban on the trade of rhinoceros horn and tiger bone. Most often used in Chinese traditional medicine, China says these products will come from farmed rhinos and tigers. (Photo: International Fund for Animal Welfare, Flickr, CC BY-NC 2.0)

CURWOOD: Wait a second, but those are endangered animals. What’s going on?

DYKSTRA: Well, yeah, and there’s no mention in the official announcement of the status of tigers and rhinos. China says they can handle it. They say that this will be tightly regulated. They also say that they’re only going to take tiger and rhino parts from farmed animals.

CURWOOD: What sort of medical value do these things have anyway, for people?

DYKSTRA: The Western world, everybody outside the Chinese traditional medicine world, says they’re useless, they’re ornamental, they’re status symbols in a country with a rapidly growing middle and upper class. And no less than the World Federation of Chinese Medicine Societies agrees and says that tiger bone has no relevance to medicine and healing whatsoever.

CURWOOD: Let’s take a look back into the history vault now; what do you have for us today?

CURWOOD: Some kind of a dance?

DYKSTRA: A grand passage is when all of the waterfowl, ducks and geese by the millions take off on their southern migration all at the same time. There was one in 1940, there was one in 1955. The most recent was 1995, when a cold snap in Canada forced all of these ducks and geese up in the air, headed south in such numbers that they actually closed the airports in Kansas City and Omaha.

CURWOOD: So, I imagine this is what would happen back in the day of the passenger pigeon. 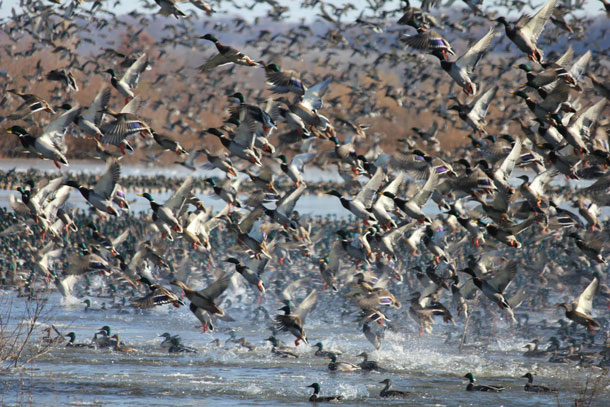 November of 1995 boasted the third recorded instance of something known as a “grand passage” – a massive, simultaneous migration of millions of waterfowl. (Photo: United States Fish and Wildlife Service, Flickr, CC BY 2.0)

CURWOOD: I guess not, Peter. Hey, thanks so much for taking the time with us today. Peter Dykstra is with Environmental Health News, that’s EHN.org, and DailyClimate.org. And we’ll be talking about the elections real soon.

DYKSTRA: Looking forward to it. Thanks, Steve.