Cool Fix For A Hot Planet: A Tiny, Carbon-Sucking Fern

Azolla is a tiny but fast-growing fern – and a voracious eater of carbon dioxide. (Photo: Richard Droker, Flickr CC BY-NC-ND 2.0)

Fifty million years ago, Earth was a hothouse, with carbon dioxide levels nearly ten times what they are today. Then along came a tiny but fast-growing fern called Azolla. Within a million years it had pulled trillions of tons of carbon dioxide from the atmosphere, cooling the Earth. Living on Earth’s Anna Gibbs explains how the carbon-fixing powers of Azolla might now be harnessed to help us cool the planet once again.

CURWOOD: Coming up a failed tsunami warning system has a catastrophic impact in Indonesia but first this cool fix for a hot planet with living on Earth’s Anna Gibbs.

GIBBS: Scientists from Duke and Cornell Universities recently led a crowdfunding effort to sequence the genome of a tiny fern called Azolla. They had a hunch that the ancient plant could help cool down our planet - for a second time.

Fifty million years ago, the earth was hot and thick with greenhouse gases. Carbon dioxide levels were nearly ten times what we see today. Heavy rain flooded the coasts, palm trees sprouted in Antarctica, and the Arctic Ocean was like a warm lake.

Then along came Azolla. It thrived in the nutrient-rich air and soon covered the oceans like a thick green carpet. Though minuscule, with leaves smaller than a gnat, Azolla can double its entire body mass in less than two days. To do that it sucks up a lot of carbon dioxide, which makes it an excellent carbon sink. Within a million years, Azolla pulled trillions of tons of carbon dioxide from the atmosphere. In fact, Azolla gobbled up so much carbon dioxide - nearly half the CO2 available at the time - that it helped cool the planet from an intense hothouse to the temperate climate we have today. Now scientists are researching the potential for Azolla to alter the climate once again. 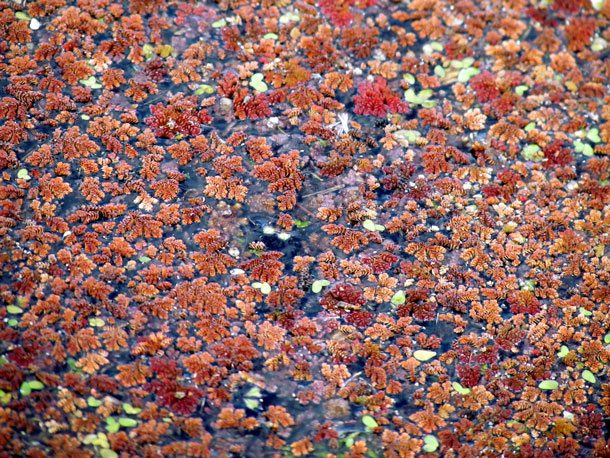 The Azolla range in color from green to reddish-brown or purple at the edges. (Photo: bobistraveling, Flickr CC BY 2.0)

And if averting catastrophic climate change wasn’t enough, Azolla has another trick up its sleeve: it’s an excellent natural fertilizer. In fact, Azolla has been used to fertilize rice paddies in Asia for over a thousand years, and researchers believe it could be used on other crops to decrease the need for toxic synthetic fertilizers.

And the list doesn’t end there. Azolla has the potential to be a natural insect repellant and even a sustainable food source.

In any case, it seems Azolla may be able to lend us a hand - albeit an extremely tiny one.

The study in Nature Plants