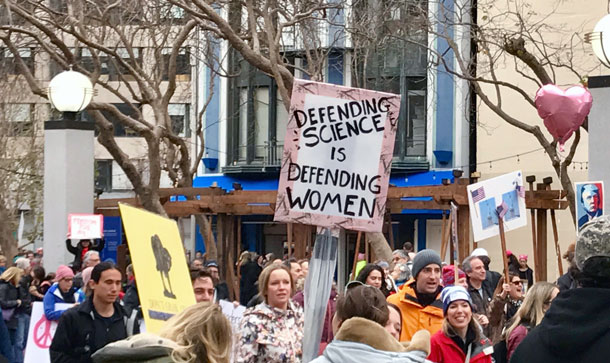 Climate scientists of all genders face harassment, bogus records requests, and even death threats. But women climate researchers are often subjected to sexist and misogynistic attacks as well. There are allegations climate-denying “lone wolves” and climate denial organizations may be linked to these efforts to silence climate scientists. Lauren Kurtz, the Executive Director of the Climate Science Legal Defense Fund, tells Host Bobby Bascomb about the kinds of harassment and threats her clients have faced and fought back against.

BASCOMB: The Me Too movement of women exposing the prevalence sexual harassment and assault, has made it’s way across the spectrum of American life from entertainment to media, and now famously again to US Supreme Court choices.

Sexual harassment also affects women working the STEM fields, putting science, technology, engineering and math degrees to work. But women only hold about a quarter of those jobs. And in a male-dominated workplace sexual harassment persists.

A recent study found that 58 percent of female academic faculty and staff working in STEM fields have experienced sexual harassment. And for women who work as climate scientists, harassment can be especially brutal, intensified by the polarized politics of climate change. Male climate scientists receive attacks and threats as well but for female climate scientists those attacks often have a sexist, even violent tone. To learn more we turn now to Lauren Kurtz. She’s the Executive Director of the Climate Science Legal Defense Fund. Welcome to Living on Earth, Lauren! 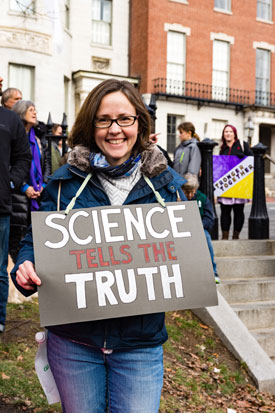 A protestor at the Boston Women’s March in 2017. A number of people who participated in this march, and corresponding marches across the country, were there to call out President Trump’s disparaging comments about science and women. (Photo: Jarred Barber)

KURTZ: Thanks so much.

BASCOMB: What specifically are some of the kinds of attacks that women in climate science face?

KURTZ: I think there's really two sorts of issues. One is the sorts of issues that all climate scientists face. These days it can be issues of government censorship, hostile messages on Twitter, e-mail, or voicemail. Things like misuse of state open records laws. And with women scientists, there can sometimes be this extra layer of hostility or aggression or discounting of the issues that has a flavor of sexism sometimes.

The second kind of attack they can face is just over outright sexism, rape, threats, sexual harassment, those sorts of things. We deal with less of the second part. We're really founded to deal with overall the sorts of attacks that scientists face, but we do sometimes have women scientists come to us and say my advisor groped me in the field, in which case, we usually try to refer them to someone who deals a little bit more concretely with those sorts of issues, or we get scientists who come to us and say I'm dealing with situation where I work for the government and my supervisor is no longer letting me talk to the press. And at times there's been a perception that they're not being taken as seriously or they're experiencing actual hurdles because of some sort of ingrained sexism. And again, these things can happen to male scientists but there's not the misogynistic overtones.

KURTZ: I have never heard of that one, and this isn't to say it hasn't happened, but that has not come to our doorstep anyway.

BASCOMB: I've read that studies show men are actually more skeptical of climate science than women. Why do you suppose that is, and how does that play into how female scientists are treated?

KURTZ: Yes, an interesting one. I will say that my experience is that people who reject climate science a non-zero amount of time often overlap with people who are also raging misogynists. In some ways it seems like they want to come back to a 1950s perception of the world where women knew their place, climate change was not an issue, America was an economic powerhouse, that sort of era. I don't know why that is exactly, but that does seem to be how things play out sometimes.

BASCOMB: Well, what recourse do climate scientists have when they receive these kinds of attacks? What can you actually do for them? 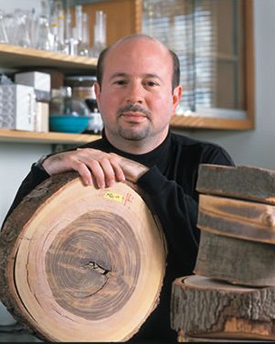 KURTZ: We have helped the scientists serve a restraining order someone who is leaving death threats on voicemail. We'll do things like will explore internal grievance channels. We'll also look at things like external whistleblowing complaints. When it comes to things like harassing messages on Twitter, there's opportunities perhaps to contact Twitter and let them know that they have a user who sending threatening messages. There's opportunity sometimes if there's ongoing litigation to help the scientists intervene so that they can have their voice heard in a larger issue. So, it really depends.

BASCOMB: To what extent do you think threats and attacks on climate scientists come from random individuals or are they sometimes orchestrated by larger forces, organized groups?

KURTZ: Yeah, so that's a really good question. It's actually both. There are definitely some lone wolf types who, for whatever reason or another, enjoy doing these sorts of things sending nasty e-mails or Twitter messages. The more insidious stuff though in a way I would categorize as organized.

KURTZ: Yes. So, we were formed actually to help scientists who get embroiled in bogus litigation, and that's a sort of thing that is unfortunately pretty well funded. There are several groups out there that as part of their mission to reduce the regulations surrounding the oil and gas and coal industries, they try to discredit researchers. Through that discrediting they can really get pretty hostile and invasive and harassing, and that sort of thing we know now is actually funded by the coal industry and the oil and gas industry.

BASCOMB: Can you give us some specific examples if you're willing to name names of the institutions that are funding this sort of harassment of climate scientists?

KURTZ: Yeah, so there are definitely a number of groups out there and they have been decently well covered in the news, in part, because a number of the people who have worked at these groups are now or have been at one point members of the Trump administration. There's a group called the Energy Environment Legal Institute. They use the legal system to target scientists. They'll try and do things like, in one situation, obtain 13 years of e-mails with a pretty blatant attempt to try and find something in an e-mail that they can use to take out of context and thereby seemingly try to discredit climate science as a whole. There's another related group called the Free Market Environmental Law Clinic they do basically the same things and work in conjunction with any legal.

BASCOMB: And of course climate scientist Michael Mann knows about that all too well. I mean that's exactly what happened to him right?

KURTZ: Yeah, so Michael Mann is a climate scientist who at one point was at the University of Virginia. He is now at Penn State. He was actually the first person that we helped. There was a group out there, in fact, the predecessor to the Energy Environment Legal Group. They tried to use state laws to obtain virtually every e-mail that he'd ever sent or received while he was a professor at the University of Virginia. It was something like 38,000 messages. I mean, surely if you hand a hostile party, 38,000 emails, some of which were just sent to you that you didn't write yourself, I'm sure there was a phrase or two in there that could be taken out of context. So, we were founded to help fight that. It was successful thankfully.

BASCOMB: Lauren Kurtz is the executive director of the Climate Science Legal Defense Fund. Thank you so much for taking the time to chat with me.

KURTZ: Thanks so much for having me.