US Tries To Boost Infant Formula 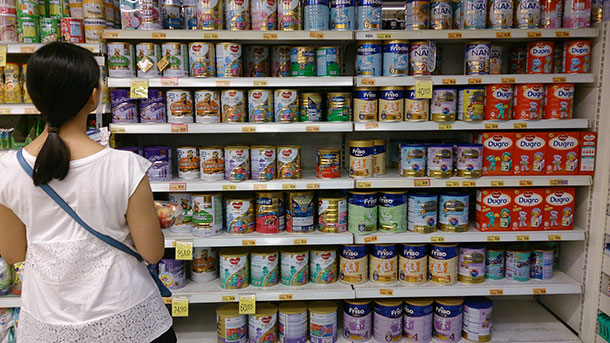 A woman shops for infant formula at a convenience store in Singapore. The proposed regulations would not limit the availability of manufactured formulas, just the marketing towards them. (Photo: ProjectManhattan, Wikimedia Commons CC0 1.0 Public Domain)

Breastfeeding came under fire at the World Health Assembly meeting in Geneva this past spring. The United States delegation mounted an opposition to proposed breastfeeding regulations that would encourage nations to limit the use of infant formulas and milk substitutes. Director of the Infant Feeding Action Coalition in Canada, Elisabeth Sterken, talks with Host Bobby Bascomb about the benefits of breastfeeding and the risks of aggressive infant formula marketing.

BASCOMB: When it comes to feeding newborn babies the science is settled: when possible, breast is best. Breast milk has a myriad of health benefits that formula simply can’t rival. That became clear in the 1970s when Nestle began to aggressively market formula in developing countries and ran ads implying it was just as good as breast milk. Breast milk provides nursing babies with antibodies to protect from some infectious diseases like malaria. Denied that protection, as many as 1.5 million formula-fed babies died across the developing world. Alarm about Nestle’s advertising ultimately led to the International Code of Marketing Breast Milk Substitutes in 1981. A resolution to strengthen the code was expected to easily pass at a recent meeting of the World Health Assembly. But the US delegation shocked participants by opposing it. Here to explain is Elisabeth Sterken. She’s Director of the Infant Feeding Action Coalition in Canada.

Elisabeth, welcome to Living on Earth!

STERKEN: Thanks, Bobby. I'm really pleased to be here with you.

BASCOMB: So, how did you become interested in breastfeeding? What got you involved in this work to begin with?

STERKEN: Well, when I graduated as a nutritionist, one of the areas that I was really interested in was infant and young child nutrition. And at one point my husband got a Commonwealth scholarship to do a PhD in Nigeria, and so I came along. And I was hired by one of the universities in the pediatrics department, and my role was to set up a unit for malnourished children. And this is where I firsthand saw the devastation of formula feeding in a developing country where the water, of course, is just not potable for mixing formula and where the cost is prohibitive and where it's just very, you know, very deadly to be formula feeding – and where breast feeding is so normal. And to see the sabotaging of breast feeding in that context really hit home for me. And then to see the high mortality and the high rates of malnutrition and dehydration and other side effects that this would cause. As a matter of fact, we called it baby bottle syndrome. 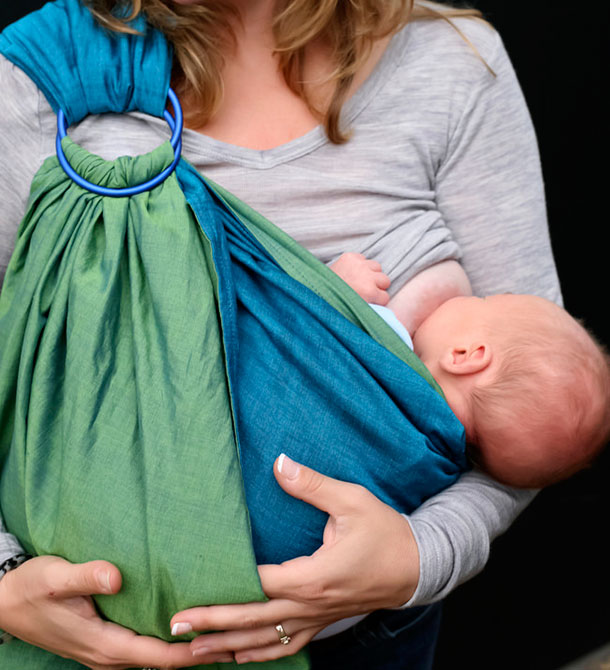 A mother breastfeeds her infant. The World Health Organization guidelines suggest that babies be breastfed for two years or beyond. (Photo: Hugabub, Wikimedia Commons CC BY 2.0)

BASCOMB: Wow. So, recently the World Health Organization met in Geneva, Switzerland. Can you tell me what happened in Geneva?

STERKEN: So, this year Ecuador had taken the lead on a new resolution which included the new guidance on ending the inappropriate marketing of foods for infants and young children. However, when the Trump administration got wind of it, they began to threaten the Ecuador government with economic sanctions, and so Ecuador was forced to drop the lead on this proposed resolution. And subsequently the Russian Federation took up the lead and the other countries continued to support this particular resolution.

STERKEN: Yes, for example, there's a lot of nutrition and health claims that are put in advertising, that are put on labels, to suggest that a certain ingredient that is put in the infant formula – such as DHA or ARA – will create better eyesight or create better brain development or better neurological development. So, the misleading advertising, the misleading statements, that are made about the formula rather then warnings about the fact that you've got increased diarrheal rates, you've got increased respiratory disease rates, you've got increased rates of obesity, cardiovascular disease, and various other long term consequences. So, formula feeding has not only the short-term consequences of infectious diseases, but also the long-term consequences for human health.

BASCOMB: So, what do you think was the US motivation for trying to water down the language promoting breast milk at the World Health Organization meeting?

STERKEN: Yes, well, we really have to see the marketing of breast milk substitutes as being in direct competition with mother's milk. The more formula you get into a baby's stomach, the bigger your profits, and if we look at the overall market of infant formula and baby foods, it's a $70 billion dollar market annually. So, the profits are huge. It's a huge incentive for these countries to see a weakened resolution.

BASCOMB: Well, shortly after this story came out, Trump took to Twitter and called this fake news. He said that, "The US strongly supports breastfeeding, but we don't believe that women should be denied access to formula. Many women need this option because of malnutrition and poverty." How do you respond to that?

STERKEN: Well, first of all, access is not a problem. The products will be available in pharmacies and supermarkets and shops globally. So, the International Code of Marketing of Breast Milk Substitutes does not restrict access, it restricts the marketing, the promotion of the products. And, of course, if you are living in poverty and you're suffering from malnutrition, it's an incredibly costly way to feed your infants. If the mother is malnourished, you want to support the mother nutritionally so that she can feed her baby. The Lancet estimates that roughly 820,000 lives will be saved when breast feeding becomes optimal. So, the death rate associated with artificial feeding – with formula feeding in the developing world – is disastrous. So, in areas of the world where malnutrition has a high prevalence and where poverty has a high prevalence, it becomes a deadly product.

BASCOMB: Well, to be clear, though, there are plenty of women around the world who simply can't breastfeed. They can't produce enough milk or they adopt a baby, and in those cases formula can be really vital for the baby's health. 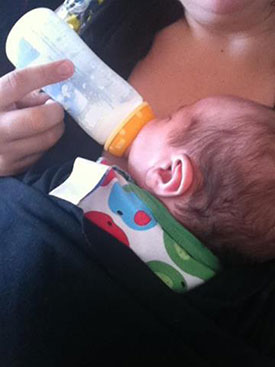 STERKEN: Yes, yes, of course. Formula is not a product that should not be out there. Formula should be a product that is used when needed, and then all the precautions that are needed in order to prepare and feed the products safely should be there, as well as good health monitoring of infants who are formula-fed. So, those conditions should be in place for mothers who are unable to breast feed or if a mother has passed away and the baby needs to be fed with formula. So, there are those situations where there is a need for formula.

BASCOMB: Well, let's back up a bit. Why does the World Health Organization say breast feeding is the best option for babies?

STERKEN: For many reasons, of course. First of all we know that IQ levels are higher, there are less neurological problems, there are far fewer deaths related to diarrheal disease and upper respiratory disease, and then, of course, the long-term outcomes of cancers, diabetes, obesity, cardiovascular disease, the non-communicable diseases. They also are much lower in a breastfed population. And of course, breastfeeding is part of our normal reproductive system that creates this very special relationship between a mother and her infant and young child, and of course, these are things that you could never reproduce and put into a tin can.

BASCOMB: This is obviously a very personal and sensitive topic for parents, but what do you see in the future for the infant formula industry and breastfeeding in general?

STERKEN: Well, we're really hoping, of course, that countries will become more assertive about implementing the barriers that prevent the aggressive and deceptive marketing in their particular countries, and really support mothers to make decisions to breast feed their children. To attack breast feeding is attacking mother’s milk and that is sacred, that is part of our reproductive means, and it's part of our – it’s part of how we survive.

BASCOMB: Elisabeth Sterken is Director of the Infant Feeding Action Coalition in Canada. Thanks so much for taking the time to talk with me.

STERKEN: Thanks so very much. I really appreciate it.

BASCOMB: A statement from Nestle says in part: “we strive continuously to improve our practices and we have revised and reinforced our policy on breast milk substitutes a number of times.”