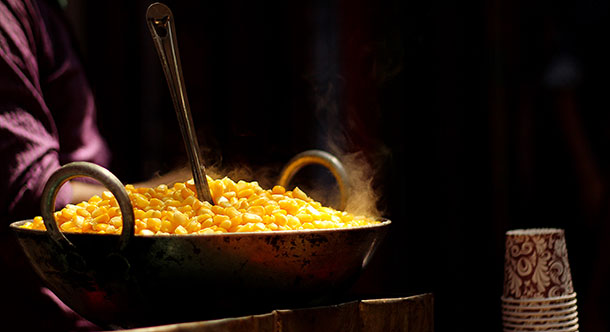 A local street vendor sells corn in Mumbai. Corn crop failures could spell bad news for the billions around the globe who depend on maize products. (Photo: Himanshu Singh Gurjar, CC BY-SA 4.0)

Corn, also known as Maize, is the world’s most produced food crop. But it is headed for trouble as the world warms. A new study published in Proceedings of the National Academy of Sciences finds that climate change increases the risk of simultaneous corn crop failures. Lead scientist Michelle Tigchelaar explains to Host Savannah Christiansen how different climate warming scenarios could impact global maize production.

CHRISTIANSEN: Organic or not, commodity grains such as corn seem to be heading for some trouble as the planet warms. That’s according to new research indicating that climate change will not only increase the risk of food shocks from world corn production but that these crop failures could occur simultaneously. We called up the lead author, Michelle Tigchelaar, a research associate at the University of Washington. Welcome to Living on Earth!

TIGCHELAAR: Hi. Glad to be here.

CHRISTIANSEN: So, first tell us why does increased warming lead to global corn crop failures?

TIGCHELAAR: Increased warming leads to global crop failures because plants are not really adapted to really high temperatures. So, most of our crops are really well adapted for our current climate. There is an optimum temperature at which they grow and beyond that their yields just decline. So, extreme heat has really negative impacts on failing of grains or on the flowering of crops and also increases their water usage. So, that's why really high temperatures are pretty detrimental for crops.

CHRISTIANSEN: And your study in particular, what does it say about by how much these corn crops will fail given the different levels of warming. 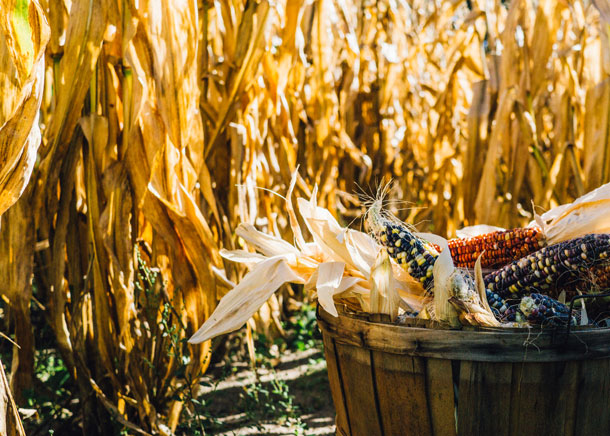 Corn is the most produced crop in the world and is used for food, livestock feed, and biofuel, among other uses. (Photo: Aaron Burden, Wikimedia Commons)

TIGCHELAAR: Yeah, so we decided to look at two warming scenarios. So, we looked at a world in which global mean temperature is two degrees Celsius warmer and we did that because it's sort of in line with the Paris Agreement target and then we also looked at four degrees warming which is what we would get roughly towards the end of this century if we don't really change anything in how we act as humans on this planet. And what we found is that for two degrees of warming, corn in particular, in the main growing regions on Earth, would decline by about 20 to 40 percent and in a four degree warmer world that would go up to 40 to 60 percent declines in yield.

CHRISTIANSEN: So, one of the more ambitious goals set out during the Paris climate accord was to keep warming to 1.5 degrees Celsius above pre-industrial levels, but we're more on track to hit two or three at this point within the next several decades. How do the impacts on corn crops change as the temperature rises?

CHRISTIANSEN: Why look specifically at corn, or maize as it is otherwise known. Why is this crop so important? 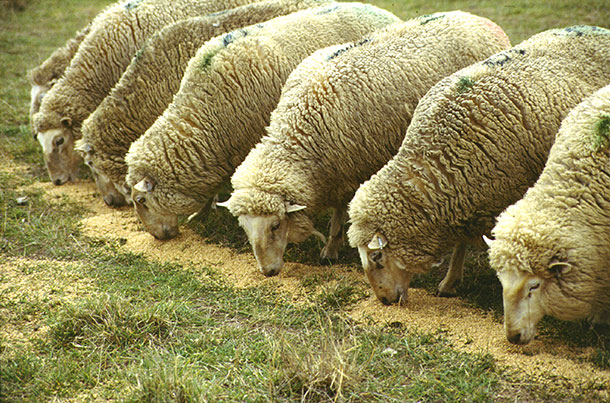 Among its many uses, corn or maize is commonly produced as feed or fodder for livestock, such as sheep. (Photo: CSIRO Science, CC BY 3.0)

TIGCHELAAR: Corn is currently the most grown crop in the world by volume. I think wheat is the most grown by area. And corn has many different uses. So, it's used as livestock feed. It's used for sugar. It's used for direct human consumption, and it's also used as biofuel. So, there's multiple different end purposes for corn and as a result it's a very important component of international food market, so international grain trades, and also what is interesting about corn is that there are just a few countries – so, roughly four -- that really grow the bulk of all the corn in the world. So, that makes a system very vulnerable to crop failures in just one or two regions.

CHRISTIANSEN: And briefly could you just tell us what are those major corn-growing regions in the world?

TIGCHELAAR: Yeah, so it's the US and China and the Ukraine and Brazil and Argentina.

CHRISTIANSEN: How important is corn to the global economy, specifically in how it is used for biofuels?

TIGCHELAAR: What I found really interesting...I learned in this process is that economic policy has a really big role in determining how these sort of price shocks associated with these crop failures play out. So, an initial crop failure on its own would initiate a small price shock, but it's really what individual countries do in response that determines what happens in the international market. So, I believe in 2007 and 2008 we had a major food crisis worldwide and prices then really soared because countries just closed off their markets and decided not to export anymore. And that really ended up driving up prices. And the fact that you mentioned biofuels is really interesting because these biofuel mandates in the United States, they sort of lock up a certain part of the corn crop so that means that then it already has to go to biofuels and can't really go to anything else, and so you have less of a margin to play with in terms of other uses. So, biofuel mandates have driven up prices in the global market.

CHRISTIANSEN: So, how would corn failures impact different people around the globe? In other words, who will be hit the hardest if these failures happen? 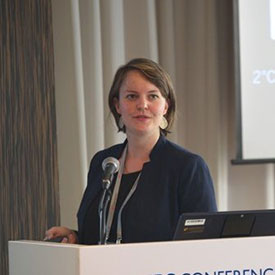 TIGCHELAAR: So, obviously one group of impacted people is farmers, people who grow these crops; though I should say that here in the United States we have crop insurance programs so that may be able to mitigate some of the financial effects. I think globally the people who would be impacted most by this are people who spend the majority of their income on food and spend it on food that is traded in international markets. So, these would be poor urban consumers worldwide, and so that's mainly in developing nations and that is really unfortunate because those people generally tend to be most vulnerable to climate change to begin with.

CHRISTIANSEN: What are some of the technologies that we might need both on a national and international level to keep these sort of crop failures from happening? Or to help people recover if they do happen?

TIGCHELAAR: Yes, so to some extent there is some adaptation that farmers may be able to do, and something that our study didn't look at was the extent to which for instance growing regions would be able to shift. So, already we see that wheat is expanding northward, and so we might be able to now soon grow corn in places that we couldn't grow it before, and similarly farmers might decide to shift their planting dates to sort of avoid the hottest time of the year. But ultimately especially if you look at a four degree warmer world, what we would really need is crops that tolerate heat better, and this has been a breeding target for the last couple of decades. So, international maize and wheat organizations have been looking at breeding crops that are more tolerant to heat, and so far they have not been able to do it. So, this is a really difficult trait to breed into crops and it should be a major effort, but it's also a little disconcerting that they haven't achieved that yet.

CHRISTIANSEN: Michelle Tigchelaar is a Research Associate with the University of Washington. Thanks so much for talking to us today.

TIGCHELAAR: Thank you. It was a pleasure talking with you.