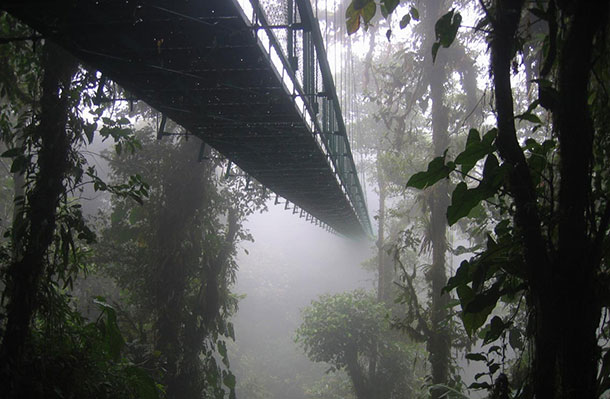 The Central American nation of Costa Rica will be fossil fuel free by 2021, according to its new President, Carlos Alvarado. The nation’s cloud forests spur a culture of sustainable travel and ecotourism. (Photo: Dirk van de Made, licensed under CC BY-SA 3.0)

On this week’s Beyond the Headlines, Host Steve Curwood and Peter Dykstra discuss the Chesapeake Bay’s improvement of ecosystem health and Costa Rica’s pledge to go fossil free by 2021. Finally, the pair step back into history and recall NASA scientist James Hansen’s testimony before then-US Senator Al Gore (D-TN) on the dangers of climate change, thirty years ago.

CURWOOD: Let’s take a moment now to look behind the headlines with Peter Dykstra. Peter’s an editor with Environmental Health News, that’s EHN.org and DailyClimate.org. On the line now in Georgia – Peter, what’s going on down there? It’s plenty hot here outside of Boston.

CURWOOD: Wow, that’s great. So, how did they do this? What fixed the Chesapeake Bay, or got it better, anyway?

DYKSTRA: Well, the Chesapeake is dealing with pressures from urban growth. The population around the bay in places like Washington and Baltimore and Richmond and Norfolk Virginia has doubled since 1950. There’s also huge farm runoff from dairy farms in New York state and Pennsylvania, poultry farms in Maryland and Virginia. They’ve all really beaten up the bay. Seafood, like oysters and crabs, are declining. But a massive federal cleanup program is really hitting the mark and is making a big difference.

CURWOOD: Okay, you said you had two items of good news. What’s the other one? 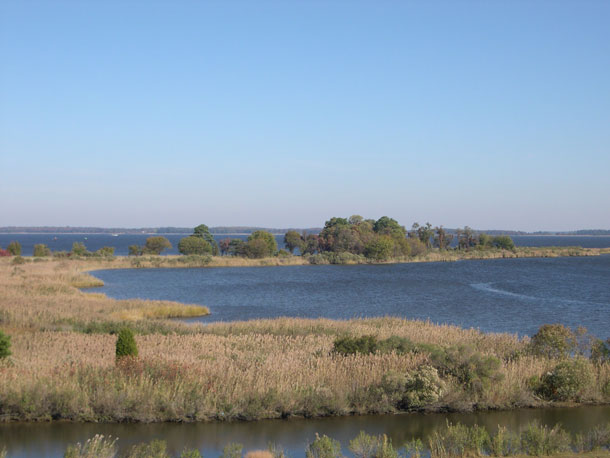 The Chesapeake Bay Watershed area is known for its oyster and crab industries and its estuary systems. Pictured here is a tidal wetland area in the Bay. (Photo: Jennifer Schmidt)

DYKSTRA: Yeah, here’s a little more. There’s a new president in Costa Rica, elected in May. His name is Carlos Alvarado, and President Alvarado has set a really lofty goal for his environmentally-conscious country. He calls it “a titanic and beautiful task,” and they want to have fossil-fuel-free Costa Rica by the year 2021, which would also be the nation’s bicentennial.

CURWOOD: Woah, that’s ambitious. How are they going to do that?

DYKSTRA: Critics say they aren’t going to do it, or at least they’re not going to do it in less than three years. But, they’ve got a head start on environmental programs and everything from ecotourism to clean energy. If any country can do it, Costa Rica may be the one.

CURWOOD: Indeed, they’ve been certainly iconic in that ecotourism, haven’t they? Okay. Now we’re going to take that walk down the halls of history and you’re going to tell me about…?

DYKSTRA: I’m taking you back thirty years to June 23rd, 1988 to Jim (James) Hansen, the climate scientist, and his historic testimony before a senate subcommittee. It was a scorching hot day in Washington, and Hansen’s predictions about climate change, ones he had made before, but they really hit home and made news. 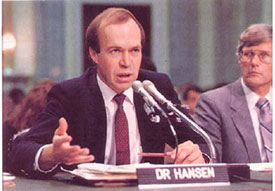 CURWOOD: That hearing, as I recall, was chaired by a young senator from Tennessee named Al Gore.

DYKSTRA: Right. Hansen and Gore had been in a neck and neck race for thirty years to see who could be the most criticized and reviled for being right.

CURWOOD: And what does Jim Hansen think about that scene from 30 years ago?

DYKSTRA: He’s really sorry that he turned out to be right. He’d much preferred to be wrong. I would have to agree with that. I have been following these issues for a long time. The science is compelling. But I would be more than happy to have all of the scientists and all of the journalists who have written and talked about this for years get some egg on their face and be completely wrong. Let me give you one more bit of pop culture trivia about Jim Hansen’s office at Columbia University. It’s upstairs from the iconic diner that was featured in episode after episode of the Seinfeld show.

DYKSTRA: No, that’s a different restaurant. So, no soup for you!

CURWOOD: And there’s more about these stories at our website loe dot org.