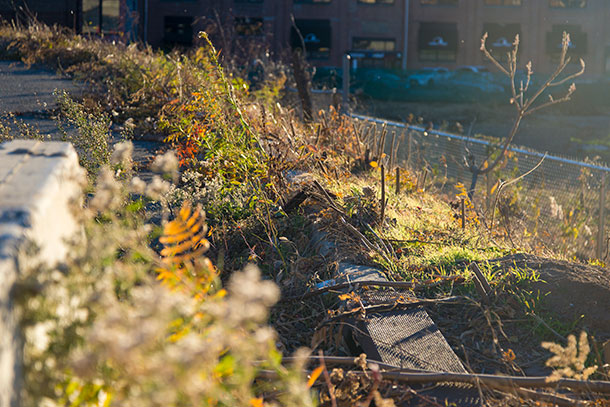 Looking this week’s Beyond the Headlines, Peter Dykstra and Host Steve Curwood discuss the new life that’s being given to a notorious Superfund site in Toms River, NJ, as an open-air classroom for local high school students; and they consider the ongoing hostilities over water between Texas and New Mexico. The weekly history lesson features a flash back to June 17th, 1942, when FDR directed the US Army to build the first atomic bomb, a project later known as the Manhattan Project.

CURWOOD: Let’s look behind the headlines now with Peter Dykstra. Peter’s with Environmental Health News, that’s EHN.org and DailyClimate.org down there in Atlanta, Georgia. It’s getting hot here in New England – what about you, Peter?

CURWOOD: So, what do you have for us today?

DYKSTRA: Let’s go back to my ancestral home, the state of New Jersey, specifically to Toms River, down on the Jersey shore. It was the site several years ago of a Pulitzer-Prize-winning book by environmental journalist, Dan Fagin – title of the book is also Toms River – about the toxic waste sites throughout the community that had poisoned drinking water wells and caused cancer clusters. But right now, at the biggest of those sites, the Ciba-Geigy corporation’s now closed-down plant where they made dyes and plastic resins, there’s an open-air classroom for high school students going on.

CURWOOD: Open-air classroom? Sounds a little risky to me in a Superfund site.

DYKSTRA: Well, they’re actually focusing on the non-polluted part of this very, very large factory site. They’re counting deer using remote cameras, and it’s a small gift back to the community from the current owners, the BASF company. But there’s still serious problems with the site and others in the area. 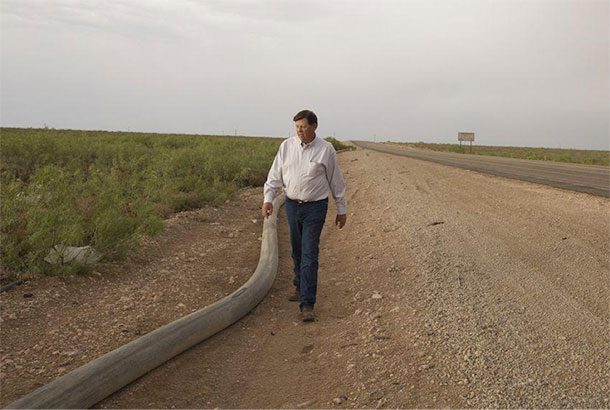 New Mexico State Land Commissioner Aubrey Dunn walks along Ranch Rd 652 at the Texas-New Mexico border on May 23, 2018, next to a water line that runs from Loving County, Texas, to Lea County, New Mexico. (Photo: Marjorie Kamys Cotera for The Texas Tribune)

CURWOOD: So, it’s gotten better, it sounds like, huh?

DYKSTRA: It’s gotten a little bit better. The ocean-discharge pipe that took waste from the plant all the way out into the Atlantic Ocean many miles away and dumped it there has long been shut down; the plant has long been shut down. They’ve removed a lot of the barrels from the site. But there’s still leaching of toxics into the Toms River, into the surrounding environment, and there are drinking water wells that will probably never be able to be used again.

CURWOOD: I guess that’s part of the lesson to students that some pollution is forever. Hey, what else do you have for us?

DYKSTRA: Let’s go to the state line of Texas and New Mexico. There’s a water war going on there. Water wars are nothing new. The two states have had them over the Pecos River and its water, over the Rio Grande. But this one is over an aquifer and use of the water for fracking. There’s been a huge fracking boom in the area. New Mexico regulates pumping out of the aquifer. Texas doesn’t. If you own land, you can take as much water out of the aquifer as you possibly want. And what the Texans are doing is selling some of that water back to New Mexico to feed fracking operations.

CURWOOD: Oh, I imagine the New Mexicans aren’t very happy. This is going to touch off a bit of a battle, I would say. And there’s that old saying out West: whiskey’s for drinking but the water’s for fighting.

DYKSTRA: That’s right, and this looks like a fight that’s going to go to court or going to go through the state’s legislatures for some time to come.

CURWOOD: So, open that door to the history vault, Peter, and tell me what you see inside. 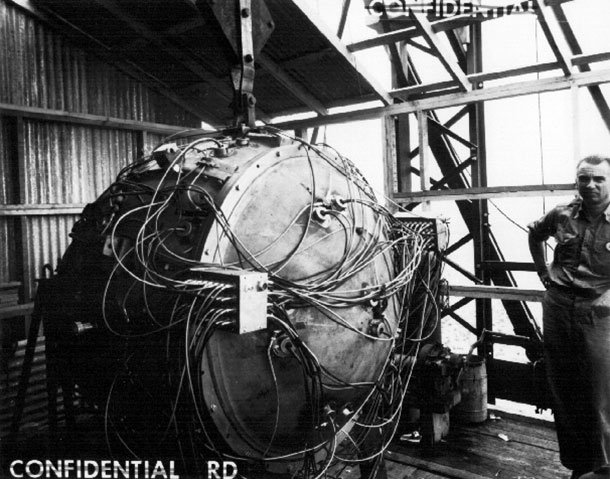 In 1945 the explosive device known as “Trinity” was assembled for the first atomic bomb test. (Photo: U.S. Government, public domain)

DYKSTRA: June 17th, 1942. President Franklin Delano Roosevelt, in the middle of World War II, directs the US army to take charge of bomb making in the race for an atomic bomb against the Nazis. Two months later, the Manhattan Engineering District is formed by the Army Corps of Engineers, named after the apartment in Manhattan where some of the early planning went on. But of course, most of the work took place in that same state of New Mexico.

CURWOOD: That’s where they exploded the first atom bombs. Hey, it cost a lot of money back then. What’s happened to that now?

CURWOOD: Oh my. Thanks, Peter! Peter Dykstra is with Environmental Health News, that’s EHN.org and DailyClimate.org. We’ll talk to you again real soon.

DYKSTRA: Ok Steve, thanks a lot. Talk to you soon.

CURWOOD: And there’s more on these stories at our website loe.org.

Texas Tribune: “New Mexico official says Texas landowners are ‘stealing’ millions of gallons of water and selling it back for fracking”